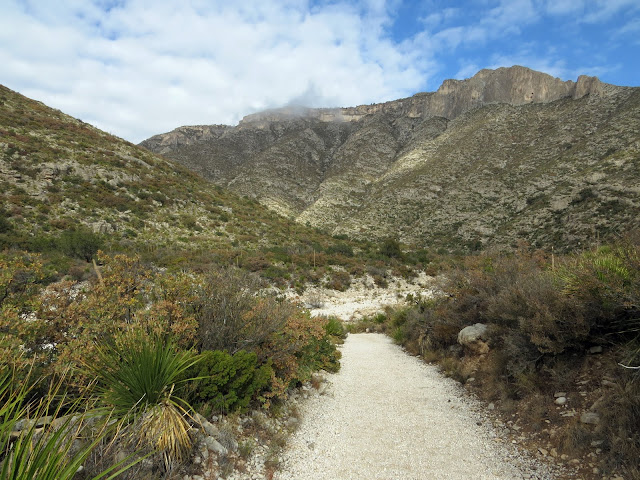 While I was messing around on the McKittrick Nature Trail the morning fog lifted up out of the canyon, the main attraction here, so now it's time to quit farting around and get on with the primary hike of the day. And with the looming Thanksgiving holiday chasing me towards home this will be my last hike in Guadalupe Mountains National Park, at least for this trip.

And yes, that trail is very white, but it hasn't been trucked in. The rock and gravel here in the bottom of the canyon, as it is in the bottom of all the "wet" canyons of the park, is naturally this color due to a coat of calcification, so this is what you get when the vegetation is worn away by water or cleared by man. 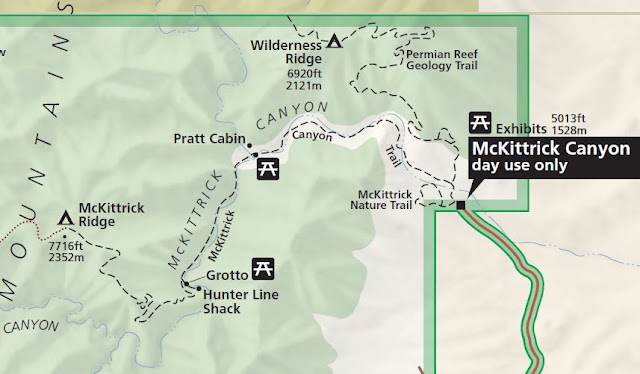 The destination for this hike is the Hunter Line Shack, about 4 miles up the boomerang-shaped canyon. 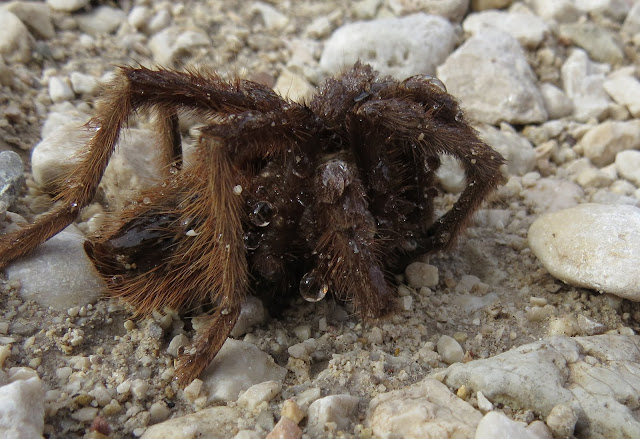 Normally tarantulas hide out in burrows during the day, but in the fall, primarily October although this was late November, the males wander around in the daylight looking for love. But it was still pretty chilly when I came across this guy right in the middle of the trail trying to warm up enough to get his groove on.

I suppose the ability to collect moisture on the hairs of your body is a good thing in the desert, but today it just looks like it would make him colder. 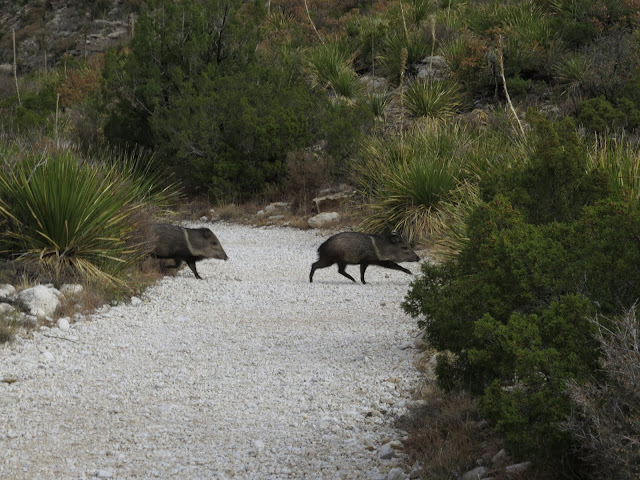 McKittrick Canyon is the intersection of a variety of habitats making it a diverse place. Here I was still in the early stages of the hike, in the mouth of canyon where it widens out just before spilling into the Permian Basin.

I was being my usual quiet self, which took some extra care since one of my hiking sticks had suffered a blowout back in the Dragoon mountains (More on that in a later post) which makes it click if not set down carefully, when I heard a bit of a commotion in the scrub and stopped. Moments later these peccaries, or javelins depending on where you're from, decided to cross the road without looking.

Of course the leaders of the pack spotted me right away and, with an extra burst of speed completed the crossing quickly, warning the others, and me, with much clicking of their tusks.

Peccaries have never been successfully domesticated like their close cousins the pig because of their aggressive nature and have been known to kill humans with their short, straight, and very sharp tusks used solely for defense.

But fortunately for me I apparently didn't come across as a particularly dangerous predator and they kept on going. 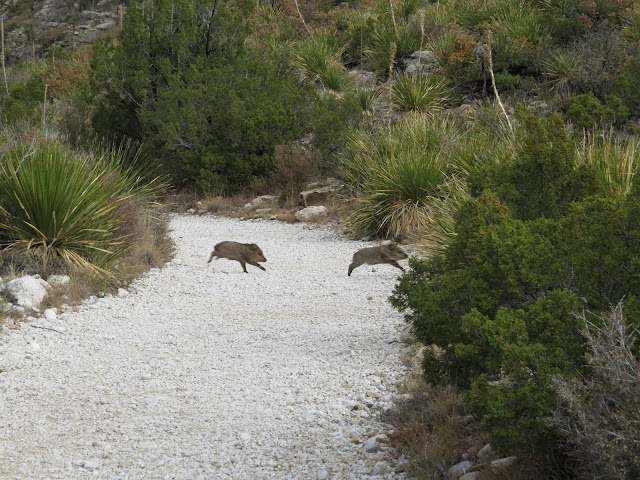 Soon to be followed, rapidly, by these little ones that, in their haste, were doing their damnedest to avoid actually touching the trail as they flew across. 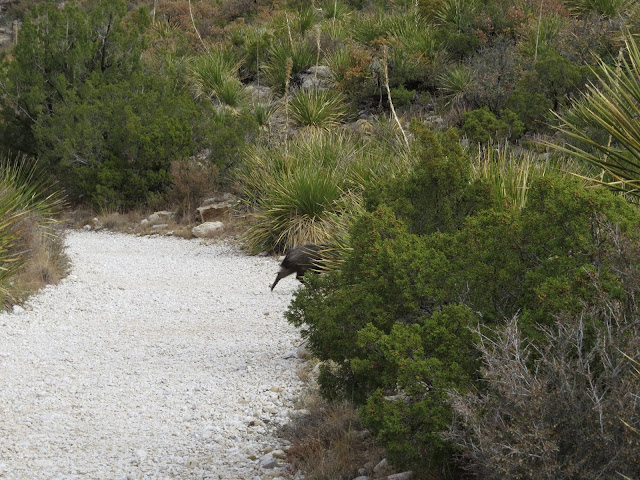 And in a flash tail-end-Charley was across the trail, clearing the way for me to continue. Though I stayed put for a while just to make sure there wasn't going to be a crossing incident. . . 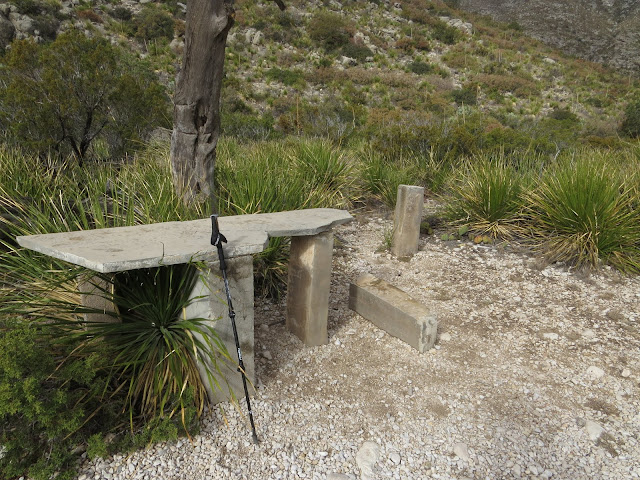 A little farther along I came across this curious thing. Curious not only because of it's unusual construction, but also because it was clearly too high to be a bench. At this point I wasn't sure what the heck a table made of rock slab and pedestals was doing out here all on it's lonesome.

Further on I came across similar constructions at both the Pratt Lodge and the Grotto, except these also had bench-sized stone constructions next to them.

Not sure what happened to the benches for this table sitting less than a mile from the parking-lot. I'd like to think that people didn't just walk off with them for the hell of it, but - well. . . 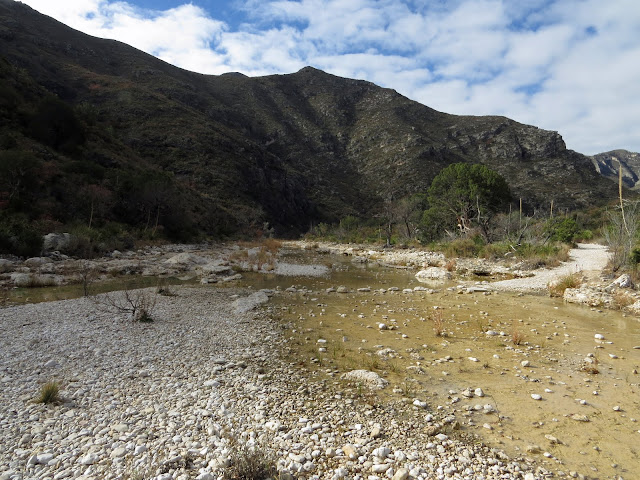 Just as the walls closed in and I entered the clutches of the canyon proper the trail crossed McKittrick Creek and here, unlike back at the visitor center, the water is flowing above ground.

This is one of three crossings, one dry not far from the visitor center, this one, 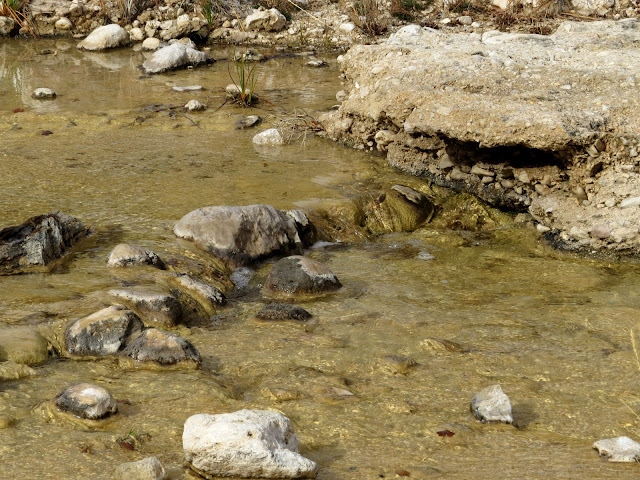 and the third, also wet, prior to reaching Pratt Lodge.

I actually saw small, really small, rainbow trout in some of the deeper pools along here. 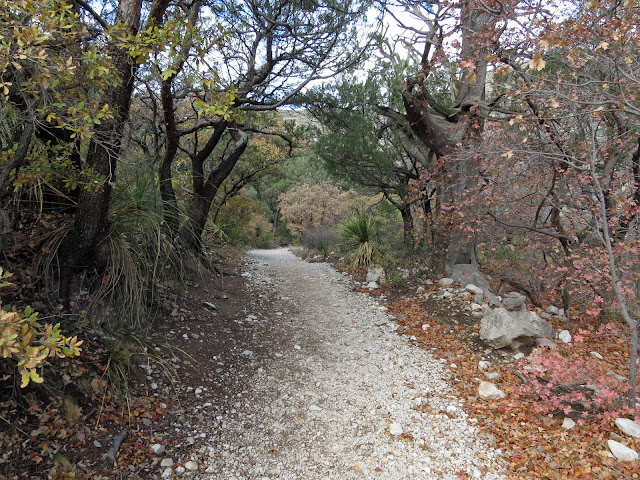 After the third crossing, even though I have gained very little elevation since leaving the trailhead, the forest, sheltered here in the deep canyon, starts closing in around the trail 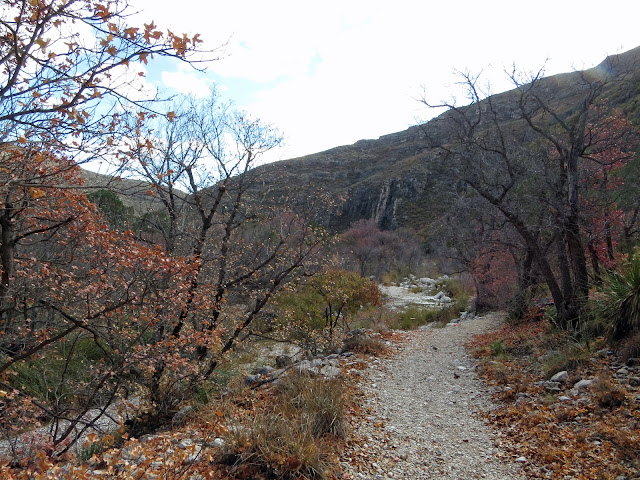 and,though I was a little late for peak color, it's easy to see why this hike is 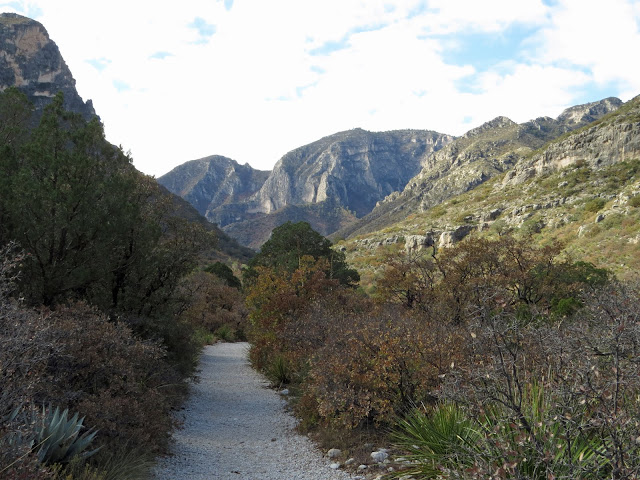 a favorite in late October - early November for fall color. 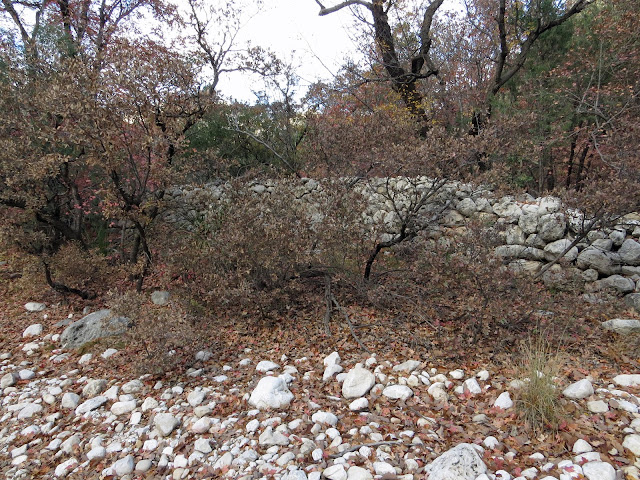 It almost went by unnoticed since it's made from native rock, but this rock wall slinking alongside the trail marks the approach to 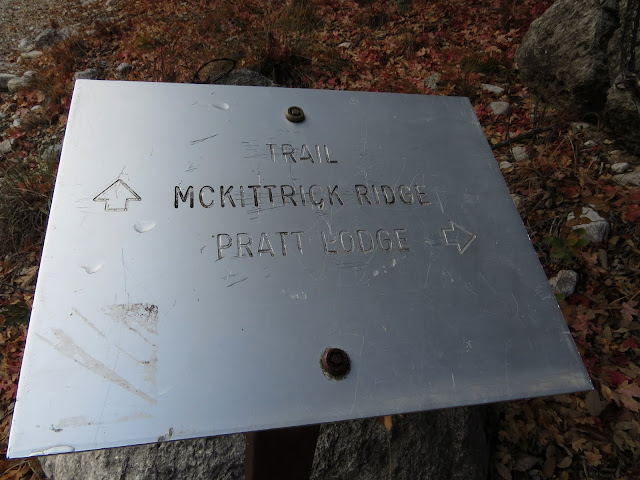 the short spur to the Pratt Lodge which is located at the confluence of the north and south branches of the McKittrick river. 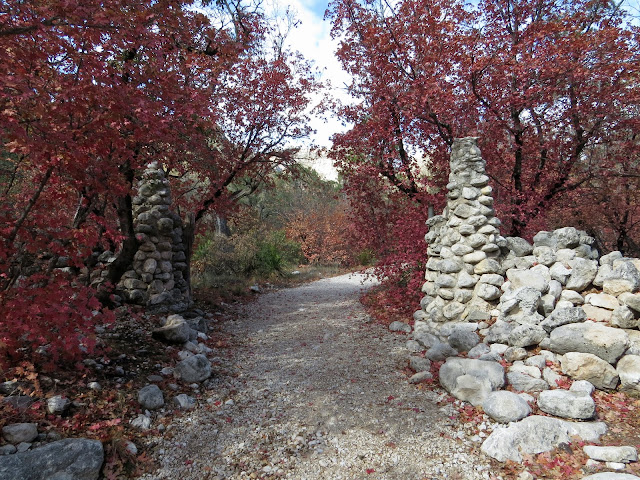 The lodge is approached through this rather spectacular entry.


appears through the trees.

There are some info-sheets here inside the back door but they didn't photograph well through the wire protecting the glass. One of them is some excerpts from the letter the Pratts sent to the National Park Service describing the location and construction of the lodge.


The lodge was built entirely of wood and stone, including the roof.

Can you imagine being one of the roofers that had to haul those slabs of stone up there and mortar them into place? 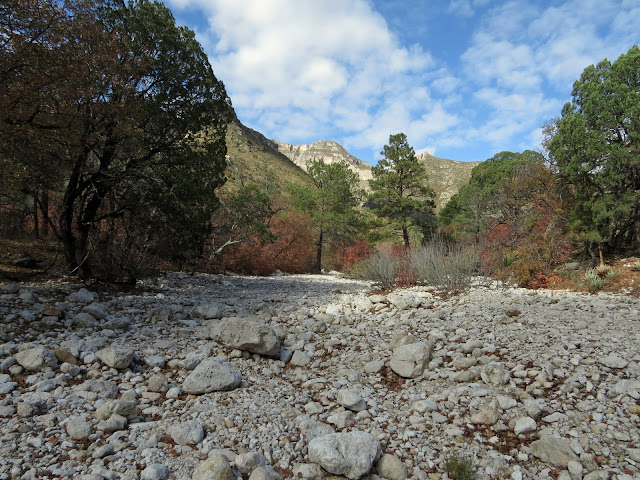 For many that come up this way the Pratt Lodge is their turnaround point, but there is more to see just a little further up the canyon along the south branch of the river,

though this little guy was reluctant to let me past.

He was small, only old enough to have a single node to his rattle, indicating just one molt so far in his life, but the venom of these little guys is, drop for drop, more potent than that of his elders.

I would have just gone on around him but he was sitting in the middle of the trail and I could hear a group of hikers coming up behind me and was concerned that they may not notice him.

A valid concern since, despite standing right smack-dab in the middle of the trail as I guarded over him and cautioning the hikers as they approached, I had to throw up a hiking stick to keep the dad, completely oblivious of the situation and apparently thinking I was just being difficult, from just plowing on by and stepping on him.

After shepherding the family-group safely past I hung back with the serpent for a while. Not because he needed anymore protection, once disturbed he proved was perfectly capable of moving out of the way on his own and finding a better sunning spot, but to regain some personal space since those hikers were going the same direction I was. 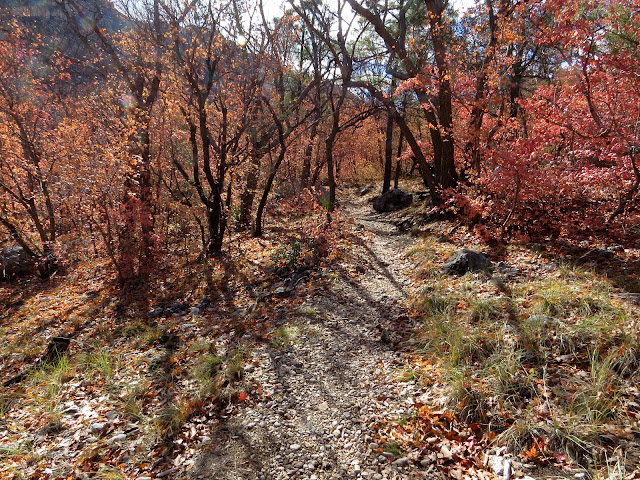 But I was content to make my way slowly through this engaging landscape while they plowed on hastily, and noisily, almost like they were paying by the hour to be out here. 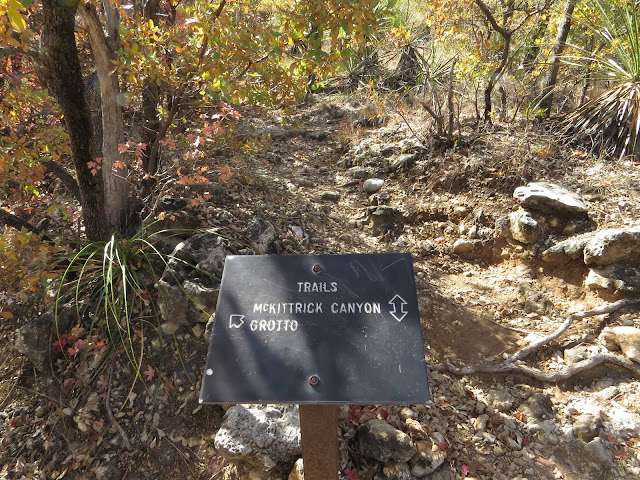 About a mile and a quarter beyond the Pratt Lodge there is a choice to make. The McKittrick Canyon Trail continues in one direction while the Grotto and, a little ways beyond that, the Hunter's Cabin are off to the left down a short stub of trail. 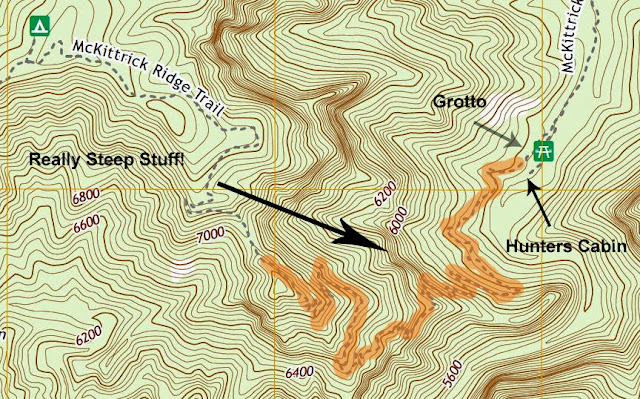 And again, when I say up I mean up in the literal sense.

So far on this trail I've barely climbed 200', but those in the know generally agree that this next 1.25 mile stretch of trail is the toughest in the park. Mostly because in that 1.25 miles it climbs over 2200' on a trail with some rather dicey sections.

An interesting challenge, but - well, maybe another day. . . 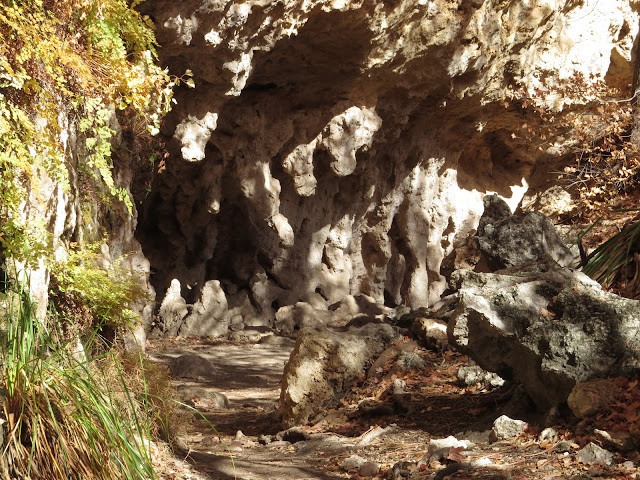 Shortly after taking the easy path I come to the Grotto.

A sort of above-ground cave formed by water seeping down through the limestone above into a funnel-shaped opening that runs about 15 feet back into the mountain.

I couldn't get a photo of the insides because - well, remember that family that passed me? They were now all crammed into the depths of the Grotto and showed no sign of leaving. And when I came back this way later, a young and rather amorous couple, officially a pair of  teenisamoris, had taken up what appeared to be a long-term residence in the same spot. 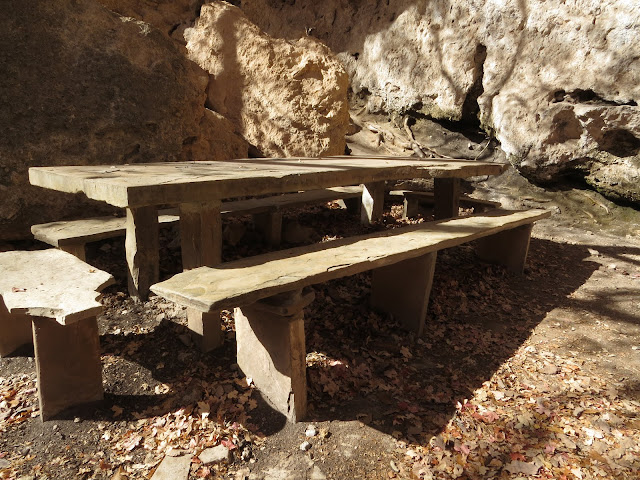 But in case I was willing to wait for who knows how long for them to get over themselves, there are a couple of those beefy stone tables here at the Grotto. 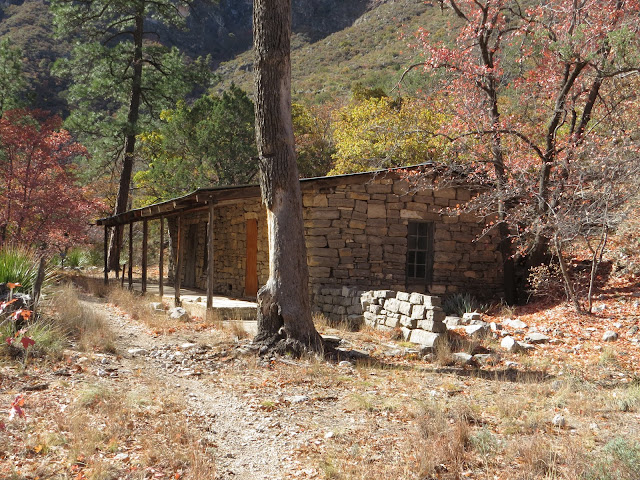 And finally, I'm at what amounts to the end of the trail. At least this bit of trail. 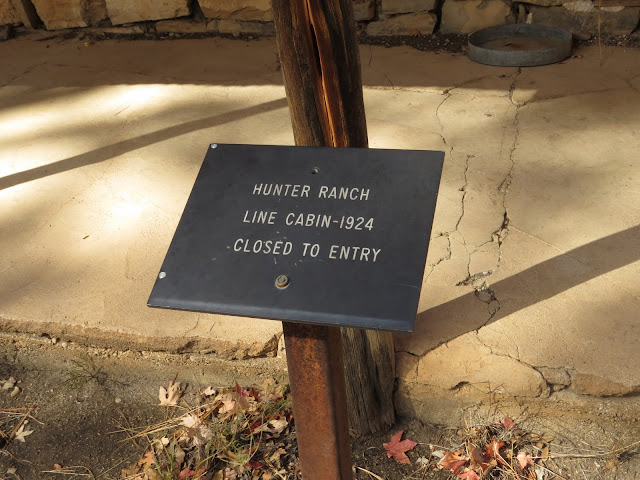 The Hunter Line Cabin, also built by the Pratts of stone and wood. 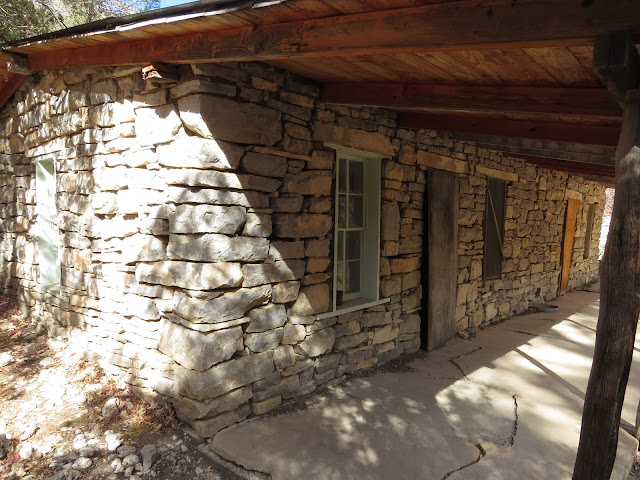 Again, I couldn't get inside the building, but who needs to with a porch like this? 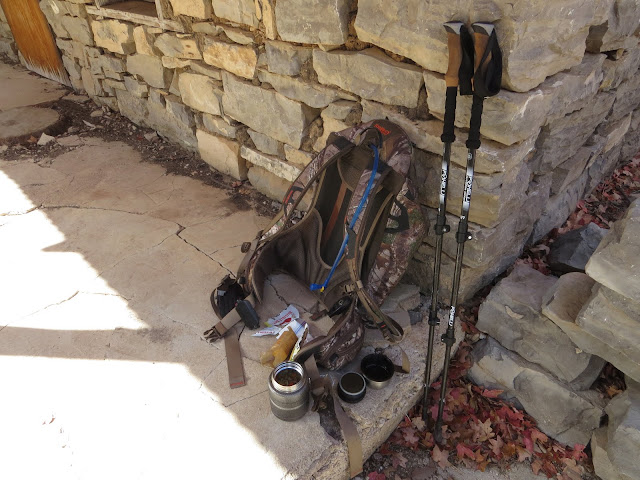 I had a perfect place for lunch 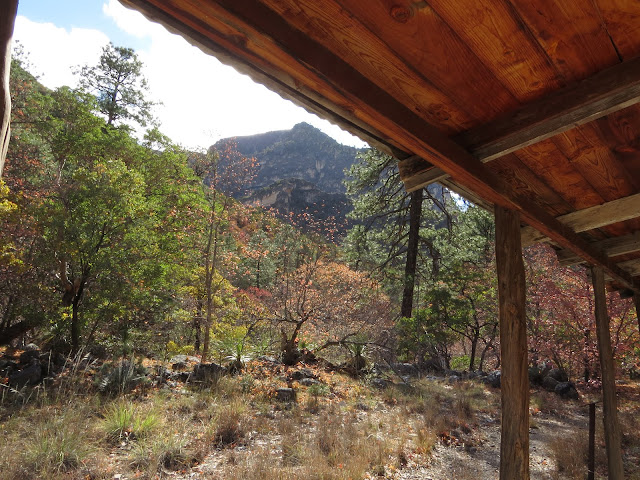 and asking for a better view would just be greedy.