A portion of today's hike was off-trail and I debated over whether to include a map of my track or not.

Over the years I've seen too many good places ruined by publicity. 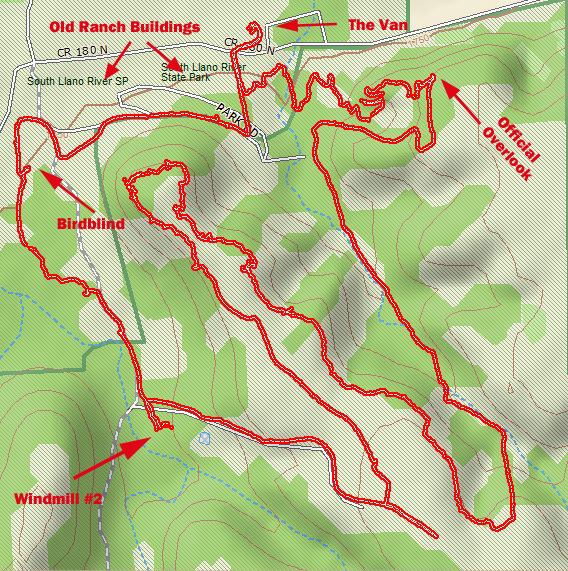 But it's not like I have that many readers, and this is one of those lightly used parks where off-trail hiking is not discouraged and anyone that studied the trail-map would notice this trail-challenged spot that just begged to be explored, so I'm throwing in the map anyway. 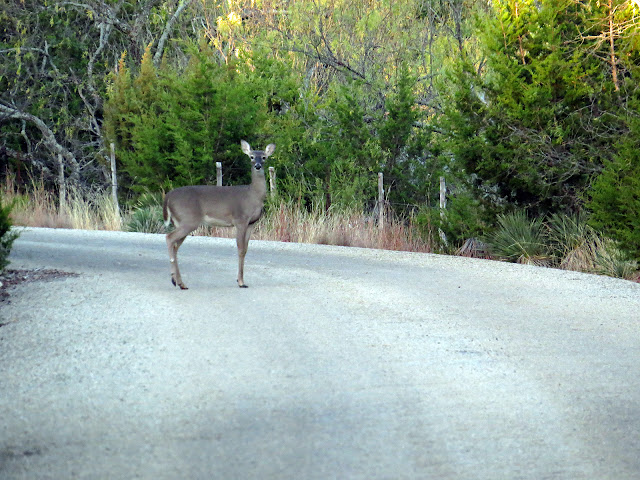 I had just barely gotten started when this lady, rather belligerently I thought as she stamped her foot at me, wanted to know what the hell I thought I was doing out here at this hour, and how dare I disturb her morning routine! 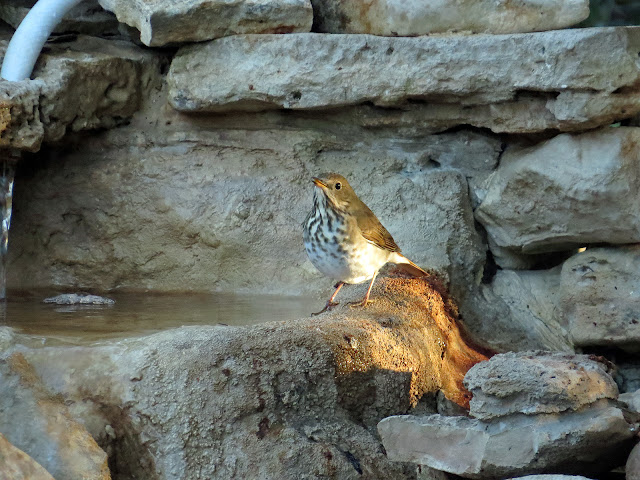 The next stop was the birdblind, because the sun had just cleared the horizon and was throwing that quality of light that only lasts for a few minutes, so why not? 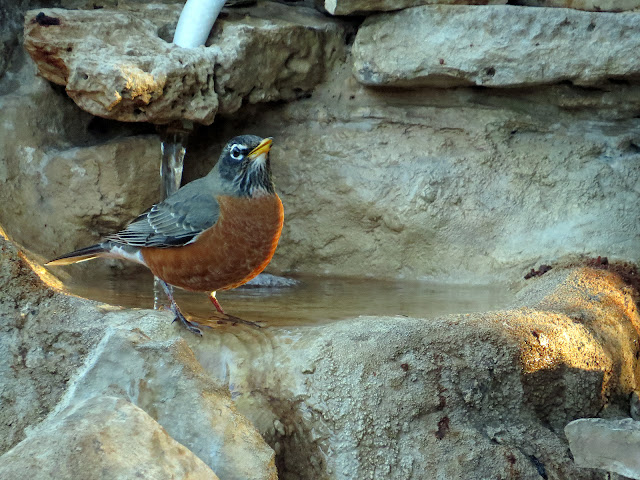 All the birdblinds, there's four of them scattered around the north end of the park, have outside as well as inside viewing areas which is nice in these COVID times when some of us are even more suspicious of enclosed public spaces than usual. 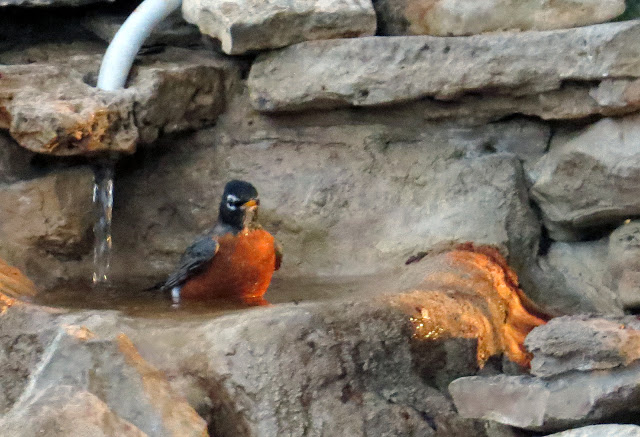 Oh No Dude!  Don't you know how cold it is out here? 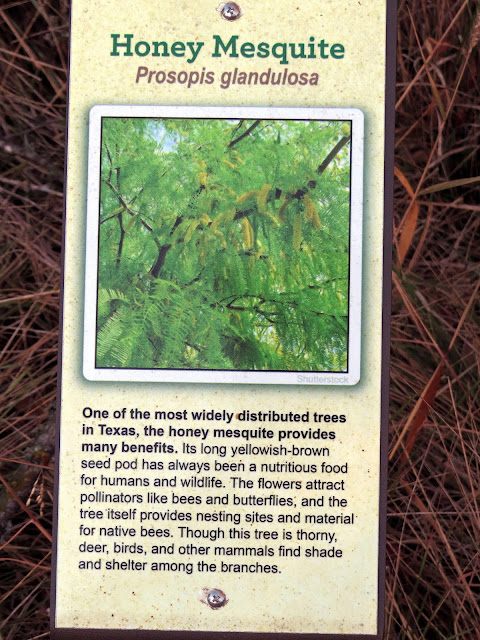 Then, after a wander down the nature trail re-reading all the info-plaques - you know, in case they put out a new one since yesterday - 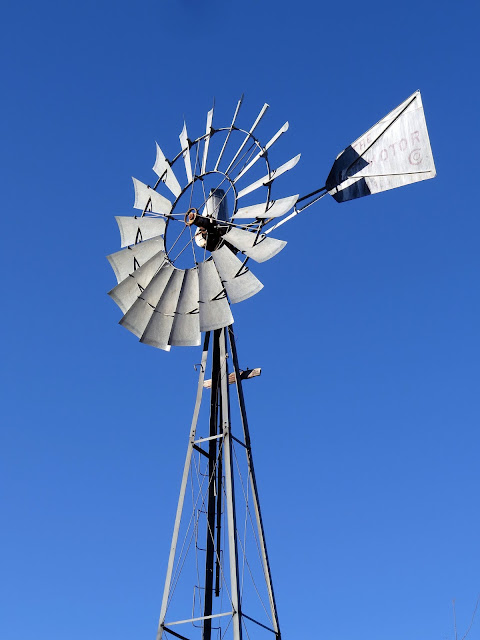 and a short detour to yet another windmill at what used to be the ranch's main livestock holding and processing area, I hit the steep climb up the East Ridge Trail towards - well - the East Ridge.
Years ago there used to be a faint two-track diverging north off of the East Ridge Trail that petered out within a half mile into a confused jumble of game-trails that themselves petered out.
Today that two-track has just about faded away into obscurity. In fact, even though I knew about where it was, and was looking for it, I missed it the first time and had to backtrack. 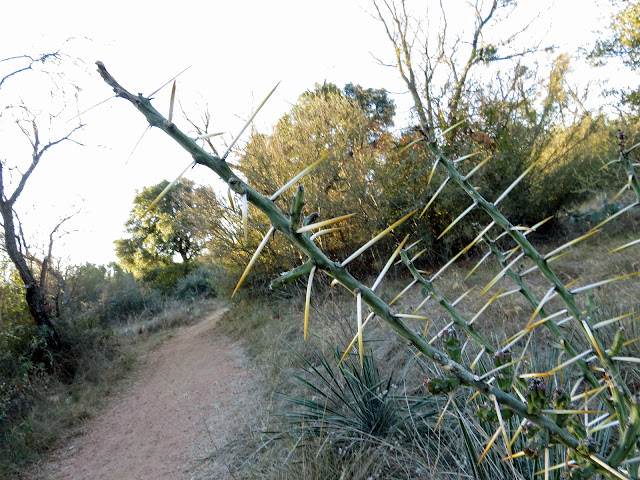 The plan, even if I didn't find where the old two-track intersected the trail, which I did the second time, was to strike out off-trail to the NNW anyway.
Now going off-trail, no matter how briefly, should never be a casual thing. Take the case of a woman hiking the Appalachian Trail in Maine 7 years ago. She stepped off the trail for a bio-break, she simply wanted a little privacy to pee, and the final entry in her journal shows she died of exposure/starvation about a month later. It was two years before her body was found a couple miles from the trail. 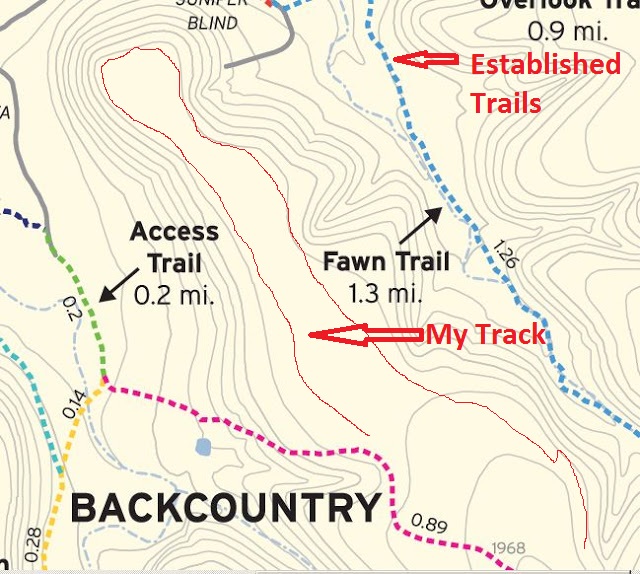 You would have to work really hard to get lost on the track-less ridge I was headed for, bounded, as it is, on three sides by steep, rocky slopes and the forth by established trails and fence-lines which are pretty much impossible to miss even in the dark, but even so, before I stepped off the trail I had a plan.
I was carrying three separate maps and a compass, my GPS was on and tracking me, and I had two extra sets of batteries for it in my pack, all of which is true even when I'm on established trails. (Yep, definitely overkill but I've been hiking by myself for decades now and I'm still here so I'll take overkill.) But those were all backups to my primary plan of keeping the steep slope off my left shoulder which guaranteed I would eventually circumnavigate the ridge and come back out on the established trail.
Which obviously I did. 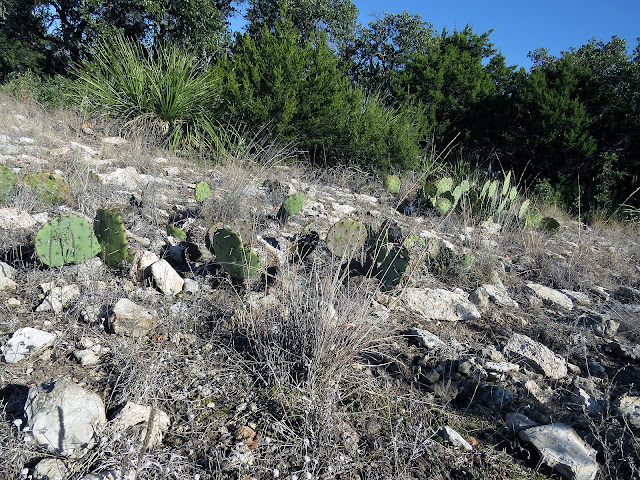 Clearly not all of us feel this way, but I believe that, whether on-trail or off, hikers have a responsibility to take care of themselves as if there was no such thing as publicly funded or privately volunteered  Search and Rescue. When off-trail in rocky, spiky land that means slow and careful. Every potentially injurious footstep planned out. Which makes for some slow progress, but that suits my hiking style just fine since being here now is more important to me than getting there in a hurry. 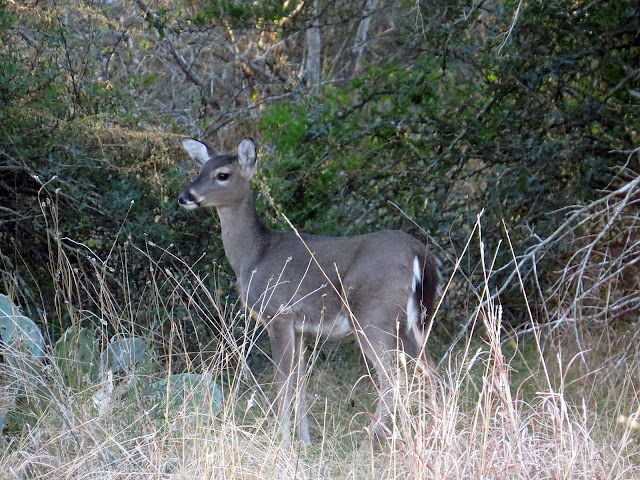 That slow, deliberate progress is probably why I was able to unexpectedly walk up on this young doe and a big old lecherous buck.
I don't know if  the buck was the same one I saw one ridge to the west yesterday or another one, but in either case he was faster than my camera-draw, though I could hear him crashing and clacking through the trees for some time as he tried to navigate that big rack through the obstacles. 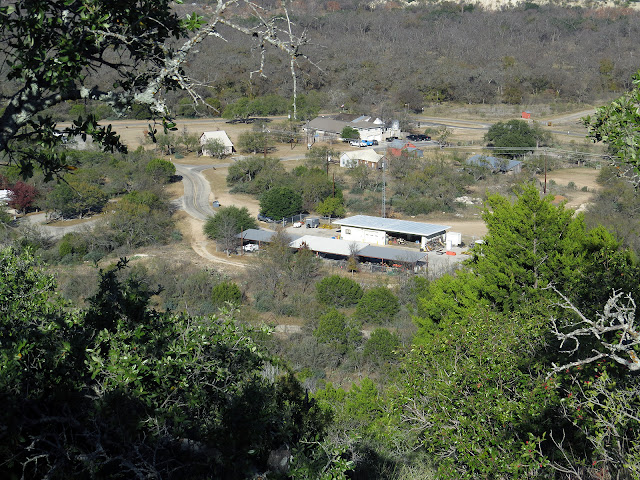 The north end of this ridge sits about 150 mostly vertical feet above the complex of buildings built during the ranching days that are now used by the park service.
As is the nature of these things, the original home, part of which is now used as the park's headquarters, has been added onto several times, as have many of the outbuildings as well. 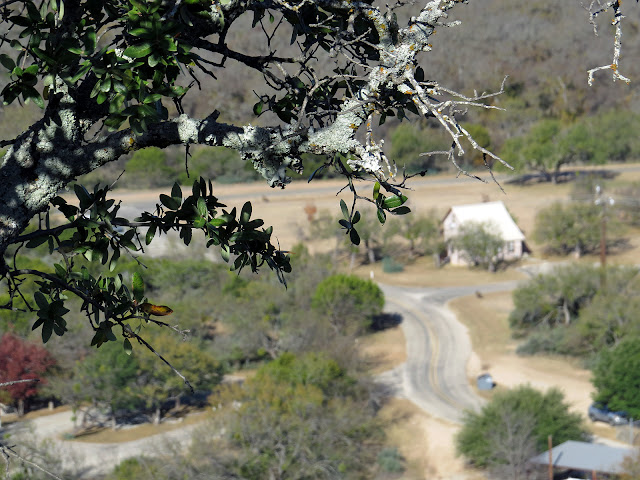 I suppose it's the distance (I'm now 4 miles hiking distance from The Van) that determined that the brow of next ridge east, only a 1 mile hike from The Van, be designated as the scenic outlook 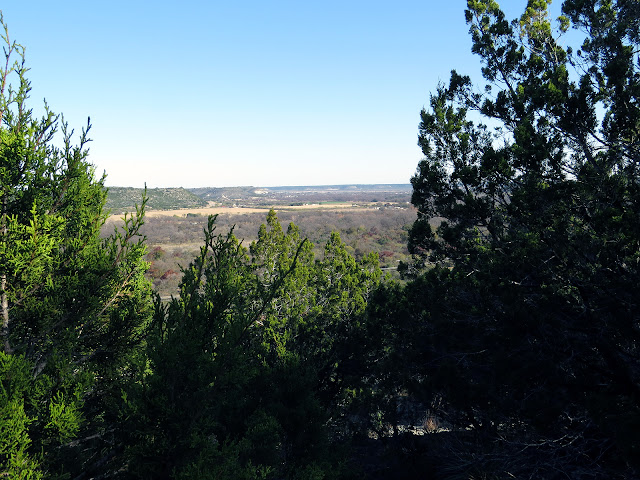 instead of this spot, but that's fine by me as it meant I would be interruption-free as I ate my lunch in a quiet place with a fine view. 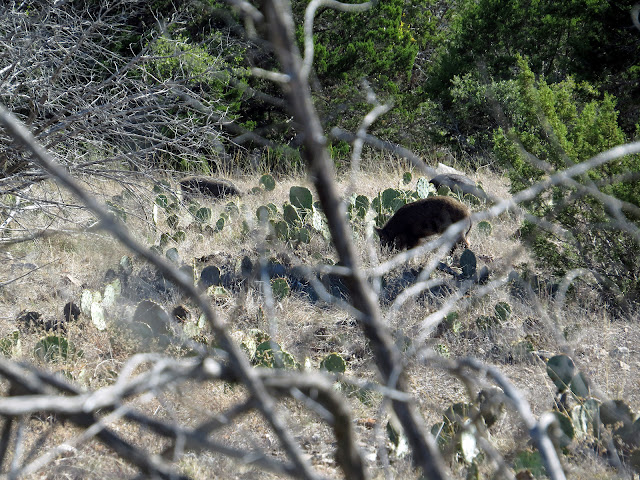 There were at least three separate sounders, or groups, of feral hogs tucked into the landscape and feeding up on this ridge with me today, 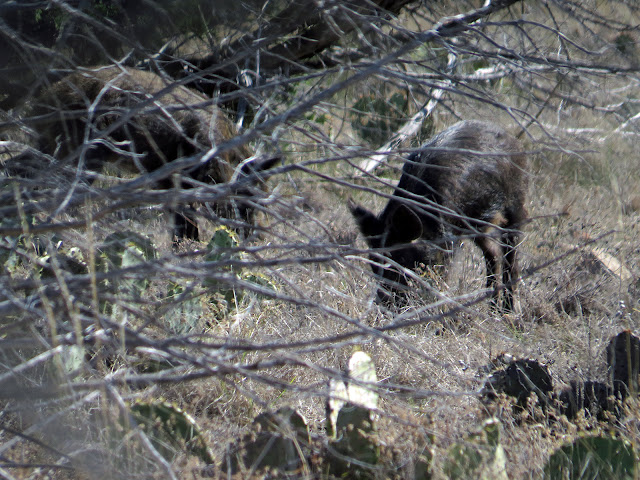 and at one point, while I was standing there focused on staying out from between the members of one of those sounders, some of whom had gone right while others had gone left, with my proposed track right up the middle between them, 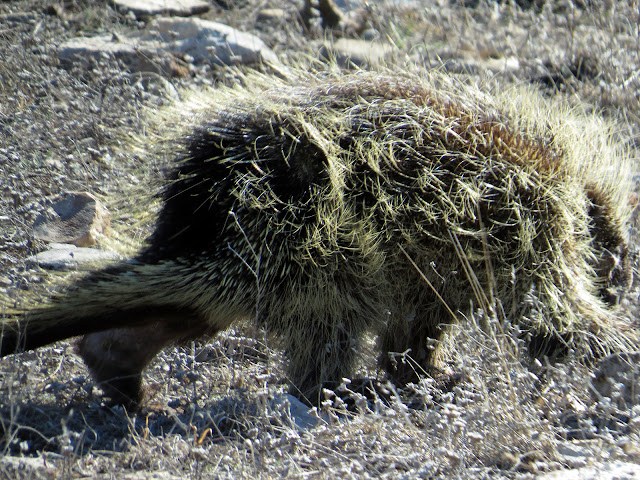 this guy snuck in out of nowhere and trundled across right in front of me! (Ironically, this is where, I took a startled half-step back and got a dozen or so prickly pear spines in my leg for my carelessness.)
When The Sister saw this photo she asked if the ratty old thing was Sasquatch, but no, 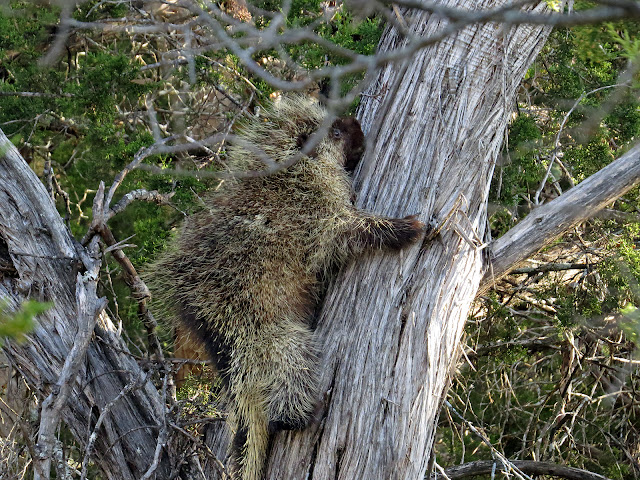 nothing quite that dramatic. Just  a porcupine heading for the safety of a nearby cedar, 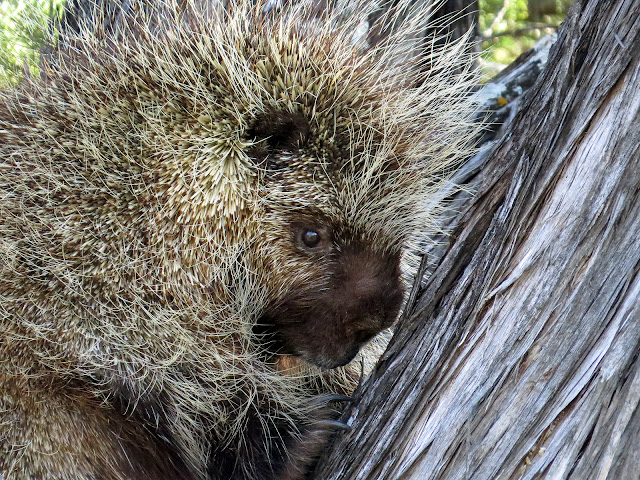 to wait out my intrusion into his space. 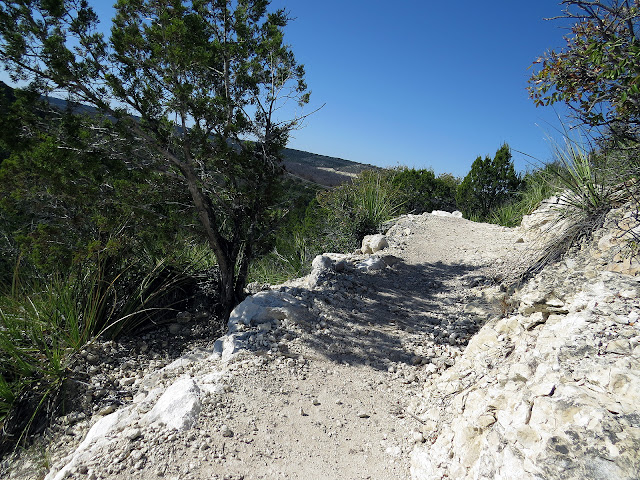 After making it back to the established trails, rather than taking the short way back to The Van, I gave my already tired legs a 15 story stair-master workout by, probably for some macho-ingrained nonsensical reason, setting the goal of climbing the steep, as in really steep, road to the park's established scenic outlook in one shot without a break, (OK, one break.)
From there I dropped down the new trail, from the rocky heights 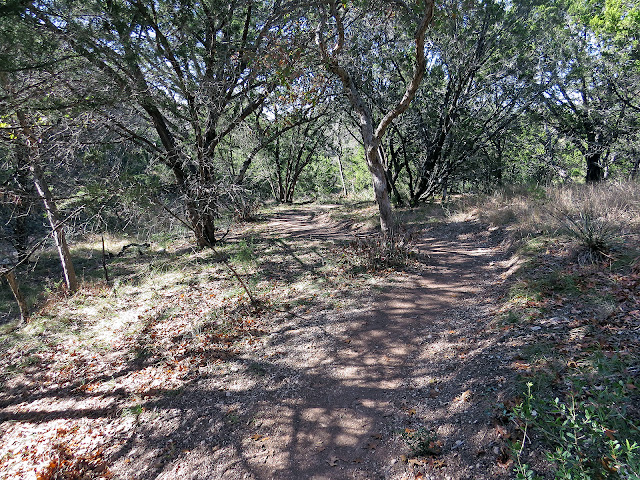 to the lush(er) bottom-lands, on the final leg back to The Van.
Yep, another successful expedition without killing myself! Which is a good day in anybody's book.
Posted by greg at 3:37 PM