Across the River into History

Having covered 20+ miles on foot over the previous two days I figured today (Jan 27) it would be a good idea to keep the hike short - ish. (It turned out to be about 7.5 miles by the time I quit screwing around out there) 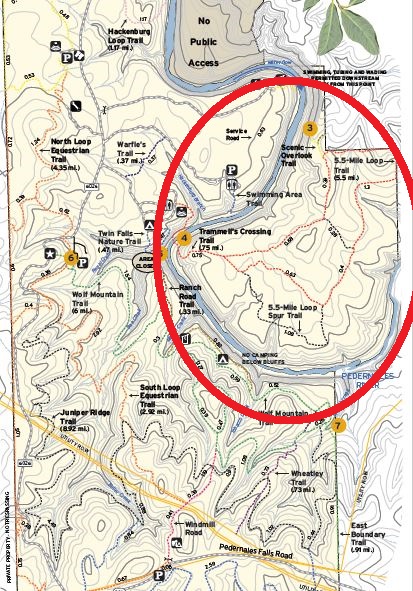 A good spot for a short hike here at Pedernales Falls State Park is the chunk on the eastern side that is cut off from the rest of the park by the river. 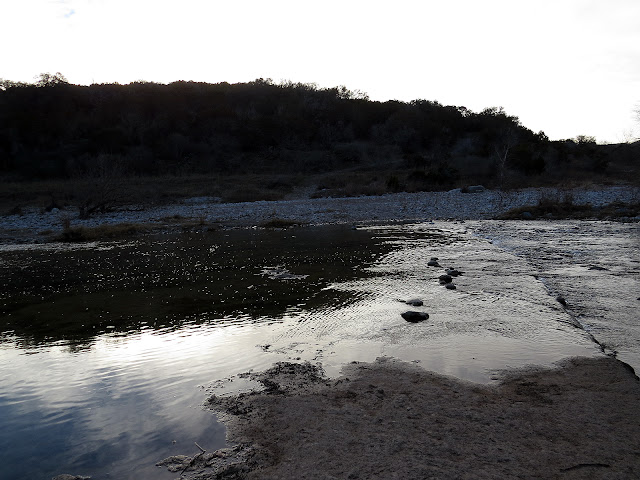 So that's why I was down at the river crossing much too early for smarter people.

This is Trammell's Crossing, which is ironic since a trammel is something that impedes progress or freedom. But this passageway into and out of the rest of the world was not named for a trammel but rather for the Trammell family that moved here in the late 1800's and had holdings on both sides of the river.

Depending on recent rainfall the normal water-depth here, actually over there just short of the far bank where the water is deepest, varies from a few inches to a couple of feet. Today it's over half, but not quite 2/3rd's, calf deep. 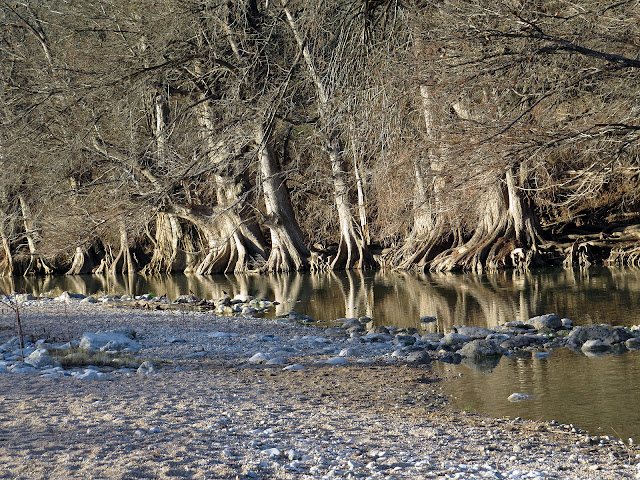 Around here a reliable source of water results in Cypress trees. 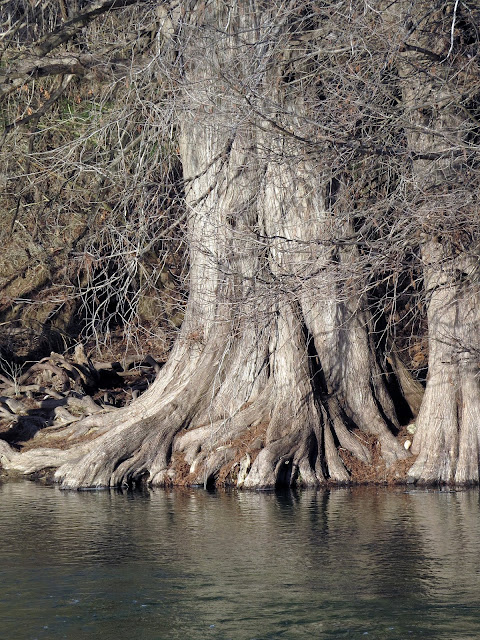 And there are some pretty spectacular specimens to be found along this river. 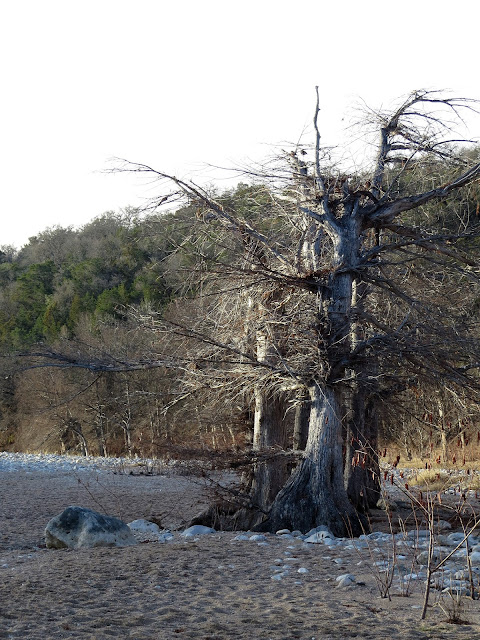 But there are also some stark reminders of the periodic floods that sweep down the river.

The water never stays high long, I once crossed the river 5 days apart with a 15 - 20 foot flash-flood tearing through in-between crossings, but when it does get high, trapped as it is between limestone bluffs, it's fast and violent. When I have made the crossing a few days after one of these floods its extent is bookmarked by fresh debris caught up in the trees high over my head. 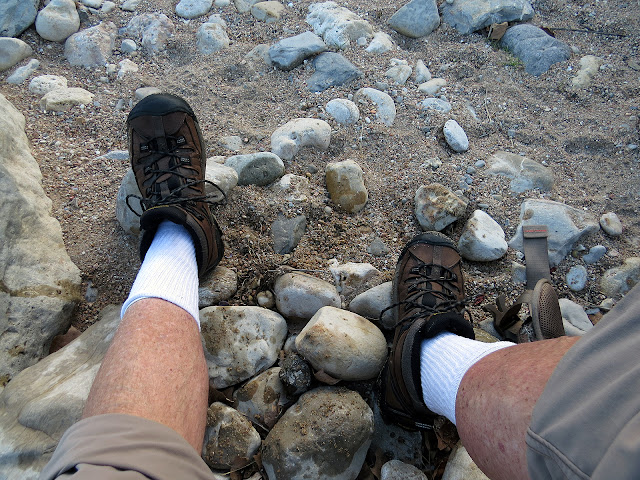 But the river has been behaving for the past few months so this particular crossing was uneventful.

I used to make a big deal out of water-crossings.

I carried water-shoes with me all the time just in case I ran into one and did the whole remove-the-boots-and-socks, tuck-them-safely-inside-the-pack, drag-on-the-water-shoes, cross, wrestle-the-wet-water-shoes-back-off, dry-my-feet-carefully, and then go through the whole getting-the-socks-and-boots-back-on-and-laced-tight rigmarole. (Whew! I'm worn out just writing about it.)

Now days, as long as I can reach the bottom with a hiking stick, I just plow straight on in.

The only concession I make is that if it's cold (Yes this is Texas, but hey, it is January) I roll my pants up then stop on the other side long enough to pat some of the water out of my socks with a towel. The  rest will dry soon enough as I hike on. 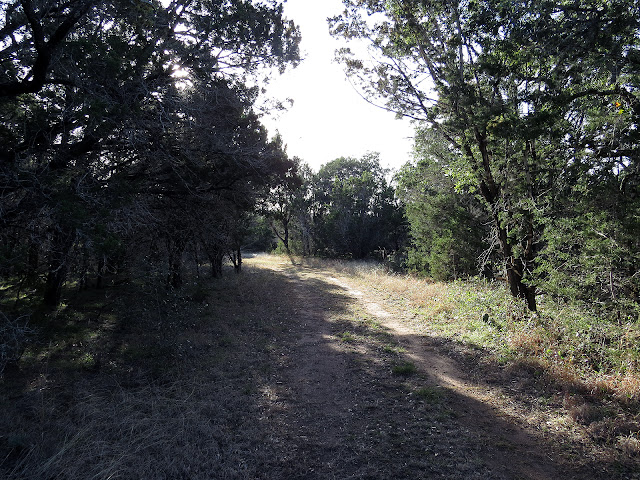 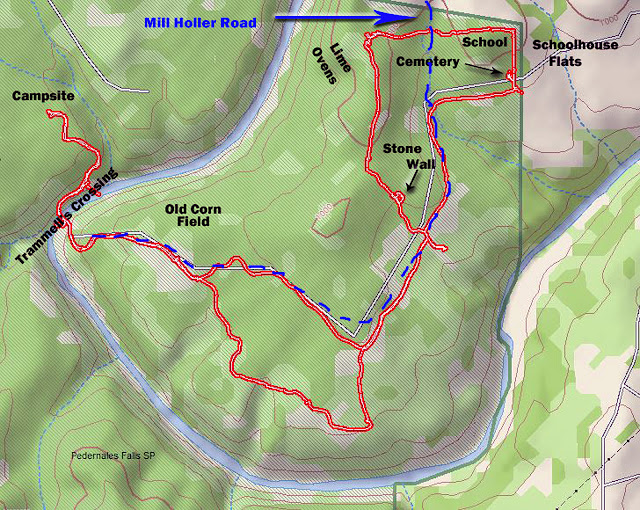 follows an old wagon road called Mill Holler that connected this area with the community of Cypress Mill two miles to the north.  (Lumber mill, cotton gin, general store, post office and school.) At that time this was the connection to the rest of the world as there was no road connection to the south at all.

You used to be able to see traces of Mill Holler road where it left the park through the north fence at an old gate. If those traces are still there today I managed to miss them even though I was looking. The fence looks like it might have been worked on recently and I couldn't find that old gate either so maybe it's gone now, along with the echoes of wagon wheels that traced the road in its day.

Of course I would have to be right on top of it to spot that old gate because it's difficult to see very far now, but before the thin and fragile layer of rich soil over a limestone base was subjected to over-grazing, 'alternative' management practices, and extended droughts through the mid 1900's, all of which changed things, perhaps irreversibly, this area looked completely different than the scrubby cedar thickets of today that shade the trail now and suck up what little water might be available. (Cedars are thirsty little things!)

Back when the early white settlers arrived this was prairie grass-lands prime for grazing, cotton, and even corn, and this little pocket that eventually became the State Park attracted what were called 'old-stock Americans' from the southeastern states, as distinguished from the German immigrants that founded and settled around Cypress Mill a few miles to the north. (Much of Central Texas was settled by Czech and German immigrants lured here in groups by land speculators) 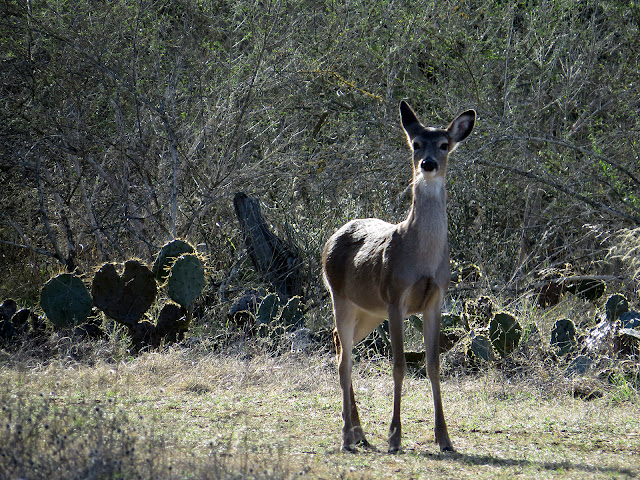 But things change and now a major part of the local population is made up of white-tail deer that seem surprised to see me.

But there are remnants of those other inhabitants if you know where to look for them.

For most of the time I've been coming to this park it wasn't available, but in 2010 a nice 73 page history of this area that mostly focuses on the past couple hundred years was published and is available in PDF format. When it came out it helped fill in some blanks and, for me anyway, has made my subsequent visits richer and more engaging. 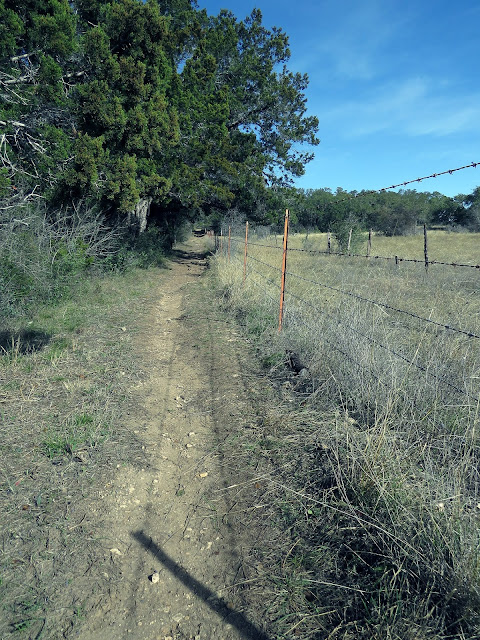 For instance, I know now that when I hit the eastern fence-line and look north that area on the other side of the fence used to be called Schoolhouse Flats where the inhabitants of 6 to 9 ranches/farms in the area regularly came together for community baseball games on Sundays.

It's called Schoolhouse Flats because just to west, on this side of the fence-line and lost now to time and the scrub, there was a wood-framed 12 x 20 school/church where local kids went because their parents didn't particularly want them doing their lessons in the German of the Cypress Mill school. 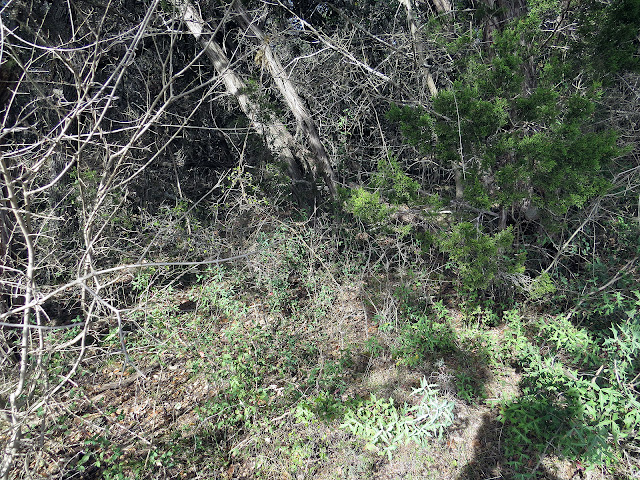 But a couple three decades ago, long before that history was published, right near were the trail hits the eastern fence-line and turns north I stumbled on my own little bit of history - probably because I tend to lollygag and poke around rather than just hike a trail to get it done - During one of those rambling ambles back before the fence-line maintenance track was officially turned into a trail, I stumbled across a cemetery that none of the park people I talked to at the time seemed to know anything about.

It wasn't easy to find back then and is much harder to spot now, even though it's actually just a few yards off the trail. Yeah, back in there behind that scrub.

Like always, as soon as I turned the corner I started looking. 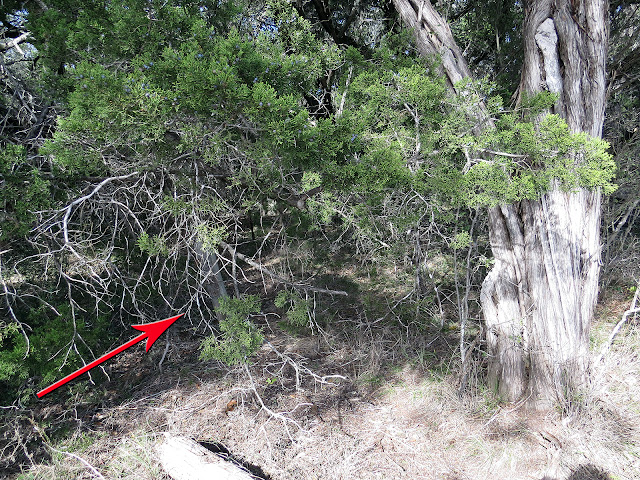 And it wasn't long before I spotted it. 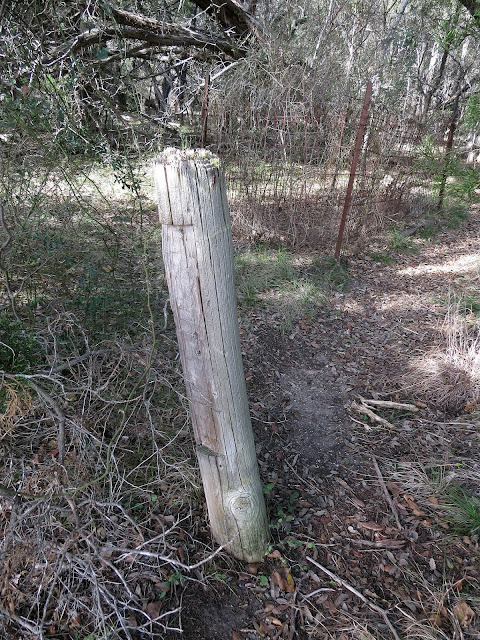 This post, like the fence enclosures around some of the graves, probably dates from the late 1930's when the Wheatleys rediscovered the cemetery some 40 years after the last of the about 19 burials. 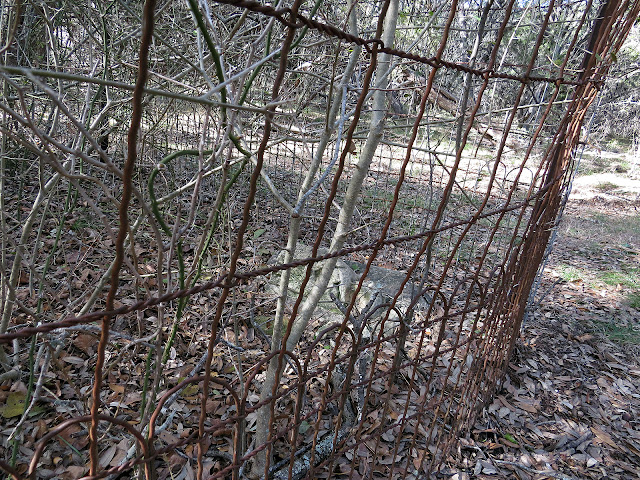 They knew nothing of the previous inhabitants but cleaned up the cemetery anyway, and did a little fencing around some of the plots as well to keep cattle out, because this was still grazeable land back then.

The post looks like it might have once held a sign of some sort but that was gone by the time I first found the place and, though this place is not exactly a secret, there has been no effort since to make it any easier to spot. 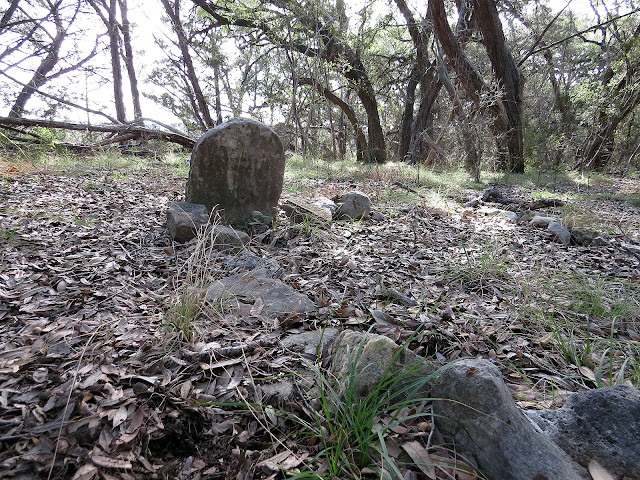 As far as I can tell, after referring back to some of my original photos of the area, not much has changed here since I first stumbled on it several decades ago. 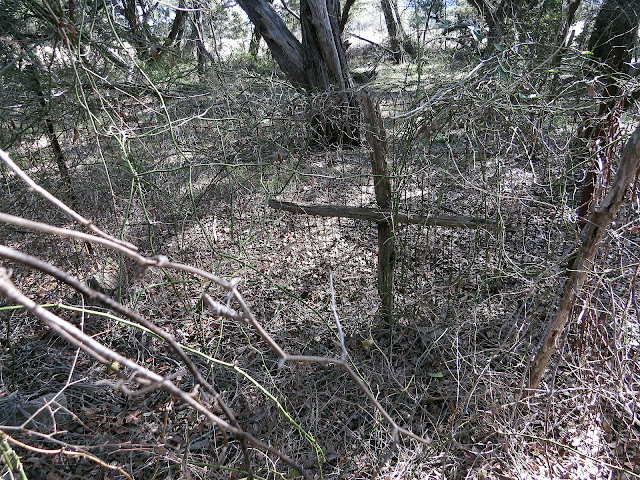 Which I think is kinda nice. 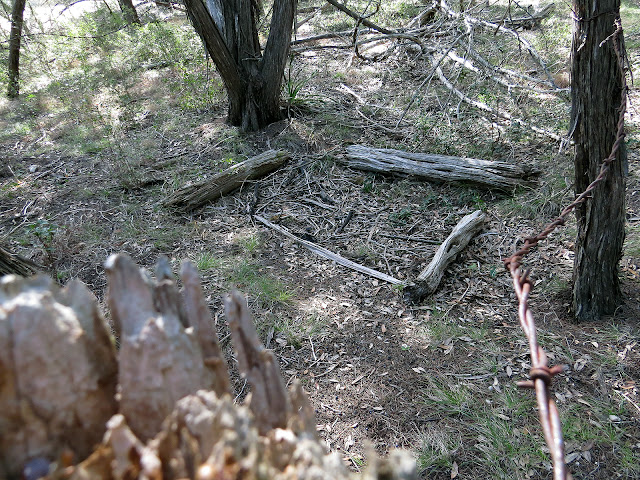 I myself have been able to locate about a dozen of the purported 19 graves, I think anyway. Some I've located are definite, others maybe not for sure. 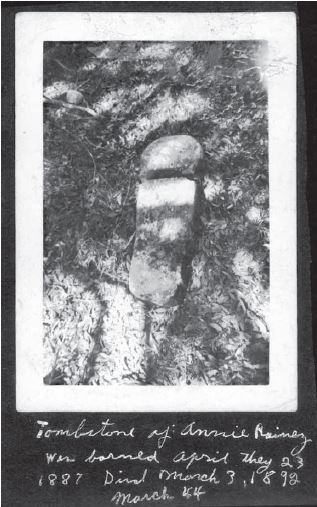 One I have definitely not located is that of 5 year old Annie Rainey shown here in a photo taken in 1944 and included in that history I mentioned. 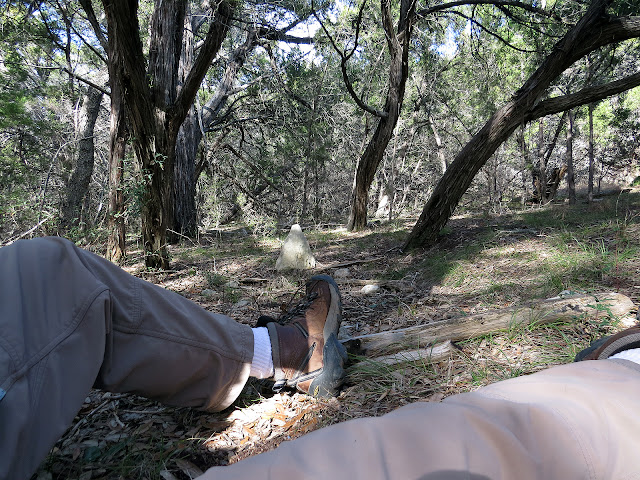 But that's OK. It's kinda fitting that I don't know where all the graves are, or who is in them.
Because while other hikers go by only yards away never realizing I, or the cemetery, is even there, I'm here, quietly spending my lunch among the lingering whispers of the rugged, independent pioneers of over 100 years ago. 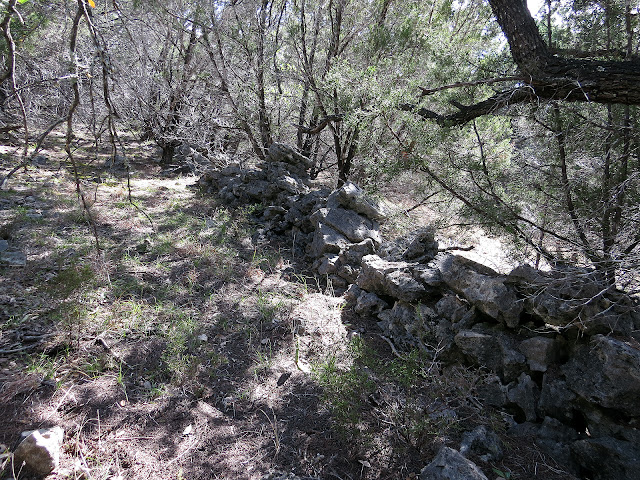 Headstones aren't the only stones left behind by those settlers.
I paced off this stone wall to be about 200 feet long and not far from where the schoolhouse and cemetery are. It probably dates from the late 1800's and delineated a yard, pasture, or crop-field. 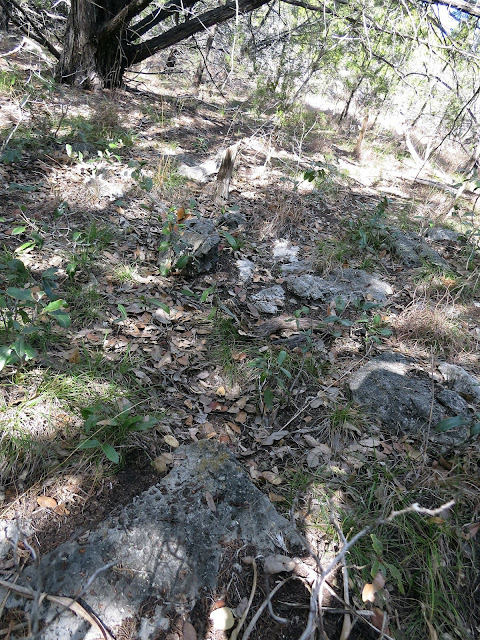 I spent some time poking around behind that rock wall looking for evidence of structures of some sort. A couple of times I thought I might have spotted the rotted remains of Cedar corner posts, but in each case the "posts", while appropriately spaced, turned out to be rooted in the ground, not pounded or buried.
I did find one cluster of stones that may, if you use your imagination - a lot - have once been part of a foundation, but that was the best I could come up with.
History can be very elusive, which on the one hand is kind of fitting, but on the other is very frustrating! 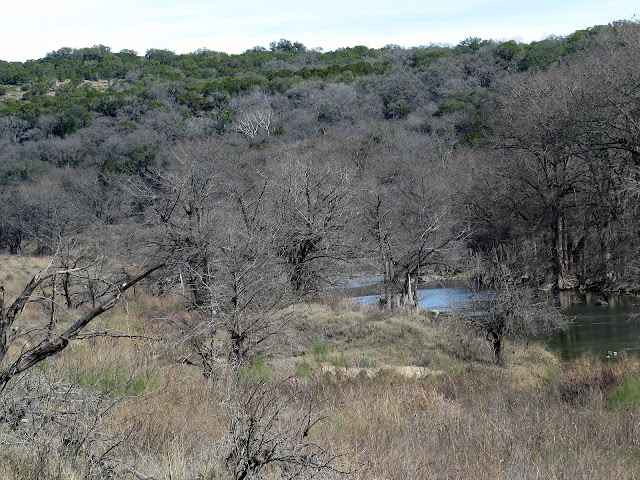 But for now the shadows are starting to lengthen so it's probably time to close the loop and head back to the other side of the river, because there's another hike waiting tomorrow. 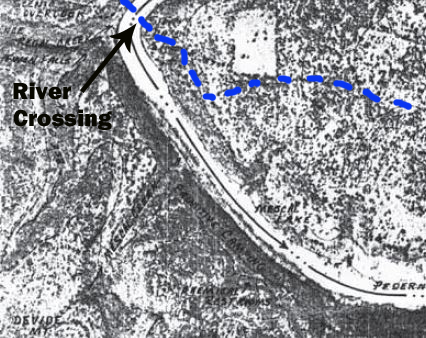 But I have one final thing to yammer about.
The image above is an aerial photo and it clearly shows that as I approach the bluff (On the trail marked in blue) before dropping down to the river crossing on my way back, I have passed right by the southern end of what has become known as Trammell field #2 (#1 is to the southeast on the other side of the river near tomorrow's hike.) The field was probably last planted sometime in the 1920's but is still clearly visible in this 1951 photo.
Today the field, which apparently was never walled like Trammell field #1, is grown up with Cedar scrub and is nearly indistinguishable from the surrounding land.
I said nearly indistinguishable. On a previous hike, since I knew it was there and where to look, I was able to poke around and find hints of the field, although the encroaching Cedar is quickly hiding it now.
But hey! Back to the business at hand.
Though this was supposed to be a short day in terms of miles it's turned out to be longer than planned, so I need to get myself back to camp and rest up for tomorrow.