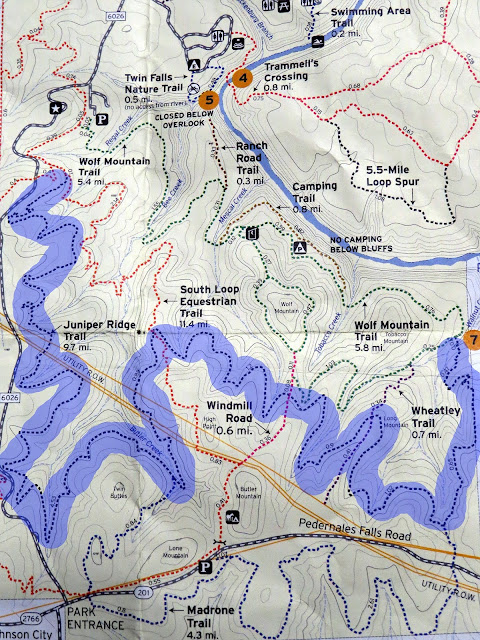 The 10 mile Pedernales Falls State Park Juniper Ridge Trail, highlighted in blue up there, is fairly new, having been officially completed within the past 5 years.

It was designed as a collaborative effort between the Park Service and the Austin mountain biking community and largely built by the mountain bikers as a mildly technical single-track. 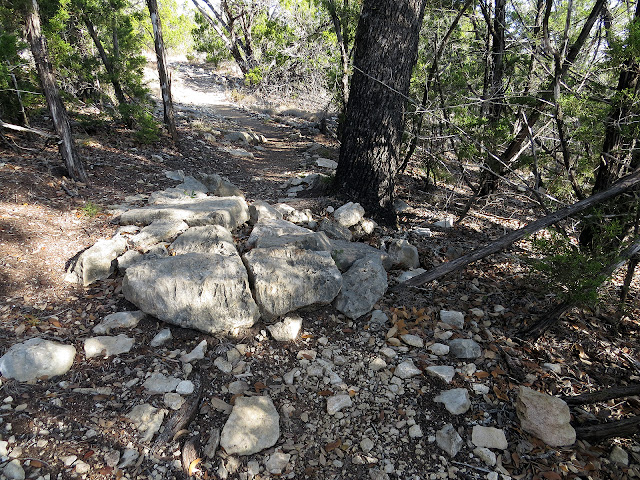 Because of that this trail feels distinctly different from the rest around here as it zig-zags wildly through the Junipers and rugged terrain of the southern end of the park, often skirting along the ragged, stacked limestone edges of ridge-lines with an abundance of man-made jumps 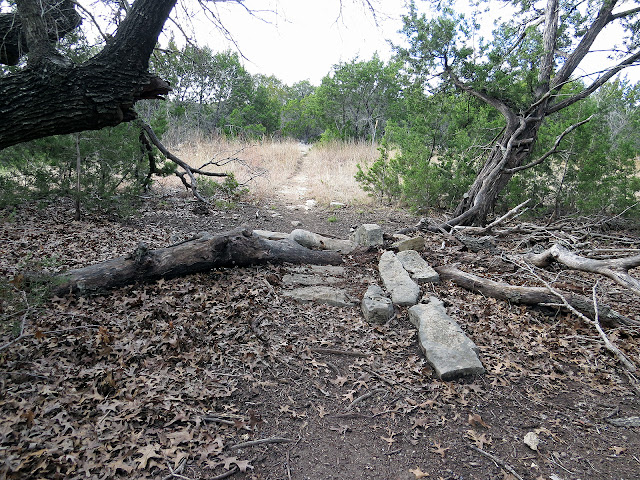 and obstacles along the way. 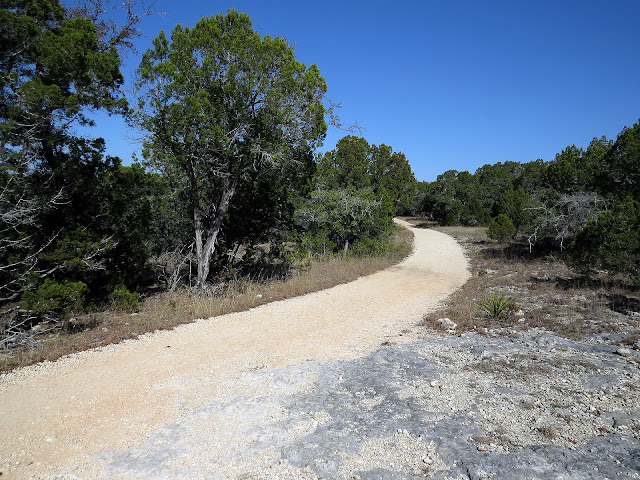 This is in stark contrast to the older, and very popular, Wolf Mountain Trail which follows the track of one of the old roads in the area.

Though I have seen the knobby-tire tracks of bikes on Juniper Ridge, I have never actually encountered any wheeled contraptions on this trail which, as shaded and lesser-traveled as it is, also makes a great hiking trail.

But at 10 miles long it is already an ambitious day-hike. Then, to make it even more ambitious, throw in the fact that this trail doesn't actually touch a trailhead anywhere along it's length which means you have to hike other trails just to get to and from it, and you have an epic on your hands, especially when, like me, you're too stubborn to move The Van from it's campsite to a closer trailhead which adds even more miles to the epic.
Since, as my age keeps climbing up the scale past 'best by' and on towards its expiration date, I've gotten smart enough, usually anyway, to avoid "epic" in favor of being able to move without screaming in pain the next day, I chose to hike only a portion of the trail. 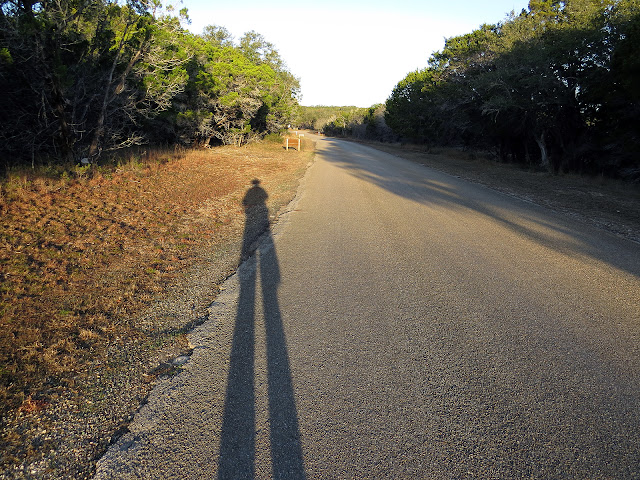 With miles to go I got my usual early start. and once again, to avoid road-hiking, headed cross-country to pick up the equestrian trail 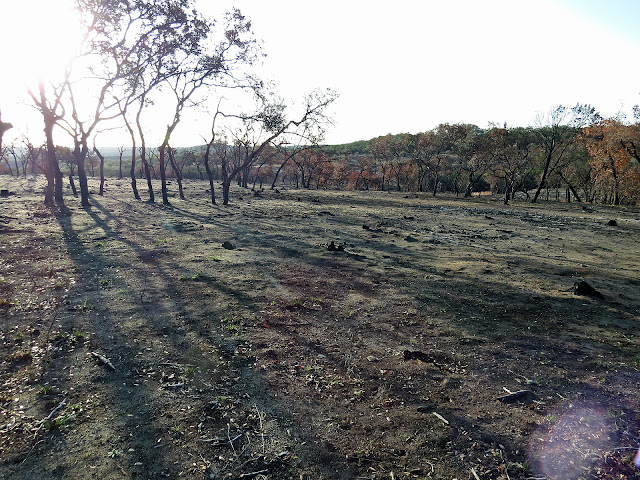 This time, instead of turning north when I hit the established trail and almost immediately walking out of the burn area, I turned south, deeper into the burn. 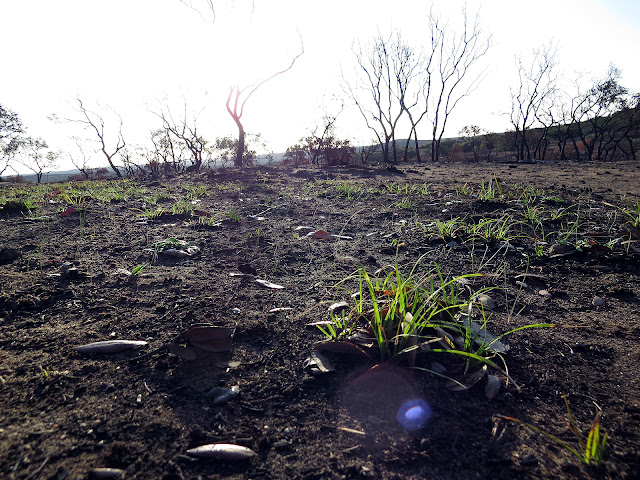 But it certainly wasn't all ash and cinders. 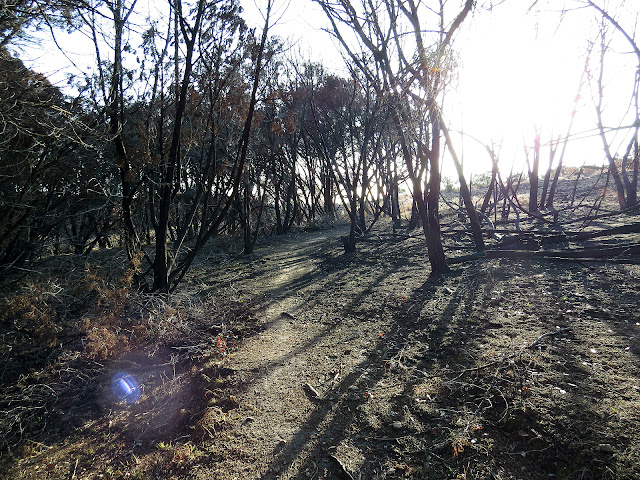 Though there are spots where the badly burned trees are going to cause issues with the trail in the future as they start coming down. 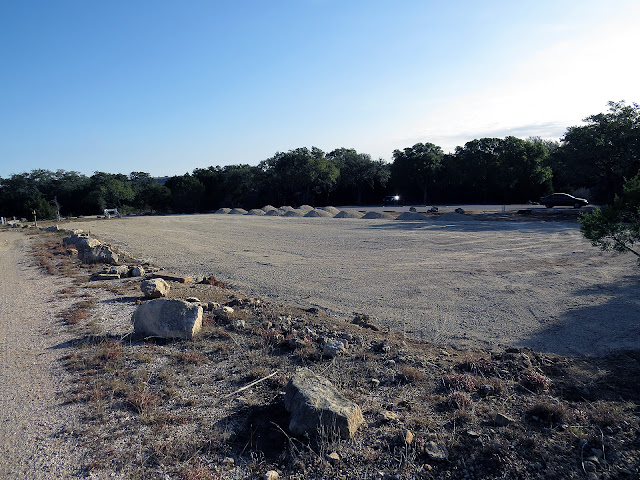 Just after leaving the burn area behind I went by the Wolf Mountain trailhead and got an unpleasant reminder that people are putting more and more pressure on this park.
Unless you've been there this photo probably doesn't mean much, but in the distance, were that car is parked, is the original parking area for the trailhead. Everything there in front of me is clearly where the park system is in the process of more than doubling the capacity of the parking lot.
Sigh - - - 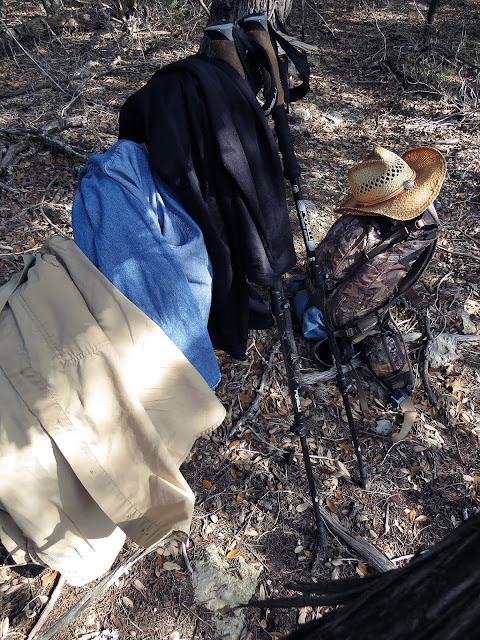 With the sun just barely up when I started out, the day (Jan 26) was pretty dang cool and I left camp wearing a base-layer, two shirts, and a heavy jacket.
By the time I had worked my way out to the Juniper Ridge trail and hiked its first couple of miles things were heating up, even in the shade.
If you look close you can see that I'd already removed the jacket, crunched it up nice and small, and strapped it to the bottom of my pack. But now that wasn't enough and I needed to ditch the base-layer and one of the shirts too.
This, of course, required stripping down to skin and fortunately there was no one around, because nobody wants to see that! Even I had my eyes closed to avoid getting an unwanted glimpse of the dreaded fish-belly-white old-man-belly. 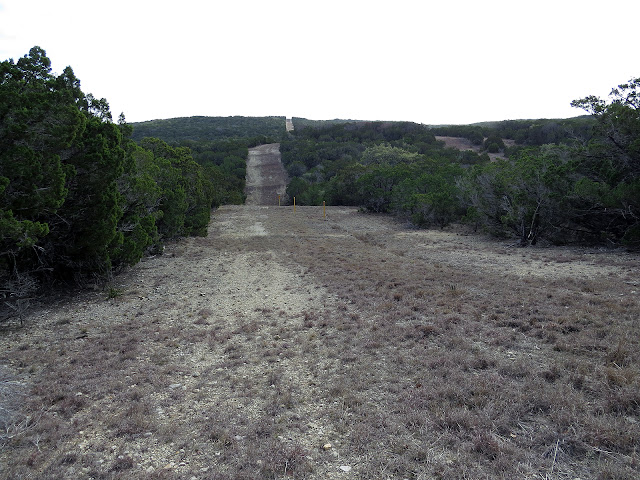 From the late 1930's until they turned the land over to the park system in the '70s most of what is now the State Park was owned by the Wheatleys and run as the Circle Bar Ranch. In 1960, perhaps because Charles Wheatley was an oil man himself, they allowed a pipeline to be laid across the southern end of the ranch.
There are actually three pipelines here now on two parallel easements, one gas and two petroleum, which the Juniper Ridge trail crosses twice and touches once.
Back in 2015, while the trail was still being developed and before any maps of it existed, I was following fresh-cut stumps and limbs along the new trail, and when that petered out, the sometimes erratic survey-tape marking it's proposed route. At the time I knew little of the trail other than it crossed the pipeline at least once because I had approached that crossing from the other side the day before.
At one point the flags led me out to the pipeline then disappeared on me. I assumed this was where the trail crossed the pipelines but could find no sign of it on the other side, the north side.
So, knowing that if all else failed I would eventually run into Windmill Road, I set off east down the pipeline to find the trail.
Good plan right?
Well you see that steep dip right there in front of me? That goes down, way down, to Butler Creek, which was running deep enough that I had to hunt up-creek for a place where I could safely cross. (If you're lost always head downstream since you have a higher chance of encountering civilization in that direction. If you are trying to get across head upstream since there will likely be less water the farther upstream you go.)
And that slope on the other side? Well that was even steeper, as in hands and knees steep. The good thing is that I found the trail I was looking for on the other side of that climb.
I don't have that problem anymore. (losing the trail) Not only have I hiked this trail several times since, it has seen more use, making it easier to spot, and now shows up on the map which clearly shows to follow the south side of the pipeline easement towards the east for a few hundred yards where the trail then plunges back into the trees again. 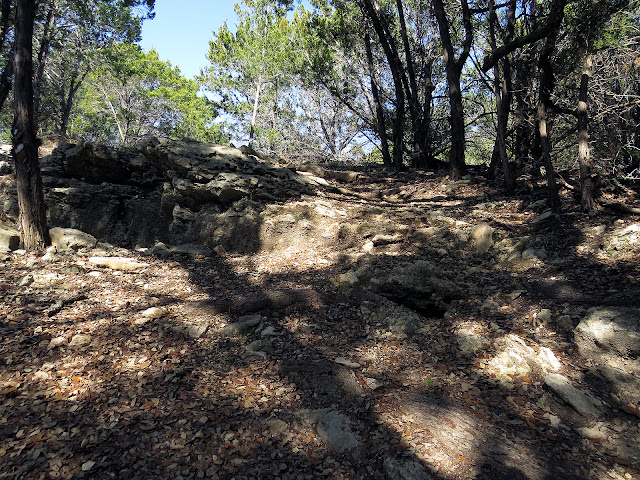 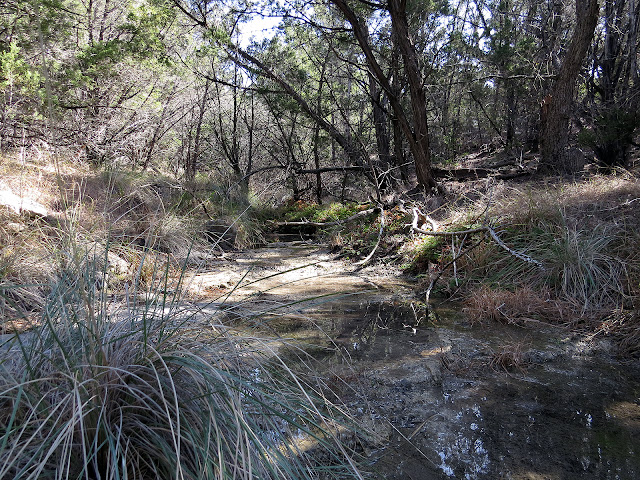 and dropping down to cross the occasional stream, until I eventually closed the loop and plodded wearily back into camp some 12 miles later.
Tomorrow (OK, next week in blogger time) - a short hike across the river into history as this old man takes a recovery day.