Today the East Half of Juniper Ridge

It's my last full day here (Jan 28) at Pedernales Falls State Park this trip and I knew it was going to be a long one (I was right. It was over 13 miles of hiking) so I headed out early this morning to hike the eastern  end of the Juniper Ridge Trail. 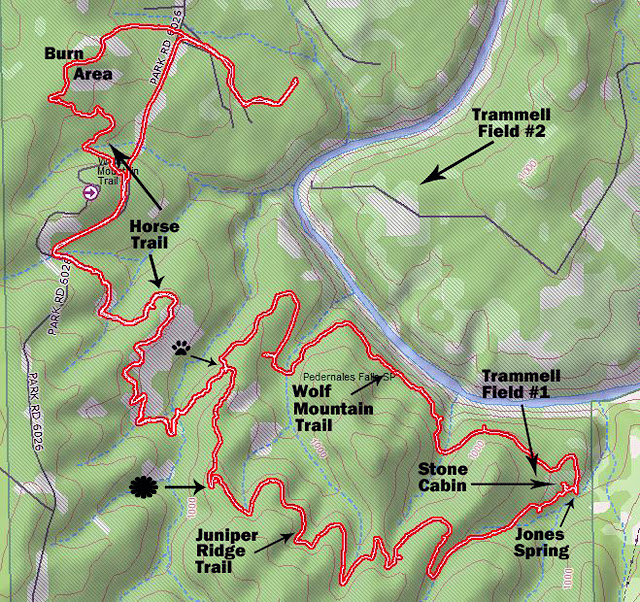 In deference to today's total anticipated hiking distance, I took the more direct route from campground to Wolf Mountain trailhead by hiking the road. Well not really the road. There's a (modern) water-line buried parallel to and just a few yards west of the road and the park service keeps the ROW over top of it mowed, which makes for easy hiking. Better than the edge of a paved road anyway.

Again, the Juniper Ridge Trail doesn't have any trailheads of it's own, so just like when I hiked the western half a few days ago, I had to start off on the South Loop Equestrian Trail 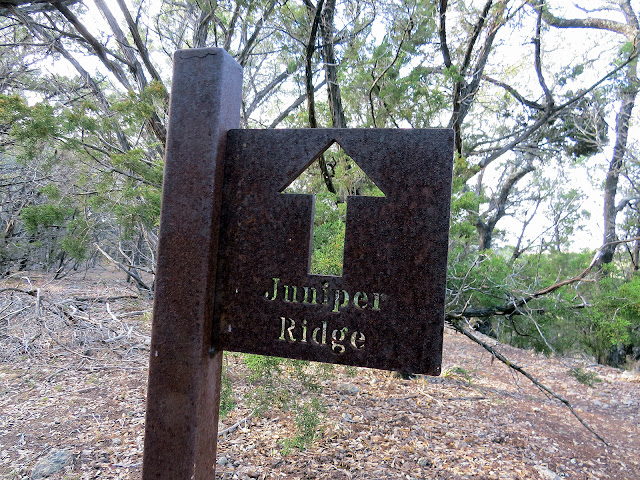 and travel it for a while before intersecting the Juniper Ridge Trail at about its mid-point, right about where the asterisk is pointing on the previous map. 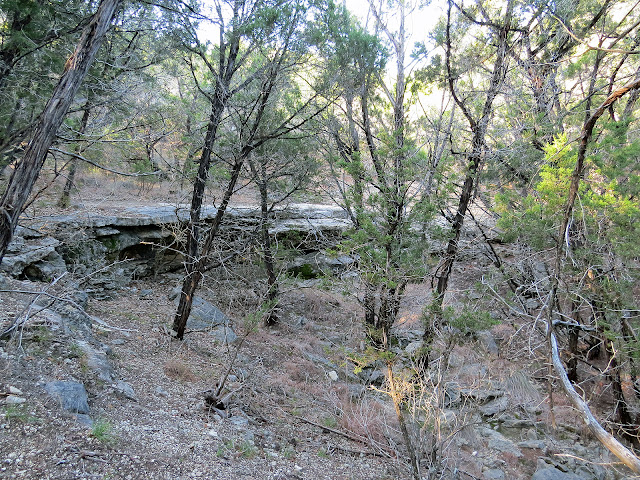 I just showed you photos of Juniper Ridge Trail a few posts ago, and since the trail is very similar its entire length I won't bore you with more of the same. Though I was anything but bored slowly hiking the ledges along the ridges which I had all to myself. 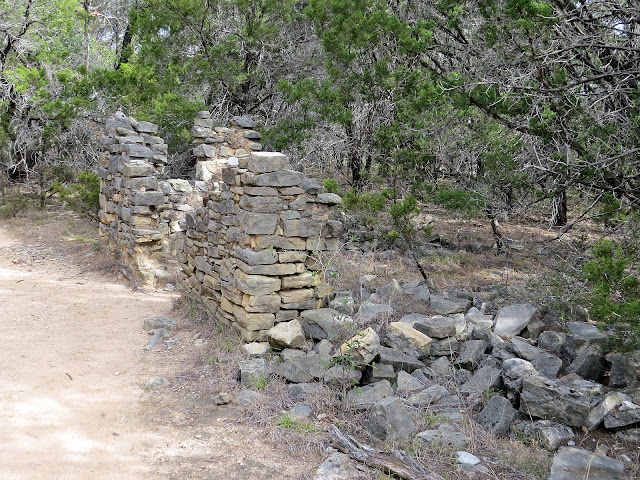 At the far eastern end of the Juniper Ridge Trail I came to the stone house.

This was built by the Trammells around 1870 when they moved onto this tract of land.

By today's standards the whole house is about the size of a modest walk-in closet, but after the Trammells were finished with it the Jones' moved in and continued to farm the nearby fields as well as raise goats. 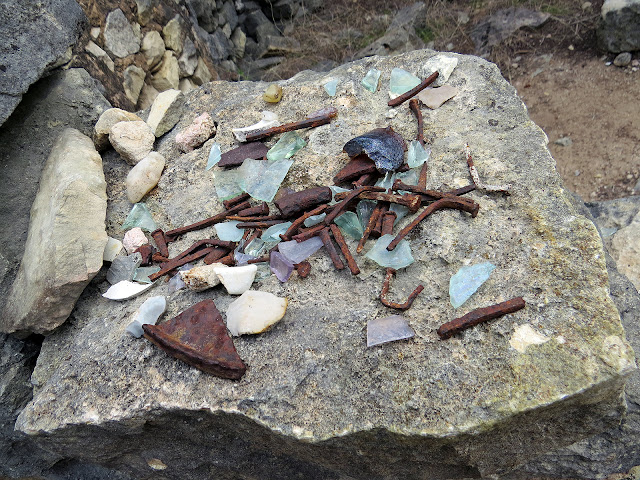 As you can imagine, the long occupancy of this house left behind 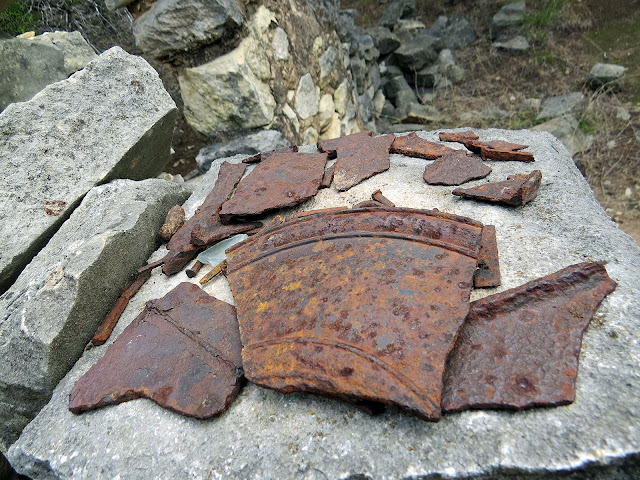 a rich array of artifacts.

Of course you are not supposed to cart these artifacts off and keep them for yourself, and it's nice, surprising even for a curmudgeony old pessimist like me that is quick to believe the worst of people, to see that many people are willing to leave the artifacts they find behind for others to enjoy and peruse, including scholars that know how to get the most knowledge and information out of them. 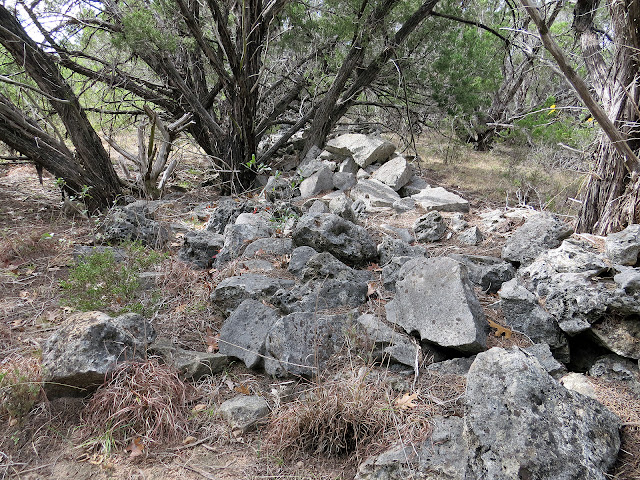 Trammell field #1 lies just west of the stone house and was walled in.

The wall is partially tumbled down now and overgrown, (When I look at the jumble of rocks I think of all the work that went into hauling and placing each one of them, by hand, which tells you how important these walls were to the builders.)  but I didn't have any trouble finding a secluded spot to settle in for a lunch shared with the spirits of those original European inhabitants. 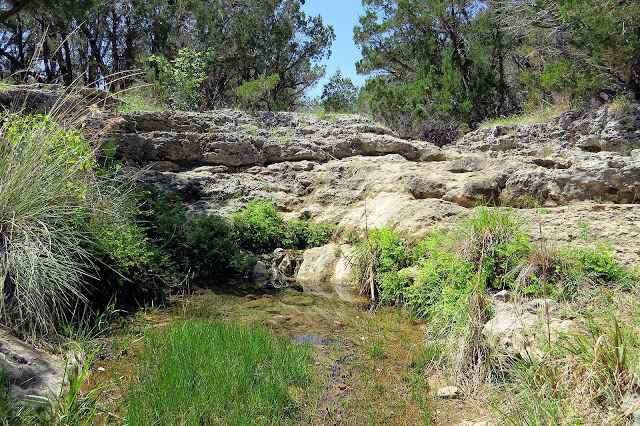 After a quick lunch, because it was already getting late and I had a long ways to go yet, I made the obligatory stop at Jones Spring, which probably played a big part in the location of the stone house, but only a quick one before continuing on, since I've gotten distracted here in the past and have been known to spend hours just watching the wildlife in the small pool. 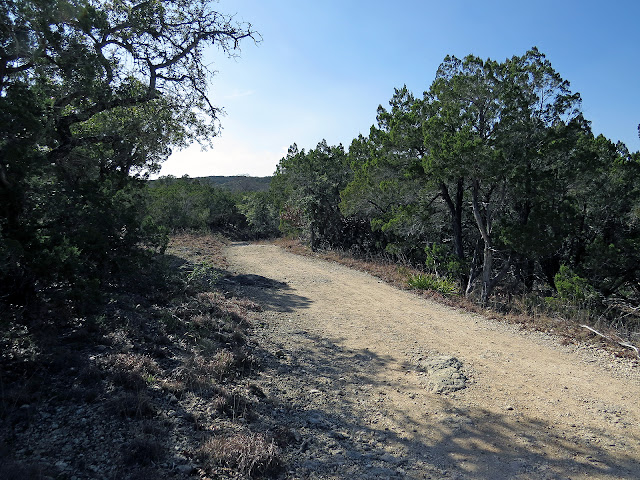 From here the way back towards camp is along the Wolf Mountain Trail.

Its pretty much track-like surface is easy hiking on weary old legs, but - well - kinda boring too. So right about where that wolf-track is on the map above I bailed off the Wolf Mountain Trail and back onto the horse trail.

The two trails don't actually intersect but they aren't all that far apart horizontally, if you know where to look. The horse trail is a ways above the Wolf Mountain Trail and you can't see one from the other, but after many hikes through here, some map-reading, and a little bushwhacking, I've made this particular cutoff more than once.

It would have made for a shorter hike to stick to the Wolf Mountain Trail, but I find the horse trail more to my liking. I'm kinda stubborn that way I guess. 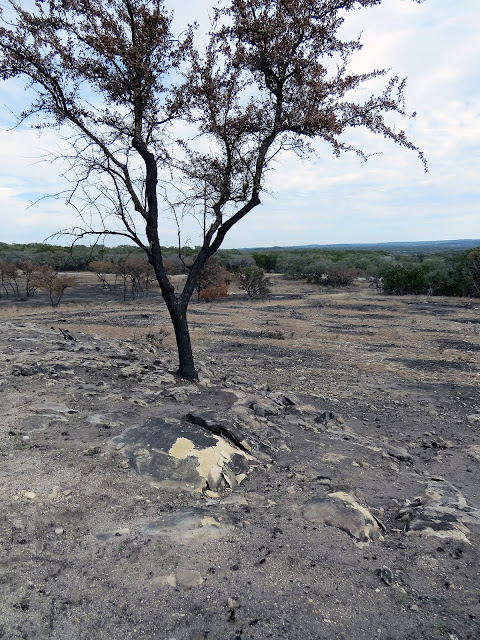 It also would have been a little shorter getting back to camp from the trailhead by retracing my steps along the road, but once today was enough. Instead I stayed on the horse trail and trekked across the burn area once again.

I'm not sure if this burn was prescribed or wild, but based on the number of large, decent hardwood  trees that were killed, the ragged margins of the burn, 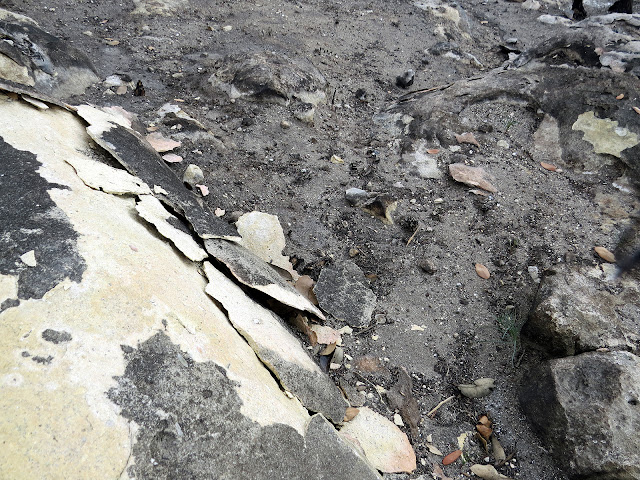 and the fact that it was hot enough to split rock, I'm leaning towards wildfire. 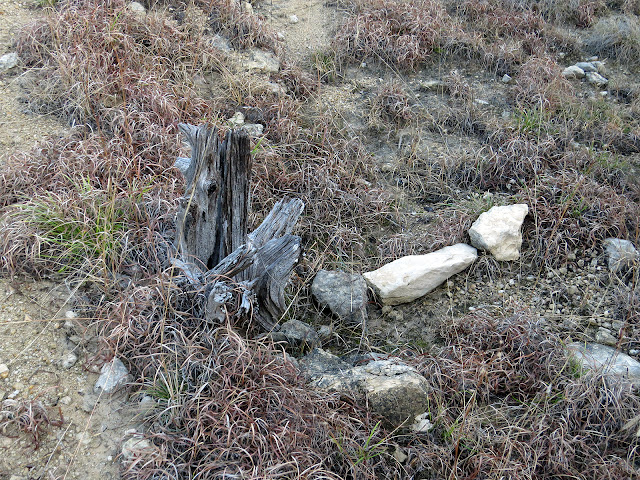 Another reason I chose the longer way back to camp was that, anticipating coming this way again, I had left my marker telling me where to leave the trail for the final bushwack back to camp in place when I did the first half of Juniper Ridge a few days ago, so I needed to come back and dismantle the marker before I finished up this trip.

Which is actually tomorrow, the finishing up this trip bit.

Next time my final hike here at Pedernales before heading home.