The Same but Different and other Nonsensical Stuff

I've pointed out before that many Texas State Parks have closure dates because they hold hunts of various types, the most common being deer.

Pedernales is no exception. 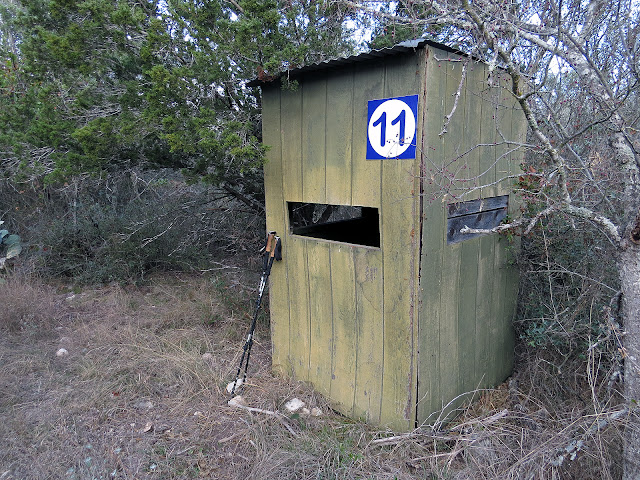 I've also included this photo in a previous post of a typical blind maintained and managed by the park system, this particular one being in South Llano River State Park. 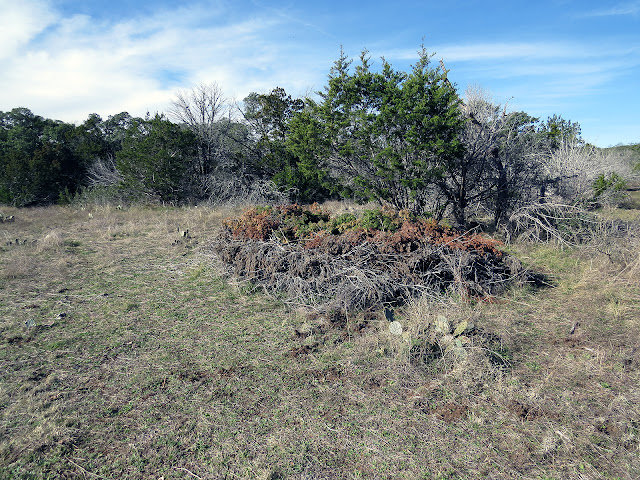 Pedernales Falls State Park holds hunts as well, but they use a different kind of blind 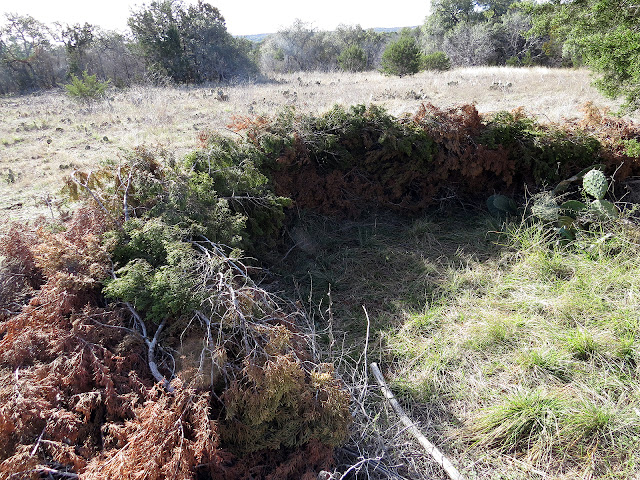 that, in my opinion anyway, is more eco-friendly and blends in with the surroundings much better.

So my vote goes to these natural Cedar bough blinds. 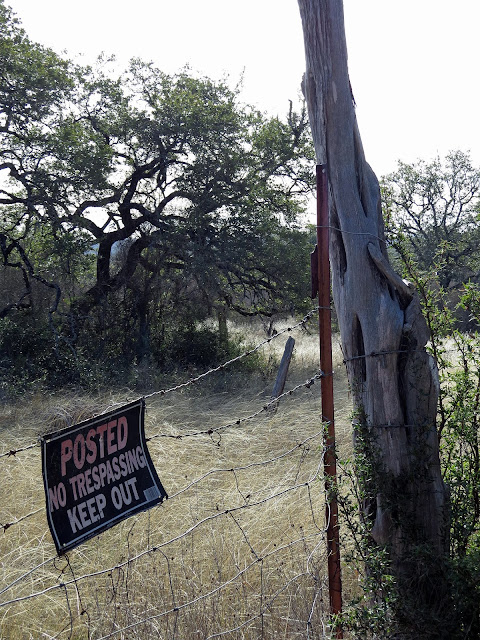 Not far from the cemetery mentioned in the last post, right where the State Park trail makes a sharp left to follow along the boundary fence, there's a wire gate, the kind with no hinges or latch, the kind you have to untwist the wire and drag aside, that leads to a track on the adjacent private land.

It's there to be used as an emergency evacuation route in case people are trapped in this part of the State Park by a flood on the river. 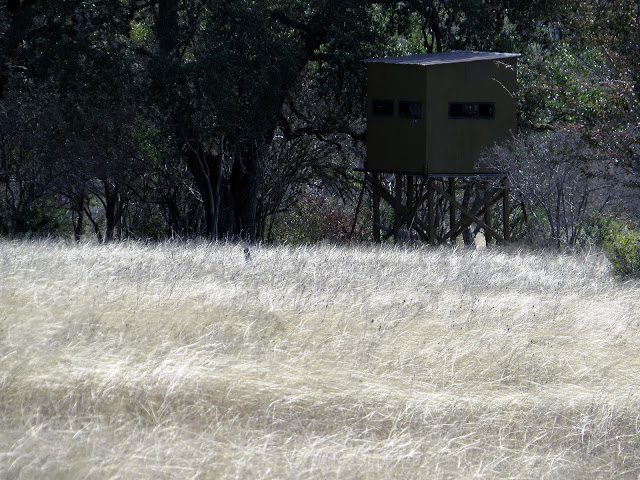 On the private side of that fence, taking advantage of a large, for this area, open area, is a more elaborate version of a deer blind.

Many ranches here in Texas, with it's ridiculously small inventory of public lands, supplement their income by hosting hunters. This usually takes the form of hunting leases, where a hunter, or group of hunters, pays an annual fee for a hunting lease. The rancher gets the additional income (Good leases are not cheap!) and the hunter gets controlled access during certain in-season dates. 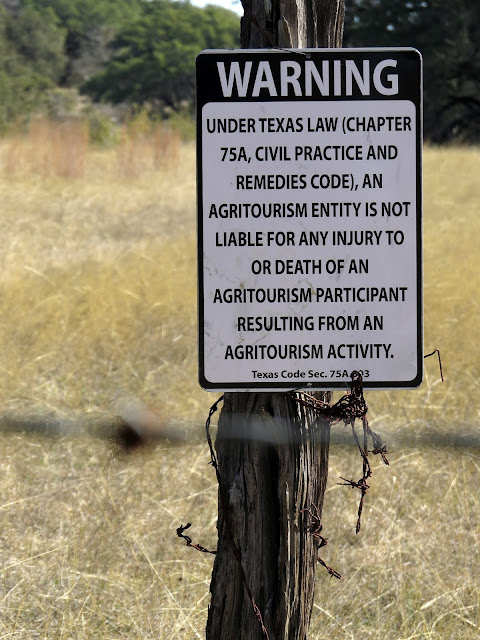 Posted near that gate, again on the private side of the fence, was this new sign.
Though it makes sense, what with the rash of people - agritourism participants - not wanting to take responsibility for themselves lately, this is the first time I'd seen the term Agritourism as part of an official document. (By the way, agritourism is apparently not in my spellchecker yet.) 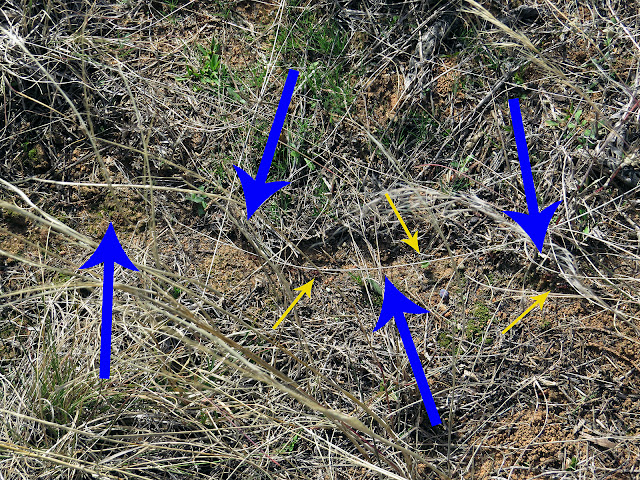 And as long as I'm throwing nonsensical stuff into this post - - -
On the same hike as finding the agritourism sign I ran across several game-trails, though most probably wouldn't notice them let alone call them game-trails.
The 1 to 2 inch wide trails, pointed out by the blue arrows, cut not only through the ground-litter but can even be traced across the 1/2 inch gravel covering parts of the trail I'm hiking on.
The yellow arrows are pointing at the architects of the little trails.

These are Leaf-cutter ants. A monster of the Texas ants.
If you watch, the ones going one way, left to right in this photo and marked by the left and right hand yellow arrows, are just moving along, while the ones going the other direction, marked by the center yellow arrow, towards the ground nest, are carrying stuff. Usually it's leaves, or parts of leaves, some so large the ant stumbles along blindly, but relentlessly, 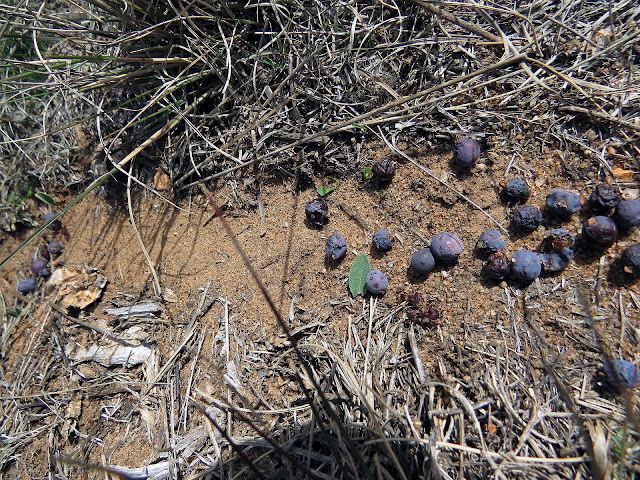 but a few of these returning workers are carrying Juniper berries. Though these few often seem to give up before getting to the nest, abandoning piles of berries right in the middle of the pathway. 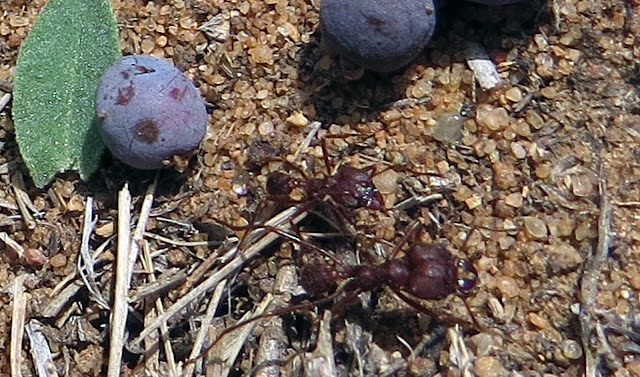 Whatever they are carrying, or not carrying, you don't want to mess with these guys!
Both ants in the image above are facing to the right. The one towards the bottom of the photo is a soldier ant, out there guarding the trail and workers. Look at the jaw-muscles that make up most of the head on that sucker!
Even the regular worker ants, like the one above the soldier, have impressive jaws in their own right.
So best just get out of the way and let them do their thing. They've been at it since long before us humans existed and will still be at it long after we have excessed ourselves into extinction.
OK, Enough of this random crap. Next time I'll complete the eastern half of the Juniper Ridge Trail and stop off at the remains of a 19th century homestead.