Down to the Falls!

OK, truth is, The Falls here at Pedernales Falls State Park are probably not what you picture in your head as a waterfall. 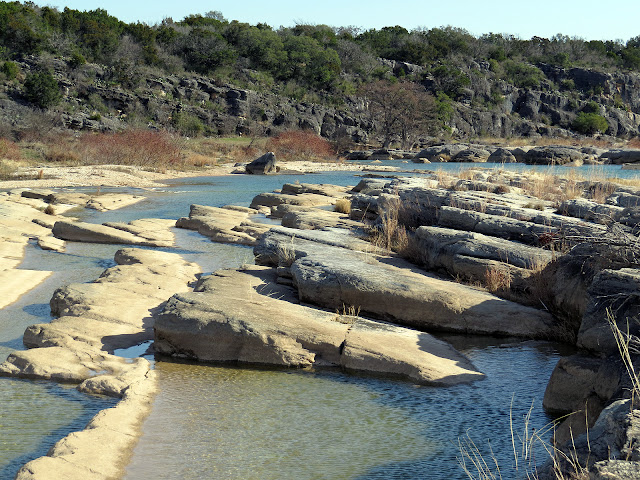 If there is an underlying theme here in the Texas Hill Country it's limestone. (Yep, that 'underhanded' pun was intended.) Layers and layers of limestone laid down over unimaginable years. And here in this area tectonic activity has tilted those layers.

West is to the left in the photo above and that's also the direction from which the water flows in the Pedernales River, left to right, right into the barrier of the tilted layers. 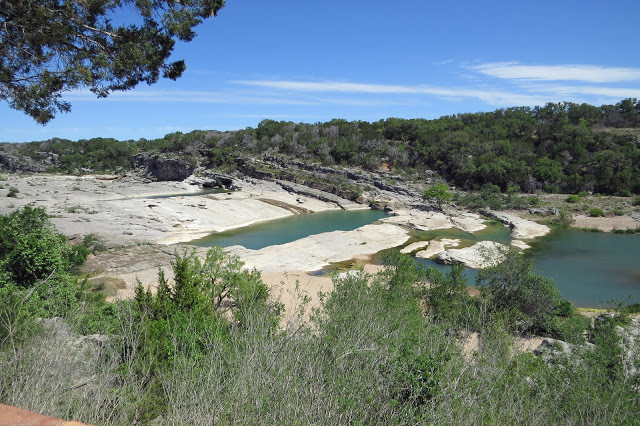 At the northern tip of the State Park the water runs into a few particularly large slabs tilted up like this where it pools up behind them until it can spill over and run down the backside of the slopes.

This is what, perhaps slightly erroneously, is called The Falls. But true falls or not, this is a very popular part of the park which makes this early Monday morning, when the park is closed to all except the campers on the 20 or so available campsites, a perfect time to head on down that way. 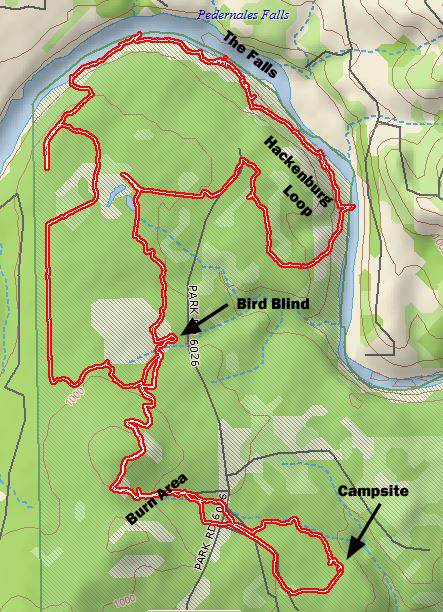 But first: The Falls are nearly 2 miles from my campsite, if I want to drive The Van down there, which I don't. Instead there is a whole trail network I can use to hike on down there. Much more pleasant than driving a paved road. But if I'm going to stick strictly to established trails that means I first have to walk the road the best part of a mile to reach the Bird Blind, which is also where the coral is, where I can then get onto the trail system.

For years my go-to solution for this has been to bushwhack up-hill due west from the end of the campground road for a quarter-mile until I intersect the South Loop Equestrian Trail. From this point I have access to the park's entire trail-system without having to walk any significant distance along roads, or drive The Van to a trailhead. 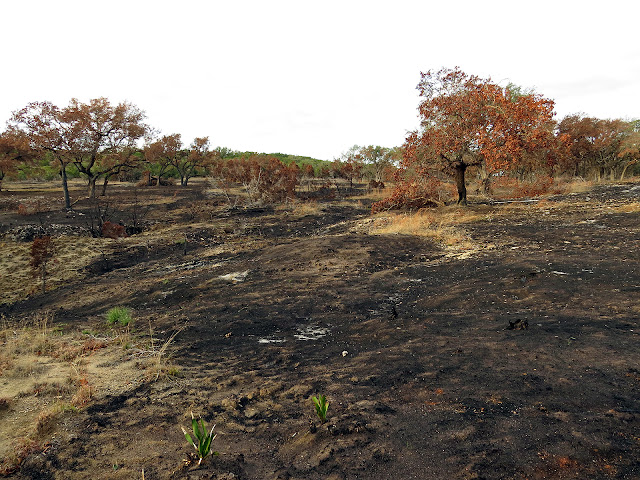 Between when I was here two years ago and today (Jan 25 2021) there was a fire across the area where I do this particular bushwhack, which actually makes the bushwacking a whole lot easier. More of a walk really instead of weaving my way through thick, and sometimes prickly vegetation. 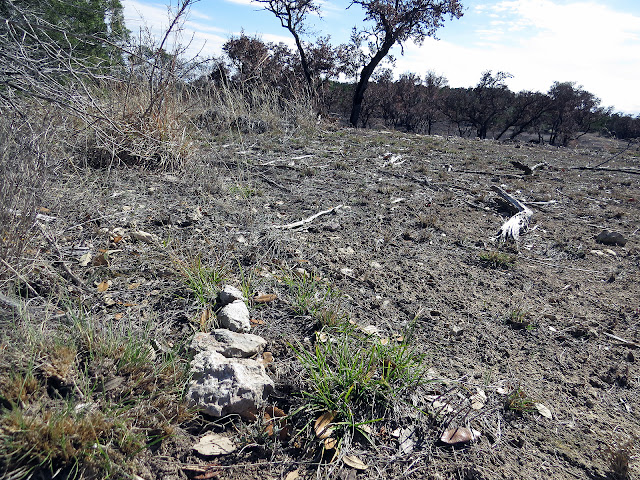 But just because the whacking is easy that doesn't mean I get complacent.

Where my bushwacking intersects the established trail I take the time to build a marker so I know the right spot to leave the trail on my way back later on.

Many people build cairns for this because they are easy to spot. But because they are so obvious I prefer to just lay out a few stones on the ground near some recognizable feature (There is a decent sized cedar growing near the trail just outside this image to the left) as a pointer. Still effective if you are looking for it, but natural enough that it doesn't jump out and scream at you. In this case the two larger stones were already there, I just added the two smaller stones, although one would have been enough. Not that it really matters since, as always, I took the marker apart when I passed it on my way back. 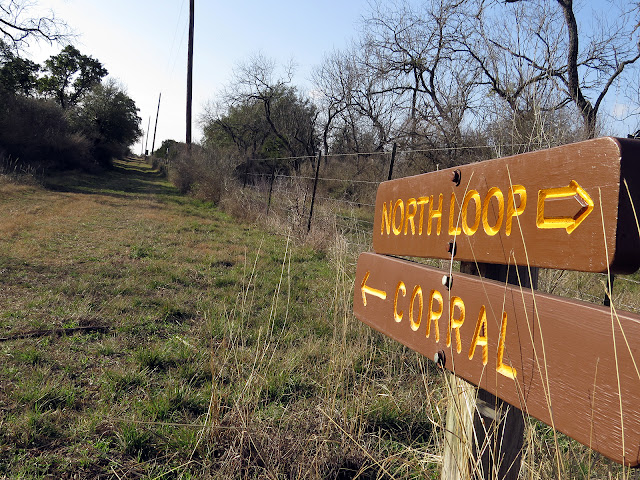 Once on the equestrian trail system I have free-range of most of the park and work my leisurely way towards the north end. 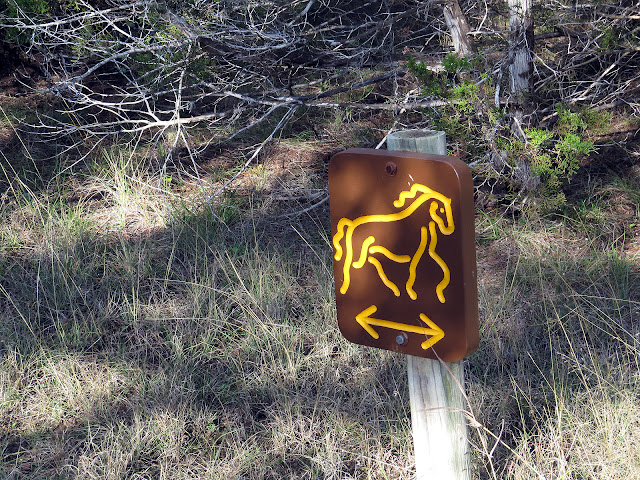 I don't know. This looks pretty Jurassic to me.

OK, maybe Jurassic is a bit of an exaggeration, How-bout pre-historic instead? 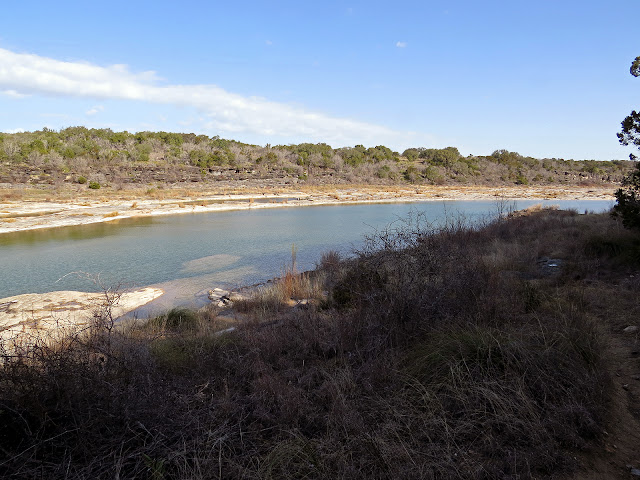 But eventually I make it down to the river.

But man! That water is pretty high!

From here, near the western boundary of the park, I need to follow the river east for a while in order to get to the actual falls area. Usually I can just walk along the exposed limestone of the riverbed, but most of that is underwater right now, 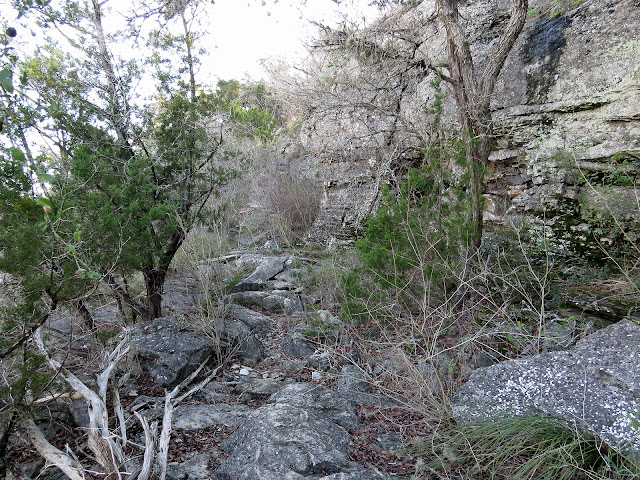 so instead I'm forced up into the rugged terrain between the bluffs and the river. (Yep, there is a trail of sorts there right up the middle of the image.) 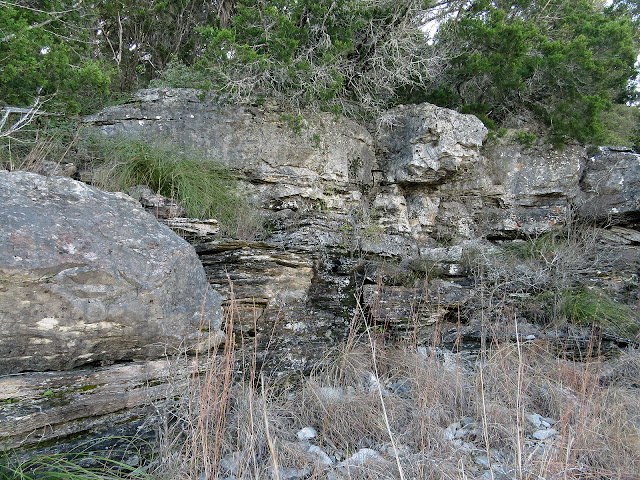 The up-side is that puts me up close and personal with the bluff where I can experience first hand the thick layers of rock (Left and top in the image) laid down over looong periods of time contrasting with the thin layers laid down and stacked up during successive short periods of the area being sea-bottom. 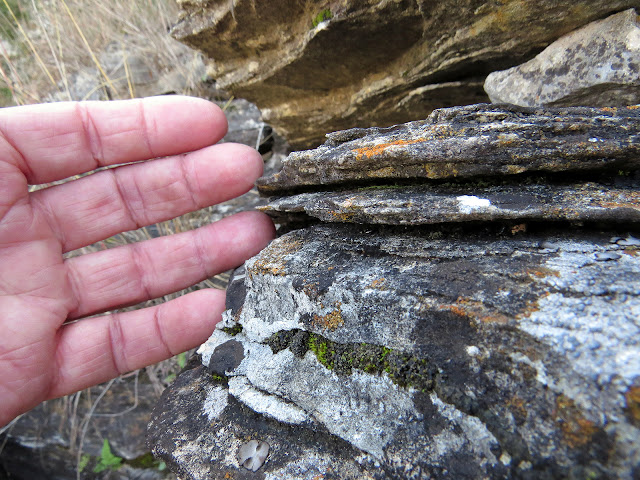 Some of these thinner layers are barely the width of a finger but still took thousands of years to lay down. 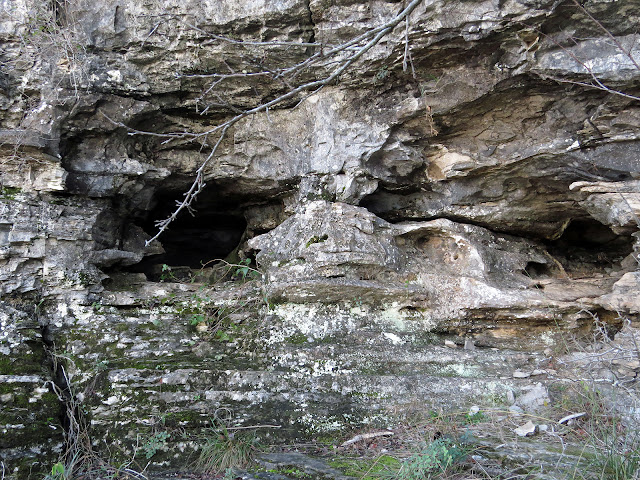 But all of them, thick layers and thin, after being cooked by the compression of successive layers then finally brought back into the daylight by up-thrusts and erosion, now show the wear and tear of flowing water.

Even those 30 feet above the current water level. 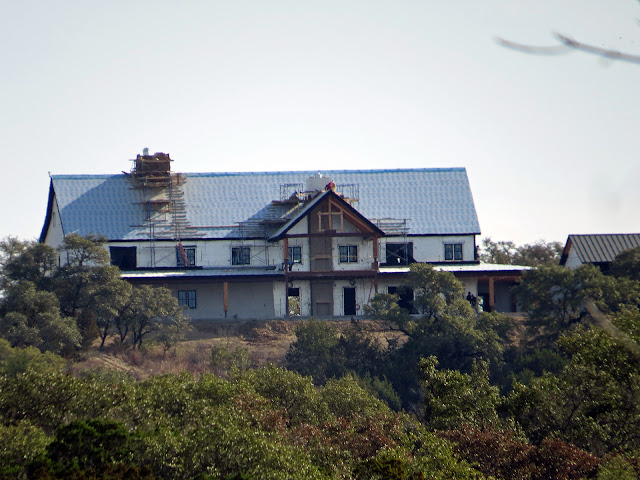 We humans seem to have this ingrained need to pick out the high spots and to leave visible calling cards that scream out "HERE I AM!". (Hence the popularity in this area of fancy but largely function-less entrance gates when the house is too far back from the road to be seen)

This place, one that was new since last time I was here, was perched way out there in the distance on the north, non-park side of the river, as high up on a ridge as it could get. In fact it was so far away that I didn't notice the scaffolding, nor the swarm of workers crawling all over this monstrosity, (We only take up a few square feet and can only be in one place at a time so why the need for so damn much "living" space?) until I got the image back to camp and onto my laptop.

A disappointing reminder that, in the name of vanity and greed, we are going to invade and sublimate our natural surroundings until we inundate ourselves into extinction.

But that won't happen today, so onward! 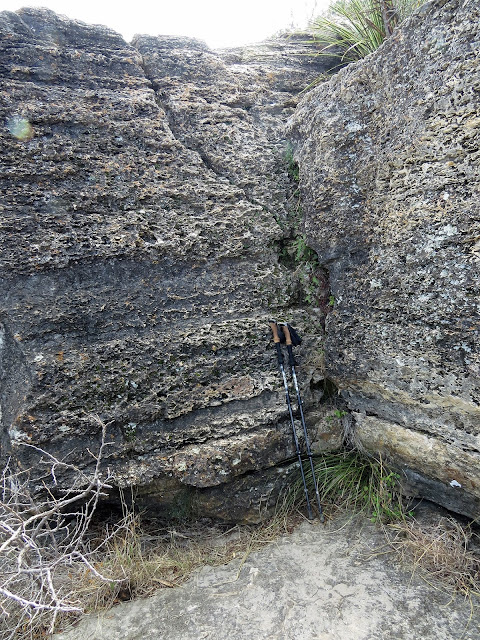 I'm almost to the falls area and normally I'd go around this down by the river, but that's all underwater right now so - - - 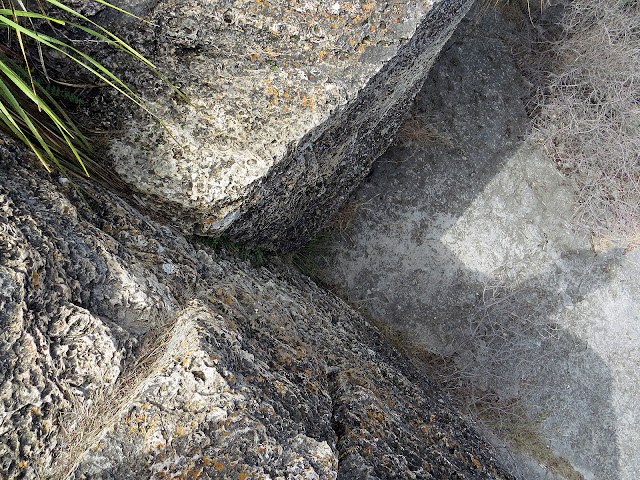 Shew! Made it!
But now I'm getting a little dizzy looking back down at my tiny shadow, so let's move on. 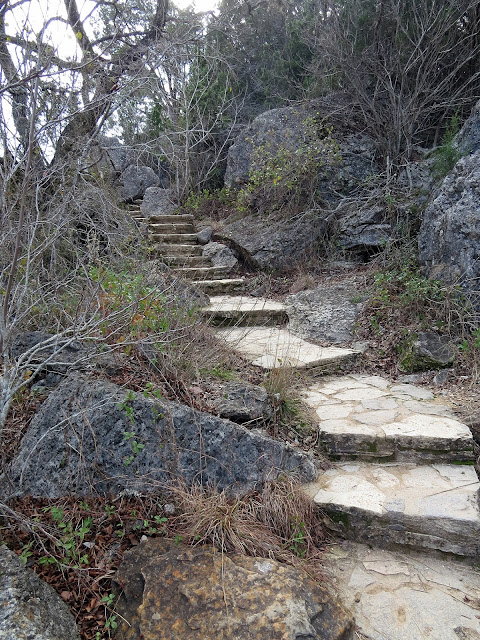 Fortunately the climb from the falls 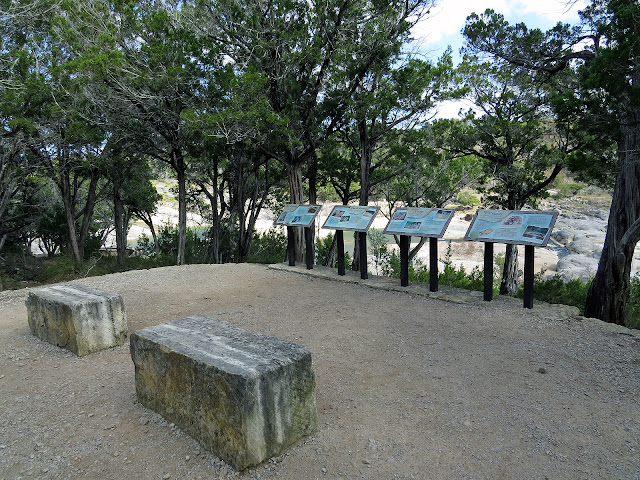 to the bluff overlooking them is considerably easier. 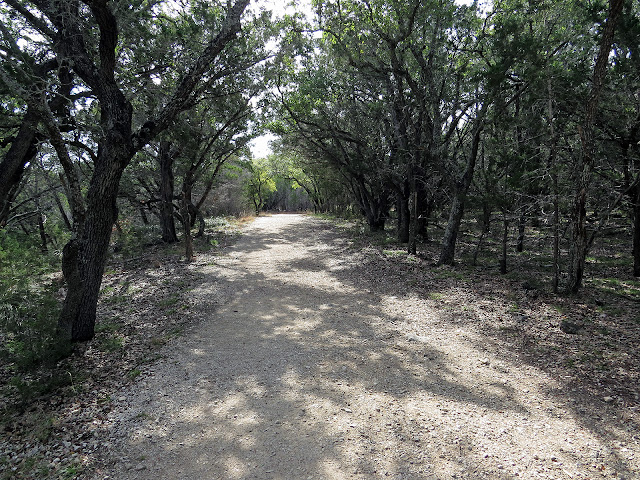 If you're not into all this hiking nonsense you can actually get here to this overlook via a short stroll down a pretty much wheel-chair or stroller accessible trail from a nearby trailhead instead. 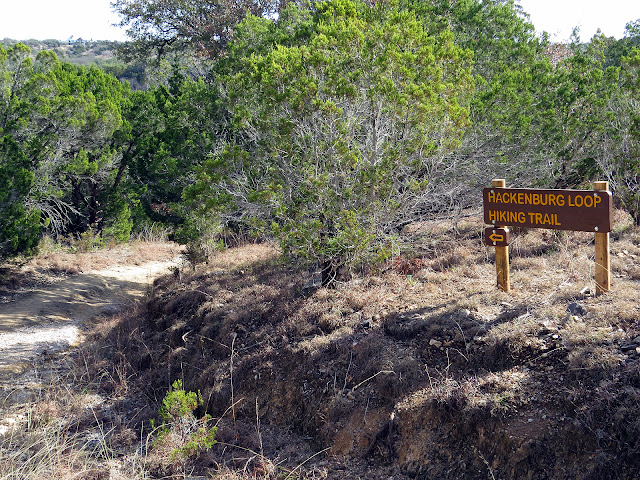 But rather than do the sensible thing and head up that way, I wander off onto the Hackenburg Loop instead.
This is named for the family that used to own this spot below the falls back in the late 1800's/early 1900's. 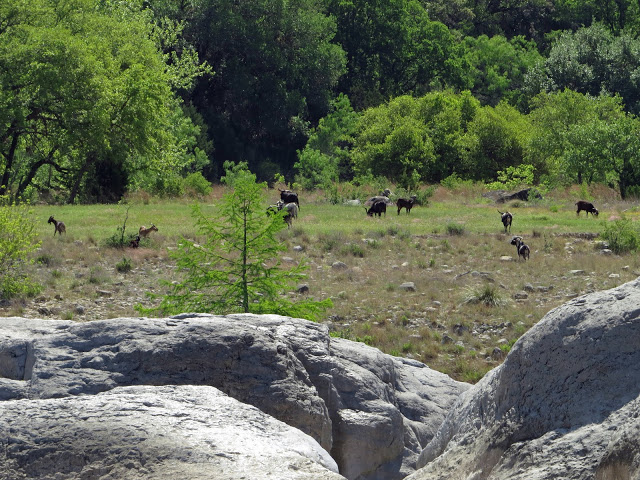 At that time there was a large pool below the falls with some world-class fishing. In fact you can still see the old road Herman Reiner, the owner of the north (non-park) side of the river, put in where Model-T's used to clatter down to the river and people would set up camps on the small flat over there while they fished, for the fee of a dollar a day. (more recently I've seen goats grazing those flats a time or two) 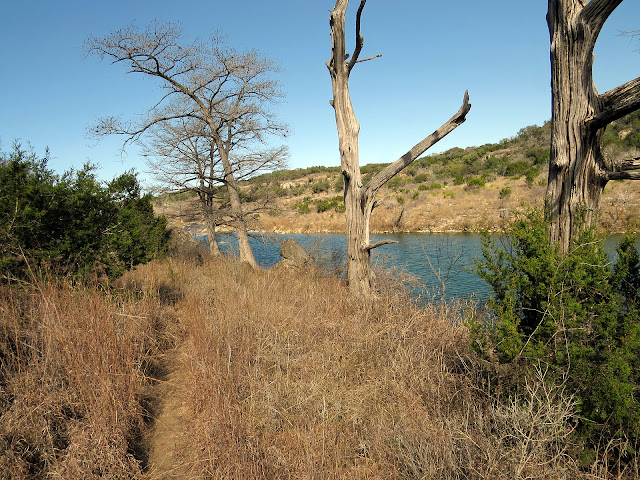 At the time of the Hackenburgs and Reiners there were huge Cypress trees (100 footers) lining the banks along here, but then the epic flood of 1952, when 9" of rain created a 60 to 100 foot wall of water, tore through here, stripping the Cypress and filling in much of the fishing hole with sand. (More recently, sometime in the '90s, I saw the results of a 30 foot flood here that went through the park a couple days before.) 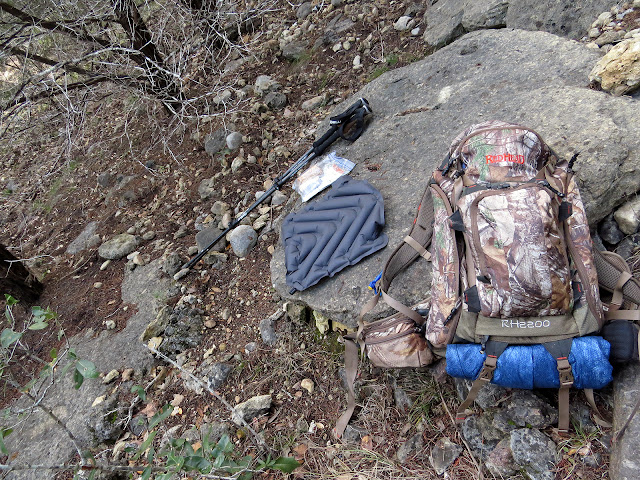 In fact, this perch I found above the trail for lunch was probably underwater then. (during the 52 flood) 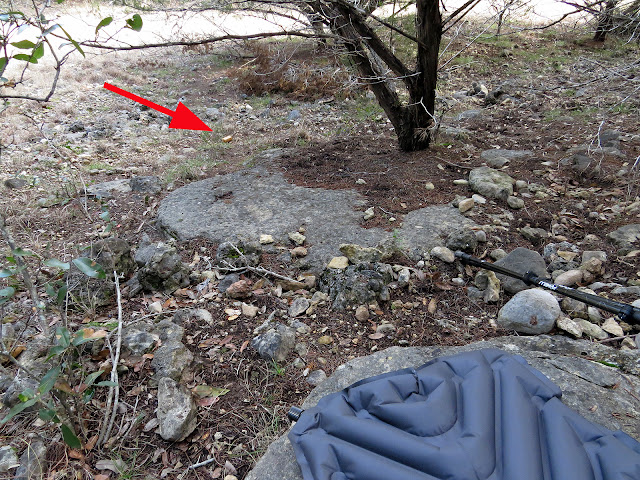 I had seen two other people near the falls a half hour ago so to avoid possible encounters with others I chose a lunch-spot well off the beaten path. But it might have been just a little on the steep side.
While drooling heavily with stomach growling mightily as I extracted my lunch from the pack, my sleeve of crackers escaped and rolled halfway back down the slope!
I just hope I have enough energy left to go back down and get it. 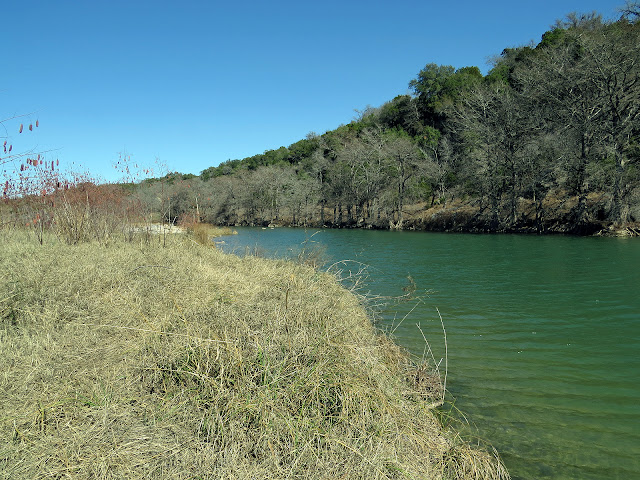 After lunch I did a little more exploring along this quiet section of river, (Here the far bank is State Park land as well but off-limits to the public.) 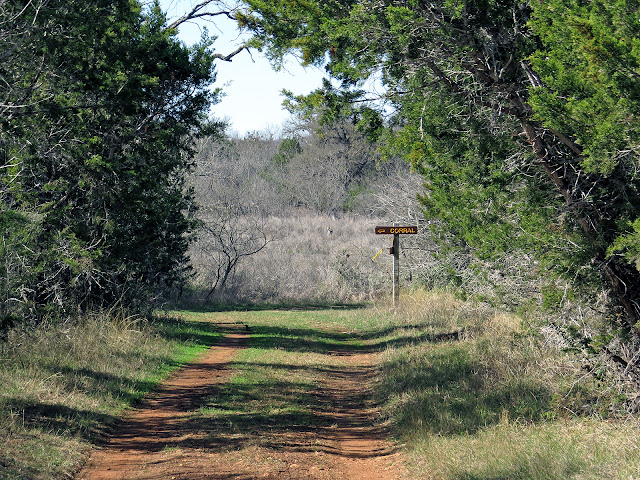 then, heeding the lengthening shadows of afternoon, finally began making my way back towards The Van. 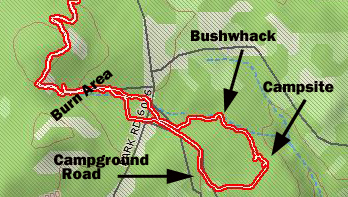 But after a day of solitary hiking the thought of finishing up by finishing up that last little bit along the campground road, on display for every camper there, just didn't appeal, so I set off cross-country and, using the drainage back there as a guide, bushwhacked my way into the campsite from behind.
After 10 miles of hiking today, am I ready to take on a 12 mile hike tomorrow?
I guess we're going to find out - next time.
Posted by greg at 1:57 PM