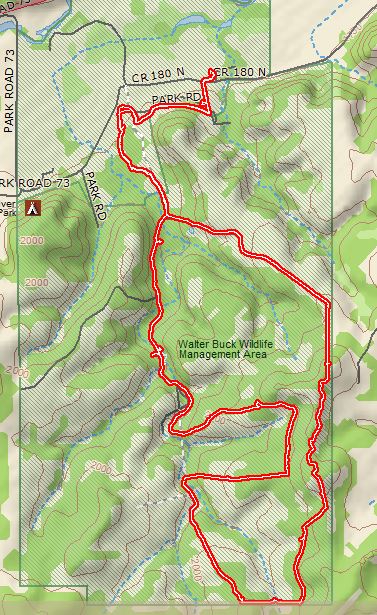 Yesterday's hike was a slow, gentle meander as I zig-zagged back and forth over on the east side of the park, picking up a few trails I hadn't gotten to yet this trip. 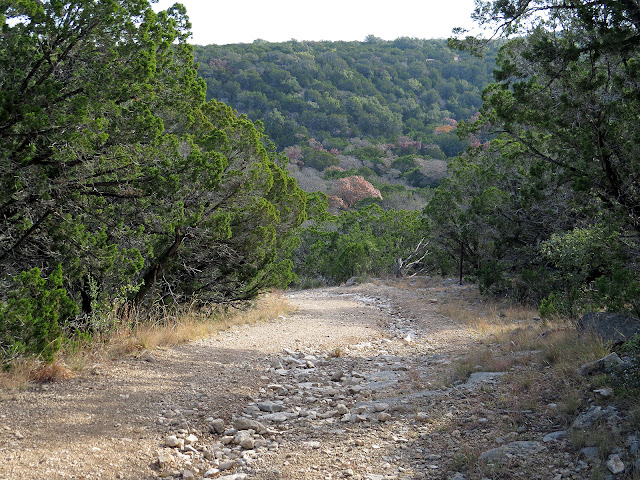 A pleasant hike but scant on unique photos and not really one worthy of a blog-post of its own.

Dad was a lifelong outdoors man and Mom, while admittedly a city-girl before she met him, embraced the outdoor life too, so I've always known how important natural spaces are for my well-being, both physical and spiritual, but I didn't really know how important until after I retired and had time to sit back, pay attention, and reflect. And it's often the less dramatic of outdoors spaces that provide the most fertile healing environments.

No extraordinary vistas, no peaks to scale, no cliffs to negotiate, just a nice gentle hike of the kind that creates a dichotomy of mind, at least my mind. On the one hand it's pretty much like meditation, moving meditation, where I'm in that coveted and peaceful now mindset of eastern philosophies. On the other hand my mind is free-form wandering, often coming up with brilliant and elegant solutions to the problems of society and the world or composing award winning blog posts. (Too bad I can never remember any of them when the hike is over - Though based on a review of some of my past posts maybe that's a good thing!)

Very satisfying, but as I said, not very blog-worthy. 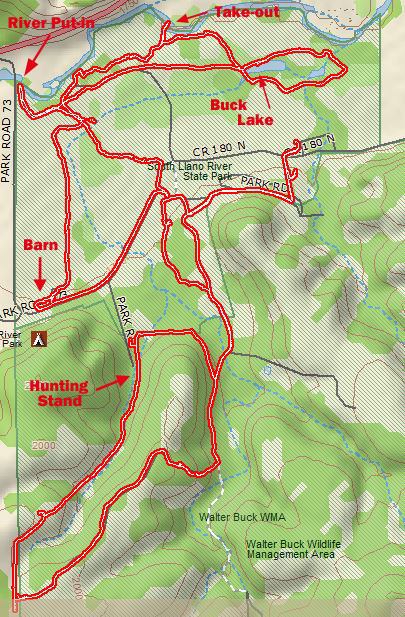 Today is moving day. No room in the campground, so I'm headed back home.

But first, since there's no sense in wasting the day by getting on the road too early, a couple of hikes.

The first one is there down at the bottom of the map above, around the West Canyon, but I've got to keep an eye on the time since I need to get back and move The Van off its campsite by noon. (I set out pretty early and didn't want to disturb those campers keeping more reasonable hours by starting The Van and driving out of the camping loop past them.) 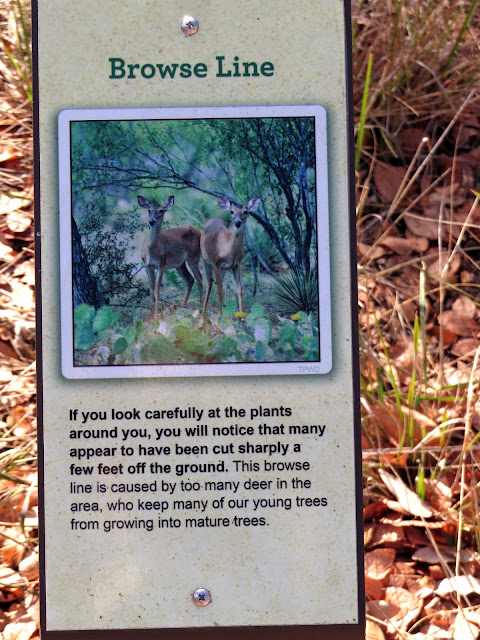 Much of the country has issues with too much deer population, and here is no exception, so while I'm not a hunter myself I do understand the management aspects of it. (Though I do object to the once-a-year citiot warriors that, in the name of proving their excess testosterone (Yes, that includes all genders) with guns and wall-hangings,  make hunting season more dangerous than it has to be.) 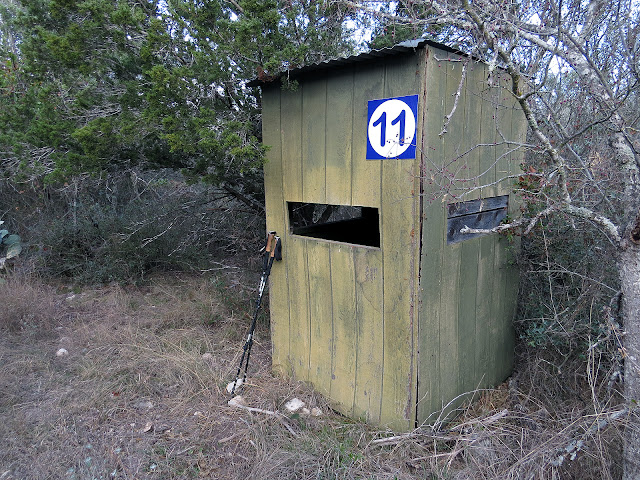 Some of the Texas State Parks have hunting blinds like this scattered about. 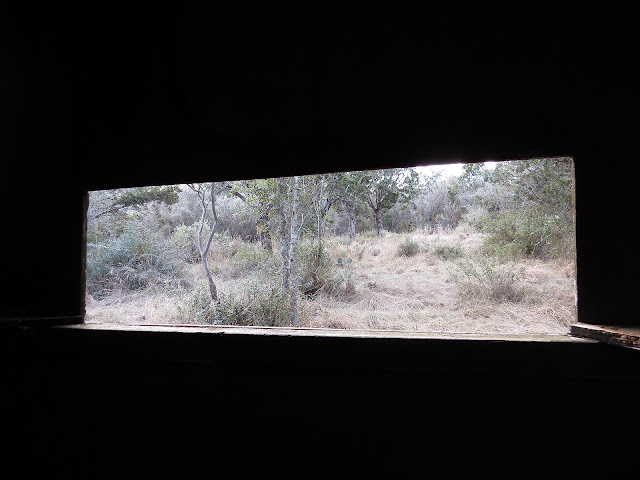 This time of year (November through the first part of January) selected parks will be closed on selected dates to all except those with hunting permits. There are both walk-in and drawn permits. Drawn permits often include a blind. 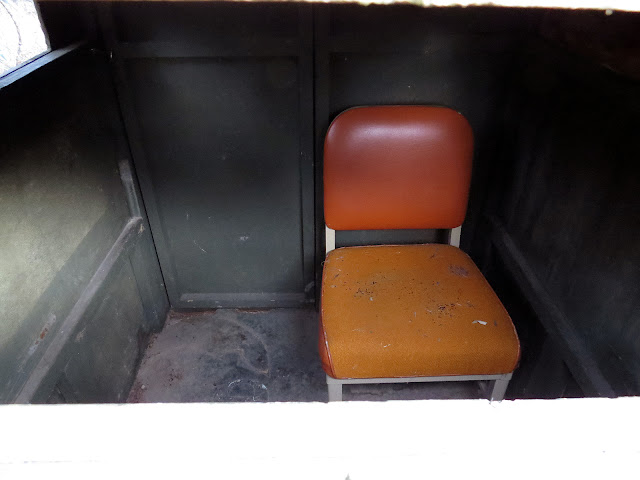 Most of these blinds are pretty crude. A plywood box with a door on the back-side and usually a raw-plank bench-seat that cuts across the door opening so you have to climb in over it.

This particular blind was pretty ritzy with a walk-in door and an actual chair inside. 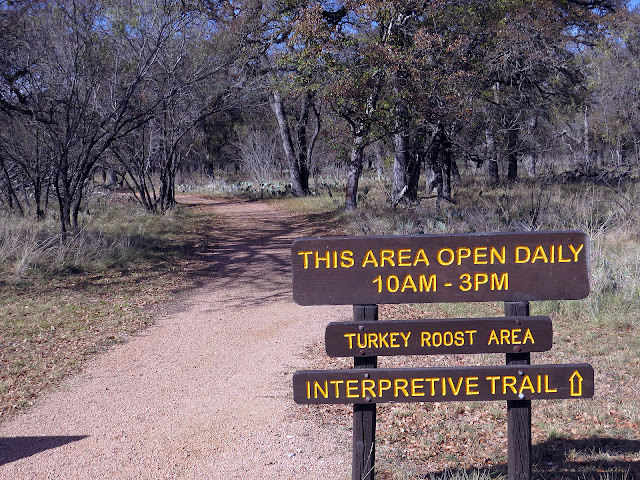 After finishing up the West Canyon hike I moved The Van over to a day-use area so the campground host could rake the fire-pit, which I never used, before the next camper turns up to take up temporary residence, and set out on my second hike, which was to weave around the bottom lands down by the river. 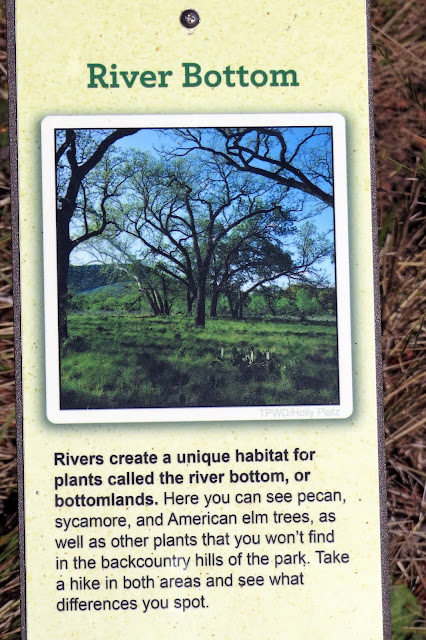 This area is a favored roosting site for the Rio-Grand Turkey so for much of the year is only open during the middle of the day when the turkeys are off doing turkey stuff, so I usually don't hike much in here. 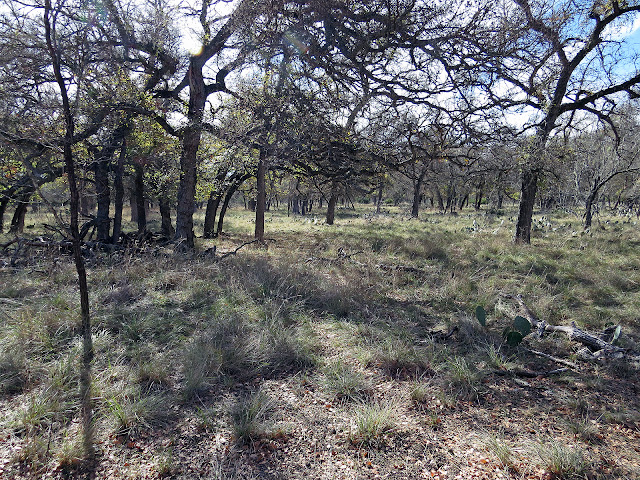 The habitat, and terrain, down here is quite a bit different than that found in the rest of the park. 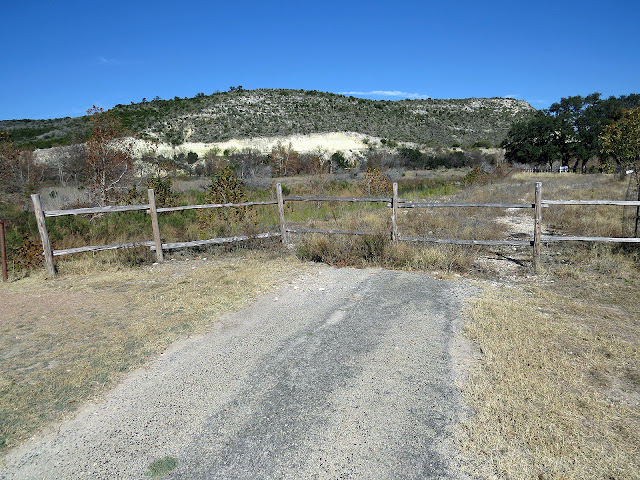 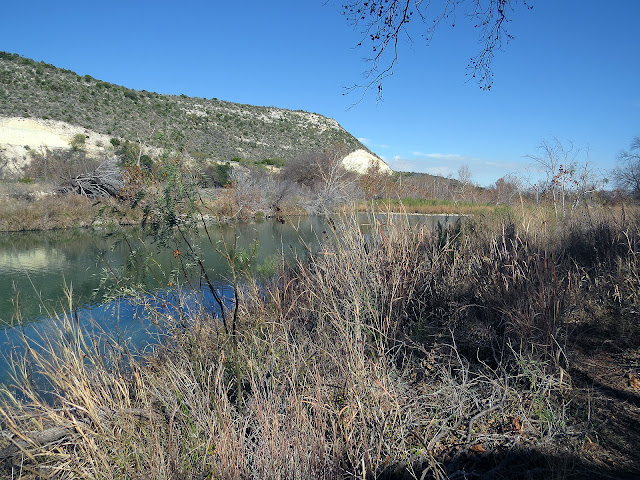 as the river meanders around with each flood, once in a while eating away the ground that trails used to stand on, 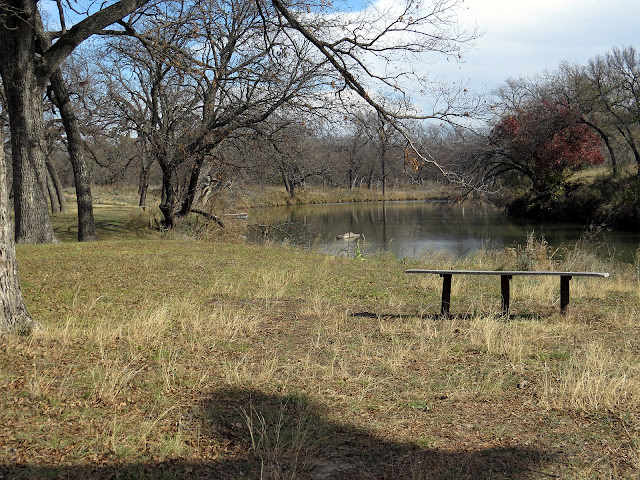 and on occasion getting wild enough to abandon the old riverbed altogether, leaving behind oxbows, such as this one called Buck's Lake.
I tried sneaking up on that bench, 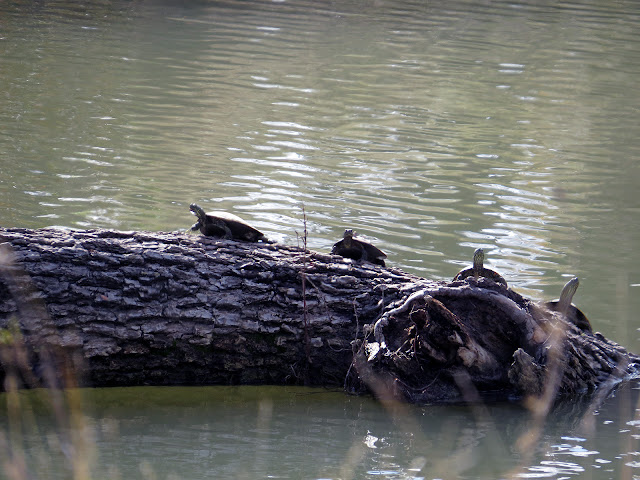 but I don't think I was very successful as the occupants of this nearby turtle-log were keeping a pretty close eye on me. 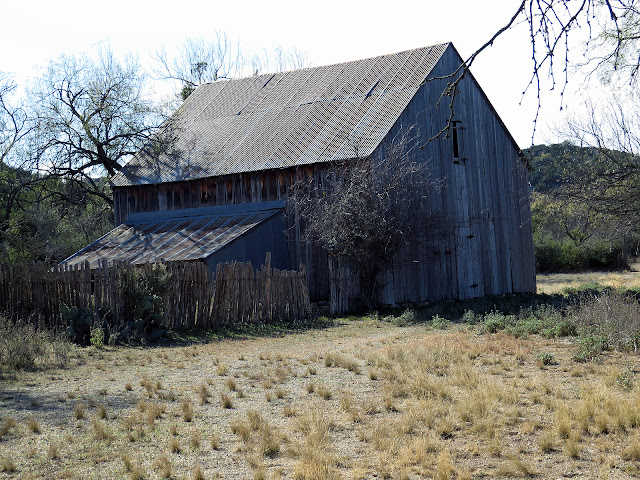 My final stop of the hike, and my stay, was this old barn. 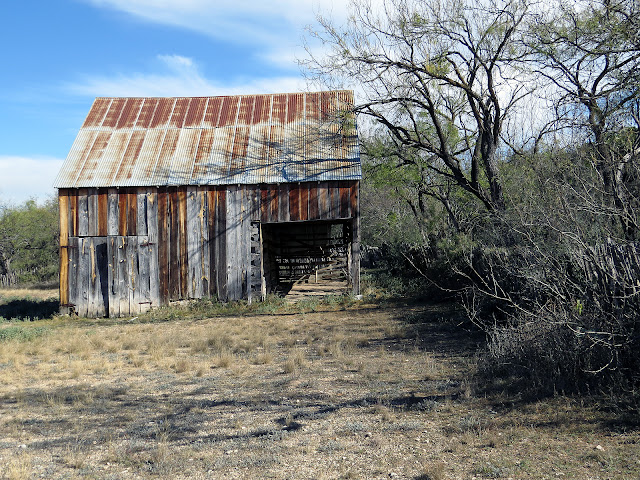 Probably the oldest building left from the ranching days. Unfortunately, instead of interesting information about its history, the only signs around the barn were those warning about the illegality of digging for or carting off artifacts, 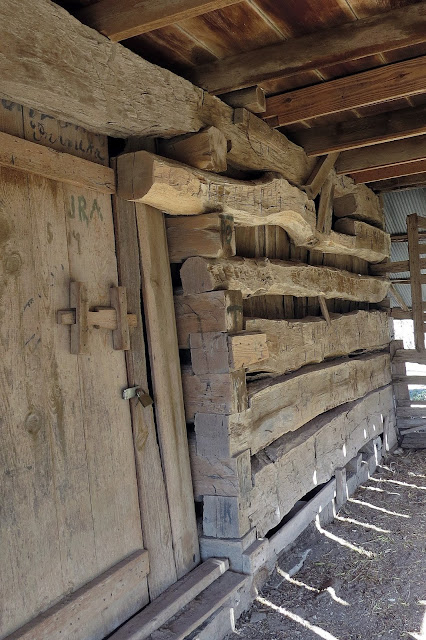 but I'm guessing this log barn predates the Buck family's purchase of the ranch in 1910.
I wish the park service would pay more attention to the history of these places, but this barn doesn't even rate a sentence let alone a chapter on the parks history page.
Oh, well, the sun is getting low and it's time for me to head down the road to a favored I-10 rest area for the night before making the final run to the house tomorrow.
So there you have it, another visit to one of the Texas State Parks. From here I can almost see a time when I'll be free to wander further afield again, but for now my next State Park reservation is lined up and waiting out there on the far side of the holidays and park hunting closures.