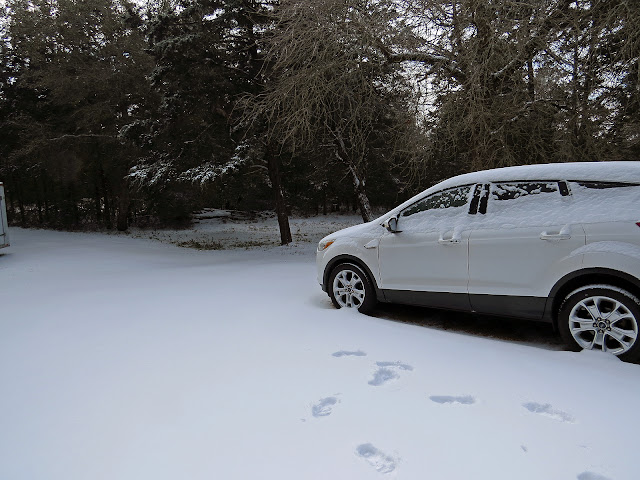 Hey! What the heck is this crap doing all over our stuff?!

Don't tell me 40 years of living in Texas has been nothing but a 30 second dream and it's actually 1981, I still live in Michigan, and now have to scrape the car off before I go to work!!! 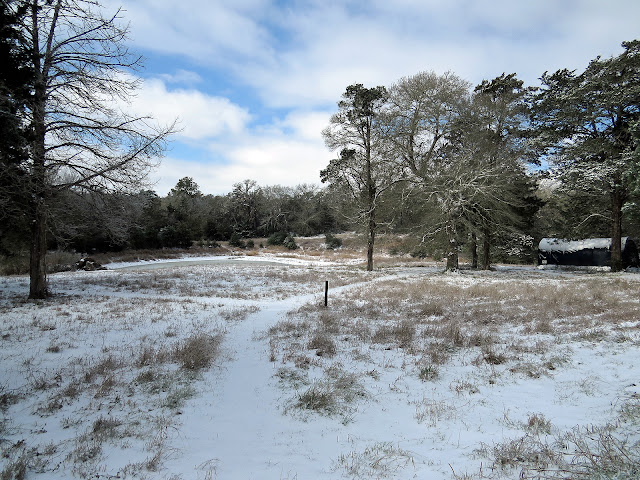 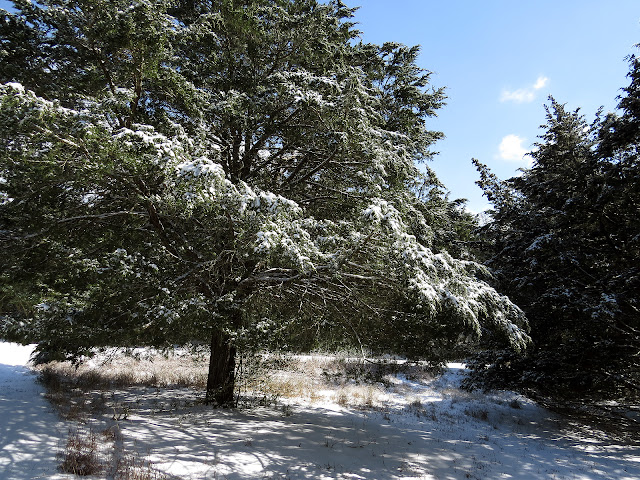 It dropped below freezing around here Friday afternoon (Feb 12)

We got a half inch of freezing rain Saturday

Sleet on top of the snow Monday- Tuesday

Freezing rain again on top of all that Wednesday

And now, on Thursday as I write this, sleet and snow are projected for this afternoon.

Oh, and it's not supposed to get back above freezing and stay there until Saturday. 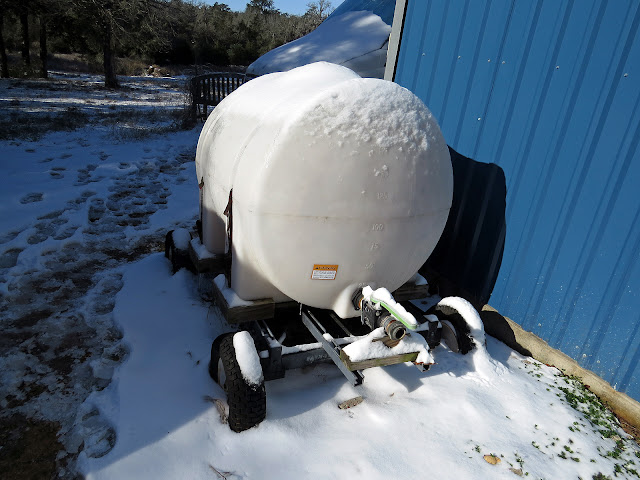 Around here a 'hard' freeze is anytime it drops down below 32 degrees for more than 6 hours.

For the past 5 days 28 has been our high and Tuesday morning it was 8 degrees.  (In this area when you see that the thermometer is reading 25 degrees and think 'wow! warming right up!', you know that it's been COLD!)

We've lived here on the property for 15+ years and this is only the second time I've had to drain the fire-pump storage tank because of an extended freeze. (Long ways from the nearest volunteer fire department so we have our own Forest Service rated fire-pump) The tank itself can take freezing, but the valve is more vulnerable and I don't like taking chances with it. (Yep, this should have been the third time I drained the tank, not the second. So I know from first-hand experience that the valve doesn't explode when frozen hard, it just gets these sneaky little splits in the body that don't show up until things thaw again.)  Not that I like dumping 250 gallons of our fire-fighting water supply on the ground either, but at least we have the pond we can draw water out of if we need to. 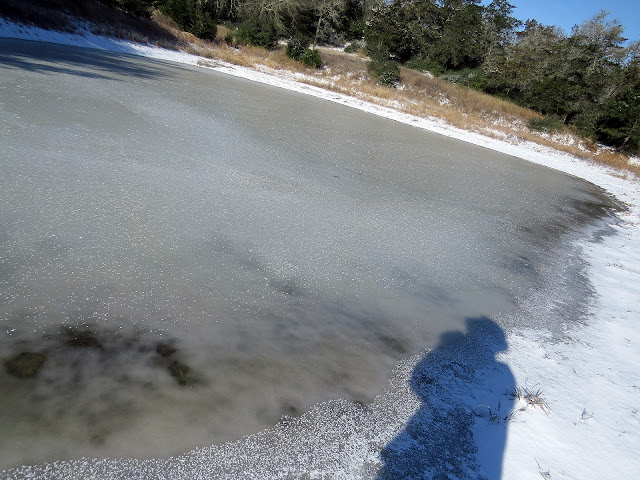 Oh yeah, I guess I should mention that the pond is frozen too - - - That's never happened before. Even a little bit!

Fortunately the ice is thin and can be easily broken through. 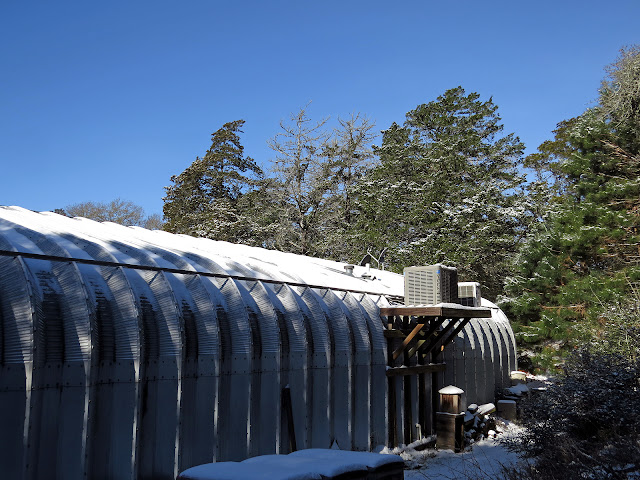 The unheated barn sits on an uninsulated slab in direct contact with the ground and the well-house floor is also directly connected to the ground, much of it bare dirt. And both are insulated with spray-foam. This keeps both buildings at a reasonable temp even when it's freezing outside.

Tuesday morning, when it was 8 degrees outside, inside both the barn and the well-house it was 38 degrees.

Speaking of well-house. One of the major impacts of these storms has been on the water supply, but since we have our own well, and a generator to run the pump with, we have not been affected by that at all.

In extreme cases, and I think this one qualifies, we do heat the corner of the barn where we live. That's this side of the barn and from where the vent-stacks are (the bathroom) on down to the far end. (our back door) It was nice to see that we weren't melting the snow and ice off the roof there any faster than off the  unheated parts of the barn.
The insulation at work.

Oh, about that heat for our living quarters, although we have been far more fortunate than many, we've only had it available for some of the time.

You see, for the past 30 years, about once every 10 years, following an extreme event like this, recommendations have been sent to ERCOT, the people in charge of the Texas power grid, and the state government to weatherize the system, including natural-gas wells and pipelines (much of Texas' power is generated via natural-gas but the wells and pipelines froze up, along with some of the generators, whether they were coal, natural-gas, or nuclear), but this being Texas, those recommendations have been ignored.

It's not a difficult task, everybody north of Dallas has winterized systems that function very well, but - well - after all, this is a state where speed-limits are barely a suggestion to be ignored (Or used as target practice) and foolish blowhards like Ted Cruz, who lets his 10 and 12 year old daughters talk him into a trip to Cancun (At least that's his version. Which makes him a terrible father for (A) raising entitled children that are going to be a strain on society in the future, (B) risking their health by dragging them to a Corona hot-spot, or (C) throwing his girls under the bus as scapegoats for his own bad decision-making.) in the midst of a pandemic and a winter storm that has many of his constituents literally freezing to death, can still get themselves reelected. Although, to be fair to Texans, he only won this last time by less than a single percentage point.

Between unprecedented (Yes Brewed Journey, I did use 'that word', and I think with some all-time records being set I used it correctly - though I could be wrong - I, as The Wife points out, often am.) demand and low supply, the result is that the power-grid was, actually still is as I type this, crippled.

I was impressed with the tiny electric coop we are supplied by out here since the day we bought the place. Unlike when we lived in the city and the meter-reader came tramping through the yard every month and the power went out frequently, as far back as 20 years ago every meter in the coop's territory could be read by someone sitting at a desk back in the main office. (The meters also automatically report outages back to the maintenance department as well as provide our hour-by-hour usage data that we can access on-line.) and the power has been remarkably reliable.

Back when planning this place, given the number and frequency of outages we experienced in the city, we did expect to be dealing with even more of those out here in the remote sticks where we are near the far end of a long feeder line. But I was wrong. As I said, the power here has been remarkably reliable. Even when hurricane Harvey sat nearly on top of us for a day or so, we didn't lose power. (The coop comes through every 5 years and trims trees back away from the power lines so it's rare that a falling branch or tree hits a wire.) 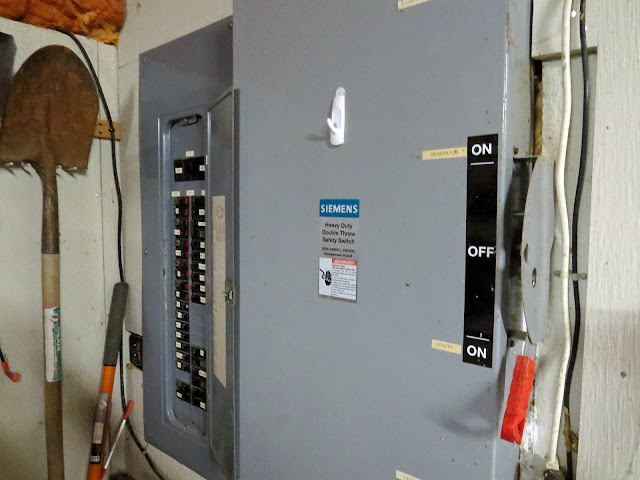 Not without its costs, but even knowing how reliable the power out here is, probably something we would still do anyway because being prepared is worth it, especially when it's needed.

Having said that, even in these current circumstances of a crippled power-grid, our little rural coop continues to shine.

Yes, we have been subjected to the same load-shedding that has left hundreds of thousands in the big cities without power for days now, bursting pipes to the point where the water-systems are in big trouble too. But in our case they have taken the form of rolling blackouts that have been pretty much an hour off followed by an hour on for the past 4 days. And though the grid situation has only improved marginally overnight, leaving huge numbers still without power for extended periods, and I still expect power cuts here because this isn't over yet, (I can hear that it has started sleeting on the barn roof again) we have had power continuously for about 8 hours so far this morning. 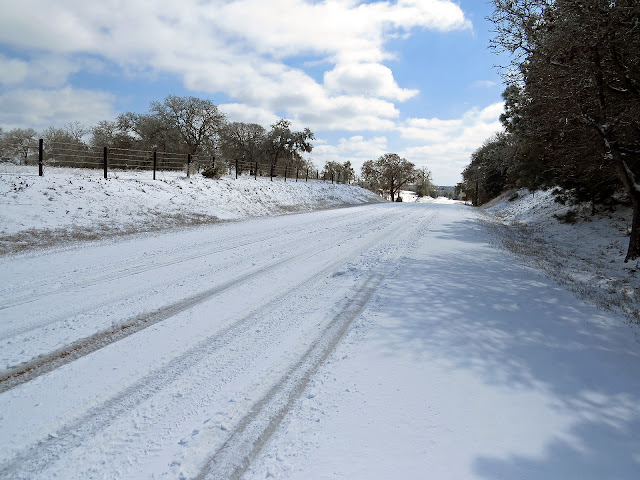 For much of the country the 3 to 6 inches of snow we got here is no big deal, even though it fell on top of a half inch of ice, but around here we don't even own snow-shovels let alone snow-plows. So all that snow laying on top of ice is still there on our county roads days later. 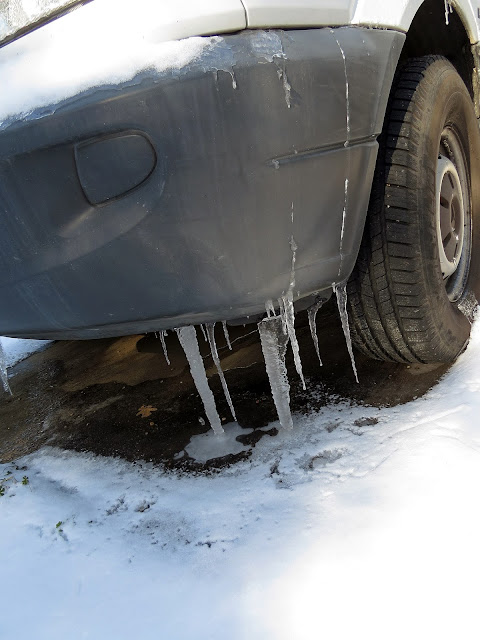 But even though The Van isn't going anywhere anytime soon because we have plenty of supplies and no jobs to get to, there are priorities. 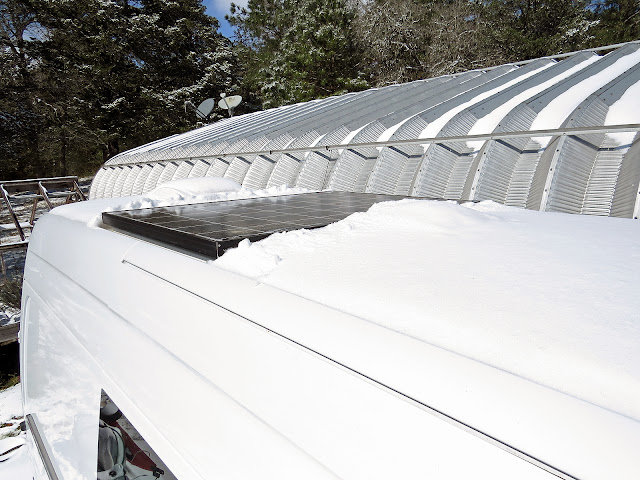 Such as sweeping off the solar panel so the layer of ice can melt and we can use The Van as a giant recharging station for our phones and the little portable DVD player we have been using for entertainment in the evening. (Even when there is power it takes the DirecTV box nearly a half-hour to reconnect itself and rebuild our list of recorded shows and by then we are only a half-hour from the next power-cut) 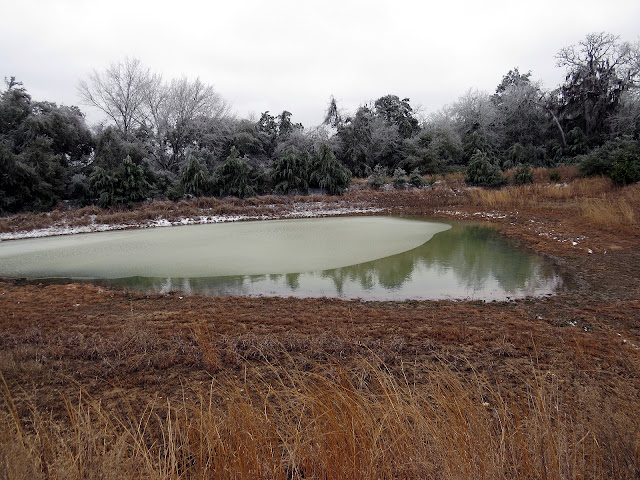 But things are starting to look up.

Even though it hasn't gotten above freezing for days, it isn't as bitterly cold anymore and the residual heat in the ground is making progress on getting rid of the snow and ice.

We may actually, briefly, get above freezing later today, Thursday, (we did hit 33 for a whole hour Thursday afternoon halting our 'below freezing' streak at 144 hours, an all time record.) and Sunday is forecast to be above freezing for the whole 24 hours. 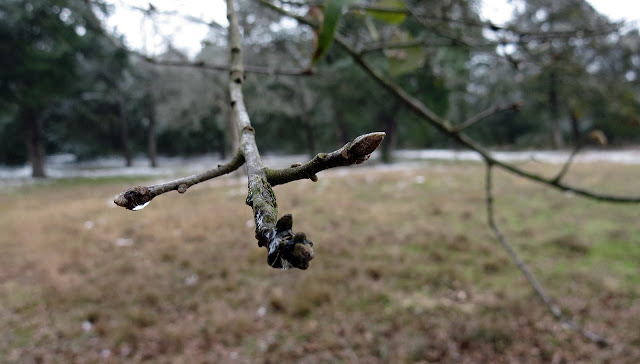 I wonder what the effect of this cold-snap is going to have on our trees and wildflowers. The oak down by the pond, the first one to do so every year, was already budding out and the wildflowers were throwing out their ground-hugging leaves before this all happened.

The spring garden (We start planting chard, spinach, radish, and carrots in mid January and herbs and potatoes in mid February) is already screwed and by the time we get it restarted the summer heat is probably going to get at it before we can harvest much.

This series of storms proved fatal for some and was uncomfortable for most, but if you're looking for a good side. we all need to be knocked out of the complacent rut dug by the clock, schedules, and routine once in a while. It reminds us that the underpinnings of our comfortable lives are actually very fragile and that we should always be prepared for when those underpinnings get knocked over, because they will.

Once it gets above freezing this morning the forecast projects it will stay that way - at least through the next week.

The official stats for the past week: