Heading for the high ground 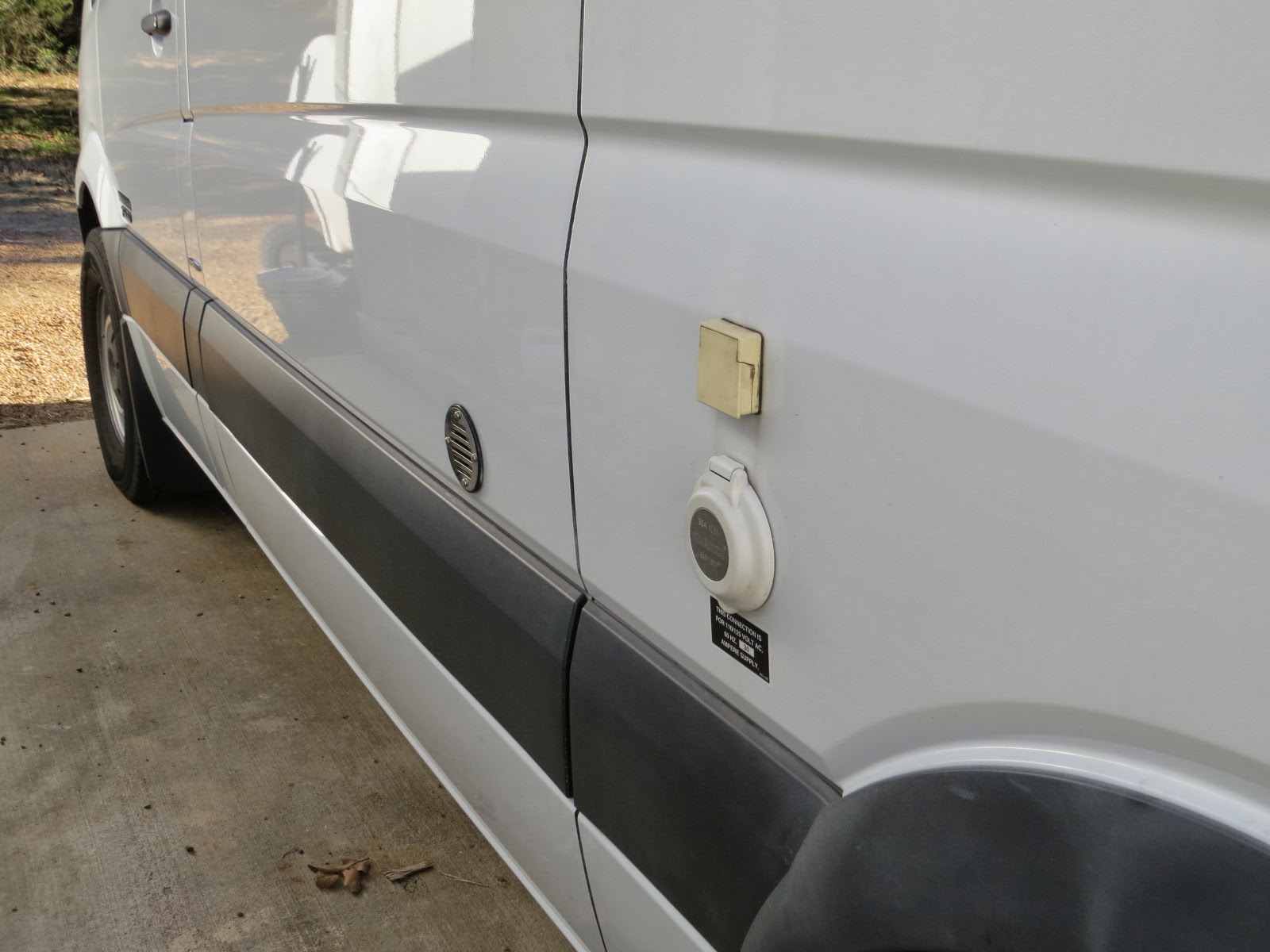 Now that we’re done with the interior we’ll briefly jump up to the roof, but before that I’ll point out the shore power and cable TV connections just forward of the driver’s side rear wheel and the battery box vent forward of those. With the exception of a few openings in the roof which we’ll get to next, these are the only modifications made to the outside of the van, making the air conditioner sitting on top the most obvious indicator that this is anything more than just a working van.


OK, now to the roof. Starting at the front there’s a short, magnetic mount CB antenna. A longer one would be more effective at pulling in signals but the short one only sticks up as high as the top of the air conditioner, the highest point on the van. Not only does it keep my vertical clearance requirements at a minimum, it also comes in handy as a feeler gauge for unmarked overhead obstructions such as low hanging branches. I creep forward and if a branch is too low it tilts the antenna and I can hear the heavy magnetic base rocking around up there so I know to stop before something bad happens. If it doesn’t rock I know the obstruction will clear the AC unit as well.


Just behind that antenna is an RV style roof vent. This one is pretty fancy, and pricy, but I would certainly install one again. It has a little motor to open and close the lid, which seems a little decadent, but the vent also has a rain sensor that will automatically use that motor to close the lid when it starts getting wet. Then when the rain has stopped it opens the lid back up again. Very handy and no worries about leaving it open and walking away. The vent also has a three speed fan mounted in it which can be set to pull air in or blow air out, and it has a thermostat on the fan so you can have it come on and turn off based on the temperature inside the van. It also turns off automatically if the lid closes. By opening the awning windows over the gaucho along with the roof vent, you can set up a pleasant breeze and keep the place well vented, very important in a small space where the cloying scent of cooked cabbage, or even a small fart, has nowhere else to go. If you need more breeze, (Maybe that fart wasn't as small as you thought?) just turn the fan on. If necessary the lid motor can be bypassed and the lid cracked open manually just a little bit, useful for ensuring a little ventilation during cold evenings when using the propane heater.
Beside the vent and just ahead of the 180 watt solar panel is that dinky little, not very effective bat-wing style TV antenna I mentioned before.  The good points are that it is low profile, doesn’t cast a shadow on the solar panel, has no moving parts and you don’t have to remember to lower it before driving off. The bad point is, it doesn’t really work all that well, in fact it pretty much sucks.


The 180 watt solar panel adds about 30 lbs up high where I least want it, but it is a very important part of what makes the whole rig work which I'll come back to later.


Taking up most of the remaining space on the roof is the air conditioner. I can’t say I’m a fan of this thing, it’s big, it’s heavy and it’s noisy, but it’s also a necessary evil when you’re based in the deep south and was especially important when I was living in the parking lot at the office.


Because of space restrictions the air conditioner is mounted quite far aft in the ceiling, whereas I spend most of my time at the forward end of the van. This is where the small tower fan that lives in the cupboard below the refrigerator comes in handy. When the air conditioner is running I plug this fan in and set it on the floor under the air conditioner where it helps move the chilled air forward to where I actually am. It runs on 110 volts but that’s no problem since I have to be plugged into shore power to use the AC anyway. 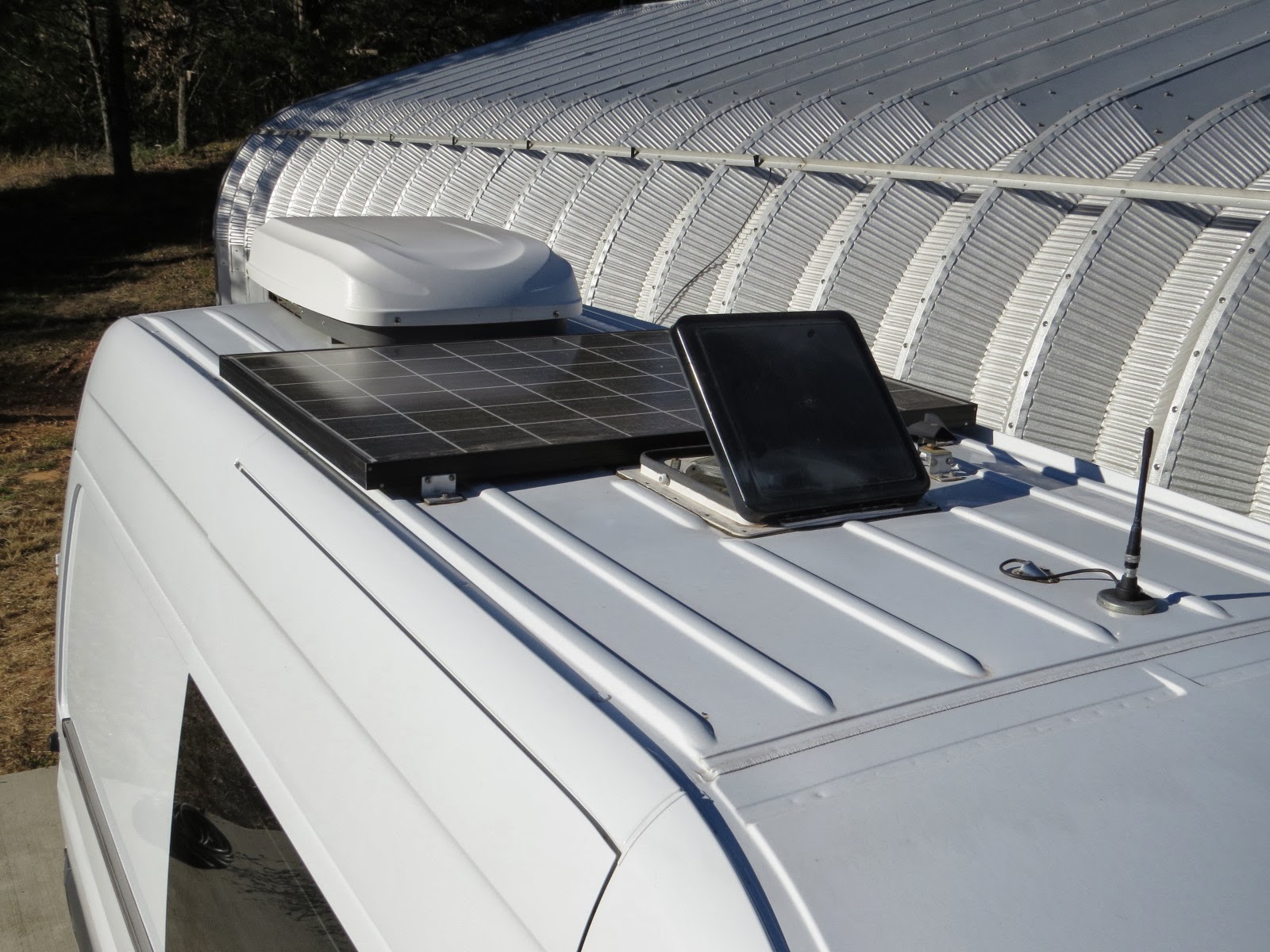 The last little thing up there on the roof is the camera for the remote rear view monitor. It's mounted just above center brake-light over the doors. Unlike the Ford van, there’s just enough curvature to the rear of the Sprinter that I can’t see the hitch ball, not unlike a fat man trying to see his own – well, you know – so I had to get used to estimating those last few inches when hooking up a trailer, but other than that it is pretty handy for keeping me from running over that very helpful, if not extremely competent, passer-by that insists on guiding me into my campsite, and the lens is wide-angle enough that if I'm forced to pull nose-first into one of those horrible angled parking spots I can actually see oncoming traffic and know when I can safely back out.
Posted by greg at 6:00 AM