Being a (former) scientist and engineer I like it best when things are neatly classified and ordered, so let’s start up front and work towards the back.


The Mercedes Sprinter comes with so many lights on the dash I have to keep the owner’s manual handy to figure out what’s going on,  (Not too long ago a headlight burned out and I had to pull over and check the book to figure out what the idiot light on the dash was trying to tell the idiot behind the steering wheel!. . .) but there just aren’t enough gauges for my taste, for instance; I know a light will come on if the engine overheats, but wouldn’t it be nice to know that the coolant temperature was creeping upward before that actually happened?; so I added a DashDAC that plugs into the diagnostic port you find on all modern vehicles.  It lets me customize the display to monitor all sorts of things as well as read, and sometimes clear, fault codes. A bit expensive, but very handy.


I have a CB up front too. Many people ask why I bothered installing this as it’s so old school, but I can’t tell you how many traffic jams I’ve been able to avoid because I had the CB chatter on in the background. Recently I was in Arizona and because of the CB my 80 year old mother and I were able to park comfortably at a rest area and have a leisurely lunch and even get in a little reading while we waited for the wreck out in front of us to be cleared and the road opened again rather than being trapped out there on the road in a long line of stuck traffic. I also use the weather radio function of the CB regularly, especially when traveling the Midwest during storm season and I see those big, scary, dark clouds piling up out there on the horizon. And up there on the windshield, blocking the rearview mirror (Great for keeping an eye on my kitchen counter while I’m driving but otherwise useless in a van with no windows in the rear doors!) is the monitor for my remote rearview camera.


In the generous space between the front seats I have installed a mobile laptop mount adjusted so my laptop sits within easy view but I can still get up and slip past it to the rear of the van. Using mapping software from Delorme, my laptop is also my GPS. I like the nice large screen that I can split and simultaneously have both a wide angle as well as close-up turn-by-turn view of where I am and where I want to go and can’t imagine trying to navigate with the tiny little screen you get with a more compact GPS. I have a small puck-shaped USB GPS receiver that I plug into the laptop and throw up on the dash right over one of the many available vents so it stays nice and cool even on the sunniest days. (After about two years of abuse I fried my first GPS receiver up there on the dash before I figured out the whole vent thing. . .)


I plan trips on the same software. When I have WIFI (Hint, park as close as you can get to the dining area of many McDonalds and you can surf without having to go inside, though if you try this when the place is busy you might find the link overloaded.) I can research places to go and things to stop at and pin little markers and notes and routes right on my map.


When not acting as my GPS the laptop comes off the mount and onto the counter, or the picnic table, or my lap and the mount – well – demounts – with one lever and the whole thing gets thrown onto the driver’s seat until I need it for the next day’s traveling.


As long as we’re in the driver’s seat, notice that I have a pair of carabineers chained together, (OK, you will have to use your imagination because they didn't make it into the photo above.) one is bright pink and large enough to snap over the steering wheel and the other, a little less neon, but small enough to clip to my shore power cord and stay put without slipping over either end. Whenever I hook up to shore power I move the carabineers from the power cord to the steering wheel, reversing this when I unhook. That way if I ever manage to forget I’m tethered to the power post, there’s no way I can miss the big, hot pink carabineer dangling there from the steering wheel. (If you’re guessing that at some point in my past I maybe once drove off and tore the power inlet right out of one of my rigs, you might be right. . .)


And before we leave the driver’s seat notice the label with the vertical clearance of the rig in big black font stuck on the dash right there in front of my face. As soon as I took delivery of the van I parked on a level spot, got out my longest level, a tape measure and a ladder and figured out just how low an obstruction I could drive under then added a couple inches for safety. (My ex father-in-law once drove his truck under the same 13’6” bridge he had been ducking twice a week for years only to tear the roof off one of the brand new, factory fresh cars he was hauling because there was just enough snow and ice on the road to raise him up that critical inch!) Having that vertical clearance plastered on the dash helps make sure I don’t forget how tall the van is so I don’t ruin my day trying to drive somewhere I don’t fit. (So far this is one stunt I have managed to avoid doing, ever!)


There are a few other things worth mentioning up here in the driving compartment, at least I think they’re worth mentioning. Mounted to each door, within easy reach of both driver and passenger, are a couple of those florescent, glow-in-the-dark emergency tools for cutting jammed seatbelts loose and busting out windows. There’s also little molded shelves mounted above the windshield on both the passenger and driver’s sides. The passenger side carries a good pair of binoculars, a spare compass, my current paperback and the owner’s manual for the van. The driver’s side shelf carries registration and insurance papers, CD’s, a small container of sunblock, (Where it’s handy when the weather’s nice and I roll the window down and hang out it like an ecstatic dog.) and one of those LED lamps you can strap to your head. There are other little cubbies scattered around where I keep miscellaneous things including charging cords. 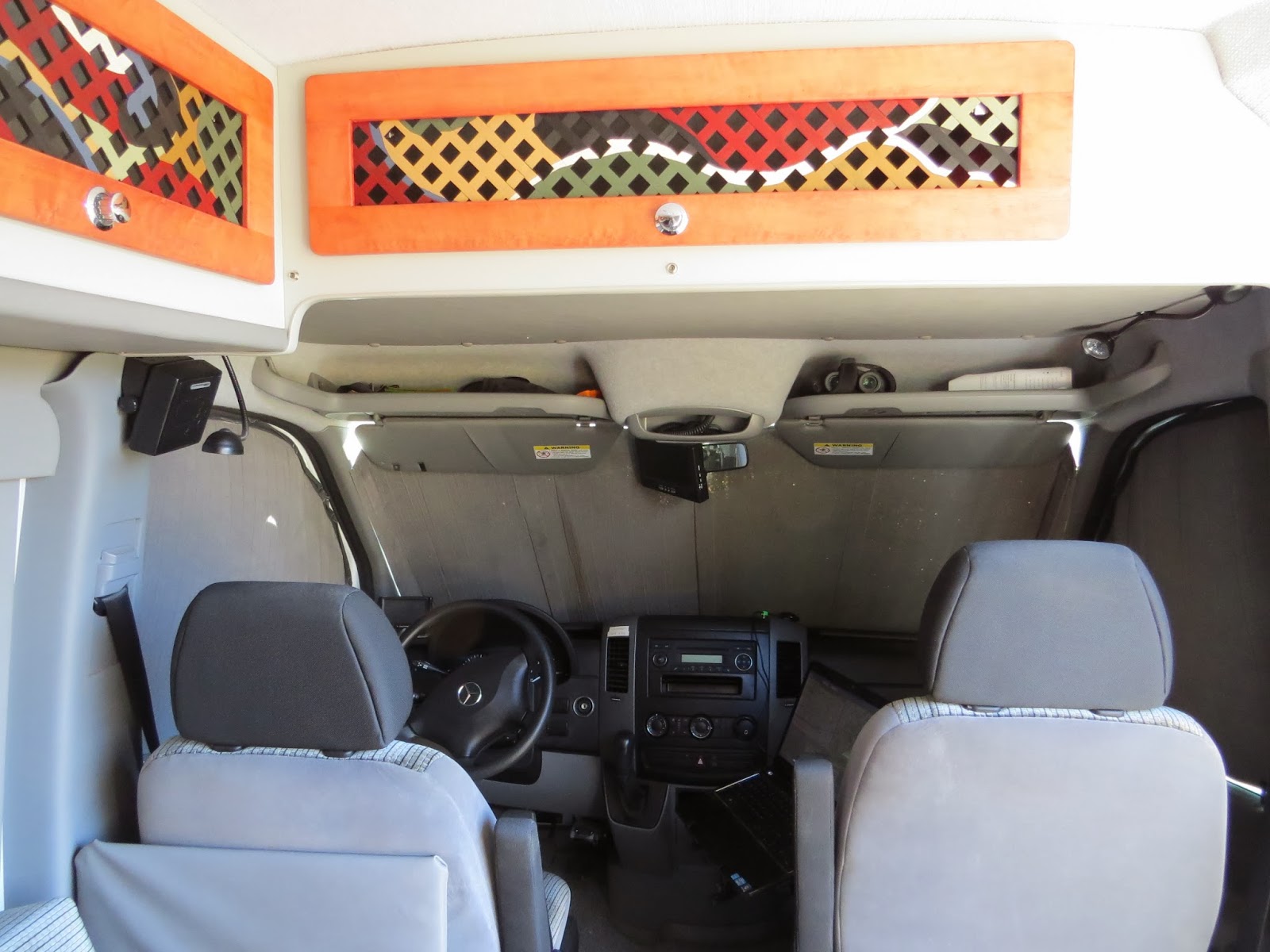 Overhead, spanning the entire cockpit, is a storage cabinet where I keep lightweight things like a spare blanket, the insulated windshield and side window covers, all rolled up and tucked away when I’m driving and need to – well – see, as well as the folded up stealth curtain, which I’ll get to later (Much later as it turns out. Boy! I sure am long winded!). Though I had the van built for me I did make all the cupboard doors in my own shop and the inset panels are painted to match the rugs that cover the marine-grade vinyl flooring which is very durable but has a texture that is kind of hard on bare feet.


The fuse block for the van; and there are a ton of fuses for this thing!; and the base unit for the CB pretty much fill up the pedestal for the driver’s seat but inside the pedestal for the passenger seat there’s plenty of room for me to keep spare light bulbs and fuses, a folding shovel and several towels for washing /drying the van. In a little cubby behind the driver’s seat I keep a rechargeable dust buster, a small collapsible tripod and my camera bag. In the cubby behind the passenger seat is a fire extinguisher. Mounted above each of these seats are LED reading lights mounted on flexible arms.
In the middle of the dash is molded a large, flat tray designed to hold the clipboard delivery drivers tend to keep their paperwork in. Since I don’t need it for this I keep my Dad’s last pair of work gloves up there. He was also an avid camper and traveler and he worked with his hands all his life so after we buried him one of the things I brought back with me was the gloves sitting on his workbench. Now he’s riding on the dash, still camping and traveling and seeing the sights.
Posted by greg at 7:22 AM