When parked for the night the passenger seat swivels around to face the rear and becomes my ‘man chair’. This is where I spend much of my time eating, reading, messing around on my laptop or watching TV (Yes, horror of horrors, I have a TV, though the puny little roof mounted antenna doesn’t work all that well. Ahh for the days of analog where you might not have anything but snow on the screen but could at least still hear what was going on.) That well placed LED reading lamp mentioned before, and a swing up counter extension make this a very handy and comfortable little library, dining room and office. 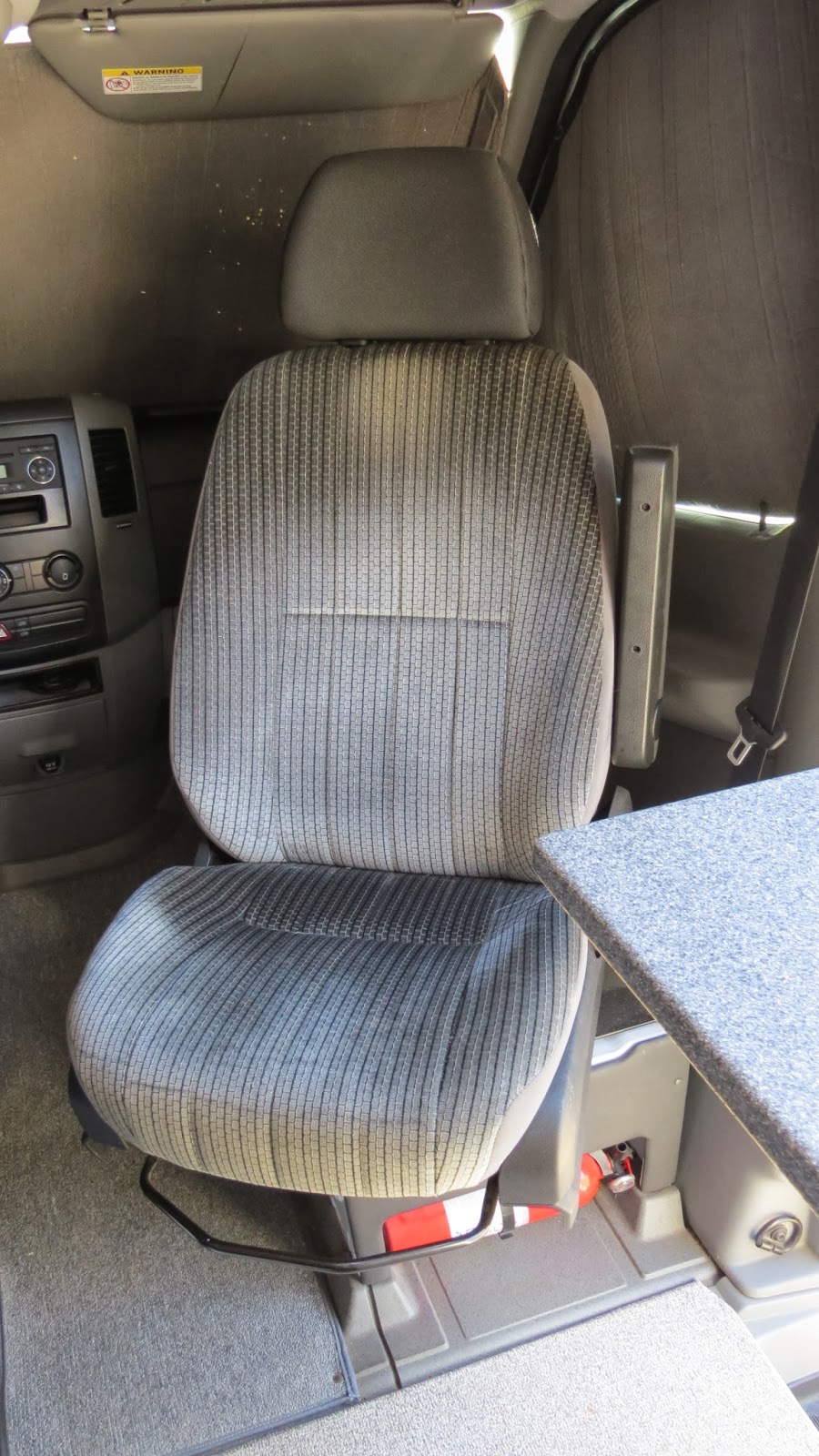 My current book is within easy reach, my computer bag tucks back out of the way but handy against the seat pedestal under my legs, my snack and drink are at hand on the counter extension and the step for the side door adjacent to the seat becomes my boot storage so I can prop my feet up on the end of the nearby couch without messing it up too bad. Very nice.


Behind the driver’s seat is a couch; in the RV world officially called a gaucho but I don’t know why since I've never seen it wearing chaps and riding a horse; whose primary purpose in life is to be my bed. Disguised as a couch during the day, at night I remove the back cushion and prop it on end out of the way against the rear doors, revealing the bedding which was  rolled up and hiding behind it. 15 seconds to pull the bedding into place and I’m down for the night. In the morning just shove the bedding back against the wall and drop the back cushion into place to hide it. A multi-tasking piece of furniture that is quick and simple to use. 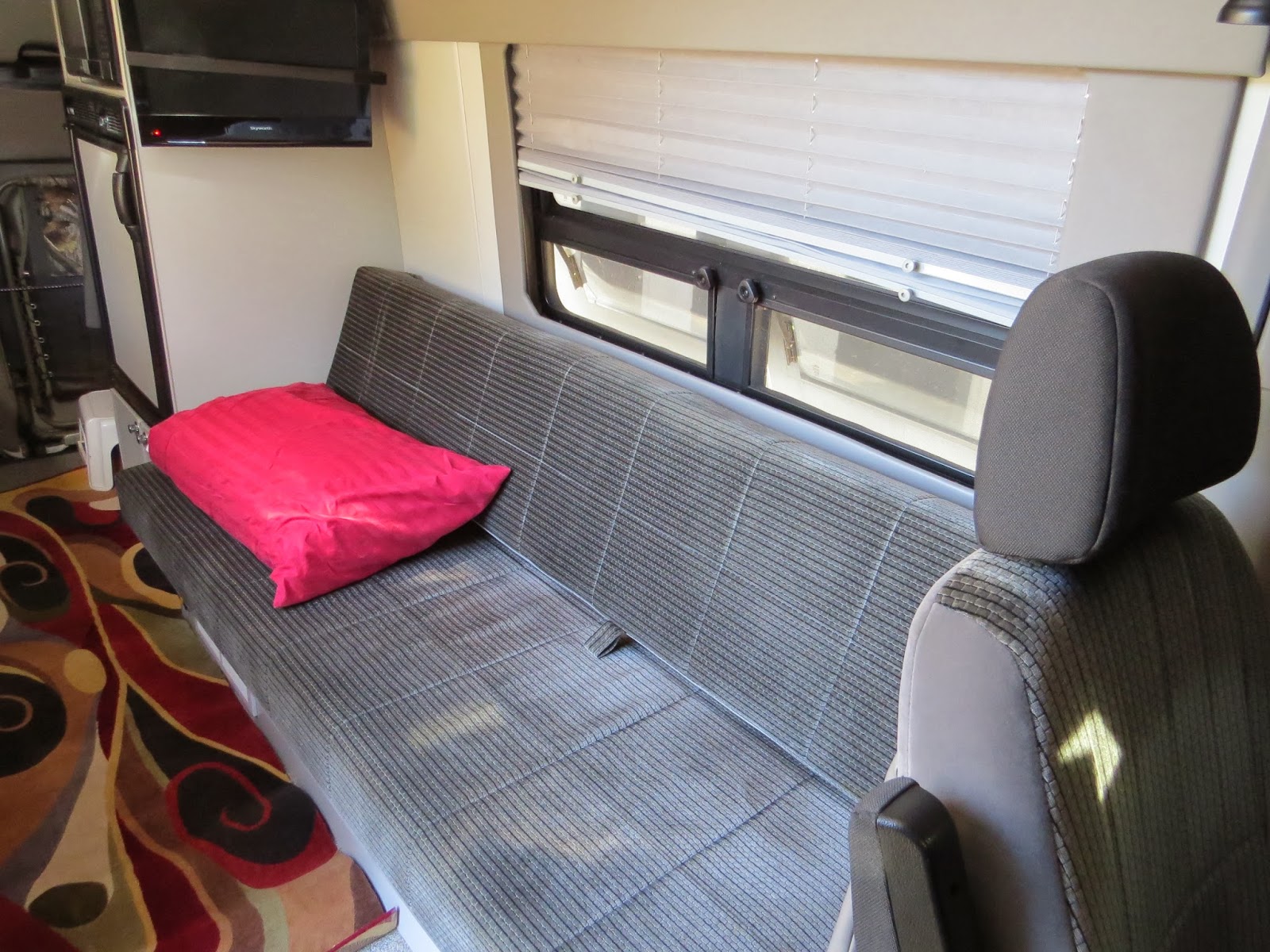 If I ever need more bed space the bottom cushion pulls away from the wall on slides and the back cushion drops neatly into place forming a double. (I should point out that my wife is not a camper, or even much of a traveler, and I’m pretty sure she would frown on me sharing my bed with someone else, so I’ve never actually used this feature - Honest, cross my heart and hope to die!)


There are seatbelts tucked away under the couch and I have used them the few times I’ve driven somewhere with more than one passenger on board.


Under the couch is storage accessed by lifting the bottom cushion. Under here are housed the two house batteries, the inverter/charger, a box of three reflective emergency triangles, spare windshield wiper blades (Too long to fit under the passenger seat with the spare light bulbs and fuses), 12 volt air compressor, sleeping bag, ground pad and an inexpensive pop-up beach shelter I use to signal that my camp site is actually occupied when I drive off in the van for a day trip. I also keep a large lidded plastic container under there. This could be used for a lot of things, like an impromptu punch bowl, a picnic-table top sink, or maybe an emergency foot-soaker, but I most often use it as a big bowl for mixing ingredients of my own homemade trail mix which I then bag in serving sized zip locks; much more affordable than store bought mixes and I get to put in what I want, not the cheap leftovers some factory is trying to use up.


Above and spanning the full length of the couch is another overhead storage compartment long enough to have three swing-up doors.


Behind the forward door is where I keep a straw hat for sunny days, a Tilly hat for when it’s wet outside, a couple of different knit caps and cold weather gloves for when its, as you’ve probably figured out, cold outside. This space is also where I keep my liner socks, which, when worn under regular socks, are great for keeping my feet dry and reducing hot spots and blisters when I’m hiking. 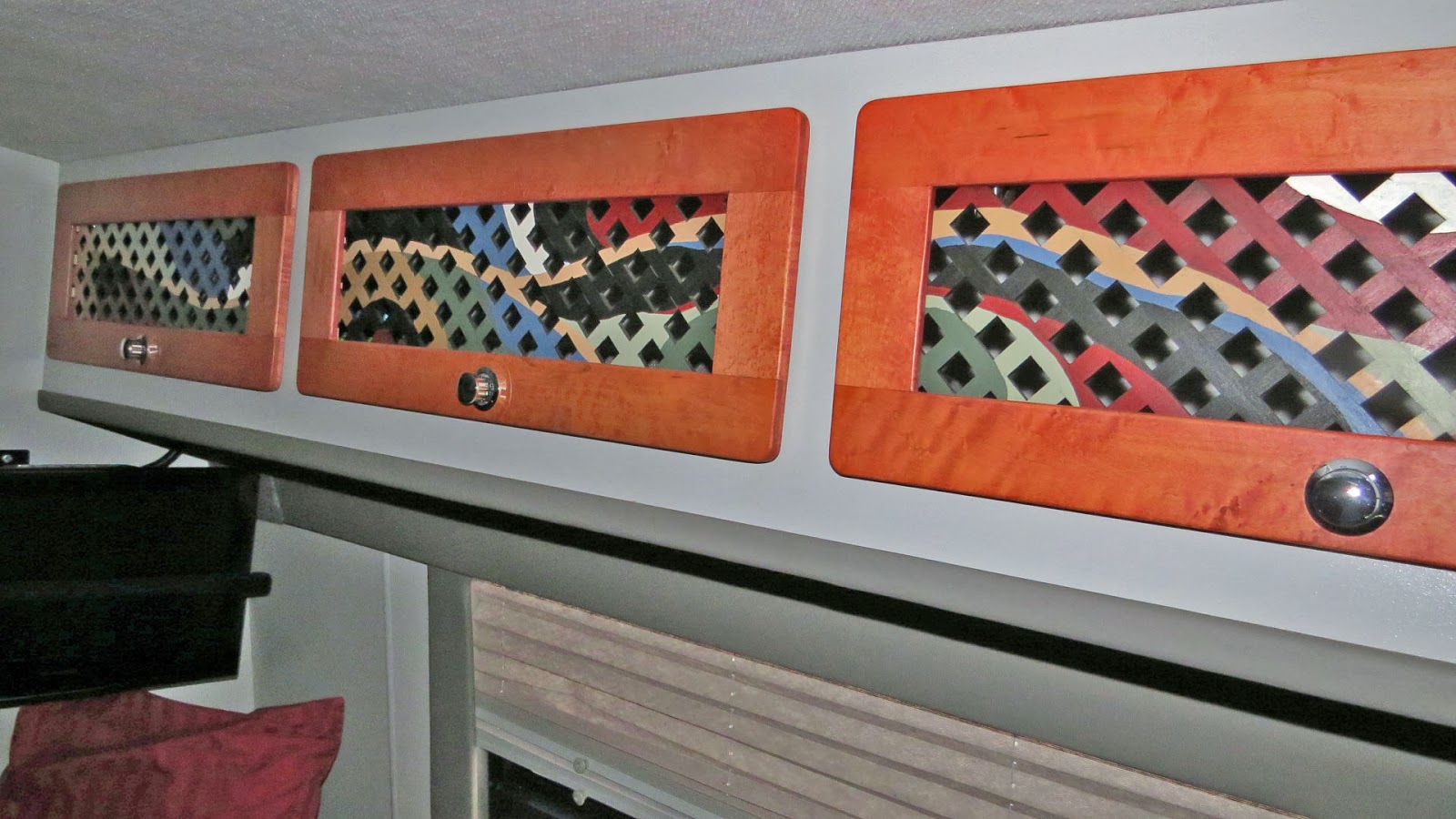 Behind the middle door I keep a yoga mat (Yes, I do use it for yoga but it also comes in very handy for those times I might need to climb under the van or otherwise get down on the ground but don’t want to get yucky.) some sheet music, a couple wood flutes and my electronic saxophone which plugs into that wonderful multi-tasker, my laptop.


Open the final door at the aft end and you can see the readouts for the solar charge controller, the E-meter (Which lets you monitor several things about the house batteries) and the control panel for the inverter. There’s also a 110 outlet inside here and I keep one of those outlet testers plugged in it so I can see at a glance that I have a good shore-power connection. (Did I mention that all my compartment doors have inset lattice panels that let the compartments breath, and as an added bonus, allow me to see indicator lamps without actually opening the door?) I also keep my cloth shopping bags here along with a small plastic tray that is my ‘dresser-top’ where I throw the stuff from my pockets like wallet, phone, keys and junk like that. While I’m traveling, receipts, which I’ll shred when I get home, and brochures and other paperwork I acquire along the way are tucked under this tray.
Between the gaucho and the overhead cabinet is a large, tinted window with two screened sections at the bottom. These are awning windows which hinge at the top and open out from the bottom so they can be left open in the rain. In addition to the day/night shade, I have customized a couple of insulated panels which fit between the shade and the window. When not in use, which is most the time, this extra insulation is folded up and stored above the driver’s compartment with the other window covers.
Posted by greg at 7:00 AM