Like virtually all RV’s there’s both a 110V as well as a 12V electrical system on board.

﻿
The 110V system is pretty straightforward. A 30A shore-power connection feeds an inverter/charger and a distribution panel which in turn feeds the air conditioner and a few outlets. One of these outlets supplies power to the microwave and refrigerator and there are a few others scattered in strategic locations.

﻿﻿
The inverter/charger lives under the couch and has a conveniently accessible remote panel inside one of the overhead cupboards. The whole thing is wired up in such a way that in invert mode it will supply 110V to everything, even if I’m not hooked up to shore power. Under normal conditions I leave the inverter/charger in the charge only mode but there are times I’ll switch it to invert mode. Running the micro for a few minutes is the most common reason I’ll do this but I’ve also been known to do it for heating water in my electric kettle if I don’t feel like dragging the stove out. These activities suck an alarming number of amps out of the batteries but only for a short while so don’t use up all that many amp hours. 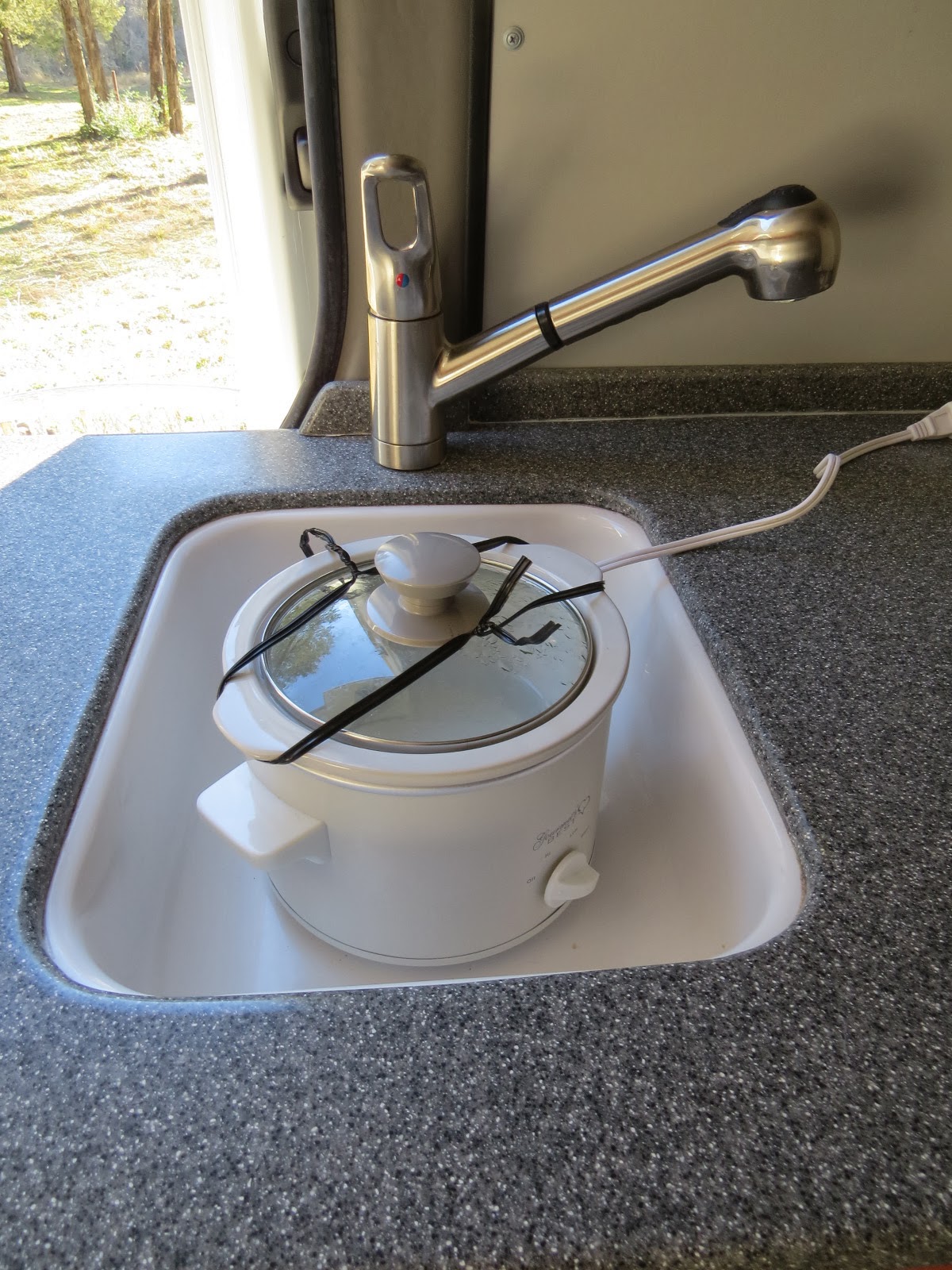 I’ll also use the inverter when on the road for running my 1.5 quart slow cooker which results in a really good dinner with little effort. (Unless I managed to screw up the recipe. . .) There is at least one 12V slow cooker out there and, by all accounts, as long as you make sure the plug stays firmly in the 12V outlet, works quite well, but I already had the 110V cooker so that’s what I use. It doesn’t use much power, but, of course, this thing runs for hours and hours at a time which is why I stick to using it when plugged into shore-power or when traveling. When the van’s engine is running the house batteries are being charged anyway so the extra drain from the cooker is more than made up for. When parked with shore power hooked up the cooker just sits on the counter, but, not being too keen on having that thing toss it's contents at the back of my head if I have to stop suddenly, when on the road I put it in the sink and tie the lid down with a couple of those long plastic-wire ties used on new garden hoses. One of these days I'll come across an old inner-tube of just the right cross-section and cut a 'rubber-band out of it but for now the ties work fine and I have a stash of them. The sink cover gets tucked under the pillow on the couch were it will stay put. When cooking on the road like that I turn off the 110V breaker supplying the refrigerator/microwave. This way the refrigerator runs directly off of 12 volts which is slightly more efficient than converting 12 volts to 110 then back to 12 again.


It starts with two 100ah deep-cycle batteries mounted under the gaucho in sealed boxes that vent through the side of the van. This gives me about 100ah worth of power before hitting the 50% discharge point that I try to limit myself to in order to improve battery longevity. The batteries can be charged back up by one of three different systems. The van engine’s charging system is robust enough to quickly pump a lot of amp-hours into both chassis and house batteries. When plugged into shore-power the inverter/charger also pumps out a lot of charging amps and will also keep  both the house and chassis battery topped up.

﻿﻿
But the key to keeping my little world luxuriously comfortable while camping off-grid, when the batteries are being asked to keep the fridge running, the lights burning, the cell phone and laptop charged and sometimes even the TV on, is the 180 watt solar panel mounted to the roof and the matching solar charge controller mounted in one of the overhead cupboards.


That panel is a little heavy up there on the roof but, other than hosing off collected grime once in a while, it's maintenance free, and even on the hottest of summer days, when the fridge is working its hardest, is enough to keep the batteries charged right up as long as I'm parked in the sun.


Of course the key to avoiding nasty surprises is regular monitoring of the batteries and for this I have an E-meter installed right beside the charge controller and remote inverter panel. With this handy little tool, which I’ve had in my last four rigs, I can see how much charge I have in the batteries, how many amps are going in or out of them and, when using more power from the batteries than I’m putting in, an estimated number of hours left until I hit the 50% discharged level. 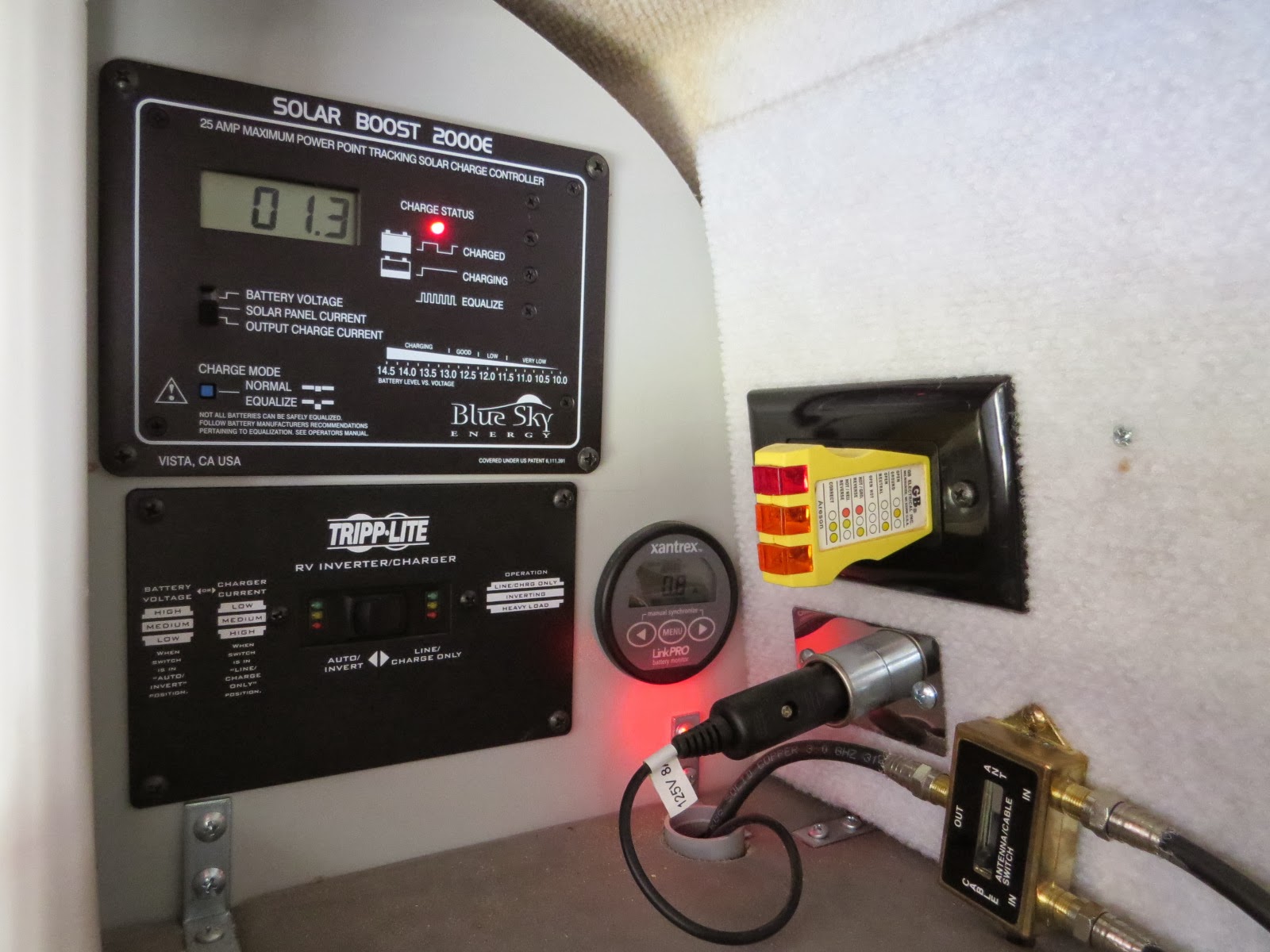 I had a generator in one of my earlier rigs and that might sound like a good idea, but in 5 years I put more hours on it running it every couple of weeks to make sure it would work if and when I needed it than I ever put on it for real. From what I hear this is the norm for many RV mounted generators.


Even though it was a good quality unit and quiet as far as generators go, it still made quite a bit of racket so I was reluctant to use it in a campground anyway. Also, the Sprinter uses diesel fuel and diesel generators are really expensive and heavy.


For those rare occasions when I need to break down and shove a little extra charge into the batteries out in the boonies somewhere, the Sprinter’s engine is more than up to the job, giving me 35 to 40 amps of charge current even at idle, and is quieter than most generators. The trick here is to not try and charge the batteries all the way up since they will take less and less charge current as they fill. Think of it like a funnel with an opening that gets smaller as the bottle fills. At first it fills pretty fast, but that slows to a smaller and smaller trickle as you go and filling up that last little bit takes forever. If you fire the engine up when the batteries are at about 50% discharge and only charge them up to about 70%, or about 40 amp-hours of charge, it's not what I would call fast, but doesn't take an excessive amount of time and, depending on the weather, (Remember that the fridge is the largest single user of battery power and the hotter it is the more it runs.) will get me through anywhere from 1 to 3 days even if there's no sun for the solar system.
Posted by greg at 7:30 AM