For the second year in a row one day of the annual two-day MS150 bicycle ride between Houston and Austin was canceled due to weather. Last year it was the Saturday that got canceled, in part because the fairgrounds used as an overnight stop flooded and the tents washed away. This time it was the Sunday that was canceled due to heavy storms over and around Austin that day.

Now I don't really care all that much one way or the other about the MS150. In fact the ride itself has become nothing more than a minor annoyance as 13,000 riders (They've had to cap the number of riders for many years now.) and somewhere in the neighborhood of 20,000 support and spectator vehicles clog things up and force the locals to stay sheltered behind locked doors as 20 and 30 mile sections of state roads are closed off by rent-a-cops from the cities that can't seem to grasp that we can't just move over one block and go around out here. The real annoyance for the past several years has been the month and a half of 'practice' rides leading up to the event. This is when groups of anywhere from 5 to several hundred riders get out on the even smaller county roads and act like they own the place, riding stubbornly five abreast down the center of lane-and-a-half roads, taking bio-breaks in people's driveways, leaving trails of trash and sometimes making it very difficult, and occasionally contentious, to get to your own house!

So no, the ride itself is no big deal, but those storms over in Austin that shut down the second day of the ride? Well they didn't stay over there. 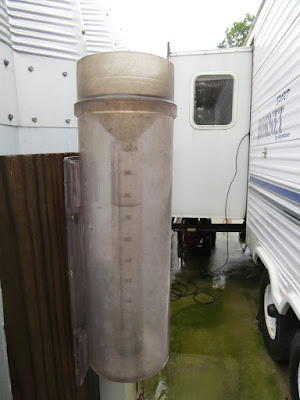 It started raining here, accompanied by thousands of lightning strikes, around 8 yesterday evening and as I type this it's still going. We have a big, as in BIG, rain-gauge. The central tube can handle 1 inch of rain before it overflows into the main tube. Last evening the gauge started out empty, this morning at around 7 I caught it just before the main tube overflowed. That's 13 inches of rain in 11 hours! Oh, and it's not done yet. I took this photo about an hour after emptying the gauge and it already had an additional .75 inches in it and the rain is scheduled to stick with us for another 18 or so hours. 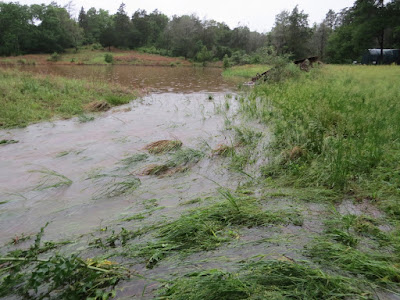 Back in April of 09 we got 12 inches of rain over a 24 hour period and it nearly trapped me because of all the low-water crossings we have around us (I had to get back to the city Monday morning for work.) but I don't think I've ever seen the pond's spillway as full as this before. 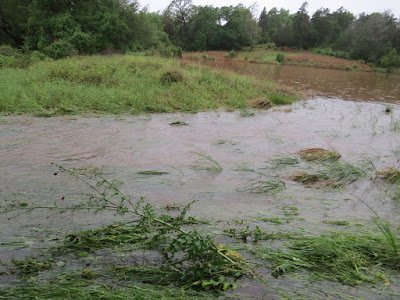 The water separating me from the rest of the dam is nearly two feet deep. More than enough to drown the side-by-side that I just used to ferry my mom across there, when it was completely dry, a couple days ago. 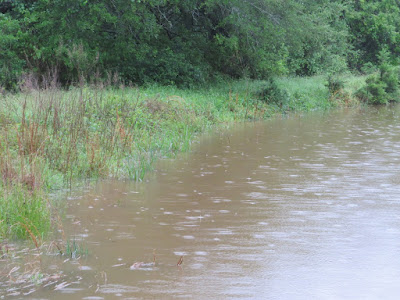 The spillway is keeping up, but there must be a lot of pressure on the dam! 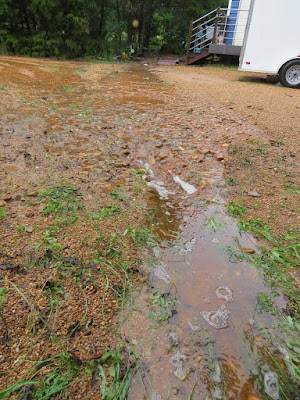 And this is NOT a creek, but rather it's our driveway!! Or at least it's supposed to be our driveway, much of which is now halfway down the hill to the pond.

I guess once the ground is dry enough I'll have to limber up the tractor and a shovel or two and put the driveway back where it belongs so we can get out of here. . . 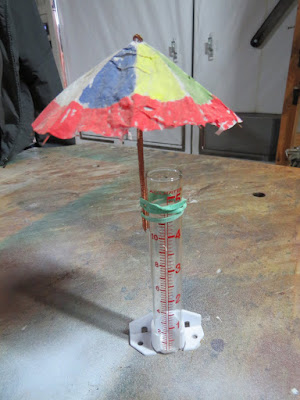 I think maybe it's time to break out the anti-rain gauge and put a stop to this!

But it's not all bad. The timing couldn't have been better. You see, yesterday I had to package up mom and ship her back home to my anxiously waiting sister (If you check mom out of the library and then break her you will have to face the wrath of my sister! She sees that mom is well taken care of but oh man! sisters can be scary!!)

The weather was reasonable and roads to Houston were exceptionally easy traveling yesterday as we made the two hour trip to the airport in more like an hour and three-quarters of easy, relaxed, driving. (Today the highway department was telling people to stay away from Houston because of "catastrophic flooding" and the airport was completely closed down by midnight last night.)

As a result I dropped mom off at curbside check-in earlier than anticipated then made my way over to the cell phone lot where I hung out for a couple hours until I saw on the status page that her flight was actually in the air (I just assumed she was on it. . .) before starting the long trek home. (It would have been a real bitch to just pull a U-turn and keep going once I dropped her off, only to get nearly home before being called back because something went wrong!!!)

Of course I had to do something moronic to mar an otherwise fine example of logistics and planning. And yes, I had to, it's part of the rule book; you will pay taxes, you will die, and you will pull stupid stunts, like leave my book at home. . . (Mind you, I've never actually seen this rule book for myself, but I've sure experienced it a time or two!) So for two hours (Thankfully the flight left on time!!) I listened to highway whine and jet roar while I twiddled my thumbs, read the owners manual (Now why do you suppose they installed the 'ambient lighting' controls over the driver's head if we don't have the ambient lighting package?!) and caught up with some blogs I follow.

Then, I guess just to keep the streak going, I chose to drive the expressway most the way home rather than take the collection of 12 different, and largely empty, back-roads I usually link together to avoid the expressway.

At the time it made sense. I was going to stop in a town with a Pizza Hut and bring dinner (Of sorts) home, but sitting out there in a solid line of 75MPH weapons of mass destruction, everyone of them jockeying and shoving as if they and only they could somehow break free of the crowd and do their normal 85MPH (This is Texas after all and I10 between Houston and San Antonio is a horrifically over-utilized corridor of commerce, recreation, my-dick's-bigger-than-yours racing and just general getting-from-here-to-there-idness.)

But I digress. Point is, this weather held off until I was home, maybe a little bruised and crowd-weary, but home, so it could have been worse. A LOT worse!