I've heard a rumor that the more gadgets you have in your kitchen the better cook you are. (OK, maybe I started that rumor, but we'd all like better eatin', wouldn't we? And wouldn't it be great if all we had to do to improve our chefdidness was buy more crap!!)

Anyway, around the house we cook 95% of our meat on the grill as well as roast vegies and toast bread. In order to carry on that tradition when I'm on the road I've been looking for a small portable propane grill that I can add to The Van. Something functional yet reasonably stow-able since - well - being the size of a standard American bathroom, The Van has a limited amount of stowage space. 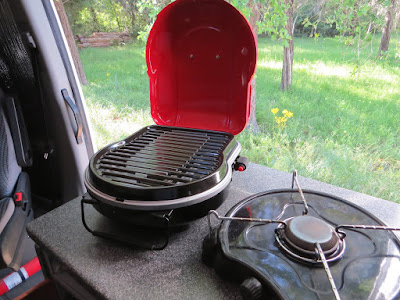 I'm a believer in good old-fashioned, nearly indestructible cast iron, but I finally had to admit the venerable material doesn't seem to have very many advocates anymore, certainly not enough to set the manufactures of things like this all a-twitter, and after a few years of optimistic (OK, maybe stubborn.) searching, I finally gave up and settled for something with an enameled steel grill instead, probably my least favorite grill material but at least it came in a package that seems like it will work. (I'll hold off on any sort of review until I've given the new grill a sufficient workout.)

Combined with my stove and cast iron dutch oven (The real kind, designed to work with coals as well as on the stove-top, with lipped lid and legs .) I think I have most of the grilling/heating/baking bases covered now. 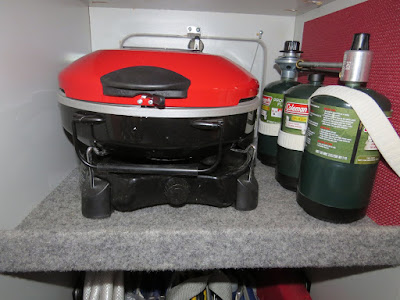 There is plenty of height in the cupboard where the stove and it's fuel live so I suppose I could have saved myself a little work and just set the new grill on top of the stove. They actually nested together pretty well as long as the grill was on top. (The other way around the the stack was pretty unstable.)

But I'm basically a pretty lazy person and regularly unstacking and stacking items used frequently is not my definition of fun, or even acceptable.

So naturally there was a project there.


So there it is, both the grill and the stove have their own dedicated space and I don't have to do any stacking or unstacking in order to create my culinary masterpieces. (OK, you can stop laughing now. It's just that I've also heard a rumor that positive thinking creates positive results and I need all the help I can get en la cocina!!)