Tales from the Road: First Wheels 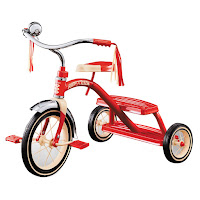 I suspect most everybody remembers their first set of wheels.

It was around 1971 that my parents bought me mine.

No! Not that kind of wheels! I'm talking about an old red VW Bug with real working (mostly) engine. You know, Wheels. . .

But, to be honest, I'm not sure why they did it.

I was not only somewhere in that horrible space between 16 and 17 years old, which I think we can all agree is a pretty ugly age for just about anyone to be, but I was also the quintessential firstborn; pure hell on parents that didn't know what to do with a teenager who was convinced he was all grown up and rebelled seriously at any attempt to treat him otherwise. (Still do, some would say. . .)

I did have to pay my own insurance though. That wasn't part of the original plan, but then, a few weeks before actually owning my own car, I had to go and crack the fiberglass fender of Dad's dune-buggy, the one he was in the process of selling to make room for my car, while showing it off to some of my out-of-town cousins by bouncing around an old abandoned farm a few miles down the road.

I had no part in the selection of, nor negotiations for, my first car, Dad took care of all that, but then what did I care, I was getting a car!! The transaction was a family affair, the car belonging to one of my uncles before it became mine. Technically the half brother of my Mom's sister's husband, but any family would be proud to claim my Uncle Vick!

Though of average height, Uncle Vick is and always has been a big, barrel-chested guy with matching oversized personality and I don't think I have ever seen him without a grin on his face. He can always be counted on to jolly up an event, and transferring his car to my ownership was no exception, though I'm not sure that was his intention. 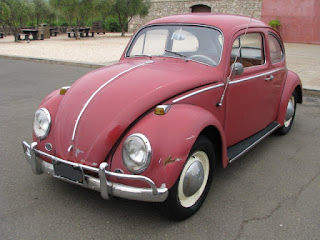 You see it was summer; in typical mid-western speak, landscaping season; and I'm talking obsession here. (Any respectable Midwestern yard is fertilized, watered, herbicided, insecticided, mowed, weeded, manicured and trimmed to within an inch of it's life!) So it wasn't unusual that a day or two before actually transferring ownership, my Uncle Vick decided he needed some new sod to repair a spot in his yard.

Now any boring, unimaginative uncle would have borrowed a truck, or at least a small trailer, to fetch his sod from the garden store, but not my uncle.

No, he rolled up in his (My) VW Bug after work that day and proceeded to load it up with all the sod it could carry. There were rolls of sod under the hood, which wouldn't quite close so it was tied down with some twine, on the floor, stacked to the roof in the back seat, tossed up on the deck behind the back seat and piled chin high on the passenger seat.

This was not Uncle Vick's first rodeo and he had come prepared with plastic that he laid down under (most of) the sod, but I don't think he thought the thing all the way through. You see, as he was lumbering heavily, wheels splayed in typical overloaded Bug fashion, down the road with his horticultural load, he was  a little warm. After all, it's hard work heaving rolls of sod into the back seat of a Bug! Well of course the Bug had that high-tech 2-40 air-conditioning (2 windows - 40 miles an hour.) so naturally he rolled the driver's window down. . .

When I got my hands on that car there was dirt everywhere! In all the little nooks and crannies, inside the gauges, embedded in the seats, grinding merrily away inside the window mechanisms, gumming up the door locks, everywhere! I'm not sure how he managed to keep from crashing that day, enveloped there inside his own personal dust-storm, but he managed, and I swept and brushed and vacuumed and wiped, and all was good with the world because I had my very own wheels!

Like my uncle, that car had it's quirks. Typical of Bugs of the day it had very little in the way of heat, (Notable when driving to school before sunrise during a Michigan winter!), if the dash light dimmer wasn't turned up to full bright the tail lights wouldn't work, all winter long she had to be parked at a funny angle to the garage so as to be out of the way of the other vehicles but also within range of plugging in the dipstick heater I had to probe her with every night if I was going to have any chance at all of getting her started in the morning.

Oh! and she had no gas gauge! By design!

Instead there was a lever poking through between the driver's and passenger's feet. The trick was to make frequent fuel stops and keep the handle of that lever pointing straight up at all times. That way, if you did run out of gas you could reach down there and twist the lever until it was pointing down. That would close one valve and open another that allowed the engine to suck fuel from the emergency reserve until you got to the next gas station.

I suppose if one were practiced at it you could shove the clutch in as the engine sputtered, reach down there, careful not to impale yourself on the shifter or run off the road while you were contorting, squeeze the safety latch, twist the lever to the down position, sit back up, pop the clutch and continue on your merry way with barely a hiccup.

I wasn't practiced at it because apparently I was pretty good, not perfect as we're all about to find out, but pretty good, at estimating when to make timely fuel stops. So the one and only time I ever ran the Bug out of gas I eased to a stop on the shoulder, (Easy since there was no pesky power steering or brakes to worry about when the engine quit.) opened my door so I could shift my butt halfway out as I bent down to reach the lever, and promptly snapped it clean off. . .

With typical teenage luck, this happened on the one and only occasion I had a car full of classmates! We had just left the school, which in those days was only a couple years old and still out in the sticks, so I had the humiliating honor of watching my classmates bail out, flag down other classmates with functioning cars, which they then scrambled into and quickly left me sitting there alone, hoping that at least one of them would send help. (No cell phones and nothing but farmland around.)

Help did eventually come in the form of a full gas can, but to no avail. You see, I had managed to get a quarter turn out of that lever before it snapped, which is exactly the right amount to close the normal valve before starting to open the emergency reserve valve. After an embarrassing tow at the end of a frayed rope I had to put the Bug on ramps, crawl under and take a hammer and screwdriver to the rusted linkage to get at least one of the valves to open up. 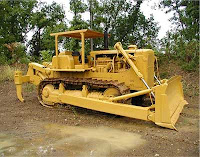 As it turns out, I only had that first, quirky, can't-miss-me-construction-equipment-yellow car for about a year and a half. (Before I even got to drive the little red Bug even once my Dad took it into work and had the guys in the shop paint it with the same thick, bright yellow paint they used on their bulldozers. Dad always did like a fresh paint job - I'm sure Mom felt better with her eldest baby driving a high-vis car - and I didn't care, I had a car!!)  As the rest of my classmates prepared for prom like normal teenagers, I was off to basic training (I graduated a semester early.) with plans to marry my girlfriend in the gap between basic, and my next posting, and while I was away getting pounded and run and stomped into a soldier it was determined by those not in the middle of a 10 week hell that the Bug was not appropriate transportation for a married couple, so when I got home there was a big ass midnight blue Pontiac 4-door with automatic transmission, (As far as I know my then-girlfriend, now ex-wife still can't drive a stick.) honest-to-God heater, and big monster of a trunk in the back where it belonged, sitting there in it's place.

But I still fondly remember my first wheels.

(There's a story or two behind that Pontiac too, but that's for another time, maybe.)