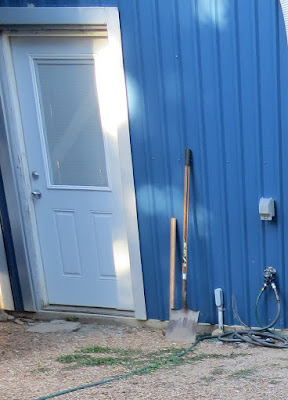 The barn went up around 2005 and we, my wife and I, have been living here on the property full time since 2010. In all that time there has been nothing outside the front door of the barn, the door used whenever the main doors are closed, except loose gravel and a few dollops of leftover mortar that added up to about a platter sized pad.

Now you have to understand that one of us in this household is upright-challenged. And I mean seriously challenged. (One day this person was just standing there at the washing machine and suddenly, for no reason either one of us can figure out, fell flat on their back, dragging half the crap on the nearby shelves down with them!) I won't say which one of us it is, but she once fell off a curb in the city and spent the next two months in a wheelchair as her busted ankle 'healed'. (I put healed into quotes because it has never been the same since.) Another time she was walking across the meadow near the pond and stepped in a 'hole' so badly that it took two surgeries and a bunch of titanium to put her leg back together. (We went back later and never could find the infamous hole she stepped in. . . We also had quite a knock-down-drag-out that time with the nurse who insisted, despite the fact that we own a wheelchair (Yep, that's how bad it is.) and had it right there at bedside, that, she was not going to be allowed to leave the hospital until the nurse saw her take a couple steps on crutches. I mean we're talking about someone that goes ass over teakettle, followed by an incapacitating meltdown, at the mere sight of crutches propped in the corner!!)

So you can imagine the sort of obstacle that step from doorway to uneven gravel poses, especially when she has to negotiate it multiple times a day and often in the dark. But despite all her hints and requests, I sat around on my butt and did nothing about it until threatened blessed with an impending visit from my octogenarian mom, who is also upright challenged. (Though only slightly and she does have the excuse of age.) All the sudden addressing the issue became a priority.

Certainly not an earth-shattering, or even slightly sexy, project, but one that will improve the quality of life around here and was shamefully overdue.