A little more than a hundred years ago cars started showing up in driveways and the Great American Road Trip was born.

A little more than fifty years ago the interstate highway system started making its appearance, and soon
changed the road trip forever.

Now don't get me wrong, I'm not suggesting that the change is all bad.


In fact in my book - OK, OK, not to imply that I’ve actually written a book, I mean in my opinion - nothing beats the super-slabs  for getting from one place to another, especially when the other is a long ways away and you're on a schedule. 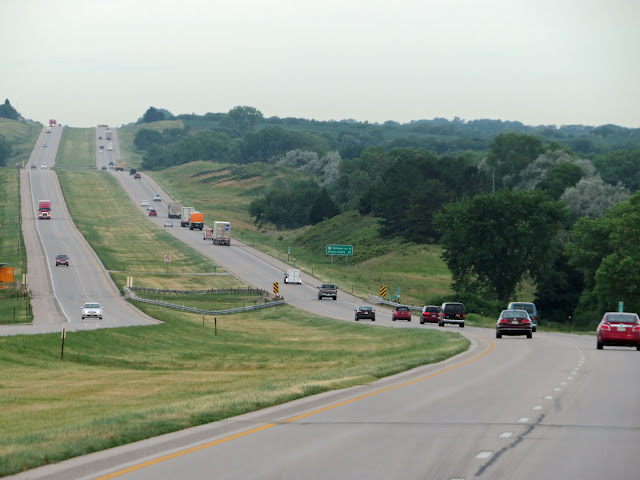 On the super-slab I can point my nose, (Hopefully in the right direction!) set the cruise somewhere between 62 and 65, where most the traffic is either going my speed or faster which means I rarely have to deal with the hassles of passing, and can just sit back and drive, rolling up the uninterrupted miles at the consistent rate of one a minute.

Once in a while that uninterrupted, high speed consistency makes the super-slab a good escape route too, as was the case recently.

The weather on my latest trip had been a tad warm but otherwise undeservedly good, but one morning I woke before dawn on the northern edge of Salina Kansas and the wind was – well let’s just say it was lively, and the blinding flicker and flair of lightning to the northwest was nearly constant, as was the punishing assault of closing thunder.  While the wind tried its damnedest to rock me back to sleep, though hardly with a mother's gentle touch, a quick check of the Weatherbug app on my phone showed a strong storm cell just to the northwest that was making a beeline for Salina, and there I was, that little blue dot right there in between.

A few minutes later (All I have to do is stow the  window covers and turn the key then I’m off.) I was on I135 heading south at 65 mph and soon driving out from under the leading edge of the storm which then slid safely off to the southeast.

But the super-slab's attributes are also their major flaw.

Because of their focus on getting from here to there, the super-slabs are not only efficient, but also a great way to disconnect from the land, to lose the link to places and people.

They flatten this country, literally as well as figuratively.

On the literal side they use deep cuts, wide curves and tall bridges in an attempt to smooth the land into one long flat ribbon; sanitized, homogenized strips 150 to 300 feet wide.

On the figurative side they flatten the land into one destination after another. They whisk us in hermetically sealed, seat-belted, air-bagged, surround-sounded, climate-controlled isolation from one anonymous gas station to the next, from one franchised town to another.

And in the process we miss the richness of in-between. And worse, over time we even forget the in-between exists.


"The man on foot, on horseback or on a bicycle will see more,
feel more, enjoy more in one mile than the motorized tourists
can see in a hundred miles." Edward Abbey

(Abbey also wrote "Society is like a stew. If you don’t stir it up
every once in a while then a layer of scum floats to the top."
which has absolutely no bearing on this post but,
given the times and its truth, I couldn't resist throwing it in. . .)


But rediscovering that missing in-between is not just a simple matter of taking to the back roads because the interstates, along with work, responsibilities and commitments, have all trained us to focus on the destination. To watch the clock. To meet a schedule. To filter the extraneous. To live a homogenized life.

Now I'm not suggesting Abbey's route of forgoing motorized transportation altogether, that's just not practical for anything more than a day's relaxation, but unless we can leave all that homogenization training behind when we whip down the off-ramp, back roads are nothing more than a slower, more frustrating way to get from here to there.

But I find that with the proper attitude, the proper mindset, back roads can be a pathway back to the richness of the land, to rediscovering the deep satisfaction of an intimate connection with place, and through place, with people.

The back roads may be physically narrower than the super-slabs, but with the proper mindset the swath they cut is so much wider.


It's not about driving through, but about being in the place. About noticing the little things that add up to the stories that make a place a place, that give it color, that provide a glimpse into it's life. And for that to happen I have to set aside the destination, and the clock, and focus on the here and now.

I have to be in the backroad mindset.


Once I'm there, once I've switched mindsets, I can experience the land rather than just watch it go by, and, even though I sometimes forget it when I haven't been out there in a while,  that's a place I like to be!

Sure, in most cases when I’m on a back road I am going somewhere, but getting there is not the point, it’s all about the going. (If that sounds very close to something you've heard before you’re probably right. The writer is Harry Chapin, the song is Greyhound, released around 1972, and the line is It’s got to be the going, not the getting there that’s good.)

With the proper mindset, the back roads are willing to reveal some of the countless, intimate stories they’ve been witness to.

Granted, I may not get all the details right, but nobody’s there to call me out on it, and I’ll bet I’m not that far off!

And there’s more concrete history out there along the back roads too. (Oops, sorry, pun not intended; really!)

It’s there in the old barn, the one with the badly sagging roof hidden behind the tree on the right, sitting next to a new(er) and bigger, steel barn.

They struggled for years to make do with the limited space in the increasingly leaky old barn, spending many evenings at the dining table huddled over the farm accounts, carefully balancing growth and need against cost, before finally reaching the tipping point and going to the bank, not sure if they were happy or secretly terrified when the loan officer agreed with their assessment. 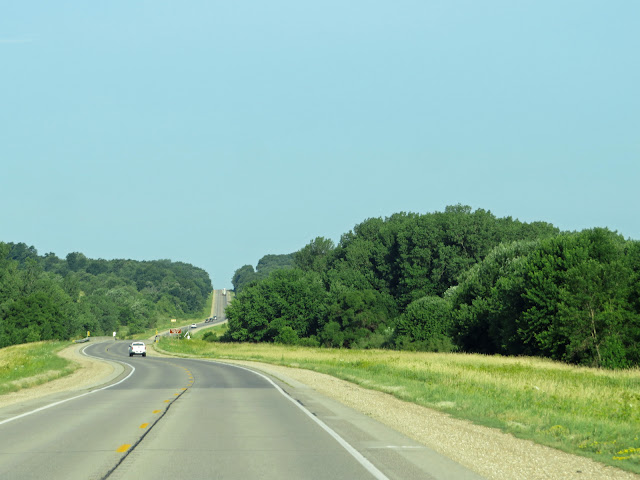 It’s in the road’s wobble down there in the creek-bottom. The wobble that tells of years of maintaining the original bridge, the last few of those a losing struggle as the narrow deck and the pilings holding it up decayed badly under the pounding of heavier and heavier loads, before the funds were finally appropriated to replace it with a new bridge, with the admonishment that the road remain open during construction. 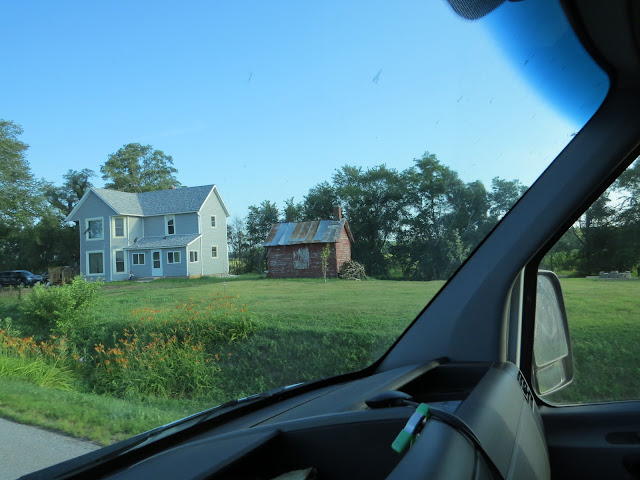 It’s in the mostly abandoned shed beside the main house, its boarded over window and  brick chimney proclaiming that in its day, a day a long time ago, it was the main house.

With the right mindset traveling back roads is never boring, and the slower progress only adds to the experience by giving me time to absorb the feel of places.

With the proper mindset, having a back road lead me right through the heart of town isn’t a frustrating inconvenience, but rather an opportunity to sample the flavor of the place.


To see whether it’s focus is the daily business of  offices, things to be bought, and parks to gather in,


Whether it's about tradition and preservation

Granted, on the back roads the speed limits are slower, the trip is going to take longer, and there will be a town every couple dozen miles to slow me down even more. Between towns I'm probably going to get hung up behind a slow moving tractor, or the only slightly faster farm pickup. There will be stop signs, tight turns and steep grades to be negotiated.

But without the proper mindset, I might as well not even bother because I'd just end up missing the breadth and depth of the opportunity.