Bed-Mod; And it's About Time!!

Over the past 11 years I've had two different Sportsmobiles. 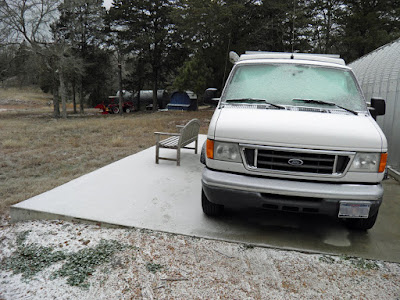 The first was this rather chilly looking Ford E350 Poptop version I bought around 2005. (And yes, we can get ice-storms drizzles around here! OK, maybe only once every 5 years or so, but we still get them.) 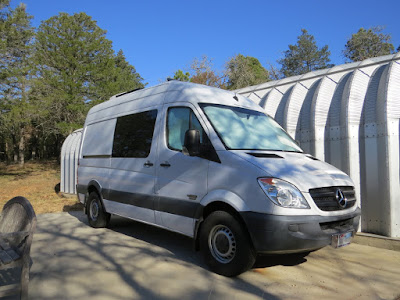 The second, and current, is this Mercedes Sprinter conversion I bought in 2011 because retirement was about a year away and I wanted to embark on that endeavor with a fresh set of wheels. (The Ford had just shy of 100K miles on it when I sold it.)

Though the outsides are distinctly different the interior layout of both was virtually identical. (The improved handling of Sprinter compared to the Ford more than made up for the higher center of gravity, besides, standing headroom + overhead storage is really nice!! 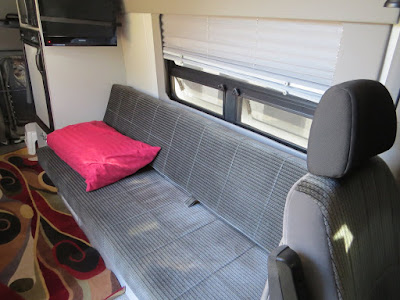 Which means that in both there is this gaucho down the left side, that also serves as my bed.

The gaucho is designed to pull out so the back-cushion drops down and the whole thing makes a (really snug!) bed for two. 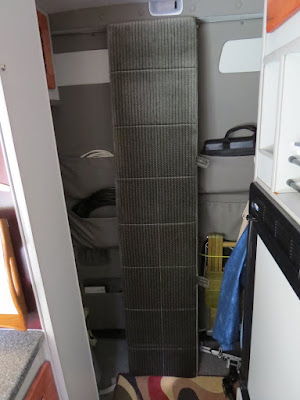 So for years, as in a decade + 1 worth of years in two different vans, every night I would wrestle the big, awkward, and heavy back-cushion off the gaucho, stand it up vertically, and duck-walk it to the back of the van where it was slightly less, but only slightly less, in the way 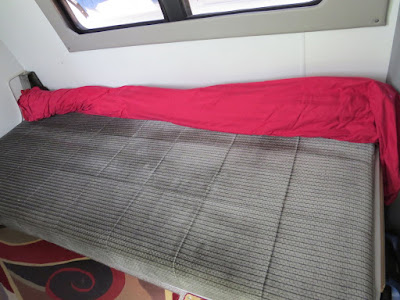 so I could get at the bedding, which is rolled up behind the cushion 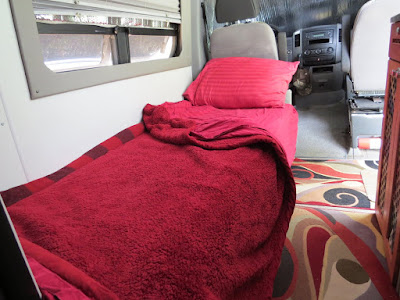 and unroll it to 'make' my bed for the night. 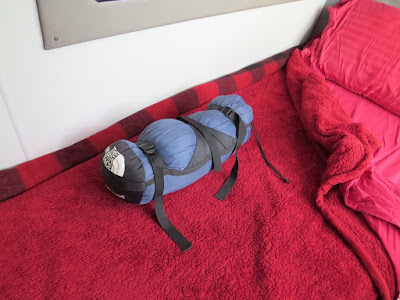 I have a bottom and top sheet plus a blanket all rolled up as a unit that, with a couple swipes of my hands, can be spread out and ready for my weary ass in seconds.

I also keep a wool blanket, as in genuine, heavy, warm-even-when-wet, dense-enough-to-block-wind, wool blanket, rolled up separately for those chillier nights.

This way the only 'bedding' I have to worry about storing somewhere during the day is the pillow and the sleeping bag that I break out on those really, really chilly nights.

In the morning I reverse the process by rolling up the bedding, hugging the back-cushion to my chest and dragging/duck-walking it back up the aisle before wrestling it back down into position.

Almost since day one I've realized that for the vast majority of time that back-cushion was doing virtually nothing but concealing my rolled bedding, (And getting in the way of post-lunch power naps since, with it on there, the exposed part of bottom cushion is really not wide enough to comfortably lay down on. I know, I've tried many times!) but I didn't do anything about it until recently

when I sealed the cushion up in heavy plastic and relegated it to a lumber-rack in the back corner of the barn. (Just like with the TV and Micro I removed, I'll hang onto it in case I pass the van onto someone else one day.) 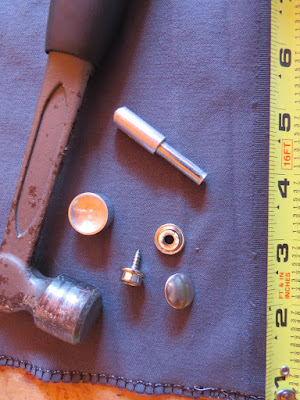 Of course if that's all I did then my rolled up bedding would be exposed during the day, so I drug out a remnant of the fabric I used for the window-covers and the stealth-curtain that I hang between the cockpit and the cabin when I don't want to be obvious and use the window-covers, such as when overnighting in truck-stops and other parking lots.

The project was ridiculously simple from that point on. (I had to do some serious hunting to find where I'd stored the left-over fabric and that was probably the hardest part of the project!!)

After running a cast-over stitch down the edges to keep them from fraying, (Just visible at the bottom of the photo) I installed 4 snaps (The cap or female half) evenly spaced along one edge of the fabric, 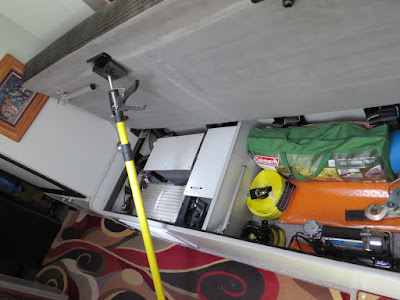 then propped up the gaucho's really heavy bottom cushion so I could screw the male half of the snaps along the back (bottom) edge of it.

With the fabric draped over the cushion I pulled it down the back and snapped it in place. Now the only time it will move is when I want it to move. 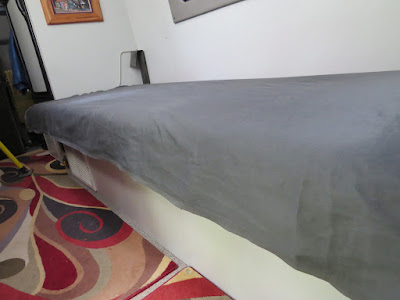 When spread over the cushion with the bedding put in place on top of it, the fabric acts something like a mattress protector 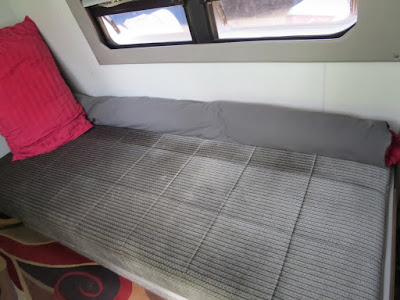 but in the morning when I roll the bedding up into day-time mode, the fabric rolls up with it and protects the bedding from dust and other grunge just like the unwieldy back-cushion used to do.

The one thing missing from this ingenious solution (OK, OK, so ingenious might be a little strong to describe this Well Duhhh! project.) is that sometimes, like maybe whne grabbing a leisurely lunch while on the road or when stealth-camping and I can't spin the passenger seat around on its swivel mount to turn it into my BacaLounger, I do actually sit on the gaucho. 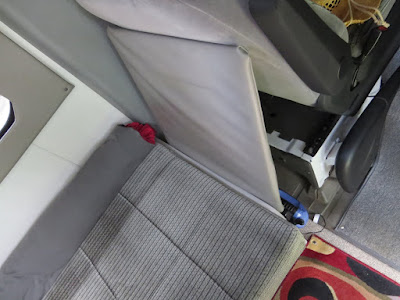 But without the back cushion there, even when using my pillow in its place, the bottom cushion is just too wide for  comfortable sitting.

But the fix is simple! I have a 'headboard' that fits into a channel on the head of the gaucho and rests against the back of the driver's seat (Which is slid all the way forward) to keep my pillow from sliding out from under my tender little head and into the abyss below when sleeping. 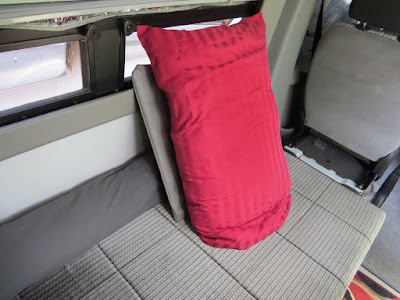 Turns out that propping that headboard on the gaucho cushion and leaning the pillow against it creates just as functional and comfortable a seat as the back-cushion used to.

Now I'm no longer wrestling with that back-cushion twice a day, (It was a little like dancing with a very reluctant cousin. Don't ask how I know that!!) cussing it when trying to take a quick nap or tripping over it when trying to get something from the back of The Van.

Not having it's bulk lurking there also has the added benefit of making the interior feel a little more open.

Now what am I going to do about that crappy window valence I've been staring at for years?!!!!