I like being able to quantify my world with hard facts, and that includes temperatures, both inside and out.

I mean come-on! If I don't know what the temperature is inside The Van how do I know if I'm really hot or just trying to feel sorry for myself? And without a thermometer outside for verification, my heroic stories of surviving witch's-tit weather could be called into question!

Over the years I've tried many indoor/outdoor thermometer options, but regardless of brand or price, I seem to keep running into the same problems.

First, the inside portion of indoor/outdoor thermometers typically package the readout and the indoor sensor in the same housing. But what if I don't want to sample the indoor temperature from the same place I read it?? With our steel building, in order to receive the signal from the wireless outdoor sensor hanging from a nearby tree, the indoor unit must be placed near the oversize glass door, right on an outside wall that receives direct late-afternoon sun. Yeah, right, it doesn't work all that great.

Second I'm constantly finding that the inside unit has lost communications with the outside unit which requires a reset, often of both units, and usually at the worst possible time. 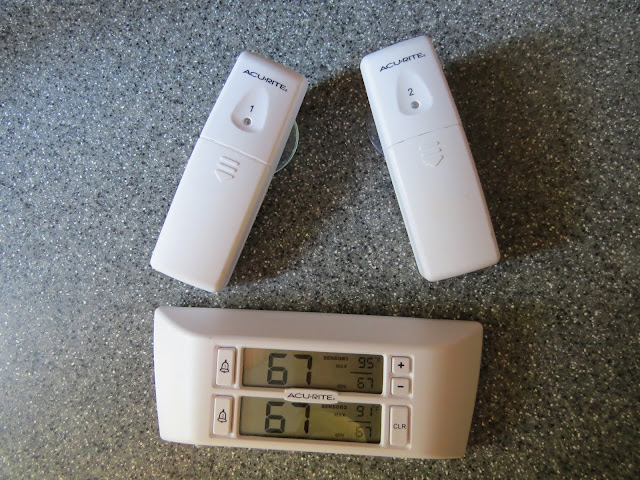 Well along the way I bought one of these AcuRite Fridge/Freezer wireless thermometers so I could see with a passing glance what the fridge/freezer in The Van was up to, or should I say down to?

It has three parts:


Sensors1 and 2 that go into the fridge and freezer respectively

As you can see in the photo above, the readout includes a separate min/max function that can be reset with a push of the CLR button. In addition separate alarm points can be set up for both the fridge (sensor 1) and the freezer (sensor 2). The limitation here is that you have to be within earshot of the unit to receive an alarm since, for $25 and no monthly service charge, you're not getting an internet-connected device that will talk to your phone. 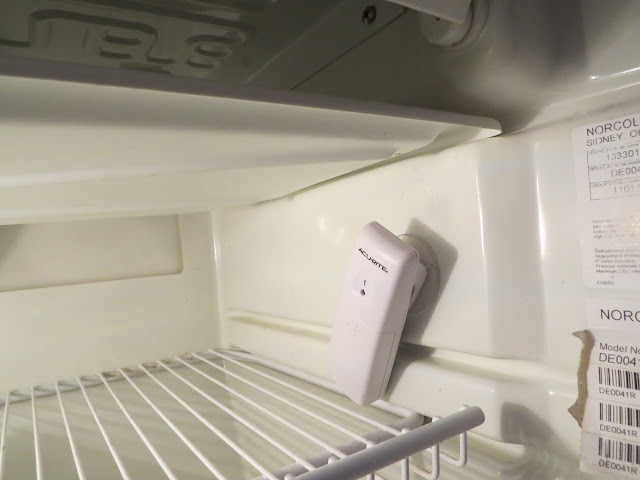 The sensors come with both a shirt-pocket type clip for hanging on the wire shelving or a suction-cup for sticking it to the side of the box. I stick mine in with the suction cups and have never had them come loose on their own. 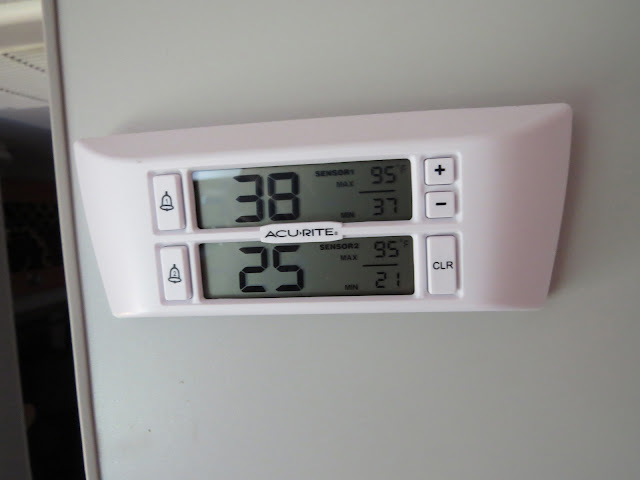 The receiver section has magnets on the back for hanging right on the fridge door, but since the front of my fridge is not metal I used some of that Combat brand hook & loop stuff to just stick the readout to a wall nearby.

I've been using this thing for about two years now and have never, as in not ever, had either of the sensors quit talking to the receiver, or even ask for new batteries. It just chugs along quietly there in the background, never giving me any crap, always doing what I ask of it.

That impressed me enough that I turned around and bought one more of these for the fridge/freezer in the barn. Because the sustained freezer temperatures of that one are so low (-5F) I did install lithium ion AA batteries in sensor 2 since other types of batteries just can't handle the sustained low temps reliably. Pricey but so far (18 months and counting) I haven't had to replace any batteries at all. (As I stand here typing this the expensive Oregon brand indoor/outdoor thermometer hanging near my computer station is, once again, asking for fresh batteries.)

Then the indoor/outdoor thermometer I was using for monitoring the standalone freezer, also out there in the barn, threw a hissy-fit one too many times and I bought yet another of these AcuRite sets.

I wasn't sure this was going to work out because there is no way to select the frequency used to communicate between the sensors and receiver, and with the fridge and standalone freezer side by side out there in the barn I figured two receivers and four sensors might get themselves all confused.

Well they did. When I put the batteries into the new receiver it picked up the sensors in the fridge and ignored it's own sensors. But then I noticed that the original receiver had no such confusion issues. It continued to display the temps of it's own sensors and ignored the new sensors.

So, on a hunch, I took the new unit, receiver and sensors alike, out into the field, out of range of the existing unit (up to 70 feet according to the paperwork) and re-installed the batteries. Now the new receiver was picking up it's own sensors and when I walked everything back into the barn there was no longer any confusion between the two separate setups, even though they are literally within a few feet of each other.

Apparently the receivers lock on to the sensors and, as long as you don't remove the batteries and start over, they never seem to loose that lock.


Since there's no fridge in the standalone freezer, I just tossed it's sensor 1 onto a nearby shelf and this got me thinking that maybe one more of these units could be the solution to my indoor/outdoor woes in The Van. 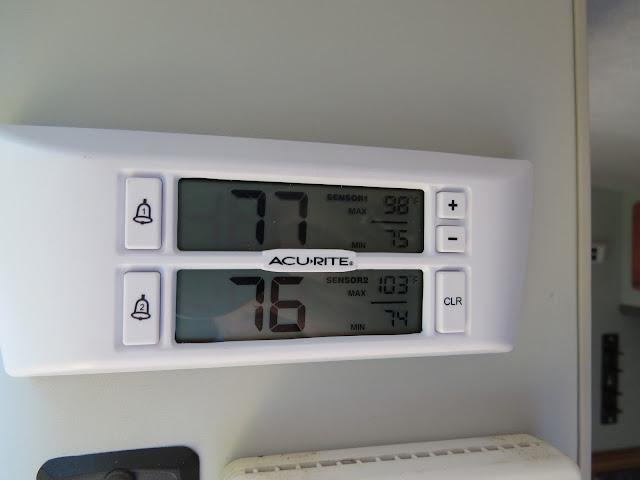 So, once again I bought another one of these AcuRite sets and installed it in The Van as in indoor/outdoor thermometer.

I currently have sensor 1 of this latest addition, the sensor I use for the indoor temp, tucked safely into the one and only drawer in The Van, but if I think my toes are cold one winter evening I can always toss it onto the floor beside them to check.

As for sensor 2, the one I'm using as the outdoor part of indoor/outdoor, That was a little more problematic.

In the past I've tried mounting the outside sensor somewhere under The Van where it's shaded but as far from drive-train heat-sources as I can get it, but I've often had communication problems with these because of all the steel between the sensor and the receiver, besides, I'm pretty sure this new sensor, designed to go into the freezer, is not weatherized enough to survive there under The Van when driving through a rainstorm. But I know from experience that though hanging a sensor in the relatively spacious and protected engine compartment works as far as maintaining communications and keeping it sheltered from weather, it may take as much as 12 hours for that huge chunk of of metal sharing the same compartment to cool down enough  to start returning accurate readings. 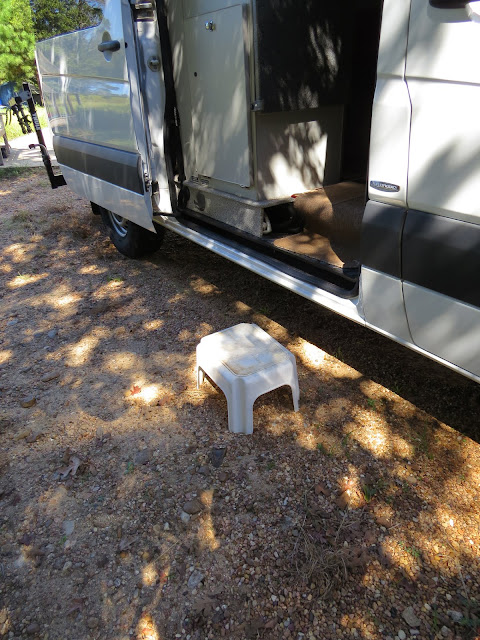 Then I started casting a speculative eye on the little plastic step I carry in The Van. When deployed it's outside and away from any residual heat created by the drive-train, and the step provides a bit of shelter as well as shade!! 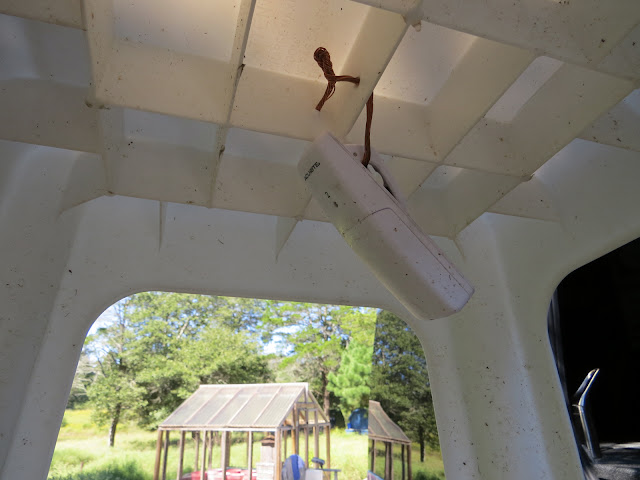 So I grabbed the unsuspecting step, rudely drilled a few holes in it's bottom side for a hard-wearing copper-wire loop, and hung sensor 2 from the loop via its shirt-clip. It's not perfect, Any sun on the step gives me readings about 10 degrees over true ambient, but it's a lot better than waiting 12 hours or so for the engine compartment to cool down.

So far, even though it wasn't really designed for this, the AcuRite has been functioning very well as The Van's indoor/outdoor thermometer.

So lets see now; I have three more of those troublesome indoor/outdoor thermometers, one in the travel trailer, one at my computer station, and the one in the living quarters.

Oh hell! At this rate I should probably just buy stock in AcuRite!!