Running #420, the Upbound Freight, on the Daylight Pass Railroad

The first couple miles east out of Cutoff are a continuation of the same gently winding grade encountered below Cutoff, but then the track starts to steepen, eventually reaching a stiff 2.65%, then soon arcs into the left-hand turn that marks the beginning of the giant S curve that claws its way up the west approach to Daylight Pass.

Leaving the jenny behind in Cutoff has lightened the train a little, but with three loaded cars it still weighs in at just about 284 tons which drags their speed down to around 13 MPH on the steep grade, which means covering this 18 mile segment of track, the longest single segment on the railroad, will take well over an hour. It doesn’t help matters at all that they have to slow when crossing trestle 39.6 which is so close to the steep part of the grade they have little time to build any speed back up after crossing the weakening bridge, but that’s railroading. 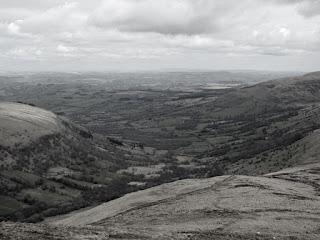 The western approach to the pass is not particularly rugged, just steep. And while the scenery in the confines of Wild Woman Canyon is spectacular, the view from the West Pass Grade is far-reaching.

The altitude has caused the trees to dwindle into a few scarce and scraggly specimens as the tracks work their way up into the clear, and increasingly cold, air. Up here the ground is covered with low brush and short, twisted trees, but unlike down in the basin with its sparse and thorny gray-greens, here the alpine flora is a undulating blanket of greens; dusty greens, deep greens, bright greens, the whole spectrum. 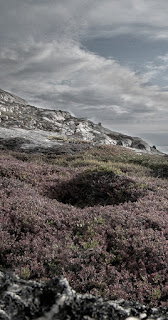 Tiny, ground-hugging flowers sometimes cover the greens creating little clouds of purple and dusky yellow. And this time of year the train is rolling through russet patches as the greens of the leaves give seasonal way to the colder nights, showing yellows and reds instead.

The laboring train passes MP 54 with no sight of the track-gang that is supposed to be clearing brush on the downhill side so there will be somewhere to dump snow clear of the tracks this winter. What the sharp eyes of both Tom and Jake do see is the telltale ash and remaining spike of a burned out fusee right at the point where the track-gang obviously stopped cutting brush.

Since the fusee is already burned out the track-gang, who have apparently set their speeder back on the track and bugged out, is more than 10 minutes ahead of them so Tom keeps the train running as fast as the little engine will allow*, but it is strange that the crew has knocked off and headed back to Downhill so early.

*If the fusee had still been burning Tom would have been required to stop. If he could stop before running over the burning fusee he could proceed as soon as the fusee burned out. If he ran over the burning fusee before he could get stopped he would have to wait a full 10 minutes before proceeding. In either case, he would then be operating under the restricted speed rule which means he has to be able to stop in half the distance he can see down the tracks. 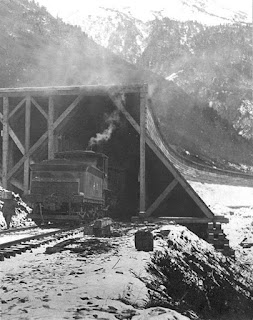 Nearing the upper flank of the approach to the pass the tracks duck into a 1238’ long slide-shed spanning a natural chute carved into the flank of the mountain by eons of wind and water. In addition to being prone to slides, this chute also tends to gather wind-driven snow along its leeward side, piling it into a train-stopping drift. When this happens the slide shed creates a tunnel through the drift so the trains can keep on moving. It will come into its own in a few months, sheltering the tracks from slides and the frequent winter winds, but today all it does is amplify the sound of the hardworking engine while trapping its wet smoke under the heavy timbers, forcing the crew to breath as shallowly as they can until open air finds them again at the other end.

From these high slopes, as long as you’re not inside the slide shed, a person can see down the mountain all the way to Daylight huddled there at its base. Beyond that is the bright shimmer of the white gypsum fields towards the western side of the basin and north of that, if you know where to look, the faint black slash of the lava fields. And to the west, all the way over on the far side of the basin, lurks the rugged blue outline of the San Andres range some 70 miles away. If you like long views that dwarf the scars of man into oblivion, riding the rails clinging here to the side of the mountain is the place for you. 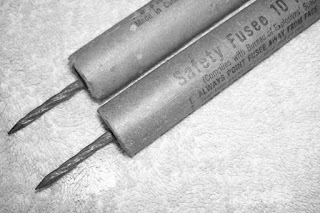 But near the top of the grade one last left hand curve puts the engine crew’s view behind as the tracks make the final eastward run up into the pass itself.

They run over a couple more burned out fusees as they climb the upper reaches of the grade,* but the last one, just before they reach the long left-hand curve on the final approach to Downhill, is still smoking.

*The speeder crew, or any train crew that thinks they may be over-run by a following train, is required to drop a fresh fusee about every 10 minutes until they can get into the clear. 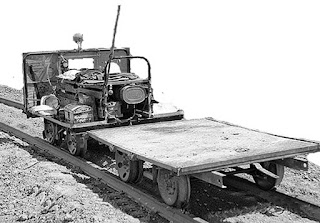 The little speeder the track-gang is using is even slower than the Freight and they have been catching up to it. Tom glances over at Jake who shrugs. Something isn’t right, probably one of the track-gang got hurt bad enough to need help, but they will have to wait to find out for sure. Right now their job is to get this train into Downhill.