The two or three regular readers I still have may recall that last fall my mom rendered me homeless by selling her condo of 30 plus years in a fifty or older community (fifty five or older when they first moved in) and moving to an independent living community.

Well in May I went up to see her new place in this community.

OK, technically she is living in the independent living portion of this community, which is by far the largest part of it, but there is also an assisted living as well as memory care unit on the grounds as well. They advertise that when you move here you never have to leave again. They even have special programs and funds in case you run out of money along the way. (To be fair, there is a stiff up-front buy-in that ensures a resident at least starts off in decent financial shape. That buy-in goes into escrow and either you or your heirs get it back when you leave. ) 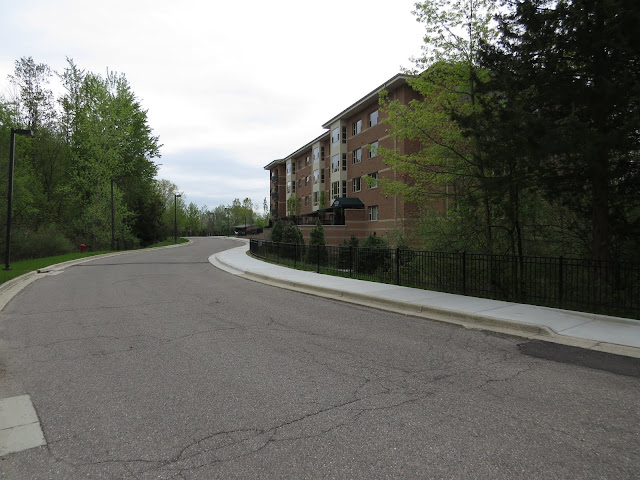 Speaking of large, this place is big! A walk around the perimeter sidewalk, which skirts several wet-lands and some woods, will cover just about a mile.

In fact the size of the place was one of Mom's concerns before choosing this community.

OK, truth is, Mom didn't have "concerns" --- she went bat-shit crazy during the whole selection, sell, move process. Even though it was 100% her choice to make this change she fretted and gnawed and worried and lost sleep, and an alarming amount of weight, over every little aspect of the process. Which in the end, after all the sleepless nights, all the imagined disasters, and countless phone-calls to talk her down off the ledge, went smoother than even us kids expected.

All is well now and it didn't take all that long for her to make her one bedroom, one bath apartment with laundry and big-ass walk-in closet, her own and get the feel of the place and become comfortable with moving around its many buildings. 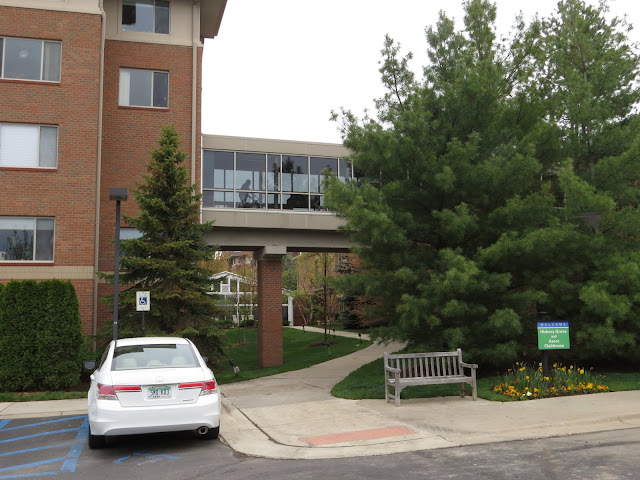 To facilitate the moving around the property part, in addition to impeccably maintained sidewalks, even in the winter, all the buildings are connected with walkways so a person can get anywhere on the campus without having to go outside. If you've ever been to Calgary and used the Plus-15 you know what I'm talking about.)

Which is good because part of the deal here is that you get 30 meal chits a month (More on the meal experience in another post) and there are two sit-down restaurants, one in each clubhouse, as well as a number of snack-bars, pubs, and even a miniature grocery with fresh hand-picked produce brought in once a week from a wholesaler. (Oh, and there's also a compact but complete kitchen in your apartment. Well, I say compact but Mom and I decided it's actually about the size of the kitchen she raised us 3 kids in-except we didn't have a dishwasher, other than us kids that is.)

Hell, Mom's bank even has a branch here on the property!

If you do ever need to go out, all the shopping you could wish for is within a couple of miles and you have your choice of either your car sitting in its assigned slot (The covered slots cost extra but there's also an on-site team that will clean your uncovered car of snow and ice for a fee.) or the property's shuttles that make both scheduled runs to popular spots such as grocery, drug, and department stores, as well as acting like a call-up taxi service, (as long as you plan a day or two ahead.) 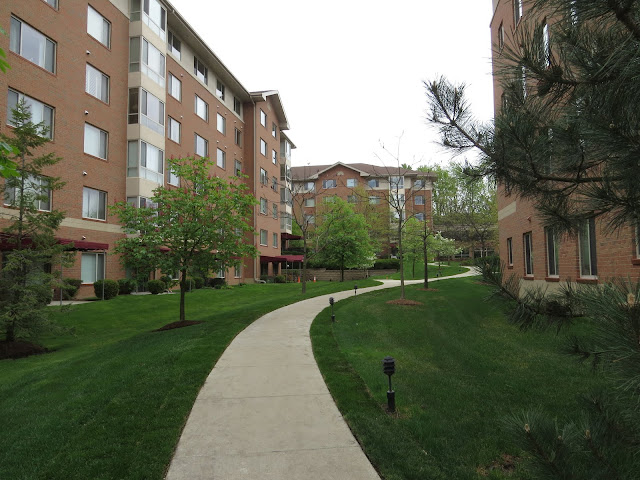 There are two separate clubhouses, game-rooms, an auditorium with fancy seats, nightly movies, frequent concerts and guest speakers covering a wide variety of subjects. a couple of gyms, an indoor pool, a beauty parlor, craft rooms, including a wood-shop and a whole lot of other stuff, such as on-site home nursing and an interior design studio to help you with decorating during move-in. (Each apartment is completely redone before every move-in with fresh paint and new carpets, and in Mom's case anyway, new appliances, though it took her several tries and at least once trip to the communal laundry to learn how to use that fancy new washing-machine.)

They even have their own TV studio and station on the property and while visiting I watched the annual board meeting which was filmed a few days before I got there. Monday's you can sit down for coffee with the executive director and share thoughts, concerns, whatever.

The schedule of available events is mind boggling and Mom has jumped right in with both feet. In fact she called my brother's wife and told her to tell him to stop trying to call her before 7PM because she is busy! 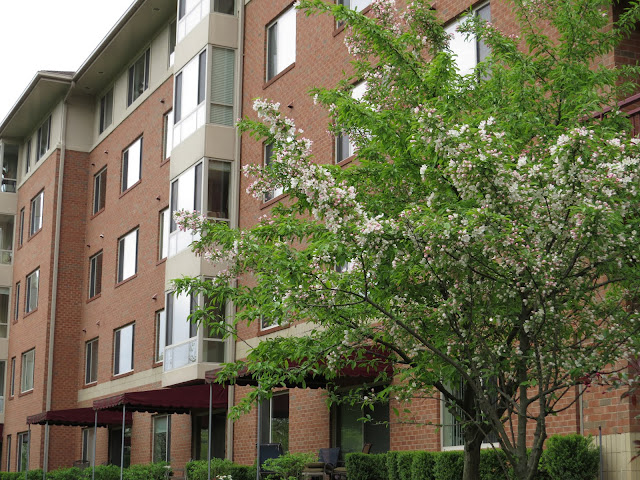 So, although being made homeless sucks, this was a great move for Mom and neither she nor us kids have any regrets. 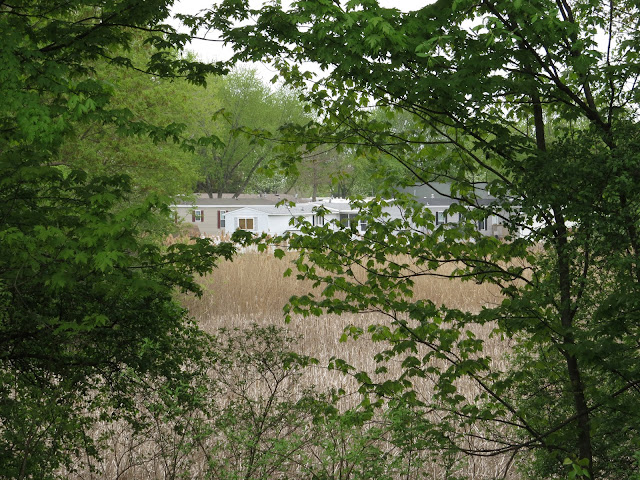 Oh, and you see that over there across the wetlands along the west side of the property? The First Wife and I lived over there in that mobile home park for a year or so during my brief foray back to Michigan in the late 70's. Back then where I'm standing to take this photo was just woods, swamps,  and fields.