Oh What Fresh Hell Is This?

The Van has a lot of lights on the dash. I mean a lot! And they can be very confusing. Like what the hell is a guy doing the backstroke in the rain (Center cluster, second row, second from right) supposed to be telling me?! (Time to add DEF. - I keep the owner's manual within reach of the driver's seat with the page explaining all those damn lights [page 28] dog-eared so I can find it quickly.)

Which is how I recently knew that a light had burned out when I was a few miles into Missouri just after crossing Arkansas from the southwest corner to the northeast corner of the state. (That little shining-faced, big nosed dude wearing a too small hat, center cluster, bottom row right) I even knew it was a headlight because that little bright-idea bastard lost his glow when I turned the headlights off but kept the running lights on.

I just went back through my maintenance records and of the 4 times since 2010 I have replaced headlight bulbs  on The Van, 3 of those can be traced back to me being either on Arkansas roads or just coming off of Arkansas roads. Now I have to admit, of the nearly 40 years I've been driving those Arkansas roads when getting from Texas to Michigan, in the past 15 there has been a lot of improvement. But when you start as far behind the eight-ball as Arkansas did "a lot" just isn't enough to catch all the way up to the civilized world and there are still stretches of Arkansas interstate that will jar your dentures off - even if you aren't wearing dentures!


Now I'm not saying there aren't other states with bad roads, hell, Michigan roads will turn your ride into scrap in just a few years, but I kinda expect that from a state where lawmakers have been convinced (Read bought off) by the teamsters union to allow them to run super-heavy truck-trains (At up to 160,000 pounds these things are heavy enough to turn even the best engineered road into rubble within a few years, I don't care how many axles you put under them!) on a daily, unsupervised, basis. But having grown up in Michigan I expect it there.

Anyway, back to my light bulb, my non-functioning light bulb. Of course, despite not yet being mid-day, the skies were, at that particular moment darkening up ahead and it had already spit some rain on me when the bulb went, but I was only 20 minutes from a fuel stop so I left the headlights off, you know, so I wouldn't look like a cockeyed hick driving a junkyard heap, (A phobia I come by honestly - thanks Dad!!) and kept on going with the running lights on.

By the time I got to the fuel stop it was raining like hell so I sat there and blocked the pump, one of only two diesel pumps out of a dozen, but still, the covered pump, while changing out the dead bulb. (Yes, I carry at least one spare for every bulb on The Van with me. Don't you?) The Van's headlights are well laid out and it takes no tools and only a short few minutes to change the bulbs.

Then I fired her back up, The Van I mean, which is about the only her I can fire up these days, moved her out of the way and braved the rain for the bathrooms.

When I got back the rain was still pounding down hard but my weather-bug app showed that by the time I hit the Mississippi River Bridge, 10 miles away, I would have driven out from under it. 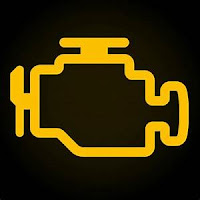 Except that when I started The Van back up the damn check engine light was on! OK, officially it's now called the EDI, Engine Diagnostic Indicator, but either way - CRAP!

When I grew up the check engine light coming on was really bad news. Like pull over and stop right now before the engine falls out bad news. Now days - well who knows what the hell the damn thing is complaining about.

Fortunately I have a DashDAQ permanently plugged into the diagnostic port. I mostly use it for displaying important gauges that the manufactures clearly think we are too stupid to deal with now days. Things like manifold pressure (turbo function), exhaust-gas temp, a real fuel gauge instead of that ridiculous tapered string of 10 bars, and an actual coolant temp instead of waiting for that silly red light, just to the right of the speedometer needle hub, to tell me I've already run the coolant temp up to 250 degrees  and need to shut the engine off NOW! But in addition to gauges, I can also use the DashDAQ to read codes.

Cool! - - - But now what the hell does P203D Reductant Sensor Circuit High mean?? Can I keep going or is my trip over and my wallet shredded?

Turns out I have a bad level sensor in the DEF tank, one that is showing 3.7 volts or more. (OK, you can start breathing again you silly old fool!)  Once the floating spots of impending black-out settled down in proportion to my anxiety level I pulled up my maintenance records and found I had added 2.5 gallons of DEF 2500 miles ago. Since The Van goes through 2.5 gallons, about half the capacity of the DEF tank, every 5000 miles I decided that I'll just add another jug when I get to my next overnight stop, which just so happens to be a Walmart in Fort Wayne. (I don't carry spare DEF because it's bulky and doesn't age well, especially in Texas heat.)

As one of the guys on a Ford forum found, adding that DEF also cleared the fault, presumably because the sensor is back under the surface again. Since the Ford sensor/heater cluster costs about $200 I figure the Mercedes version probably costs twice that, plus another $400 in labor to change it out. I got better things to do with my money (Which is why I live with the TPMS, [center cluster, top row, left] screaming at me all the time. I'm old school and check my tire pressures all the time anyway so that damned expensive, yet busted, TPMS crap can just suck it!) So, from now on, instead of waiting for that backstrokin'-in-the-rain dude to light up telling me I have about 1200 miles of DEF left in the tank, I guess I'll be using the P203D code to tell me I'm down about half a tank and need to add more DEF to kill the check engine light; you know, just in case there's something more important that wants to use that light too.