The easiest way to size a replacement V-belt is to read the number off the back of the original. Of course by the time you feel the need for a replacement the numbers are usually worn off by the idler. . .

An alternative strategy is to check the manual for the part number and try to cross-reference that nonsensical number back to the real world of V-belts. Of course that's assuming you can find the parts manual for a mower over 15 years old. . .

Or, you can just measure the existing belt.

Make a chalk-mark on the outside, set the mark at 0 on a tape measure, and roll the belt down the tape until you get back to the mark, then round down to the nearest inch to account for stretch to get the length. Measure across the outside of the belt and add a bit to account for wear to get the width. (measures 9/16's? Then it was a 5/8ths belt.) 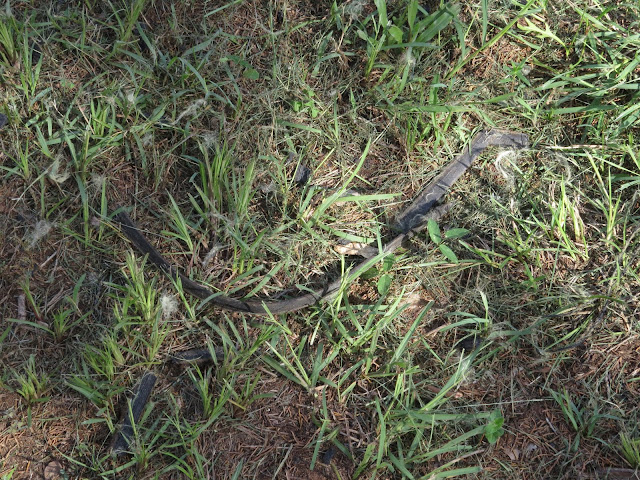 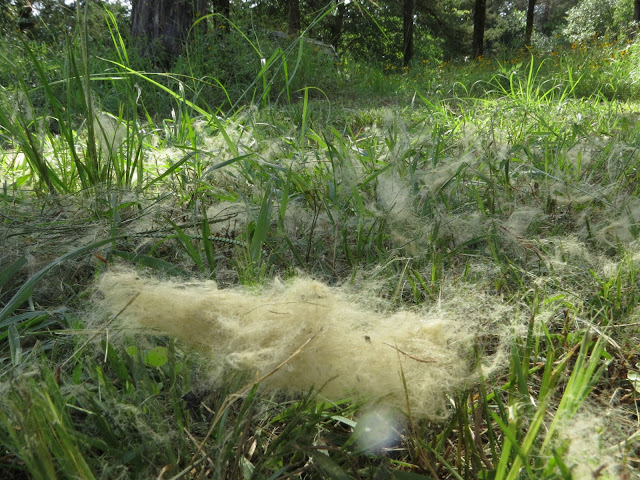 Your belt is now just a few shreds of rubber and some clouds of fluff that blew out from under the mower mid-mow. 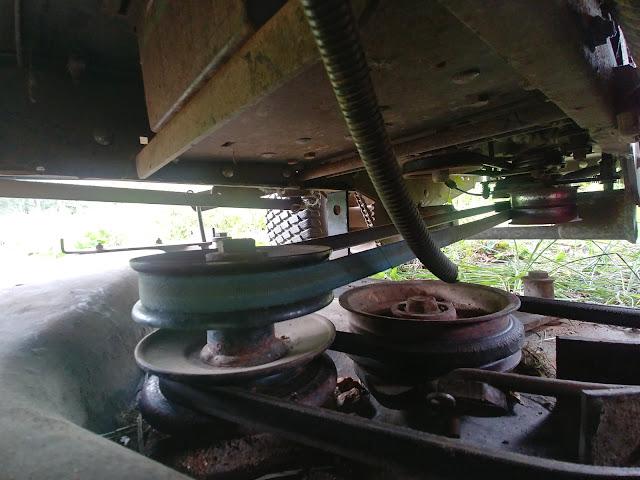 OK, I figured out what size belt I needed (The blue one is the new one) but to get it wrapped around the pulleys and settled onto the idler, the one with a really heavy spring on it, I had to pull a half-inch diameter, 20 inch long stabilizing pin at the front of the mower deck completely out and let the deck pivot backwards on the three hangers that hold it up off the ground at the desired cutting level. Now I could get this belt routed around all three pulleys. 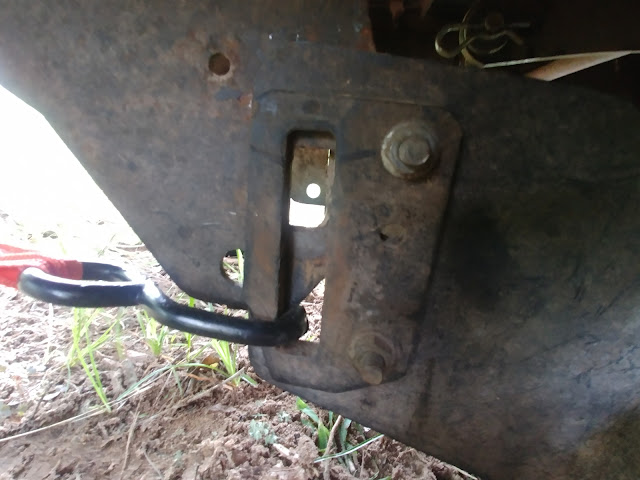 But to put it all back together the slot in the mower deck, the bit closest to you with the hook in it, needs to line up with a slot on the mower (Kinda visible through the top half of the deck-slot here but you have to look close to figure that out.) Only problem is that to move the two slots into alignment I had to overcome the spring-action of the drive-belt idler, and The Rock I am not! (I briefly tried to strong-arm it, but yeah, no way. . .) 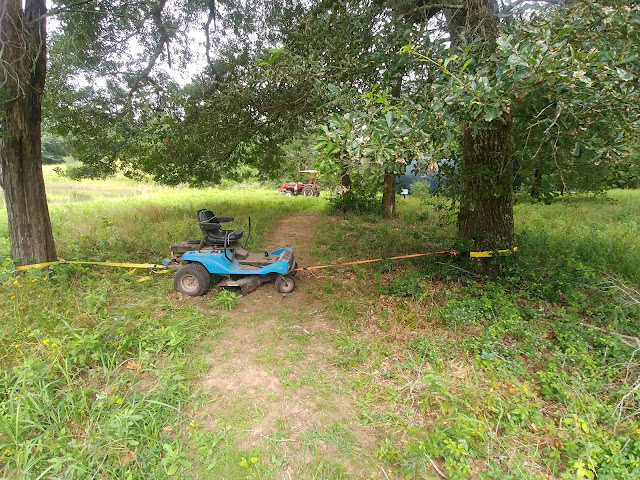 So I parked the mower between a couple of sturdy trees, hooked a strap from one tree to the front of the mower deck, (The red strap on the right and the hook in the previous photo.) attached another strap from the other tree to the mower's chassis, and started ratcheting. Eventually I got enough pull going to get the first set of slots to line up and was able to jam the pin through, but only through the one side. 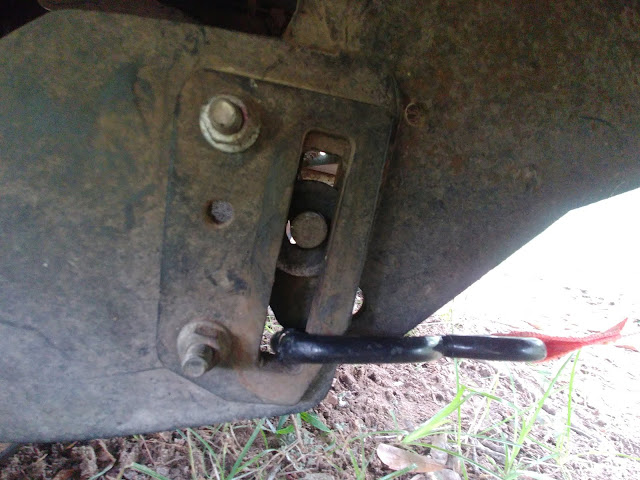 Because it makes me look like an idiot, I probably won't tell you that I ended up doing this three times.

The first time I had the deck out to measure for a new drive-belt I failed to pay attention to the belt that drives the three blades and when I put everything back together it started slipping so bad the blades weren't cutting (At least that's what I thought the issue was.)

After dropping the deck out from under the mower one more time I inspected the blade belt and it didn't look too bad, so I figured that the idler, which adjusts with a bolt and not a spring for this belt, was just too loose. I got that taken care of by tightening the bolt on the idler, reducing belt-deflection on the longest leg down to a quarter inch, put the deck back on the mower for the second time and the blade slip was even worse!

With the mower shut down and the key in my pocket, I reached under the deck, something I hadn't done yet so far, and found that the two outside blades were just spinning on their shafts.

One more time I dropped the deck, (I'm starting to get pretty good at that. Drive the big pin out, remove the clip and washer from the three hanger bolts, drop the deck to the ground, remove the drive belt, grab one end of the deck and drag it out from under the mower.) got my impact wrench out, tightened the blade-bolts as tight as 120 pounds of air pressure would go, and for the third time hung the deck back under the mower ---again.

A test cut showed that all was working now and I wasn't gong to have to drop that mower-deck again, at least not tomorrow. (I was done for today!) I guess next time I'd be doing myself a favor by checking everything the first time. If only I can remember that until next time. . .