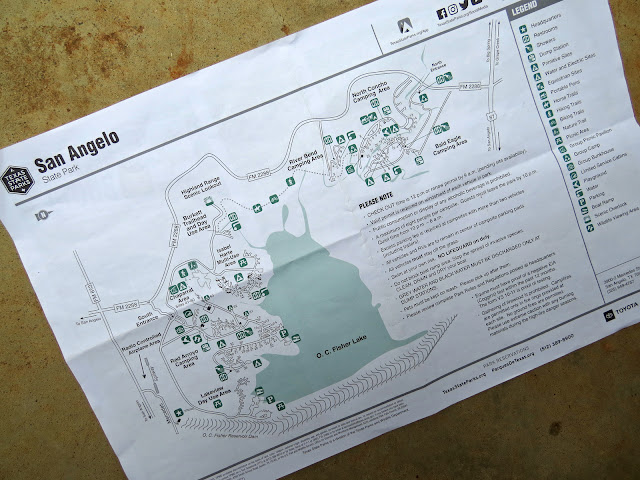 OK, this post is out of sequence, but as an afternoon stop-over it pretty much stands on its own anyway.

I'll get back to my drama-filled (At least in my mind) trip to Caprock Canyons the week before this next time, but for now come along as I check out San Angelo State Park. 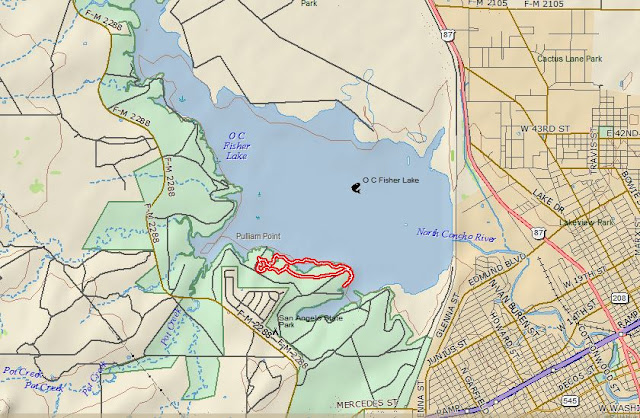 Many Texas State Parks are made up of former ranch lands. Not this one, which gives it a different kind of feel.
San Angelo State Park sits right on the edge of the city of San Angelo on land leased to the State by the Corp of Engineers who manage San Angelo Lake.
OK, OK, so officially the lake is called OC Fisher Lake, but that's only because of the common but somehow slightly distasteful practice of renaming things for politicians after the fact. (Case in point, another State Park is blatantly named for a McCarthy crony as well as the co-founder and Chairman of the House Committee Investigating Un-American Activities that chose to not go after the KKK because, to quote a committee member, "After all, the KKK is an old American institution.") Prior to this name-change, from the early 50's through to 1975, it was known as San Angelo Lake and perhaps still should be.
Probably because the dam forming the lake blocks the view, even though the park is right up against the city it seems more isolated than it is, 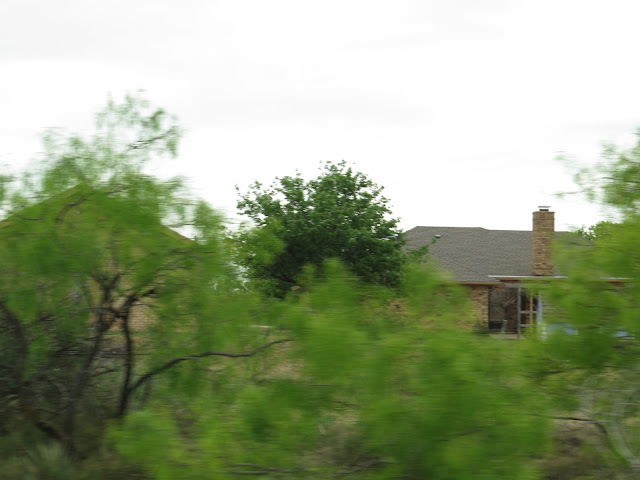 although the western edge of the park snuggles up tight to the backyards of the neighborhoods build on the heights above the lake. 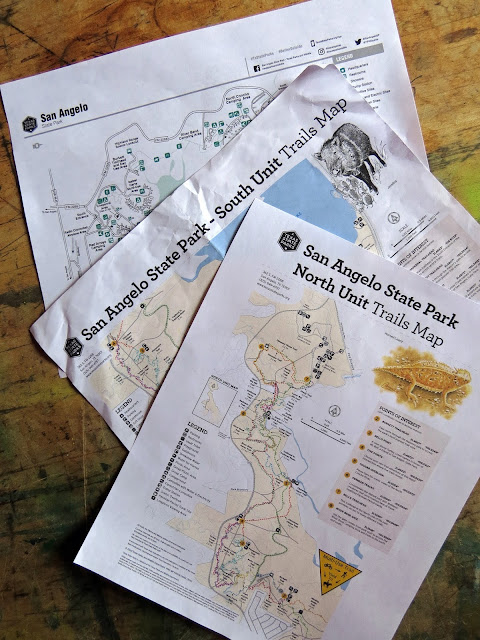 Over the years I have looked at this park, virtually anyway, several times, but frankly, without any other reference, the maps are confusing. And trying to reserve a campsite in this jumble of lines-on-paper is made more challenging by the fact that the various camping areas scattered around the park don't use unique numbers. There are at least 6 campsite #1's scattered around the park's two separate units and 7 different camping areas.

So I decided the only way I was going to figure this place out was to go see for myself. 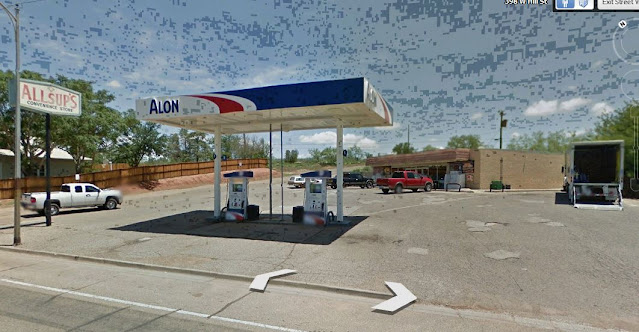 I got an early start on this Friday morning since the park was 250 miles away from where I was in Caprock Canyons and I wanted enough time left in the day to check things out properly once I got there.

From Caprock I headed straight, more or less anyway, south on State Route 70. And for those that can't stand to dawdle and smell the roses for even a few seconds, the speed limit on much of this little two-lane road is 75 MPH, the same as the US Highways and Freeways in this part of the State. And I'll have to apologize in advance to those anti-dawdlers that, by the way, usually just end up sitting at the stop-light right in front of me anyways, because I won't be doing a lick over 65 so you will just have to go around.

The road does briefly slow down as it threads through several little hamlets and towns along the way, but the surprise was the town of Spur, pop 1300.

Allsups is a little gas station/convenience store that can be found all over this region, even the smallest of towns has one. But, probably as a result of being the only game in town, most of them are cramped, crusty, and rundown looking, so it was a bit of a surprise to roll by this spacious one in Spur which was clean and bright with a parking lot noticeably lacking in the usual open potholes and weed-filled cracks.

Unlike the other SR-70 towns of Matador, Dickens, and Jayton, Spur does not sit on an intersection between the state road and a US highway, it's just a spot along the road in the middle of a lot of white space on the map, but in addition to that sparkling Allsups Spur also has a brand new Dollar General.

Oh, and for those so inclined, there's an equally fresh looking Dairy Queen right next to the Dollar General.

I made note of this since Spur is only about 80 miles from Caprock so it makes for a good spot to top up the fuel and supplies before heading into the Canyons when approaching along this route. 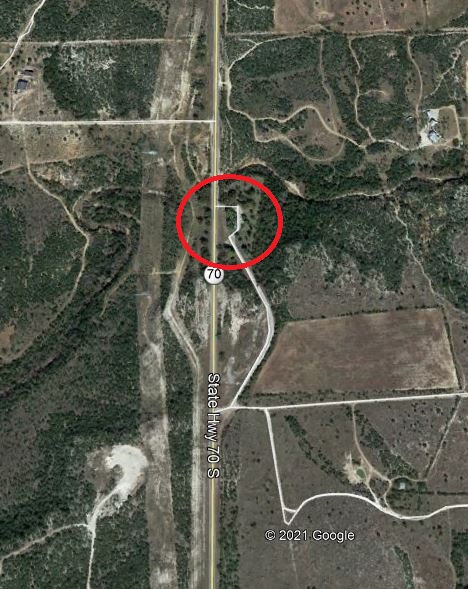 I also made note of this official state picnic area about 11 miles north of the intersection of 70 and US277 (About 22 miles south of Sweetawater which has a Walmar for those that prefer that overnighting option) and not quite 200 miles south of Caprock Canyons.

In fact I pulled in for a short break and to look it over.

It looks well maintained though doesn't seem like it's heavily used, and sits below the level of the highway with a decent buffer of vegetation and shrubbery between it and the lightly used road above.

Caprock Canyons is just a little too far from home for me to make the trip comfortably in a day and still get to the park while the office is open for check-in (Otherwise I have to come back up about 6 miles of winding and steep park road to officially check in by 0900 the next morning, right in the middle of prime hiking time!) so this is another stopover option which puts me within easy striking distance of the park the next day. 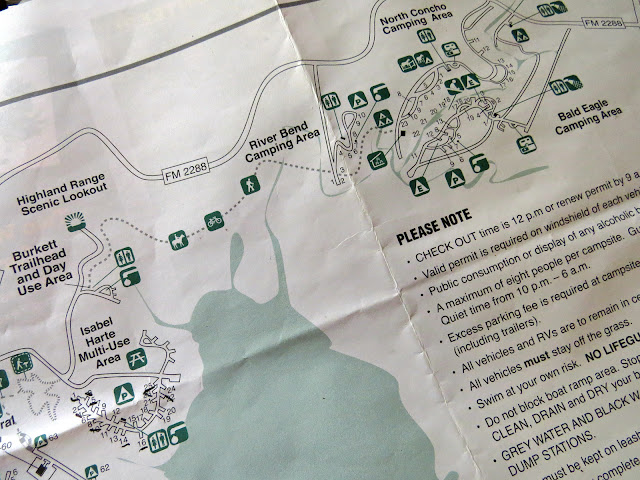 San Angelo State Park is split into a North and South units with, based on the map, no apparent internal public road connection between them. (This map is printed with North to the right and South to the left)
When I went by at around noon on a Friday the North Unit gate was closed and locked. I could see this from the highway so didn't bother turning in to read the many signs hanging off the gate. Maybe all I had to do was press a buzzer or something to get in, but I didn't bother.
Instead I continued on to the South Unit gate where the woman in the booth was maskless. A first for me since last March. But all I had to do was flap my pre-printed day-pass at her and she waved me on by. 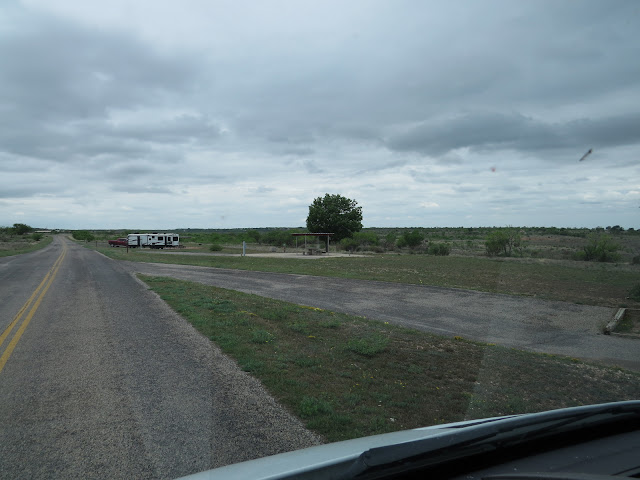 First stop, though technically I didn't really stop, was to drive straight ahead into the Red Arroyo camping area. These are a combination of pull-through and back-in water/electric sites with access to flush toilets and showers.
A pleasant enough area with well-spaced campsites, most with some sort of view of the lake, but I only tend to use water/electric sites where there's no other option. 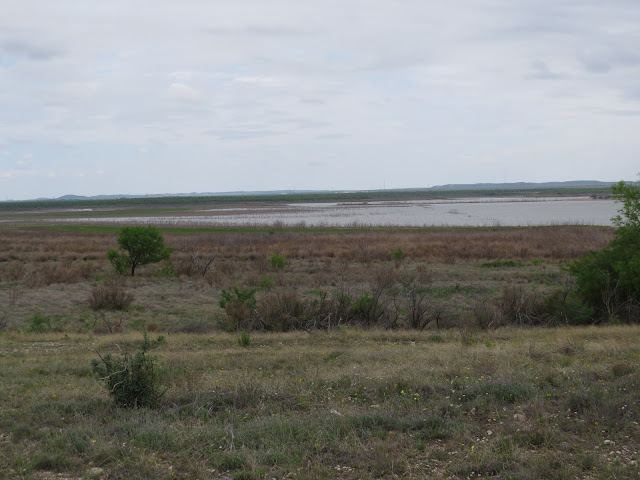 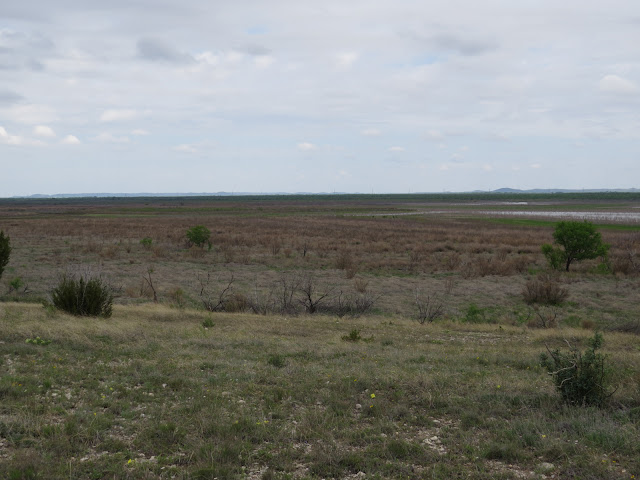 well - right now there's not much of it! (But more than there was nine years ago when it went completely dry!)
Not a big deal since this is primarily a flood control facility and only considered a secondary reservoir for the city, but I'm sure the fishing and boating folk would like to see more water! 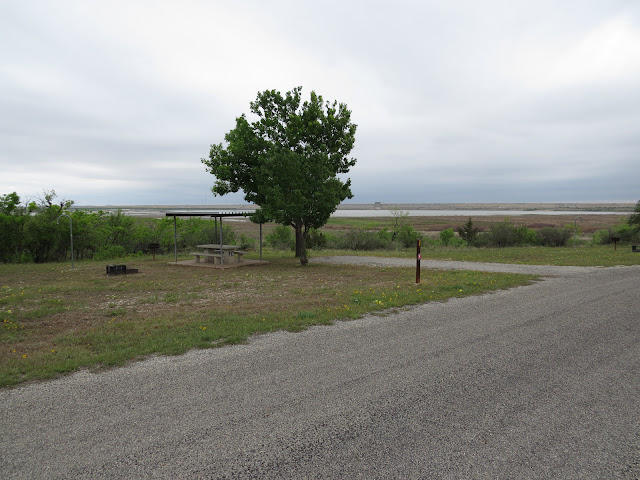 After cruising by the water/electric sites of Red Arroyo I moseyed on over (If you can mosey on 4 wheels instead of sitting in a saddle atop four legs.) to the Isabel Harte Multi-Use Area, which includes primitive campsites.
Although I would hardly call campsites with graveled parking pads and concrete picnic tables under hard-topped shelters primitive. I think it would be more accurate to call these dry camps instead and save the "primitive" label for those truly primitive sites.
In this case there is, for those brave enough to use it, a water-spigot next to the shower-less toilets.
Regardless of what they call it, this is more my speed!
Although it doesn't show in the photo, this camping area is built on a slope that runs down to the lake so most the parking pads are not exactly level, 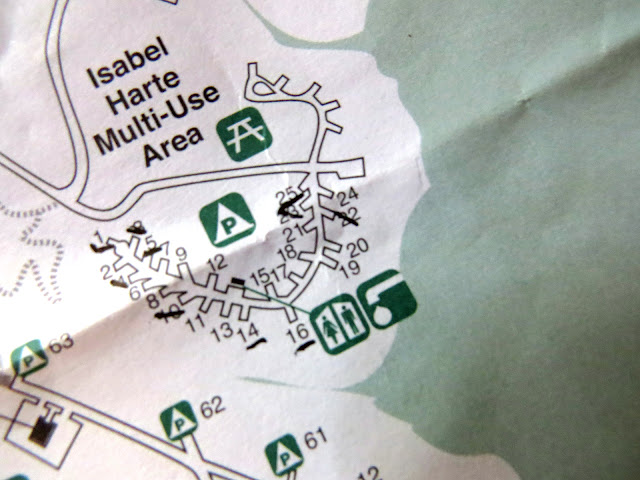 so, in anticipation of coming back some day for a more in-depth exploration of the park, I left The Van in that little parking area at the end of the road and walked the 25 sites of the campground, marking up my map as I went.
I crossed off those sites that are just too steep for comfortable van-camping. Sites that are passable I left unmarked. And I underlined the more desirable campsites, with #1, there at the far end, being my first choice.
By the way, this was a Friday afternoon, prime time for weekenders to be showing up, yet it wasn't until I was leaving that evening that a single camper pulled into one of the otherwise empty 25 campsites. 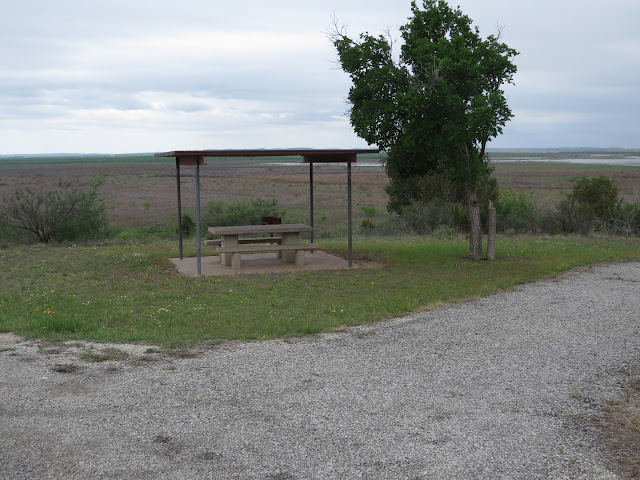 Right next to the camping area are an additional 5 sites that must have once also been campsites, 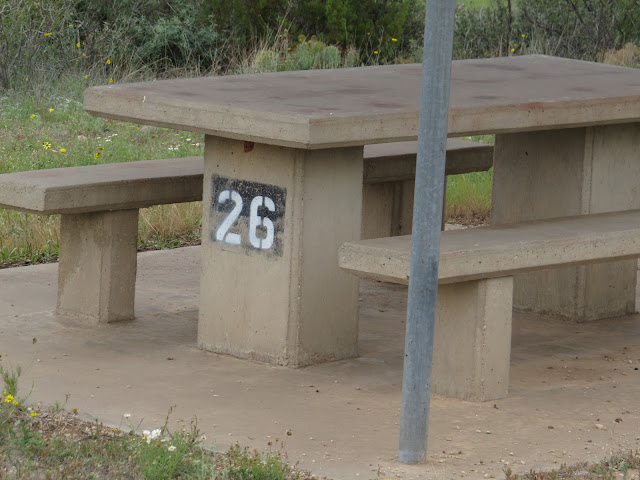 and still carry the numbers on the picnic tables, though the numbered posts out front are gone. That's because now these have been re-designated as day-use areas.

Despite the fact that the weather was closing in and starting to get a little wet, as long as I was already on foot anyway I decided to try out some of the many - many - trails 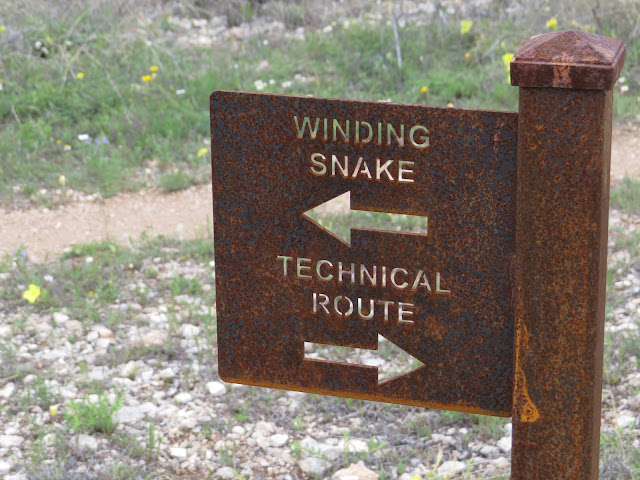 that twist and turn and overlap 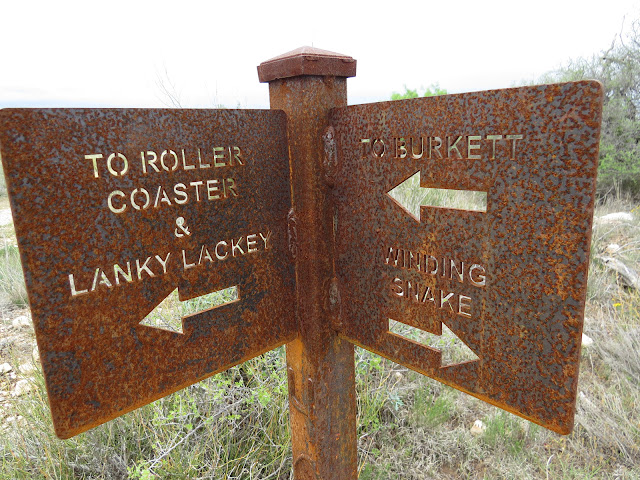 and crisscross in a complex maze all over the park. 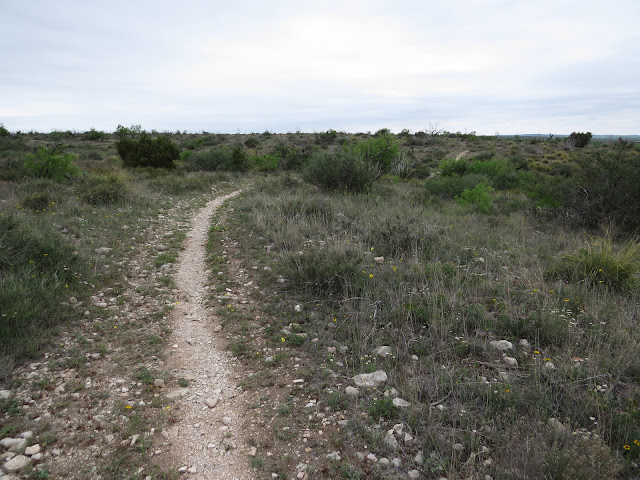 There's not near as much water involved as shows up on my map.
Some of the trails track along the grassy no-mans land between water and highlands, while others, a little further uphill, wind through a more wooded environment broken up occasionally with a small pond or swampy area. 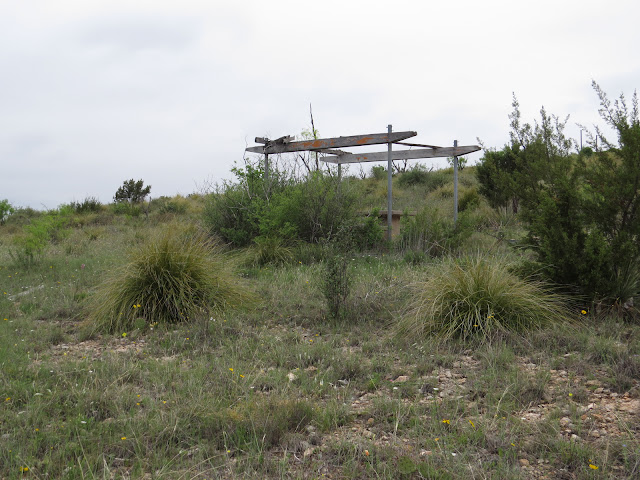 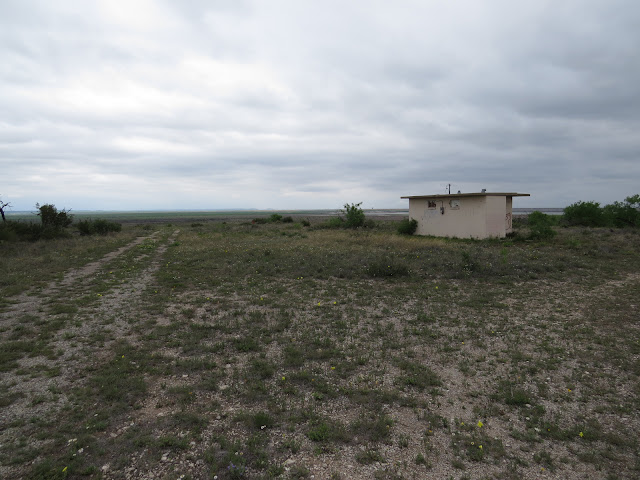 and as I looped back along higher ground later, I came across more evidence that this particular facility has been abandoned.
Clear indications that the park may not be seeing an especially high level of utilization these days. - Which is not a bad thing in my mind!
There were plenty of birds, deer, raccoon, and dueling turkeys to keep me company and I can do without the people! 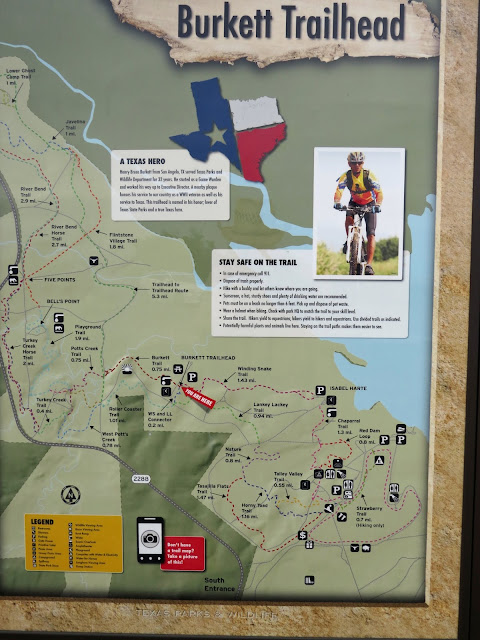 There are a whole lot more trails to explore here at San Angelo State Park and now that I know a little more about what I'm doing, I suspect that I'll be back to spend a few days doing exactly that, but by now I was getting pretty wet, so I retreated to The Van, moved her a little ways up to the Highland Range Scenic Lookout, and kicked back to kill the rest of the day and make a leisurely dinner before heading on out to my over-night spot at a rest area near Eden about 40 miles away.
Posted by greg at 3:23 PM