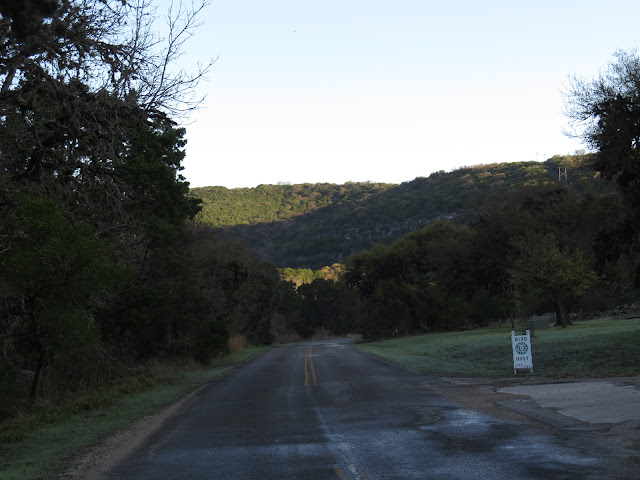 The clouds of yesterday have cleared on off and today (March 25) the sunrise is promising a sunglasses kinda day. 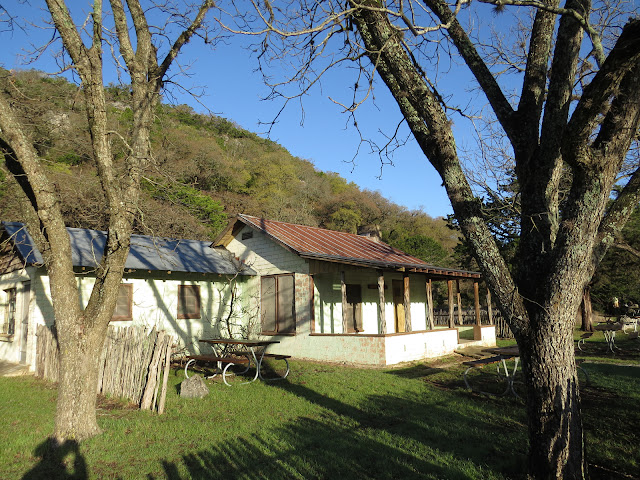 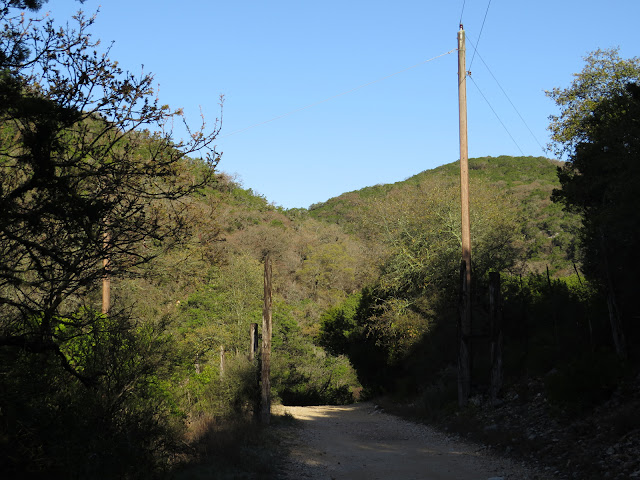 it was time to get serious about starting today's hike.

What I think of as the starting gate sure looks a whole lot different today than it did a couple days ago when it, and I, was shrouded in rain. 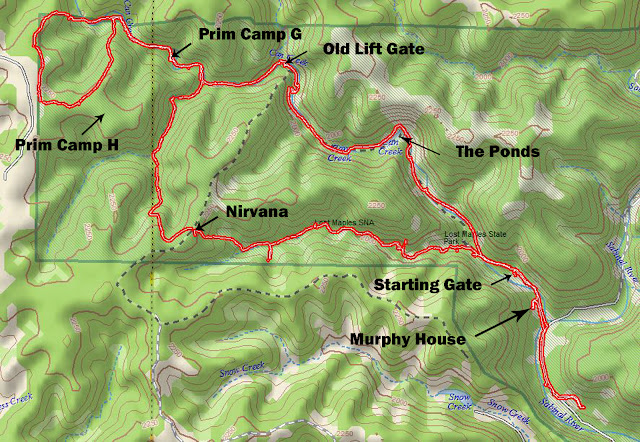 Today's hike is pretty much a reverse of yesterday's, but with the addition of the West Loop there in the top-left, where I pass by the final two primitive camping areas in the park. Because of the lollipop nature of the West Loop I will go by Primitive Camp G twice.

And throwing the West Loop into today's itinerary has me climbing up to the ridge-tops twice. (And I do this because I like it?! What is wrong with me???) 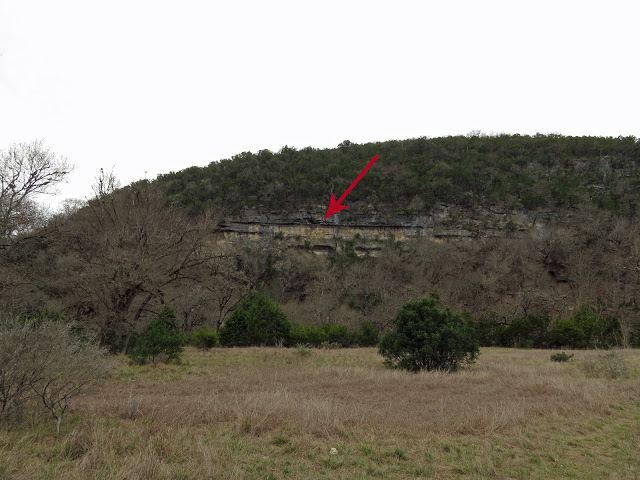 But for now - in another post a while back I pointed out that along here near the starting gate you can see a Hawk's nest up there on the cliff that the same pair have been using for years. 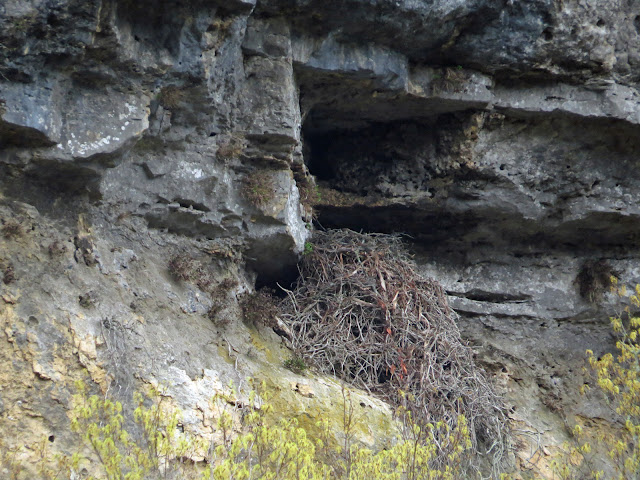 But I don't see any activity up there today.

Doesn't mean they are not around, just means I wasn't looking at the right time. Much of the canyon floor, 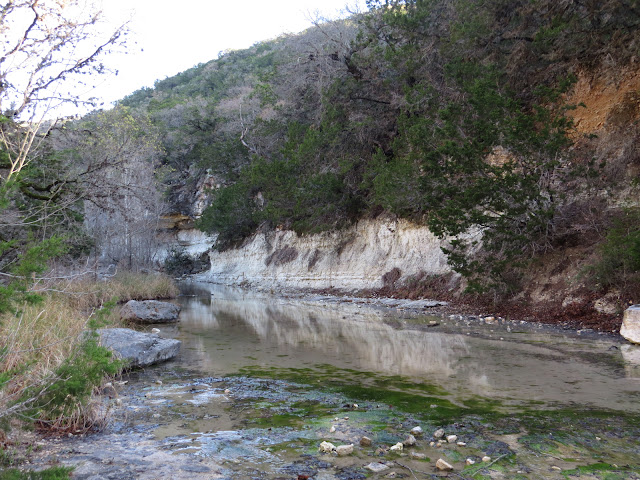 down here where I'm initially hiking, is still in shadow this time of day 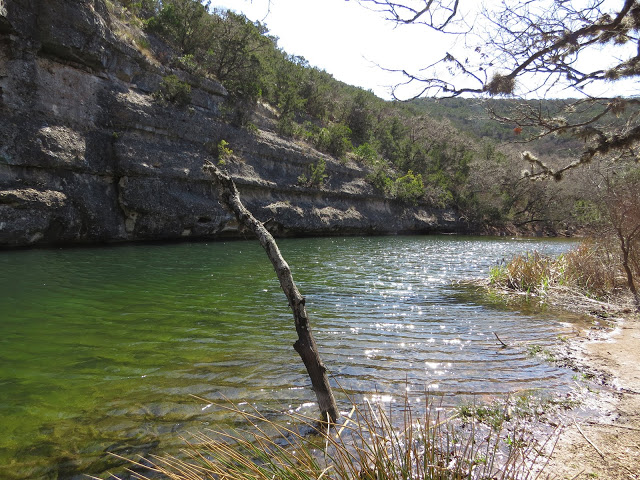 but when I turn the corner The Ponds are just getting lit up. 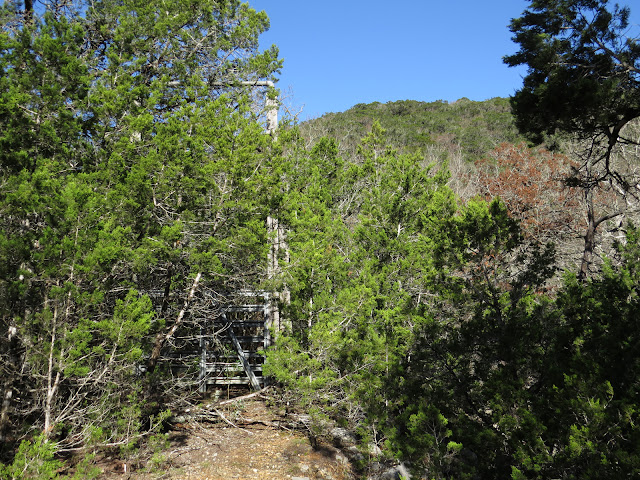 Up Can Creek beyond The Ponds there's a little bench where the service road, which is pretty much under the water in the middle of Can Creek from The Ponds up to here, turns away from the trail and climbs up towards Primitive Camp F.

What a lot of people miss noticing is that tucked into the far corner of this small bench is the gate of what I assume used to be a livestock loading/unloading area. 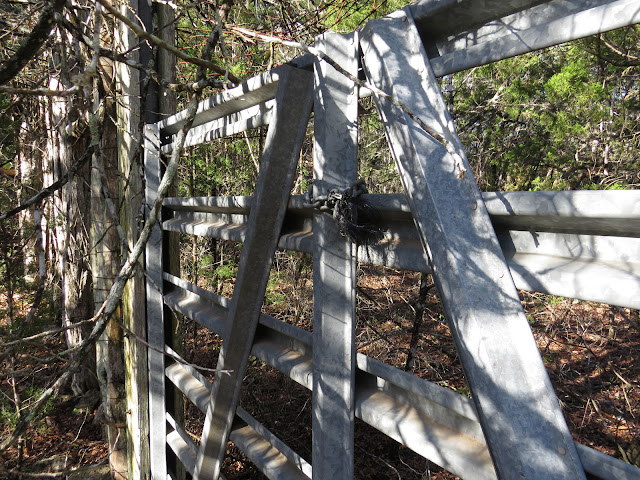 The pen behind the gate and gate clearly haven't been used in a while, probably nearly 40 years now, ever since the park service bought the land, but the gate itself still looks pretty dang good, 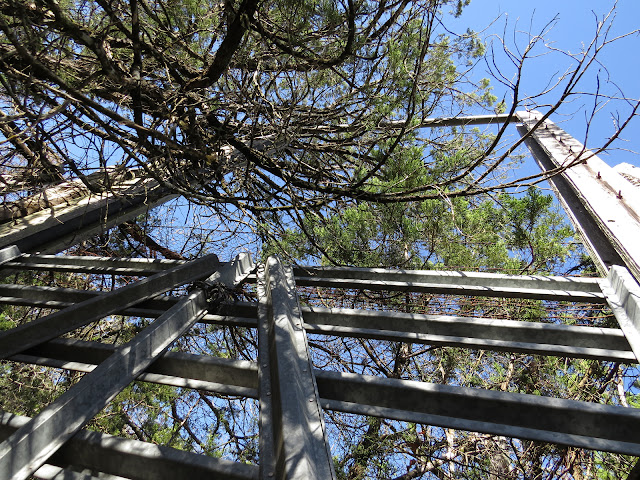 though it has been inoperable for some time.

It might seem a little elaborate for something out here, but instead of swinging on hinges this gate used to lift up in tracks fashioned from 5" steel pipe with guide-boards bolted on either side. The two vertical pipes are connected at the top by another steel pipe cross-piece from which the lifting-gear used to hang. This is so that stock trailers can be backed up to the gate then the gate opened without creating the opportunity for escape a swinging gate that has to be opened before the trailer is backed up tight would.

The gate and pen are well overgrown now, but if you listen close you can almost hear the chatter of a pen full of goats and the men working them.

But since I'm not penned up behind the gate - on with the hike. 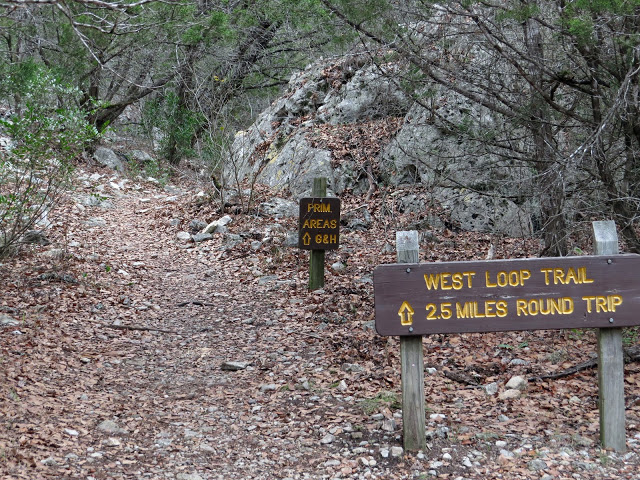 And it's soon time for the foolish to temporarily leave the shorter, one-hump sanctuary of the West Trail and climb up to the first hump of the day - only to climb right back down again to this exact same spot - - -

Primitive Camp G is just up ahead and doesn't require much climbing from here, but Primitive Camp H is perched up on top of the ridge above and no mater which way around you hike the loop, it's a climb to get there, which is probably why it's one of the lesser-used camp areas. 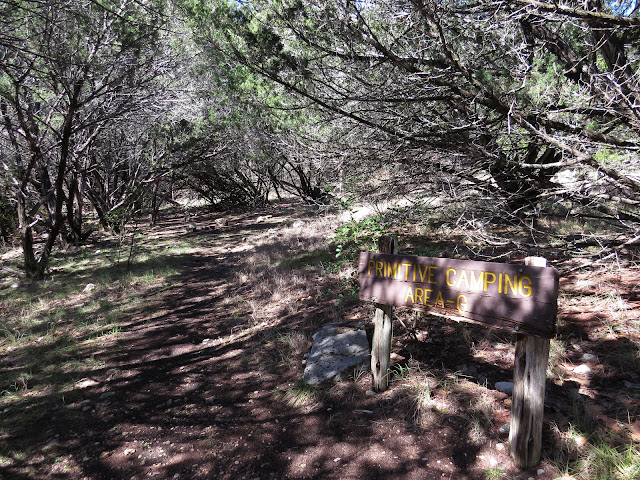 By the time I come down off the drier ridge-top with is shorter hardscrabble scrub-cedar into the dappled light of the lushly grown canyon and pass Primitive Camp G for the second time today I'm more than ready for lunch. 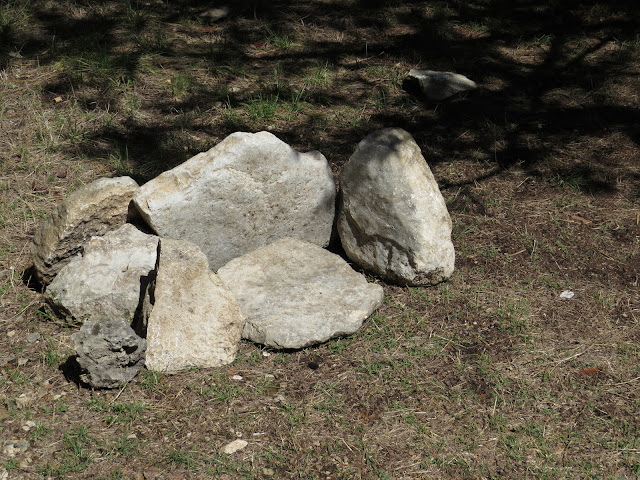 Someone has graciously built a throne at one of the campsites, but though I'm sure it's a great spot for sitting in front of the campfire (NOT ALLOWED!) at night, right now it's a little too much in-the-sun for my taste, 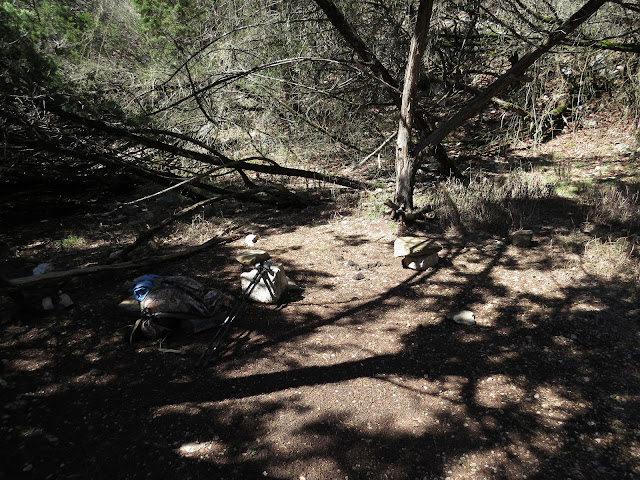 so I find myself a more shaded spot farther back off the trail to kick back and enjoy the natural solitude. (To this point I hadn't seen anybody else all day and I was feeling lonely - - OK, just kidding - - It was great!! My kinda day!) 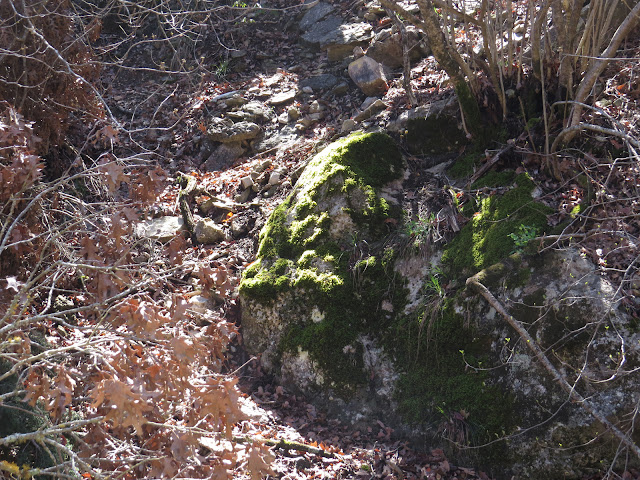 But the sun was moving on and I still had one more hump to go before I could go wandering back to the sanctuary of The Van.

So I packed up my stuff, got my feet back under me, and headed through the ever-changing light up Mystic Canyon towards Nirvana (That composting toilet that marks the high-point of the next hump) and from there, eventually the trailhead then camp. 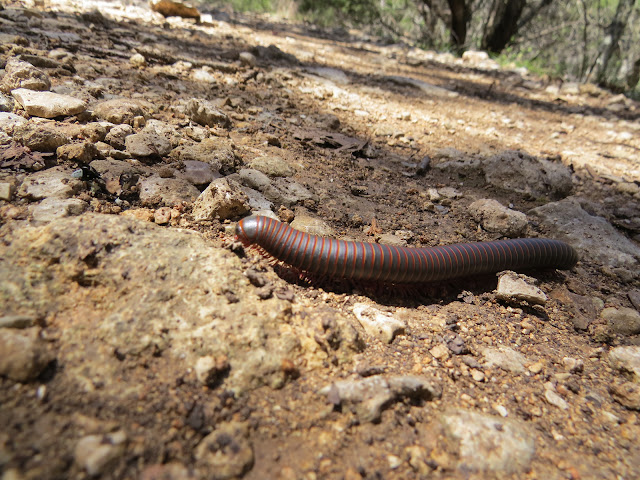 Coming down off that last hump I started seeing some people.

First a serious, wordless, barely-a-glance-as-she-went-by woman about my age (I get it. Unfortunately lone women out in the wilderness often feel more comfortable keeping others, especially lone males with a couple week's worth of stubble, even if it is hidden behind my mask, at arms length.)  just starting down into Mystic Canyon.

Third, a young couple with kid-in-backpack-chair just above Primitive Camp D asking if the climb ahead was any less steep than the climb at The Grotto on the East Trail. Seems that when they saw the "steps" of the East Trail climb they turned around. I told them it's not really any less steep, but there's no "steps" and they've already done some of the climbing just getting to this point so it's not as far to the top. - I have no idea how they fared.

And fourth, and most interesting, I was held up as this local inhabitant made a mesmerizingly rhythmic crossing of the rocky trail in front of me. Sometimes it's hard enough keeping two legs under control but this guy handles 100 legs (one pair of jointed legs, each slightly longer than the pair in front of it, per each of its 50 segments) with the grace of a ballerina! 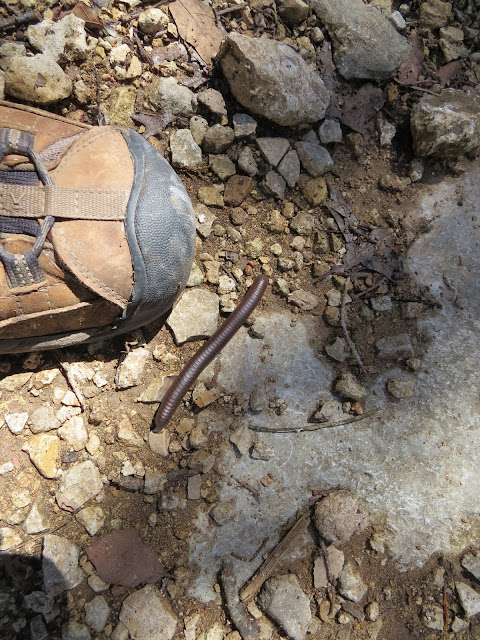 We conversed for a while - longer than with any of the other users of the trail today - but she was far more focused on locomotion than conversation, so we parted ways, each of us headed for our own respective campsites.

Maybe I'm a better conversationalist than I thought?!