Caprock Clouds, Conga Lines, and Limbering up the GPS 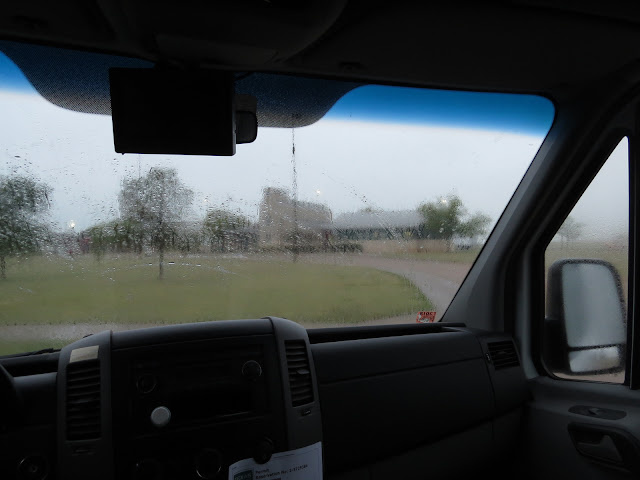 It's Friday morning (Apr 23) and though it's difficult to tell given the iffy weather and limited visibility, I'm sitting in the rest area where I spent a quiet night.

Why am I sitting here instead of tucked away in my bed at home?

If you look close down at the bottom-center of the photo, under the "paperwork clip" so thoughtfully provided by Mercedes, you can just see my pre-printed permit for a week's stay at Caprock Canyons State Park.

Since the park is about an 11-12 hour drive from home I usually head out the day before and knock about 8 hours of that drive off so I can arrive at the park at a decent hour the next day. 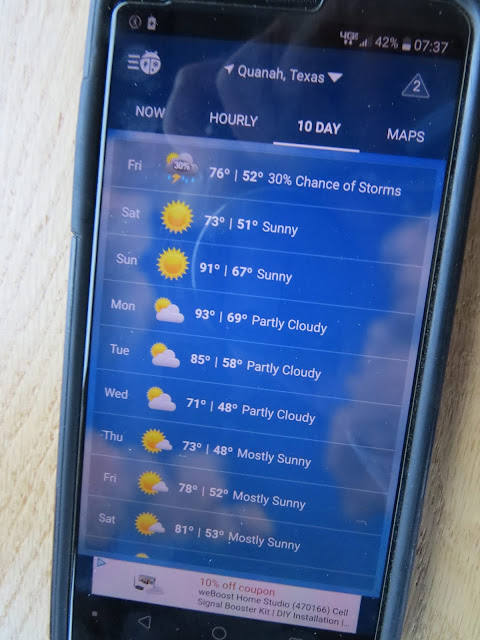 And while I'm here on the highway with decent cell reception (reception in the park is only available on top of a couple of the roadless ridges, all of which are at least a 4 mile round-trip hike away.) I checked to get an idea of what the weather might be for my stay.

Bearing in mind that this is spring on the high plains so any forecast is just an approximation.

I'm headed deep into the canyons to where that little loop at the end of the road is, 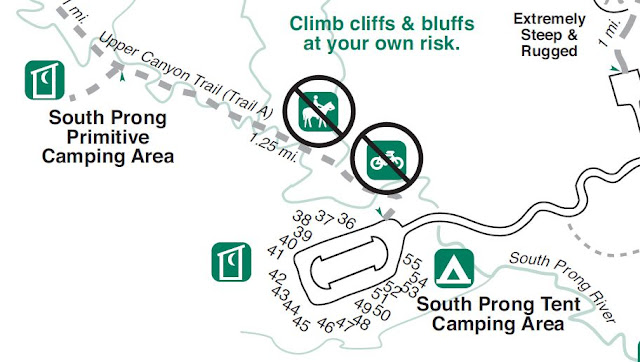 where I have a reservation for my favorite campsite, #49, which, because there wasn't enough space to print the numbers in their true locations, is actually right there between where #46 & 47 sits on this map. 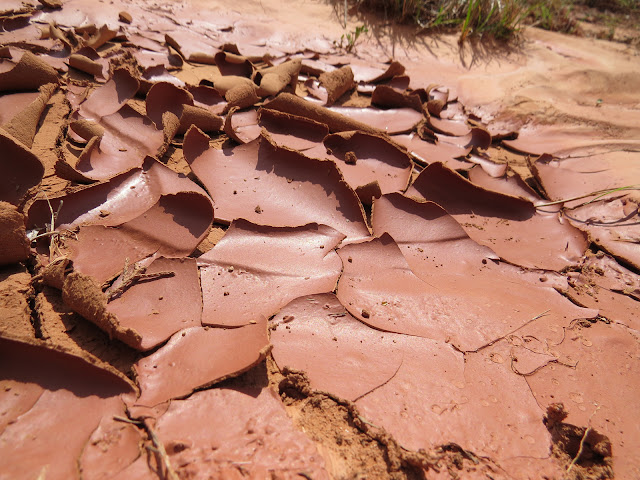 The first thing I noticed was evidence that the rain I encountered last night made it this far as well. Though in this parched land things tend to dry up quickly. 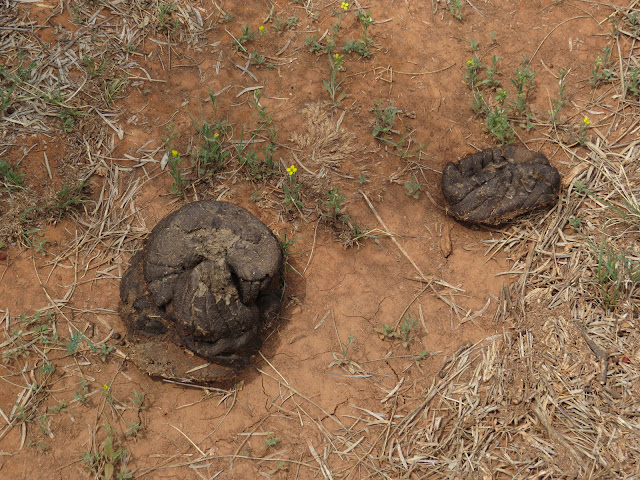 The second thing I noticed was evidence of Bison right in my campsite. Not so stale evidence either! These chips are not dried out enough to be ready for the fire just yet. 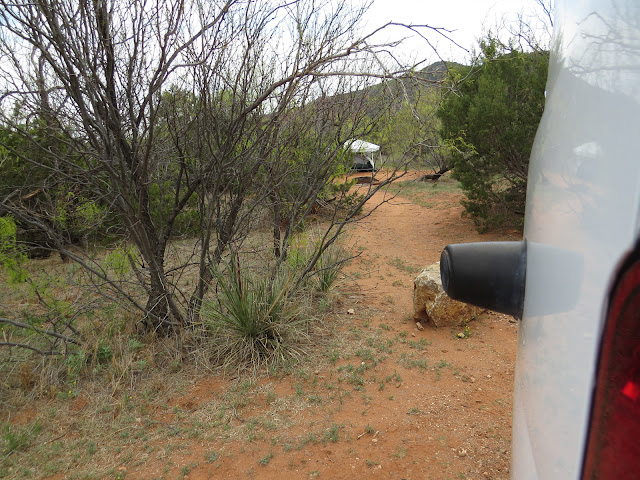 But I went ahead and set up camp back there anyway, even though I might have to share it. 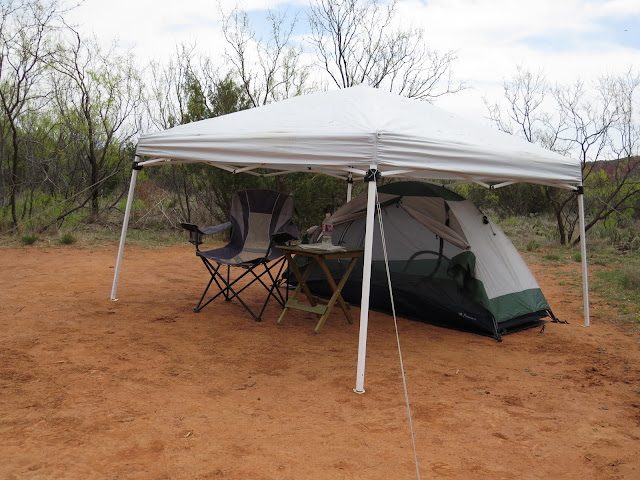 And yes, I did actually spend a couple nights in the tent because after a hot day the tent cools down faster than The Van, and also to keep myself familiar with my back-packing gear. (Not the canopy! That's not backpacking gear, just a walk-in camp bonus.)

But you better make sure you stake everything down well because it can, and did, get quite windy at times during the week as springtime pop-up thunderstorms sweep through. (I saw at least one tent broken and partially collapsed after a "robust" night.) 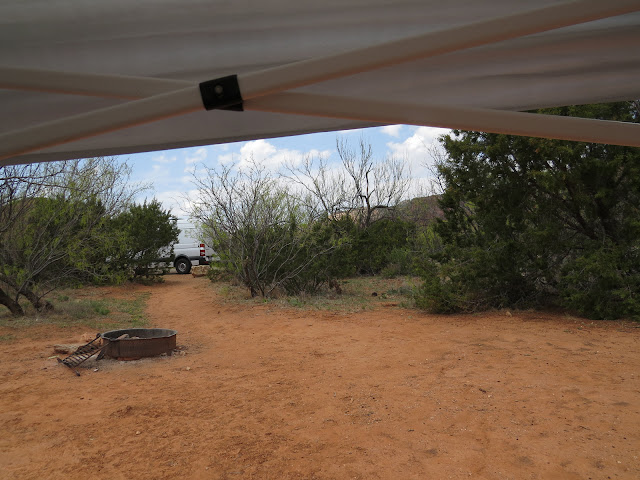 In addition to site 49 being a little more isolated than some of the other sites, I like it because it's one of the sites with just enough room out there to get The Van tucked in off the road yet still directly adjacent to the campsite. Important when you do all your cooking in The Van because everything is handy, but all your eating and lounging out in the campsite because - well - this is camping not appartmenting. 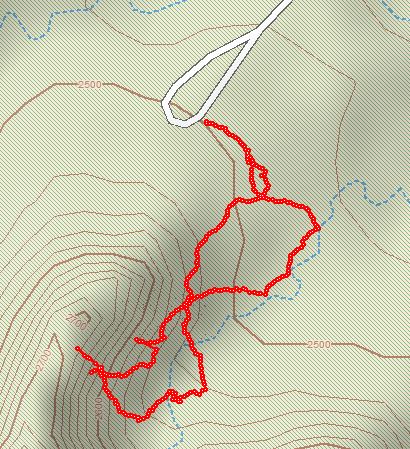 With camp set up I had time left over in the day to limber up the GPS - which tends to take a while finding itself the first time it's turned on after moving to a new area - and take a short, track-less wander out behind my tent. 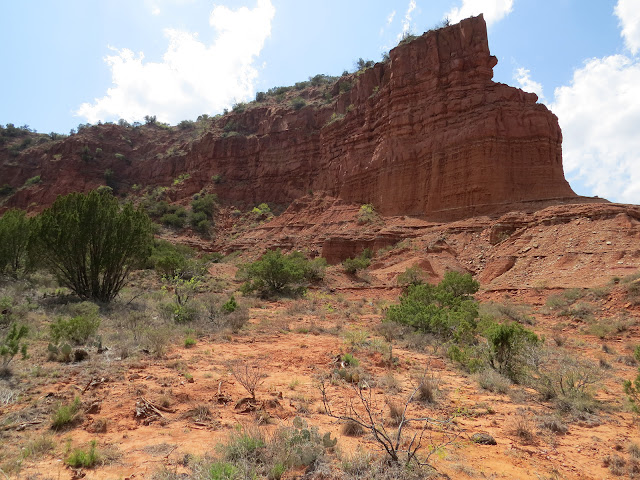 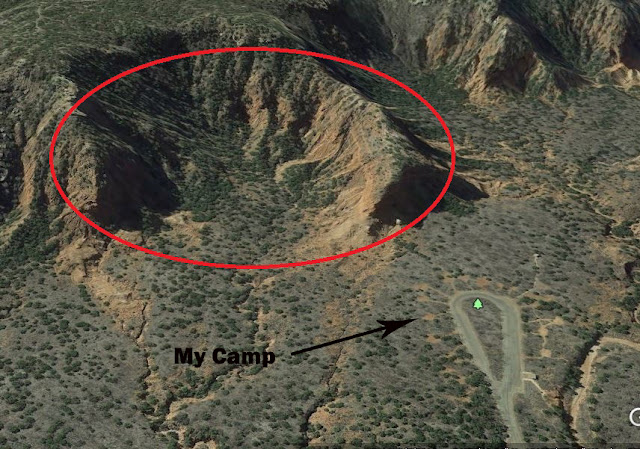 in the fold tucked up under that ridge just to my southwest. 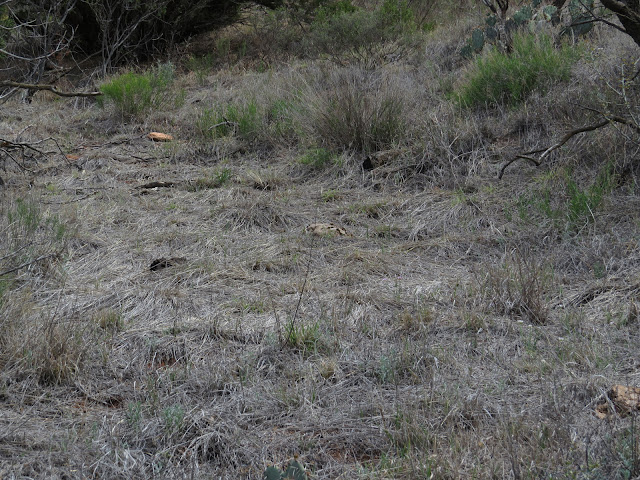 It wasn't long before I stumbled across more bison sign - unless that was a really - really - big deer that bedded down there! 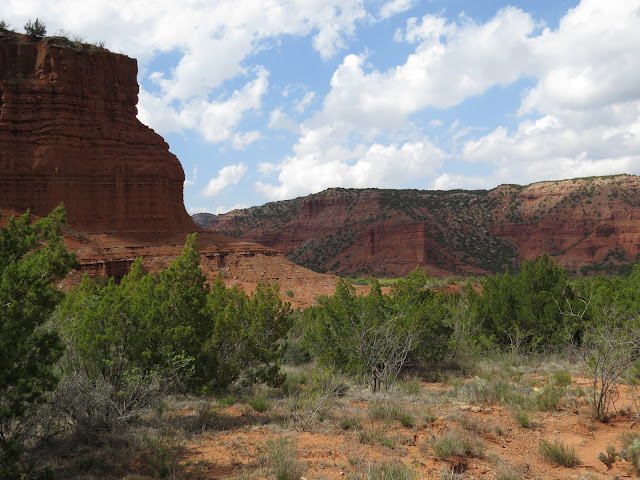 As I picked my way along the base of that ridge 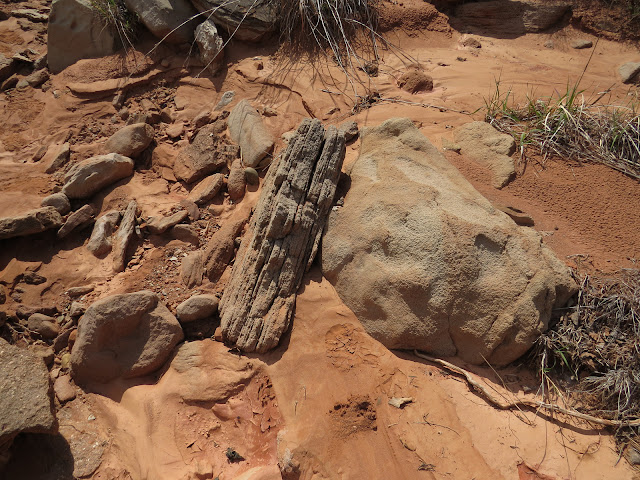 I occasionally came across bits of the harder rock from above, including the namesake caprock - that smoother boulder to the right - that had fallen away from its high perch as erosion marches on 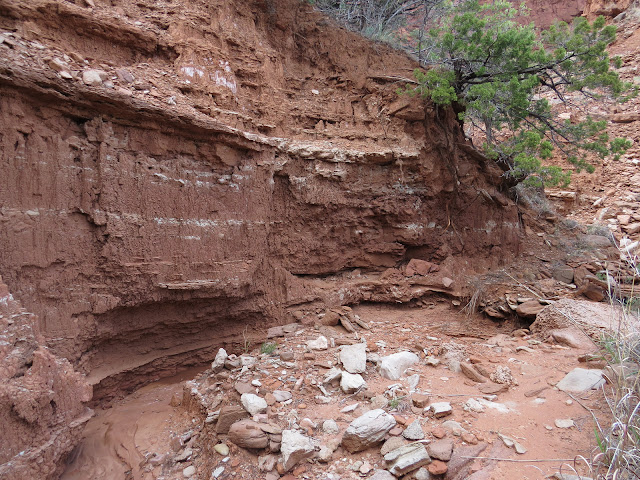 as well as bits of pure gypsum that have eroded out of the softer iron-rich rock that used to be the bottom of the Permian Sea. 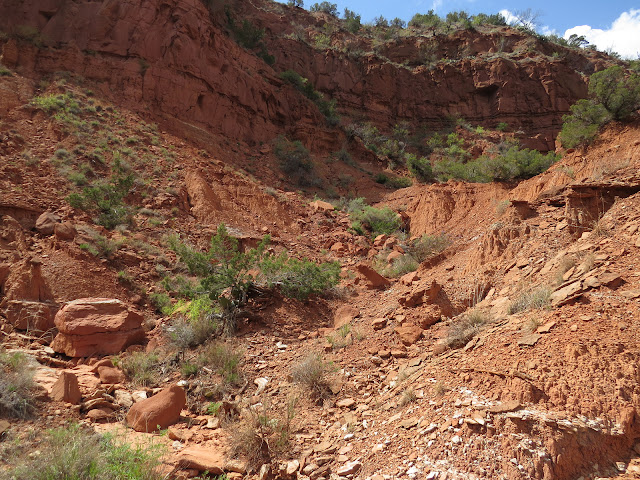 There was a little bit of scrambling and climbing involved 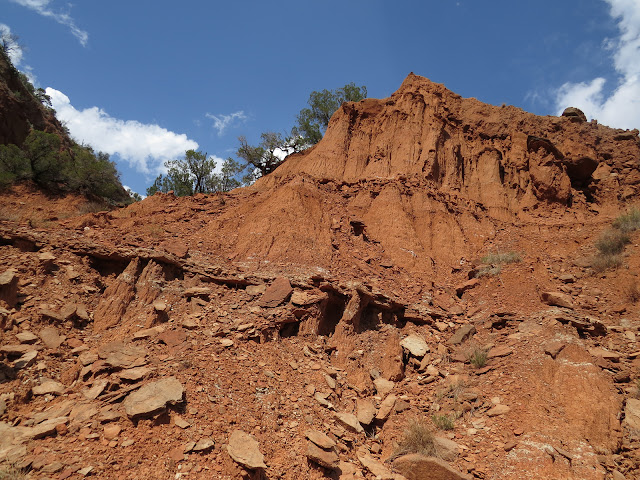 as I worked my way around 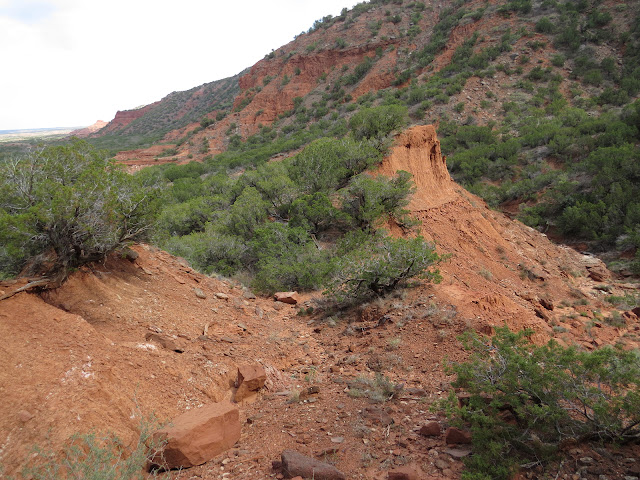 a mini-ridge tucked into the fold of that larger ridge. 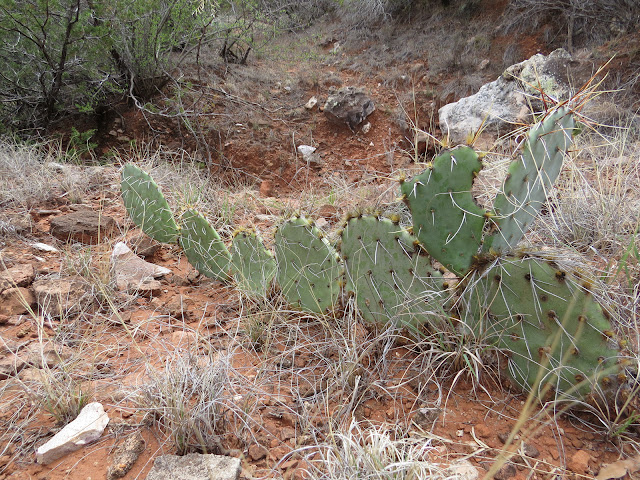 Along the way I stumbled across this conga-line of Prickly Pear apparently taking its own little ramble out here. 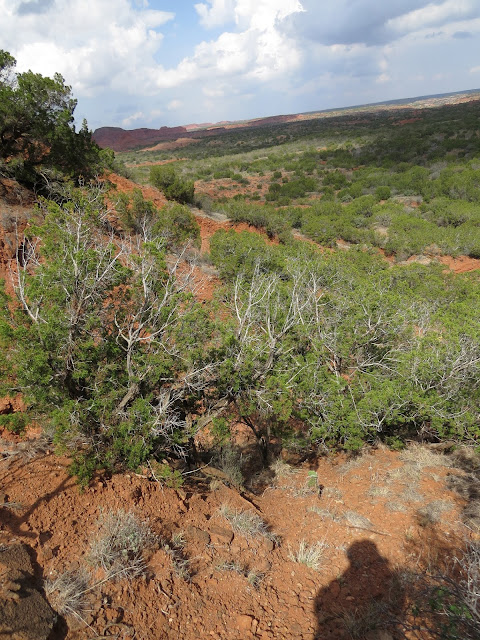 Once in a while the Sun managed to work it's way through the rapidly changing clouds and actually cast shadows. 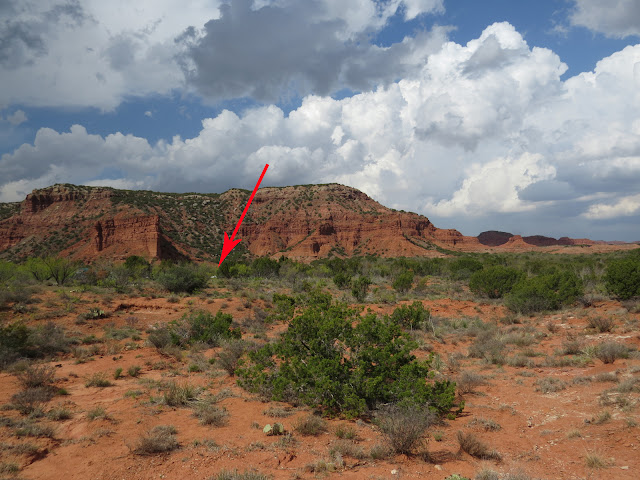 But this was always just going to be a short ramble and eventually I scrambled my way around and back within sight of camp. 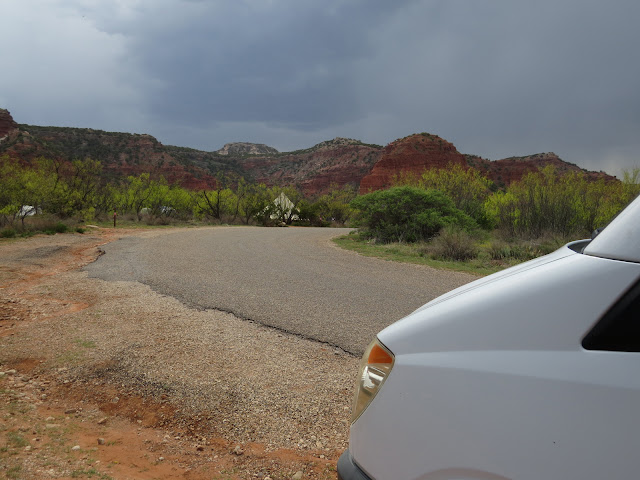 There wasn't going to be much of a sunset tonight, but that's OK. I'm here for a week.