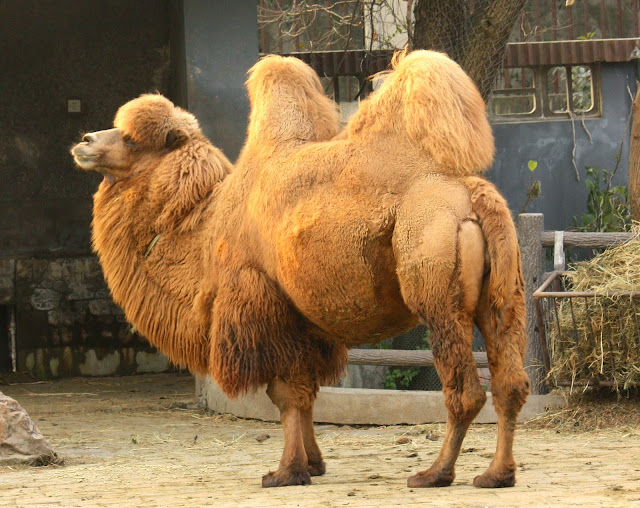 Is it sad that I know a shaggy, two-humped camel from the Bactria region is called a Bactrian? Yeah, I think that's probably sad - - -

Anyway - the sun was rising into a clear sky and putting an end to my last night at Lost Maples.

Today (March 26) I have to give up my campsite to someone that reserved it for the weekend.

I could have headed on home to a washing machine, hot showers, and an evening of TV, but nooo - - - That makes too much sense and I wouldn't want to start getting that kind of reputation! 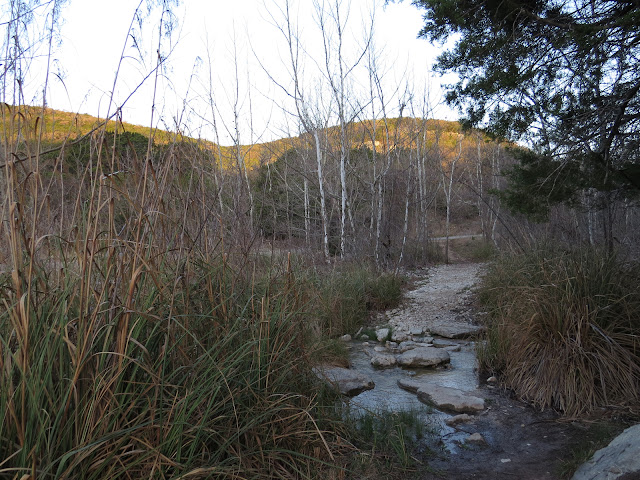 Instead I moved The Van over to the Murphy House Trailhead where I could leave it past the noon campsite checkout deadline without a Park Ranger getting after me and put boot to trail yet again. 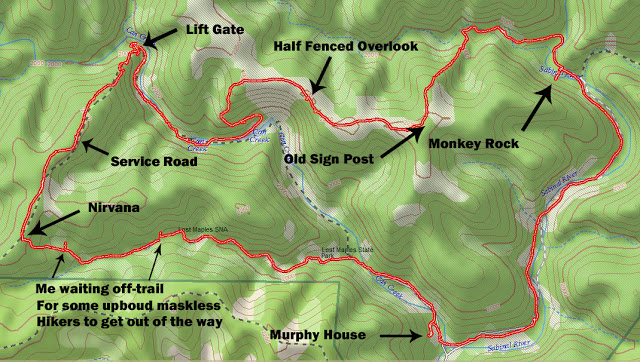 Today I'm stringing all of the East then much of the West Trails together but bypassing Mystic Canyon by cutting off onto the north end of the service road that goes up to primitive camps E & F, which is the one little bit of "trail" I haven't hiked yet this trip.

This makes it another two-hump day, but hey! I'm not often accused of being smart.

I've just covered most of this ground over the past few days so will try not to repeat myself too much. 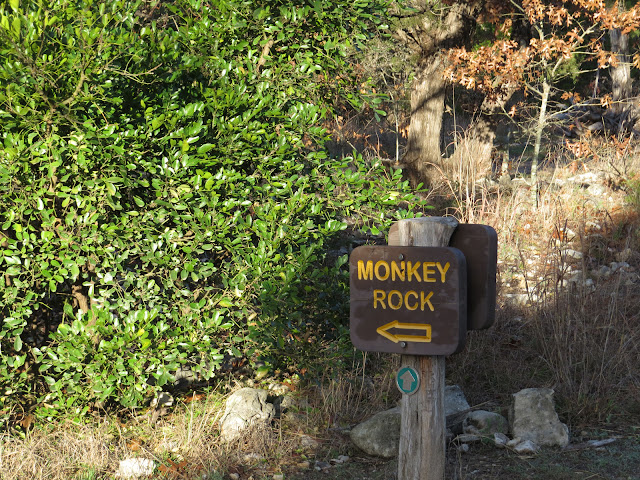 After all, been there done that many times before. 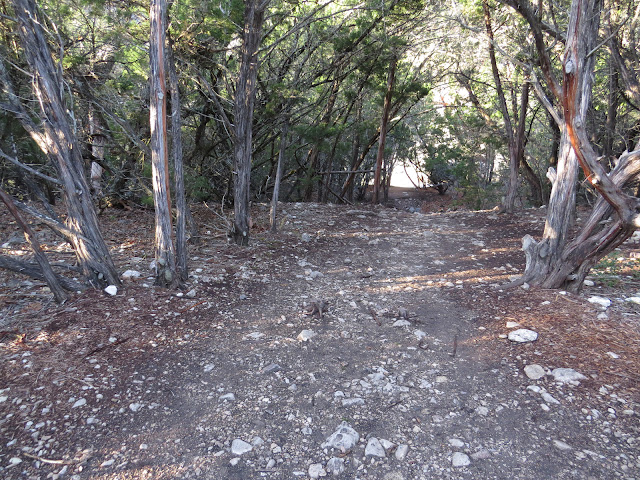 but it's just a short side trip down a steep bank, (With rope handrails for those looking for a little help) so I decided what the hell. 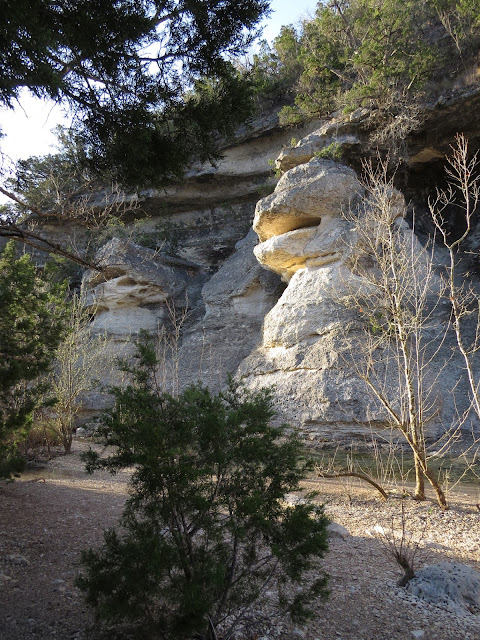 And, as is usually the case, taking the time to make the little bit of extra effort was the right choice.

For about five minutes as the sun rose above the canyon rim the light was perfect. Better than shows up in the photo (Yeah, I've complained before that my camera doesn't always catch what I see.) 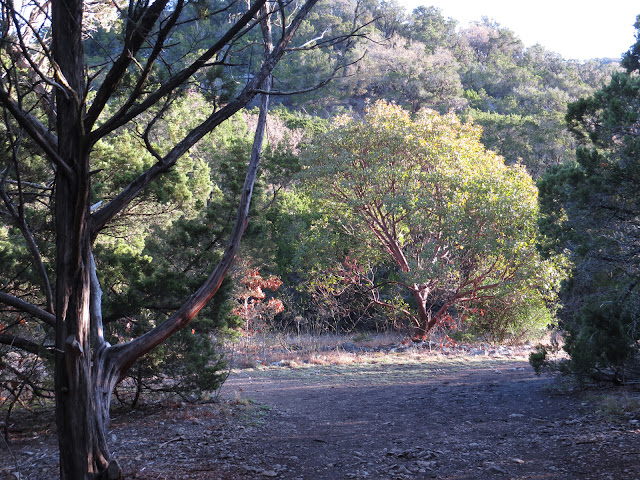 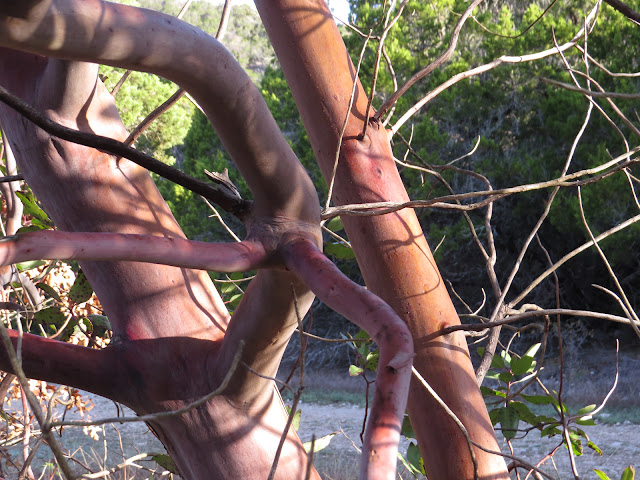 of one of the Madrone trees. 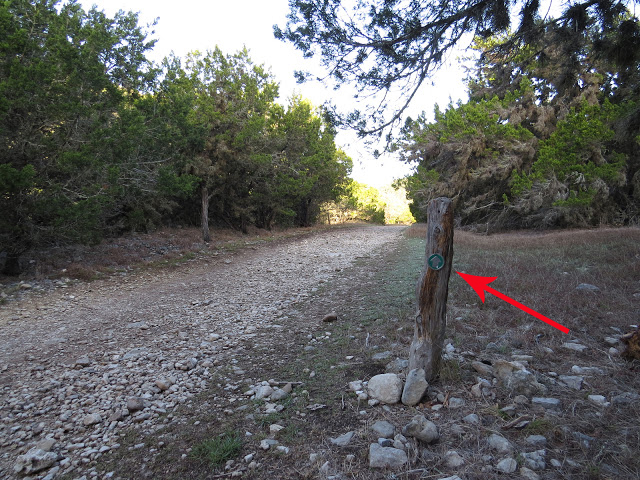 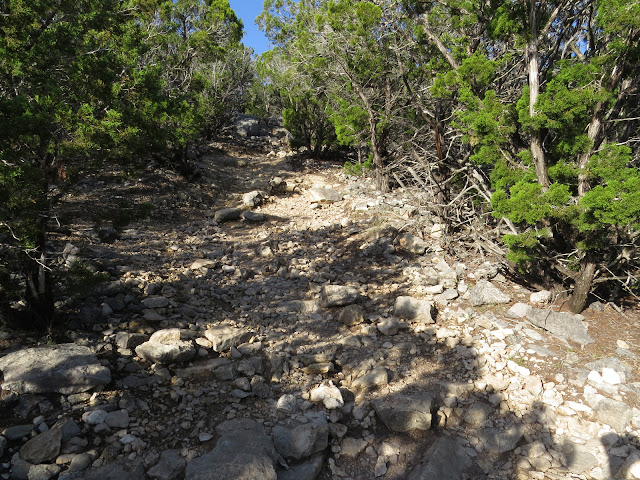 Having managed to stay on-trail with the help of superfluous blazes I worked my way through Primitive Camp A then past The Grotto to that slog up "the stairway" climb.

I know, not much in the way of "stairs" in this photo. Well I didn't think to take my camera out until I was above that part of the climb but still below the top. 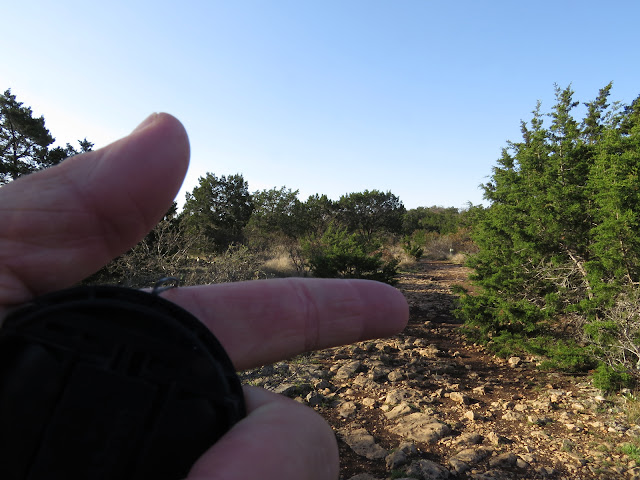 And once I was on top of the ridge, you see that Roadrunner?

She walked out onto the trail there where I'm pointing, took one look at me, and shot off so fast I swear her legs turned into little disks just like in the cartoon! Things like that could give a guy a complex about how ugly he is! 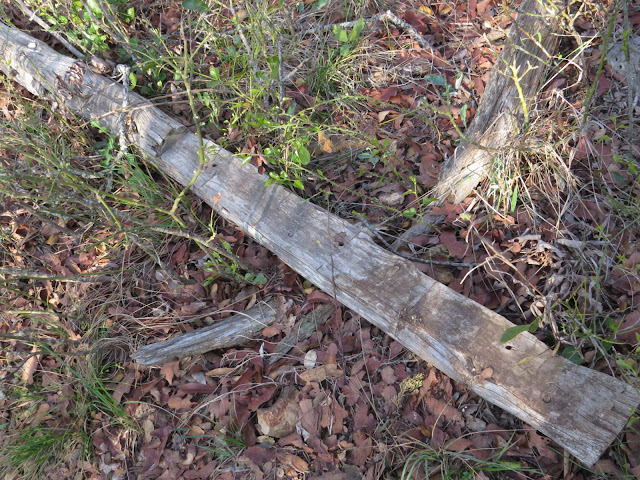 I've been by this spot many times over the years, but this is the first time I noticed this old post lying not far off the trail. It was clearly not just a fence-post but rather a sign support at one time. For a pretty big sign too, since that flat area the sign bolted to is a good three feet in length. 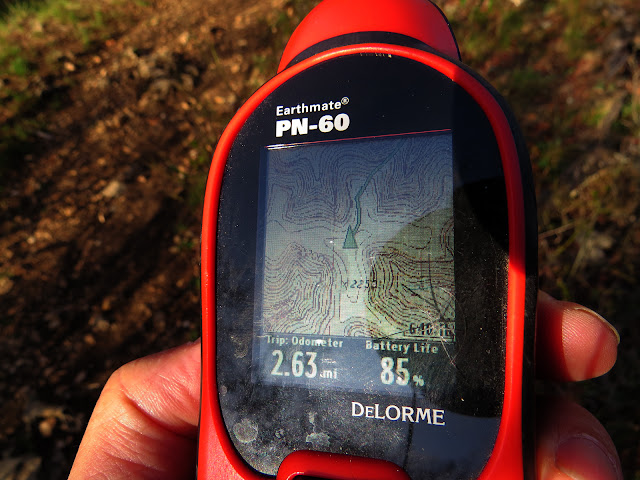 It is lying right at the confluence of an X-shaped set of ridges where the trail makes a sharp turn from North/South to East/West, but it does seem a little elaborate for a spot where there's nothing now but the trail itself. 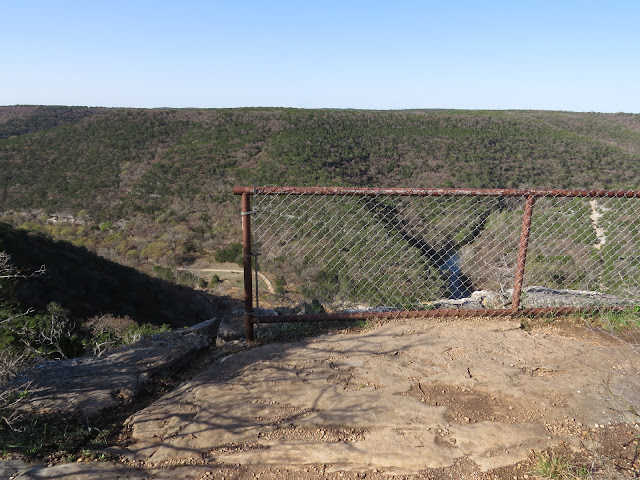 And I've never quite understood the thinking behind this short length of fence at the edge of a rock outcropping overlooking The Ponds below. (That Y shaped bit of blue behind the fence, though the left leg is shadow cast by the ridge and not actually water) 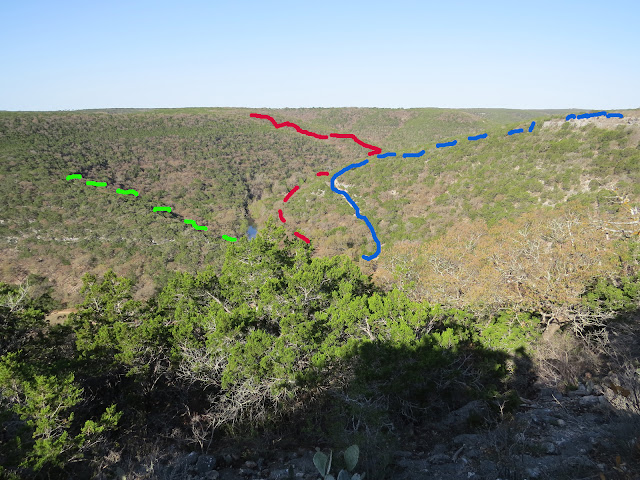 When I come down off this ridge (along the blue line) to The Ponds, instead of following Can Creek downstream (the green line) for just over a mile to The Van, I'm going to turn upstream for a while (the red line) then climb up the service road to the top of that next ridge over, putting The Van about 4 miles away - - -

Maybe, but what the hell, they're my bats!! 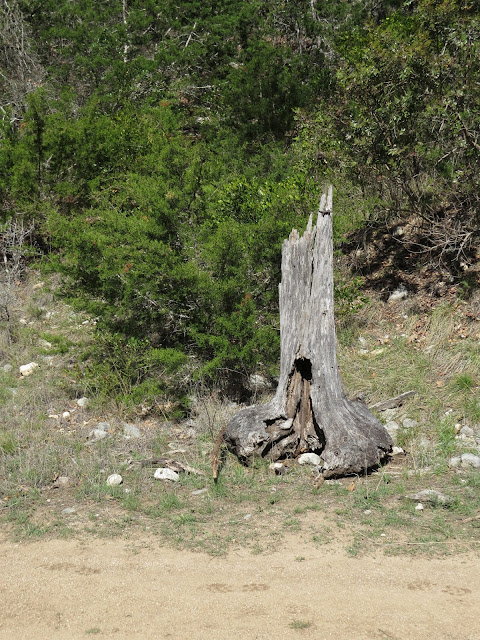 I didn't take this photo because of the implied rudeness of this stump, but because; if you look right near the top 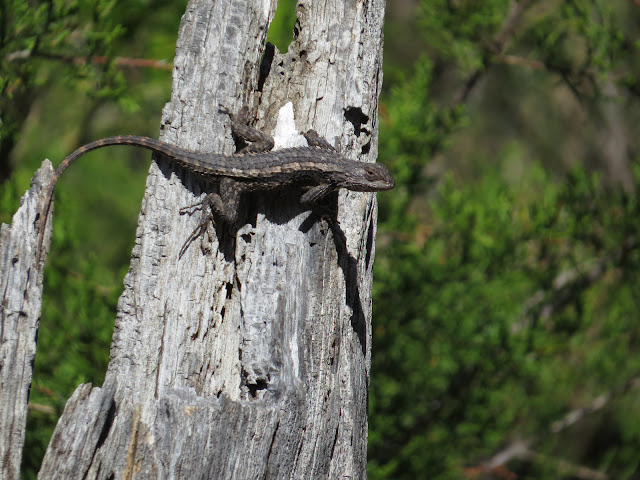 this guy is giving me the beady eye reserved for all bipedal, yet wingless creatures that disturb her nap. 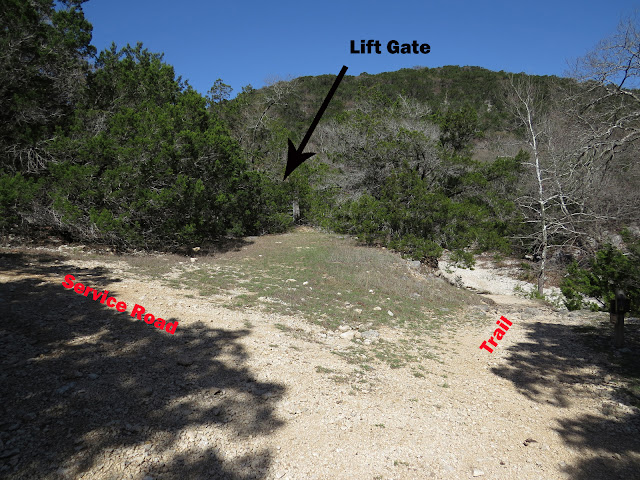 Here's where I leave the trail and start the climb up the service road to the top of yet another ridge.

I'll pick up the trail again at the composting toilet I've named Nirvana then start down the other side of the ridge towards the trailhead. 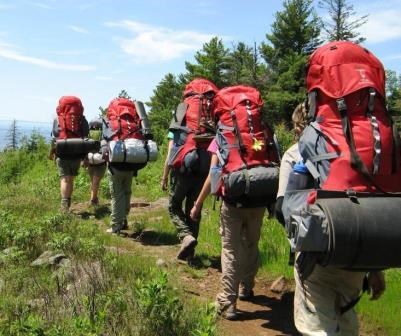 Once I finished up my hike and got back there I was kicked back in The Van with the doors open just enjoying the remains of the afternoon, because I'm only a little under two hours from the rest area where I'm going to spend the night and, as nice as that rest area is for a rest area, it's still a lot nicer here so I'm in no rush to leave, when a couple vehicles pulled up next to me.

Between the two, one a pickup, the other a large SUV, about a half dozen tween and young-teen boys and two adults piled out. I got the impression it was a scout or youth group of some sort.

Then, like a clown-car, they started pulling a mountain of equipment and supplies out of the vehicles as well, including backpacks bigger than some of the boys!

With much milling about and discussion, food was distributed among them, straps tightened and adjusted, doors slammed and locked, then opened again for some last minute forgotten item, then slammed and locked again.

Finally one of the men gathered everybody together, distributed paper maps, and gave the group a briefing on what their weekend, two-day, 10 mile, two different campsites, backpacking trip was going to look like.

He finished up by saying "Well we're running later than hoped so we better get moving." but one of the boys called out "Should we say something before we go?" They all thought that was a good idea, so hats were removed, heads bowed; and one of the boys, dwarfed under the pack on his back, said, in a strong, clear voice, "God, we thank you for getting us here today - and please let us live!"