It started off simply enough.

The Youpon (OK, why is it that spell checker doesn't know this word?? It's certainly more - well - genteel, than the proper name Ilex vomitoria! Which, to be fair, spell checker doesn't know either. . .) have had several years now to overtake, overgrow, and overwhelm the fence line alongside the upper section of the driveway. In fact, while still sufficient for the car, and even passable, with care, for The Van, there's no way could we get the travel trailer through there anymore.


After a few years hiatus, my father-in-law is once again showing an interest in having the trailer moved down to the coast so he can spend some time down there fishing. Don't know for a fact that it will happen, but it won't hurt to be prepared. Besides, if I let the Youpon go much longer it's going to be a real problem.

As it is right now, a large set of loppers will take care of most of it, with a pruning saw for the half dozen or so really large specimens.

I also need the tractor.

Youpon is really gnarly stuff, it's incredibly stiff, even the smallest branches, and grabs at everything. It's worse than coiled barbed wire. It's hard to handle, hard to drag through trees and underbrush, and even harder to stack, so rather than making habitat-rich brush piles with it, I cheat and feed the stuff through the chipper hanging off the back of the tractor. This turns it into neat little piles of - well - chips, that will break down and return to the soil quickly, especially after I spread the piles with the brush-hog during the late summer cutting.

Simple enough; 4 or 5 hours of cutting along the fence line and feeding the chipper, and the driveway was opened back up again (No photos since this part of the driveway is visible from the county road; if you stop, get out of your car and walk across the ditch to the gate; and I'm - well - to be frank, I can be a privacy freak at times.) But when it came time to put the tractor back in the barn, things got a little more complicated. 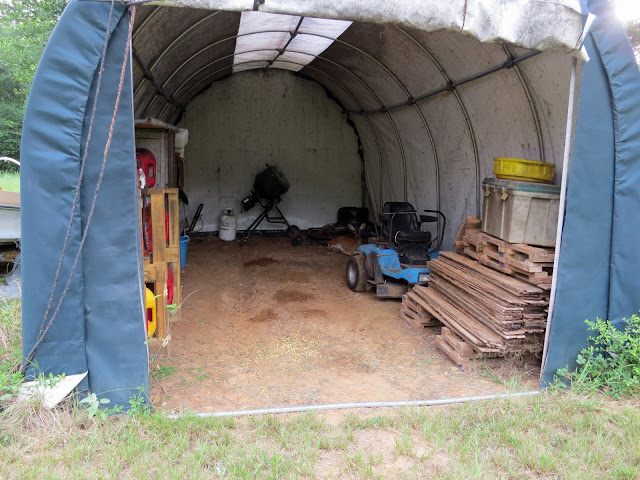 Apparently, while the tractor was away a squatter took up residence in it's barn. See her there, tucked in behind the mower on the right? 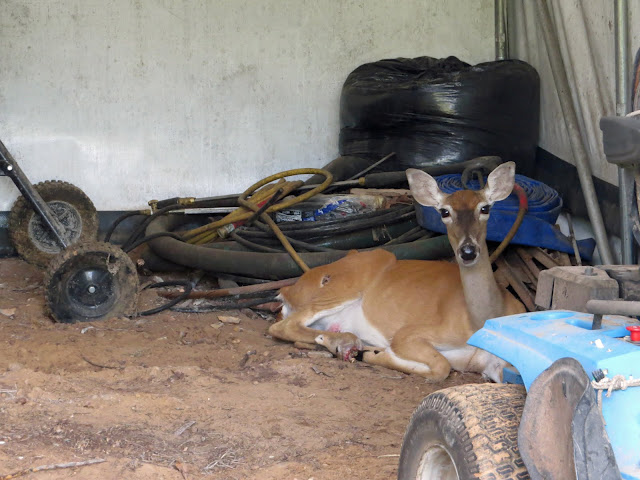 This little doe has been struggling around the property for the past couple days and once I was pretty much convinced she was going to die by morning while laying just outside our back door.

Life is harsh sometimes and it looks to me like she got tangled up with a coyote or two. Her bottom lip was mostly torn off, (It was hanging loose but has now fallen away.) she's got some serious puncture wounds, and by far the worst injury, her right rear foot is pretty much missing from somewhere between her 'wrist' and 'toes'. (Don't zoom in for a closeup of her foot! I did and still wish I hadn't. I've seen it often from the side, but this was the first time I'd seen it end on. Nasty!)

Now before anybody goes off half-cocked here, I'm the guy that live-traps field-mice and relocates them away from the barn, we keep a bug cup handy so we can capture insects that have wandered into our living quarters and move them outside without squishing them, my wife once had to drive 30 miles to the vet to have a desperately old and sick cat put down because I couldn't bring myself to do it. And if we called the game warden he would either shoot the doe himself or tell us to just leave it be.

So we did what the people at the animal rescue place have told us to in the past, leave a little corn out for her, make sure she has access to water and a place to get out of the weather, and just leave her be. Well apparently that little nest tucked up under the back of the travel trailer suited her just fine, but only until something better came along. 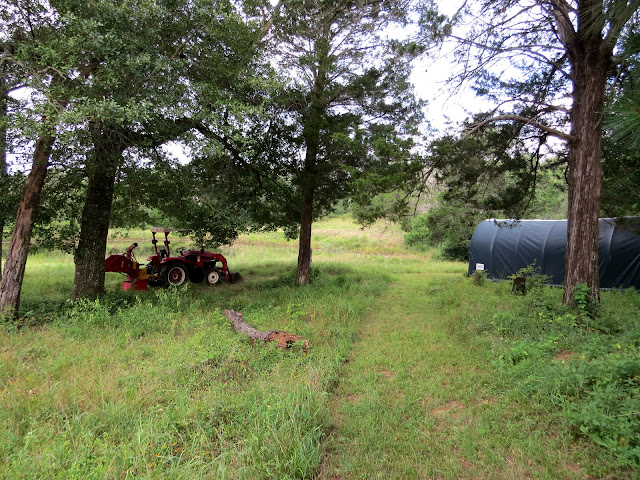 For now she's commandeered the barn for the duration, and in the meantime the tractor has to make do with a spot under the trees while I'm walking down to the barn several times a day to toss a fresh scoop of corn for her.

Animals can be remarkably resilient and a couple days ago she wasn't in the barn a few times when I went down. (But she returned.) Yesterday she was actually moving around the property quite a bit (Three legged.) and, though nothing but skin and bones, she was snatching browse and scarfing corn nearly as fast as I could toss it to her.

She wasn't down there in the barn this morning when I checked, but will probably be back once the day heats up. Maybe I'll be able to get the tractor back in the barn before the fall rains. . .