In my previous post I talked about visiting Starved Rock State Park.

As you might expect in such a heavily used park, one of the rules to abide by is to stay on the marked trails, off-trail hiking being forbidden both for safety and to protect the beleaguered ecology. This is a rule reinforced by many, many reminders along the way in the form of signs big and small. But considering the abundance of Poison Ivy I saw, especially down along the river, I would have thought the signs superfluous. 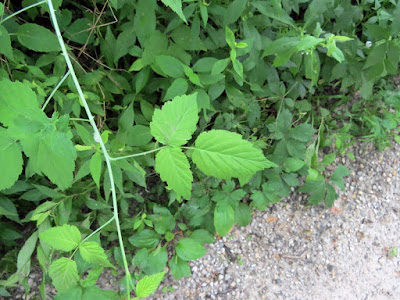 But then I'd be wrong; because anytime there's that many people in one spot, there's going to be candidates for the Wall Of Shame. (And I'm not even counting the gaggles of phone-engrossed, chattering teenage girls with ass-showing shorts, belly-cropped tops and the-world-is-mine attitudes that had to be negotiated as carefully as a street full of IED's as the crowds built on the trails there during the latter half of my hike.)

At first I thought my Wall Of Shame award was going to go to the two young men I judged to still be teenagers that had gone off-trail and were clearly lost. though only 30 yards from where I was standing, still on the trail. (Hey, don't laugh! It wasn't that long ago that a lone woman hiking the Appalachian trail got lost when she stepped off-trail to use a bush and ended up succumbing to exposure weeks later.)

I hike quietly and my sand colored hiking clothes sort of just blend in, besides, they were too busy panicking, darting a few steps in one direction then another, trying, unsuccessfully to figure out which direction they had come from, to notice me before I spoke up. (No! of course we're not lost they claimed as they crashed through the underbrush like a couple of barely guided tanks to where I was and took off up the trail at a near run. Dumbasses.)

But later I was witness to an even more egregious event which easily won the Wall Of Shame award. 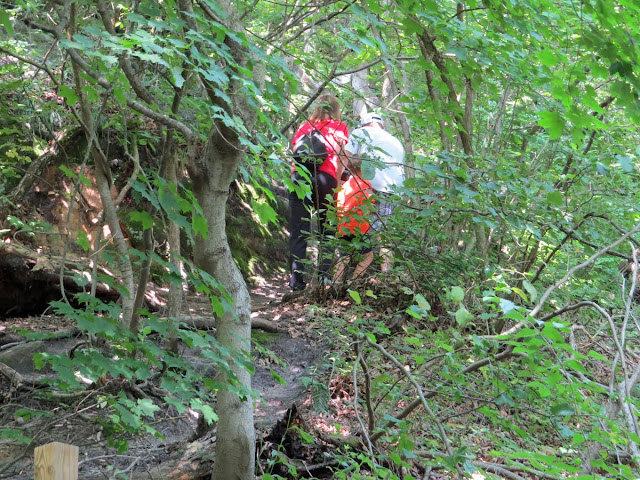 What you're looking at here is mom, dad and son. Or perhaps more accurately, Jackass, Timid follow-the-leader mouse and temporarily innocent.

The approved trail, the one the vast majority of people were courteous enough to stick to, is just there to the right of the photo. Having been there, carefully picking my way down that steep section of trail at the time, I know that it was dad that decided the rules, along with any form of common sense, don't apply to his little family group, and it wasn't a case of the kid darting off uncontrollably as kids are wont to do. It was dad that deliberately decided to drag his little family group off on a macho adventure, stomping and slipping and crushing their way up the fragile slope.

Considering that the top of that post you see in the bottom left corner, the post they had to squeeze around to get where they are, is holding up one of those Not A Trail signs, just what the heck does this duffus think he's teaching his kid????