Southeast Michigan is a weird place.

OK, hear me out on this.

When I was a kid; yep, way back in the 50's, the middle of the last century, the dark ages; the population of Detroit was just shy of 2 million people, the fourth largest city in the country, yet where I grew up, a town about 30 miles from the city center, the surroundings were rural with a scattering of villages.

As Scouts, we would hike the gravel shoulders of the two-lane roads connecting those villages with full packs, racking up the miles for our next merit badge or to qualify for a Jamboree. There was maybe three named freeways in and around Detroit at the time, (Why the insistence on names instead of the official number designations I still don't know, Don't they get that that does nothing but confuse the visitor trying to make sense of the morning radio traffic report?!) we bought today's harvest of sweet corn from the stands alongside the fields that corn grew in, we dragged our sleds down the road and up the hill (And up the hill and up the hill ad nausiem.) adjacent to a nearby farm.

Today the population of Detroit is less than 1/3rd what it was back then, not much over a half million, officially smaller than the isolated border town of El Paso. And yet all those little villages within a 30 mile, actually more like 40 mile, radius of the city have grown to the point where they basically form one vast interconnected mass of development. A carpet, a shag carpet, of humanity.

The gravel shoulders we hiked for our merit badges are gone, buried beneath divided four-lane highways. The cornfields have been taken over by endless subdivisions of McMansions (Just who the heck can afford to buy all those massive houses anyway?!!), our sledding hill has been flattened and is now underneath one of the many new freeways, ring roads, spurs and expressways that still aren't enough to handle the unbelievable crush of cars trying to get from one place to another.

But one thing that southeast Michigan does have is State Recreation Areas and Metropolitan Parks. And a common denominator threading it's way through many of them is the Huron River. 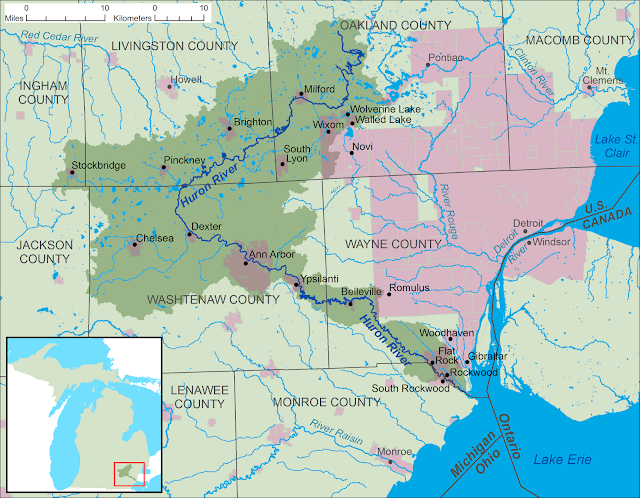 Starting somewhere along the collective drainage's of Pontiac, Union, Green, Long, and Straits (Upper, Middle and Lower, where Grandma had a house.) Lakes about 30 miles northeast of Detroit, the Huron River winds it's way in a an arch around the city. Though Commerce where I went to kindergarten and first grade, down Proud Lake, through Milford and into Kent Lake, centerpiece of one of the largest Metropolitan parks even to this day. (It's been around since 1947.)  From here the river takes a little westward bump out to about 45 miles from the city, touching on Whitewood, Base Line and Portage Lakes before curving back through Ann Arbor, Ypsilanti and Willow Run, then on down Ford and Belleville Lakes, before it makes a final run, skirting around the southern edge of the Detroit metropolitan area, into Lake Erie.

Along the way you'll find, among others, Pontiac, Highland, Proud Lake, Island Lake, Brighton, and Pinchney State Recreation Areas. Along with an assortment of metro and community parks.

For all it's faults, when I was but a kid the state had already embarked on an aggressive program of saving wilderness, especially wetland, areas, and today every kid in Southeast Michigan has probably been on a school or scout or family trip to somewhere along the Huron river. The school district where I spent grades 2 - 12 even has it's own Outdoor Education Center located there along the riverway, along with an assortment of scout, private, and community camps and centers.

I bring all this up because I spent a day on the Huron River this trip.

My sisters, who I suspect were feeling sorry for me after making such a long trip for an afternoon get-together, took that Monday off, (And if you know the nature of one of my sister's jobs you would understand just how much of a commitment this was for her.) and the three of us went kayaking.

Since most of the land along the river is under the auspices of the state Department of Natural Resources, it requires a Recreation Pass to be on it. If you are a resident this is an $11 sticker added to your vehicle registration. If you are a non-resident it is a $9 daily fee.


The Huron is no Snake River adventure, or even Rifle River (Farther north in Michigan and a favorite when we were scouts.) float trip. Instead the Huron river cuts through largely flat lands and it's pretty shallow most the way. But the good new is, (Must remember the theme of this trip!!) this does allow for the option of self-return trips where you paddle out from the livery or launch and right back to the same place at the end of the day, which is what we chose to do. 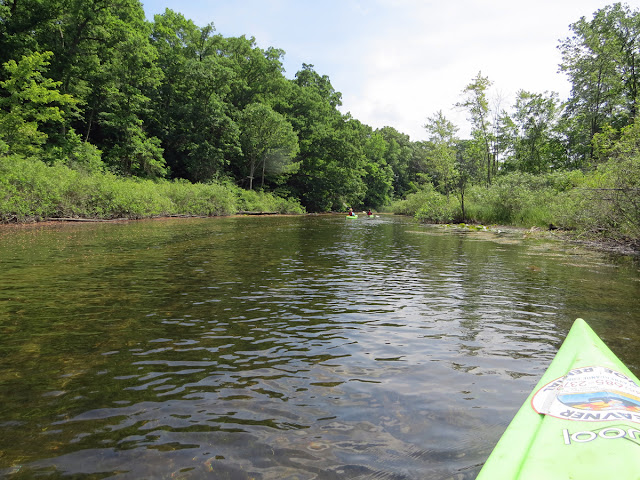 At this point we are less than a half mile from a road to the north and just one mile from several subdivisions to the south, yet the foresight of conservationists and state officials have ensured the river and surrounding wetlands stay pretty natural and relatively untouched. 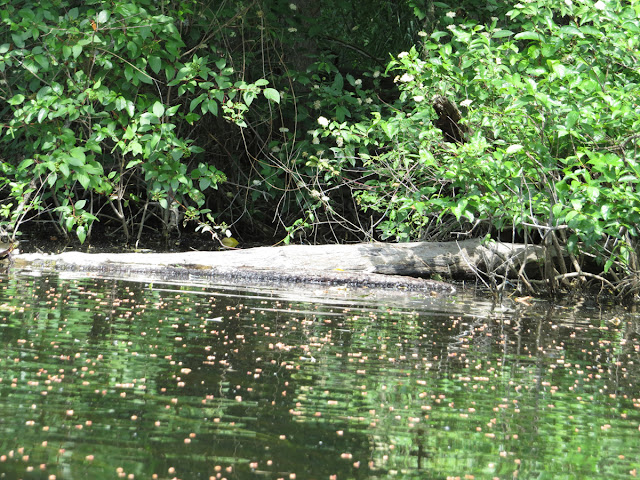 There was a big-ass turtle right there on that log! I swear it was there!! . . . Sigh. . . Sure wish I could afford a waterproof camera. It takes far too long to extract my camera out of the dry-bag. . . 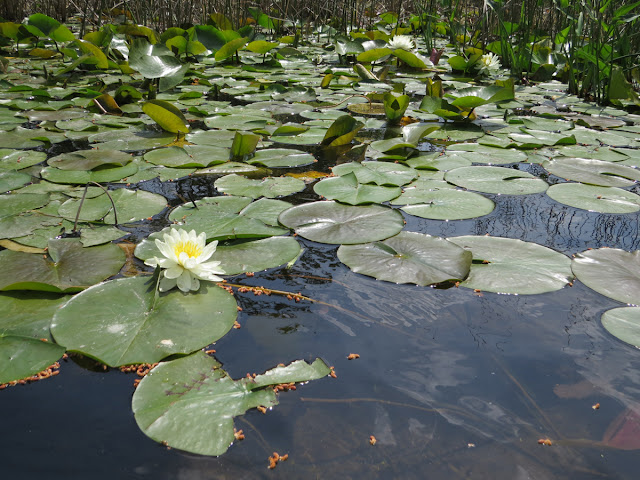 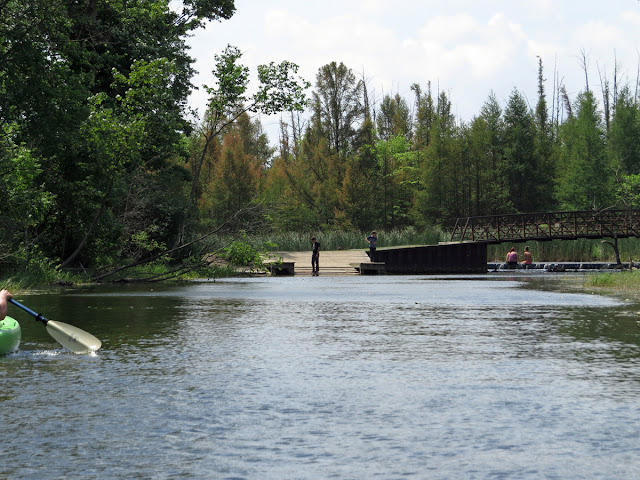 Eventually we spot our lunch stop. The landing at the lower end of Proud Lake.

That little black line under the bridge to the right is the 'dam' forming the lake. At 12 to 18 inches high, it's clear that this is flat land and slow water. We pulled out at the landing near the center of the photo then crossed the bridge with our lunches and seat cushions in hand. 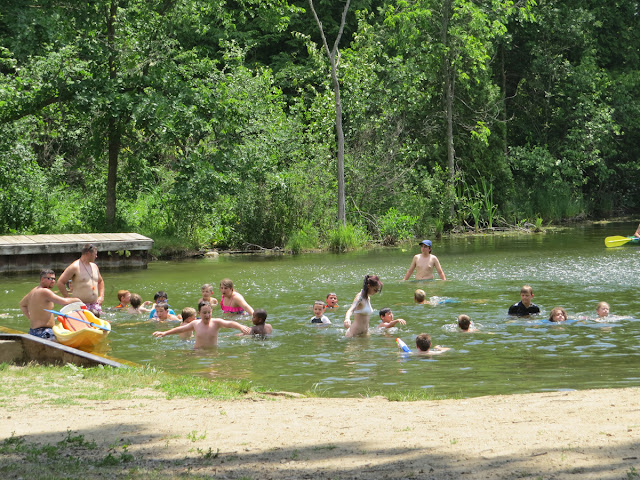 While we were still on the river approaching the landing there was a troop of kids on one of the trails nearby. We couldn't see them but we knew they were there because their councilors were leading them in a robust chant, I suppose because it's easier to keep track of them that way.

Shortly after we settled down for lunch a troop, maybe the same one, came stomping and chattering across the bridge and settled in at the small beach in front of us. After a group safety meeting, pairing off into buddies and a swim test, where each kid had to swim out to the councilor in the blue hat, the horde was turned loose.

Yes it was noisy and disruptive, but I suppose the next crop of screwed up, debt ridden, angst filled adults has to come from somewhere. Besides, long ago I was one of those kids, so I couldn't really begrudge them the experience. And kudos to those grossly underpaid, under appreciated councilors. I'm glad there's people like that out there for the kids. I know I would never survive the job. (What do you mean I'm not allowed to use the dog kennel to control that kid??!!! It is one of the larger ones and you got to admit that kid is really annoying!) 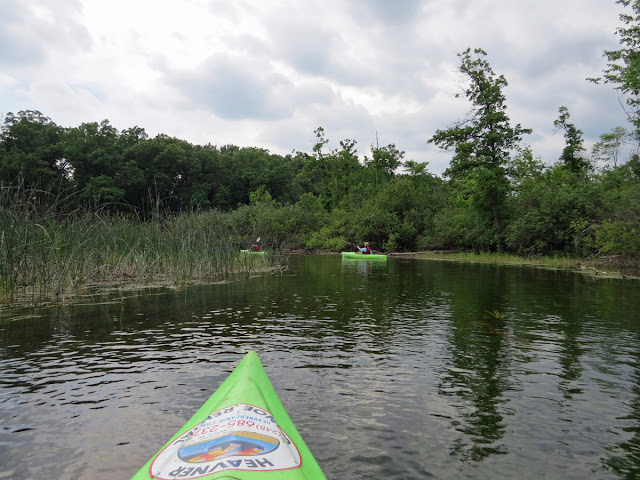 After lunch (Fancy store bought subs instead of the PBandJ on white-bread of our youth. Ahh how we've grown.) we had the option of dragging the kayaks over the dam and paddling on up into Proud Lake before turning around, or just pushing off and floating back towards our takeout. Being at the age of leisure rather than point-to-prove, we opted for the easy float.