A Plethora of Critters 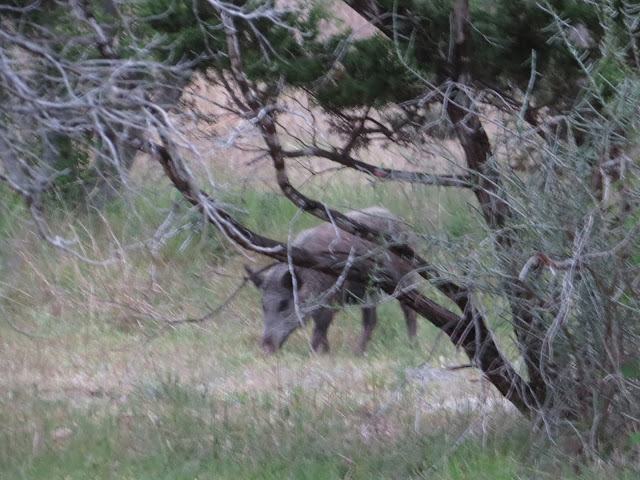 One moonless night at Pedernales Falls State Park I was standing out behind The Van watching the sky and otherwise not doing much of anything when I heard something off to my right sort of moaning.  I couldn't see a thing but got the impression that whatever it was was nosing along the ground as it moved across in front of me on the other side of a tree, rhythmicly moaning the whole time.

It was feeding like an armadillo but I’ve never heard anything other than rustling and an occasional hiss from an armadillo. It could have been a feral hog, such as the one I spotted nearby during daylight hours, but they tend to grunt, and if they are in a group, squeal occasionally.

I pulled the headlamp I was carrying out of my pocket and clicked on the red light, but there was too much brush between me and whatever it was to get a glimpse of it. But as I was trying a Bobcat trotted through the little pool of light around me just as casual as could be, not more than 5 feet from where I was standing.

As far as I know that's the closest I've been to one in the wild. 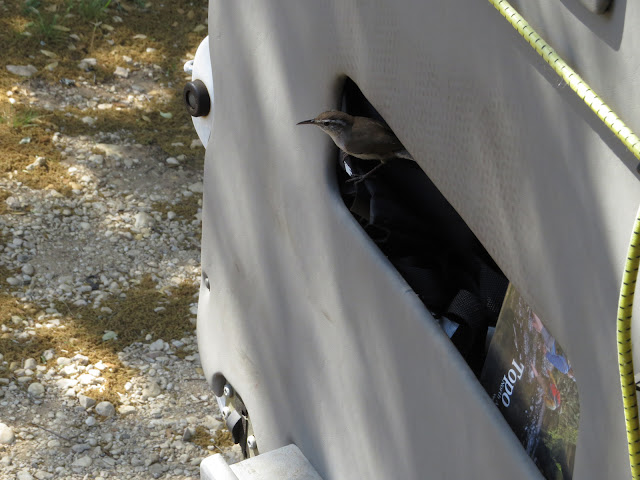 The previous afternoon I was sitting out in my camp chair a fair distance behind The Van which I had all opened up to stay cool when I noticed a small bird flitting around the back doors. I had no binoculars nor camera-zoom to get a better look so curiosity eventually forced me to get up. My plan was to get my camera, go back to my chair, and let things settle down again, but I didn’t have to go to all that trouble.

The Carolina Wren didn’t seem to mind that I was standing right there. 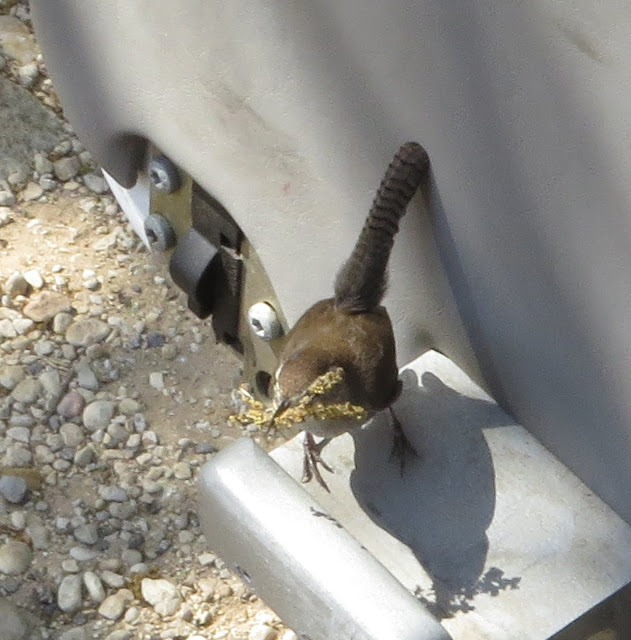 It just kept on keeping on. Flitting off to nearby vegetation, bringing a little bit back with it, then jumping up into the door-pocket where it would disappear behind the case of TOPO CD’s I keep with me just in case I ever go east and need to load new maps into my GPS. 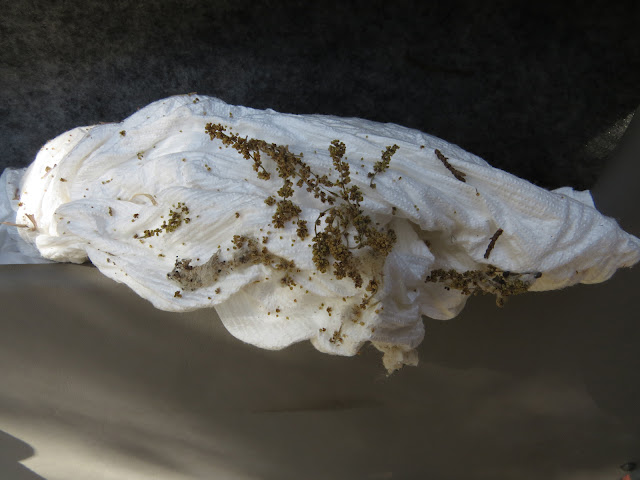 I figured that this behavior, though pretty neat, wasn't at all productive for the little avian workhorse and I was right. When I removed the CD case I found the beginnings of an ill-fated nest  clinging to the Tyvek suit I also keep tucked into this door-pocket. 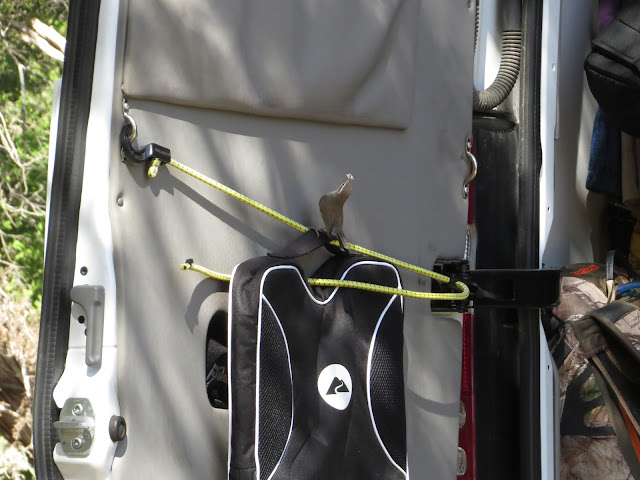 Normally my folding camp-table blocks this part of the door but I was using that so after I cleaned up the burgeoning nest I hung a cushion I wasn't using across the opening in the hopes that would deter the little wren so it would then put its efforts towards a more realistic nest location.

This seemed to work, though not for lack of trying on the part 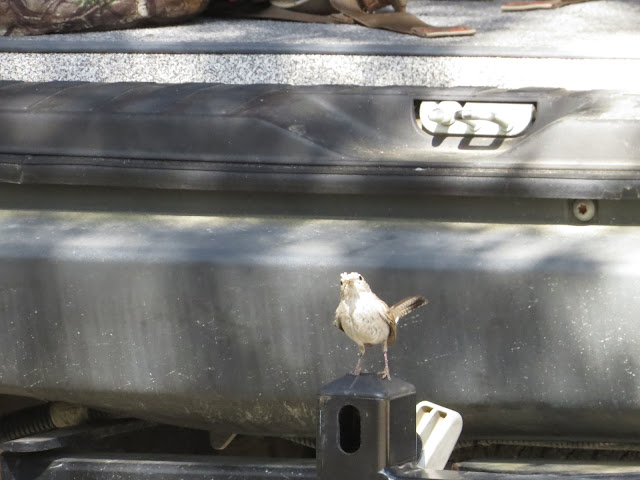 of the determined, and slightly pissed off, bird.

So I went back to my book feeling all warm and fuzzy about keeping the local wild-life from making a mistake.

Except that later I looked up and noticed continued activity around the back of The Van. Activity that seemed to be centered on the two camera bags and one water-tote I have hanging just inside the rear door. 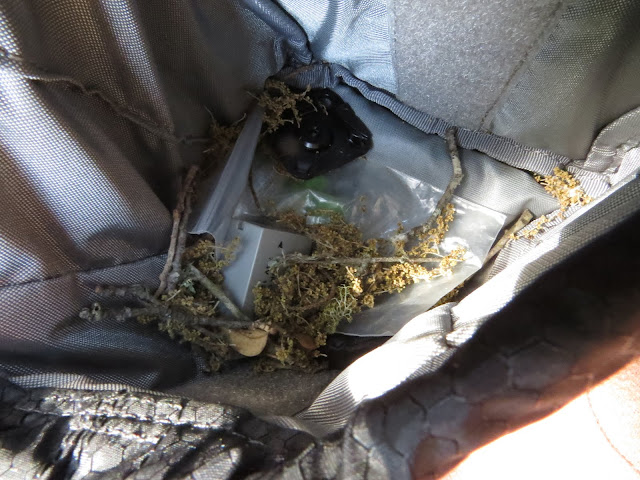 sure enough, we had another nest underway. . .

I emptied all the batteries and chargers from the bag, shook out the nest material, closed up the cover more securely, and sat back to see what the wren would pick on next. 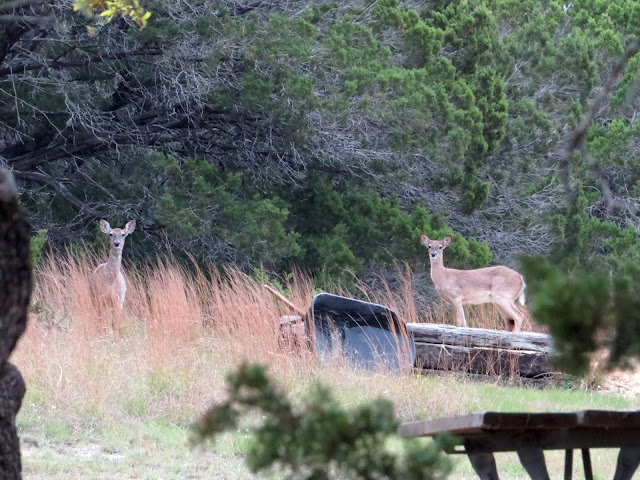 The next day, mid-hike, I had to negotiate with these two for space at Polly's Horse Camp. 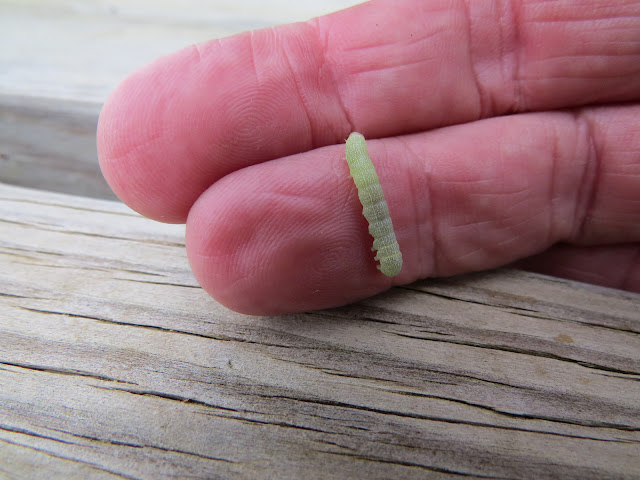 I don’t know where this guy hitched on, but as I took a break at one of the tables there at the Horse Camp he was bungee jumping off my hat-brim there in front of my eyes. Made it kind of hard to concentrate - not that I had anything to concentrate on at the moment. 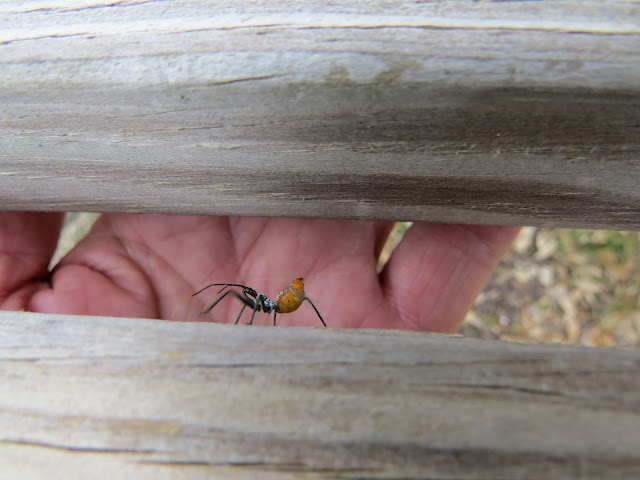 Then a couple minutes later this guy ran quickly up to my arm, made a hard left, then tried to dive between the table-top boards.

I don’t know what this is, nor if that is its normal abdomen or if it might by carrying a clutch of eggs under there, but I didn’t want to disturb it for any longer than it took to snap this photo. 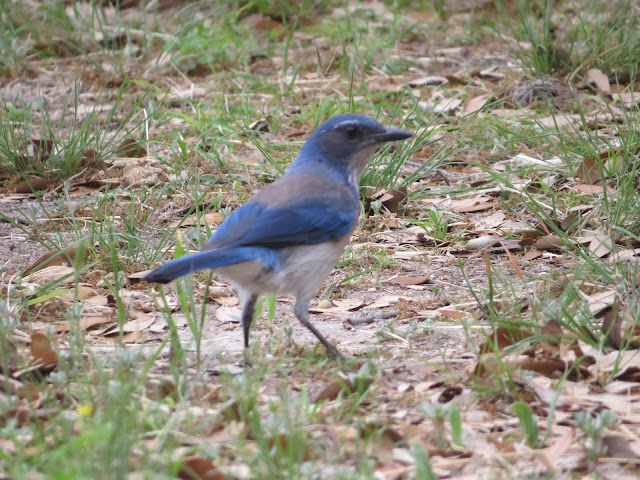 Later, while still sitting there at that weathered and splintery table trying to mind my own business it suddenly sounded like I was in the middle of a New York tenement street filled with squabbling neighbors as a pair of Crested Titmouse objected to sharing their tree with this Scrub Jay who, even though trying to look casual about the whole thing, eventually relinquished the tree and settled for the ground. 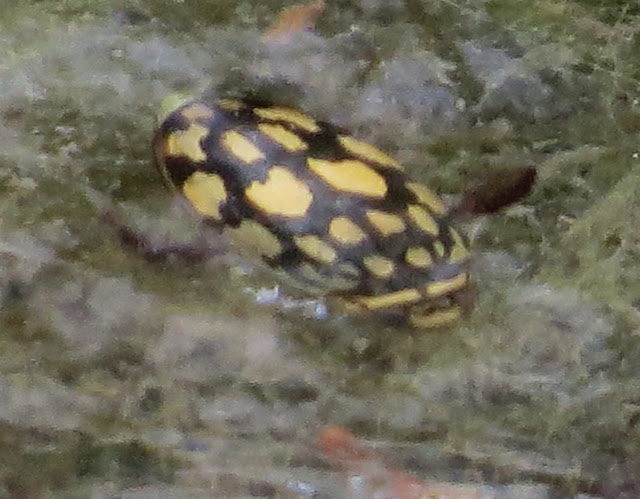 A few hours further on I was sitting at Jones Spring watching this guy lord over the little pool there. The image is grainy because every time I moved closer it would disappear into the bottom of the pool so I had to resort to extreme zoom to get this image of the creature which is smaller than my little finger nail.

Initially, because of the coloration I thought it might be a tiny little turtle, but eventually I caught a glimpse of the pair of oar-like legs that are the hallmark of a water-bug.