Madrone In The Morning 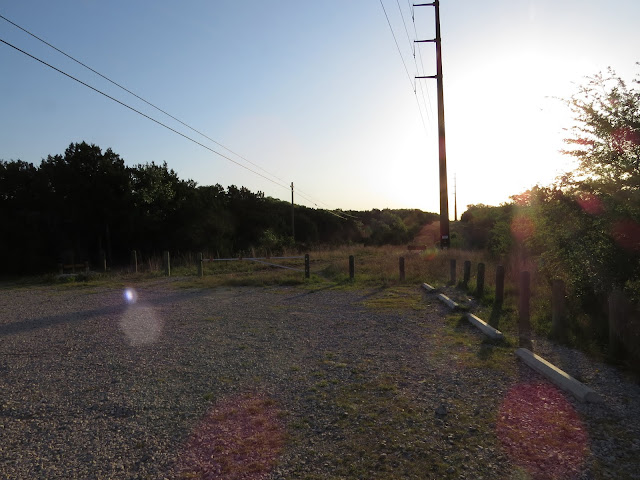 Not exactly what I would call a pretty trailhead, even in the flattering light of early morning, 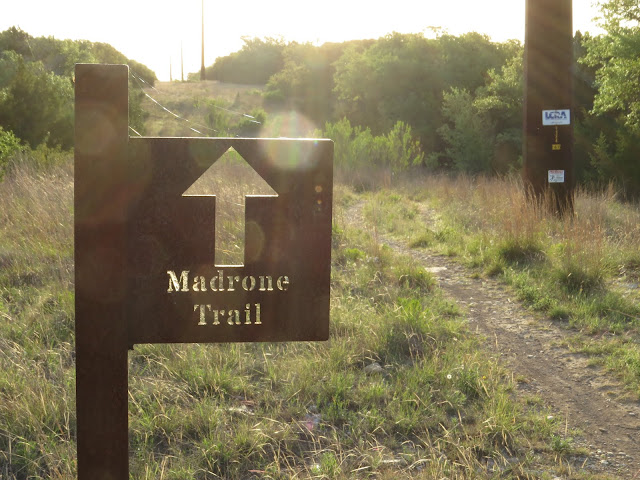 but it is what it is. 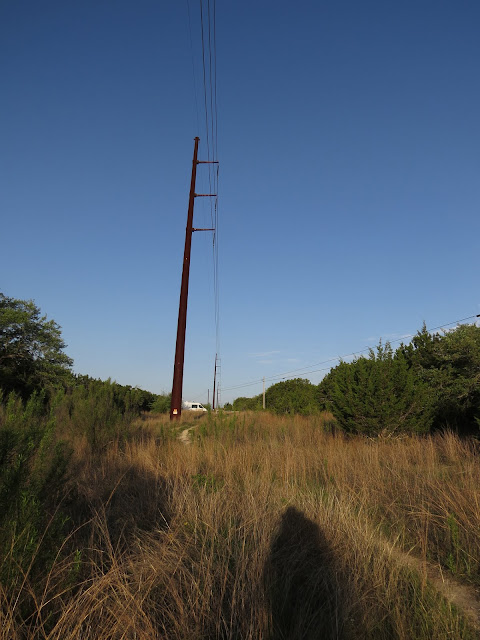 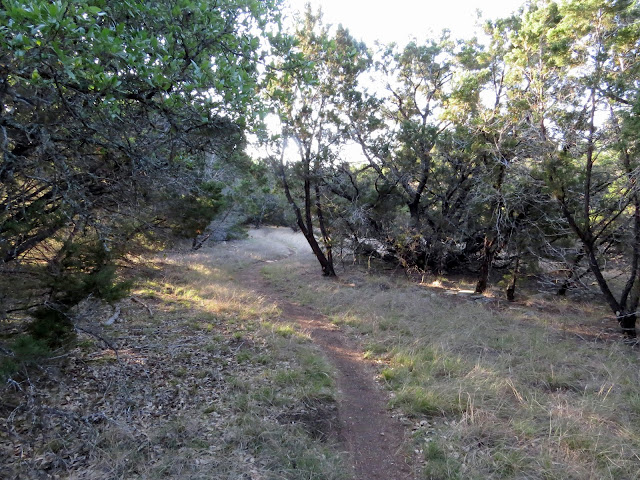 making a sharp right into far more pleasant environs, although most anything is more pleasant than hanging around under those humming, snapping power lines which conjure up images of a bug creeping along under the imminent threat of a bug-zapper. 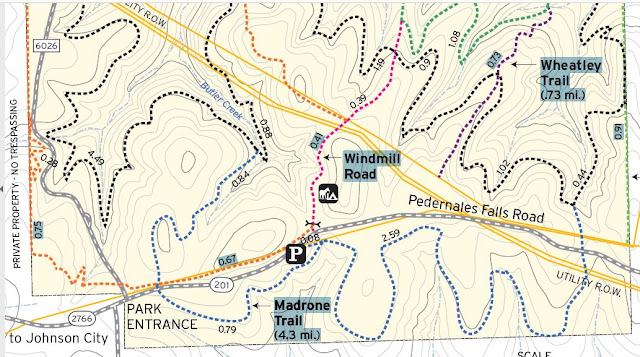 The 4.5 mile Madrone trail is mostly contained in a little slice of Pedernales Falls State Park that is on the south side of CR-201 and for the most part is, for the area, a relatively flat hike among Juniper with a healthy scattering of hardwoods for variety. 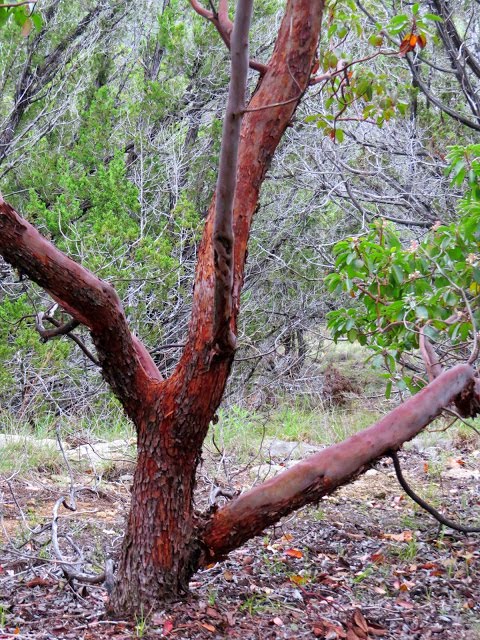 The trail is named for the Madrone trees which put in a few rare appearances here at the southern end of the park. As can be seen in the photo above the bark of the Madrone is often a distinctive red and, unlike many trees, doesn’t grow with the tree but is shed in long flakes to reveal the next, fresh smooth layer.

I know there’s at least one larger specimen along this trail because I’ve seen it before, in fact the image above comes from a 2015 hike on this trail, 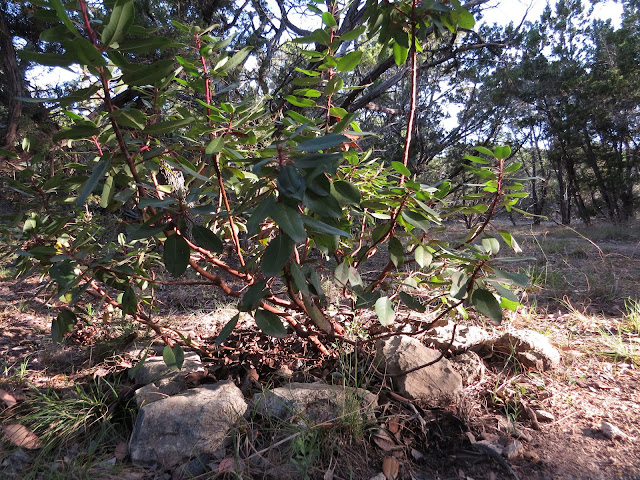 but today the best I could come up with was this seedling protected by a ring of stones as it struggles to survive right at the edge of the trail.

The seeds are barbed so it’s not unreasonable to expect that a few years ago this one hitched a temporary ride to this spot on a hiker’s pant-leg. Maybe even mine! 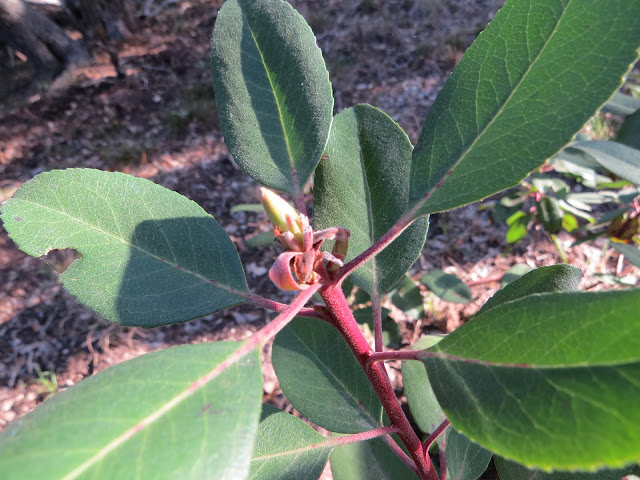 With a little luck maybe this one will survive long enough to one day be classified as a tree. 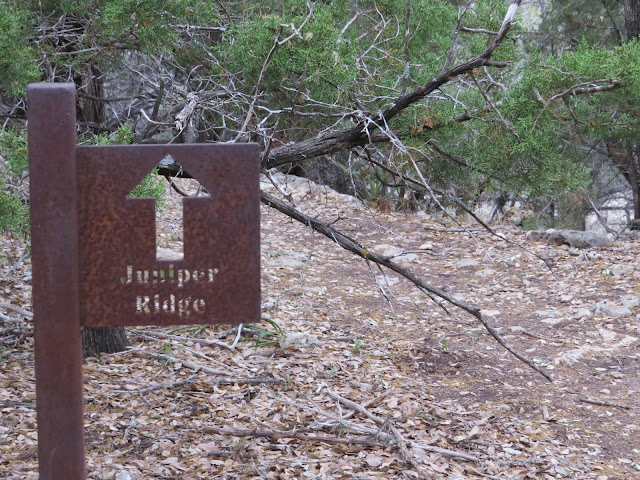 The Madrone Trail is not in itself a loop, but by piecing it together with parts of the Juniper Ridge Trail it can be turned into one. 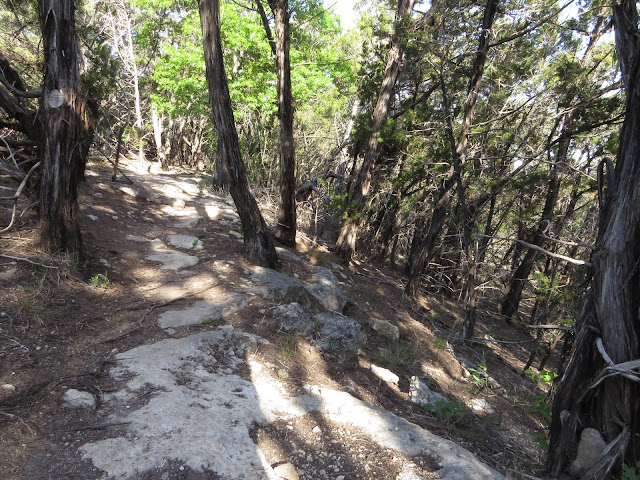 Though like the Madrone, the Juniper Ridge Trail has a minimum of vertical challenges, it crosses distinctly more pitched and rocky terrain than Madrone. Juniper Ridge was designed and built by a mountain bike club out of Austin and it shows. 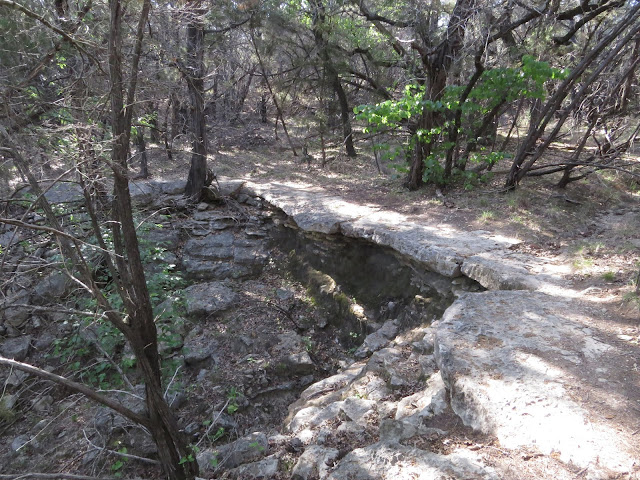 Rather than backing off into the easier ground a few feet away, the Juniper Ridge Trail clings right to the rocky edge of a number of ravines as it zig-zags across the  park for over 9 miles, sometimes just barely clinging to the edge of drop-offs.

Given my skills, or rather lack of, as a mountain-biker you won’t catch me riding it, but as a hike it's actually pretty good. 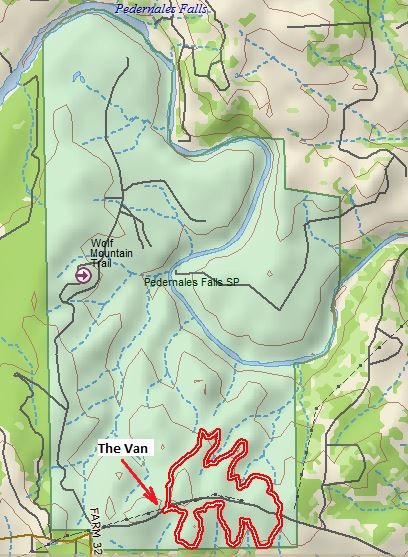 Using the Madrone and Juniper Ridge, I could have created an 8 mile loop that traverses most of the southern end of the park, as I have in the past, but I was actually supposed to be heading home to chores rather than out here hiking today, so I used a piece of the Windmill Road to cut things down to a 5 hour, five and a half mile bit of procrastination instead.