Not Much Water In The Falls 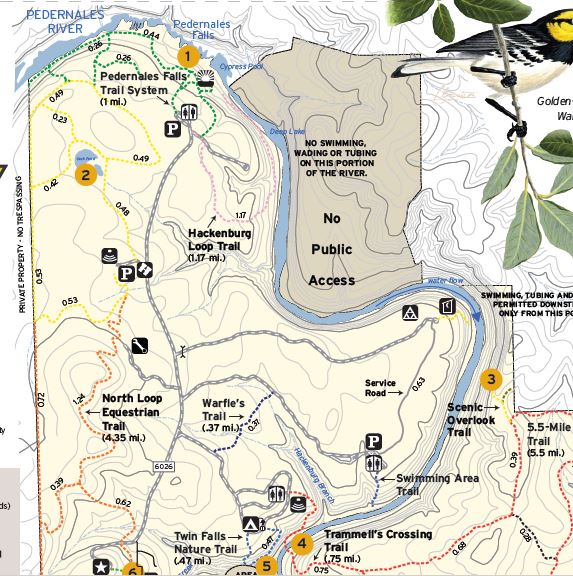 At the far northern end of Pedernales Falls State Park is the park’s namesake, Pedernales Falls. This is a stretch of river that flows over a tilted uplift of the area’s underlying limestone that creates more a series of pools flowing down into each other than traditional falls, but in this dry country you take what you can get!

This is also the most popular part of the park and, because I’m – well, just naturally persnickety, it's an area of the park that I visit infrequently. 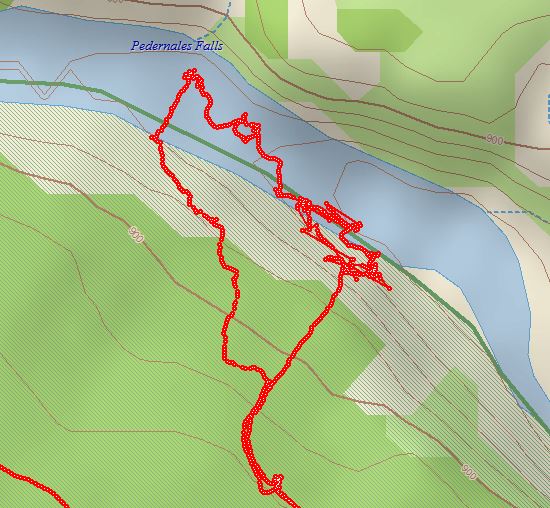 But early this morning I set out for a hike/bike day and made an exception by turning right as I exit the campground.

The hike part of hike/bike is necessary at this end of the park since bikes are not allowed down by the falls area. Which is why I tucked the Quad-B into the trees right about where the little knot in my trail is at the bottom-center of the image above and continued on foot. 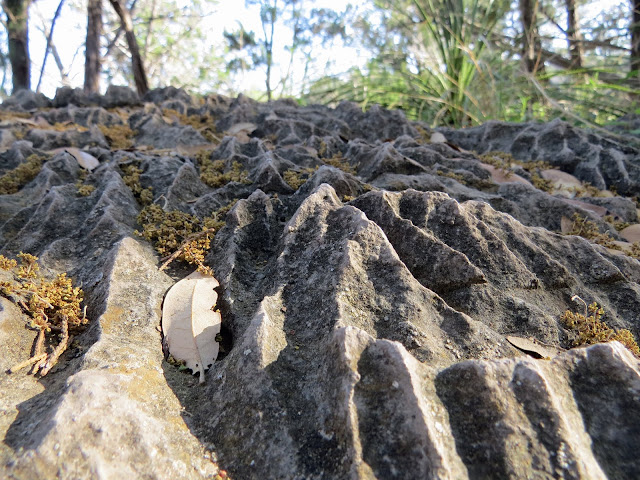 Rather than hike straight down to the river (there’s that persnickety bit again!) I soon left the trail and headed northwestward for a bit, angling to come out slightly upriver of the falls area.

Limestone and water can create some interesting formations, including this miniature mountain-range. 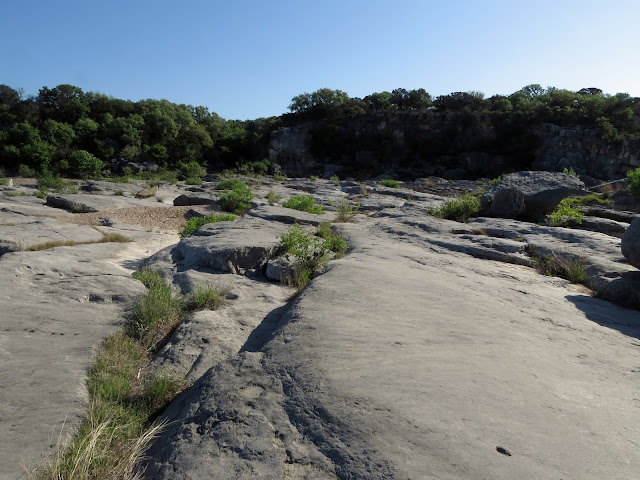 In this image the limestone formation is tilted upwards from right to left and the river flows against that tilt left to right.

Right now the water levels are low and the river is tucked out of sight in a channel under the bluffs over there, but in wetter times everything in front of me can be under water. 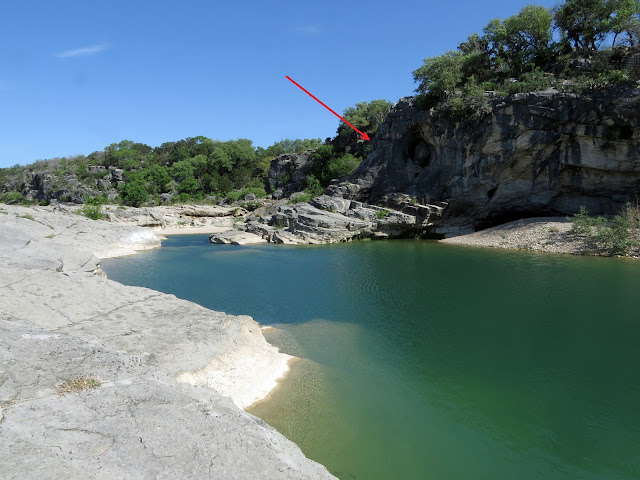 But wetter times are few and far between around here so water is precious.

To the left is park property but on the right side of the channel is private land. On the top of the bluff, not really visible behind the trees unless you know it’s there, is a 30 to 50 thousand gallon concrete water tank and just at the end of the arrow is a pipe dangling over the bluff and heading down towards the river.

There’s an eddy tucked in there behind that point of the bluff and the end of that pipe is used to suck water up out of the river and into the tank. 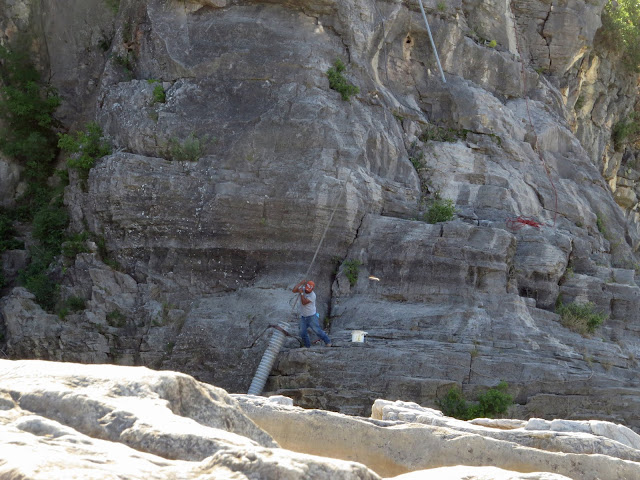 Or at least that’s usually the case, but at the moment the pipe to the tank is dangling loose up there in the top of the image and a pair of ranch-hands are making some improvements/repairs to the system. (notice the red rope on the far right that they are using, hand-over-hand with no other safety gear, to scale the bluff to get at this hard-to-access spot.) 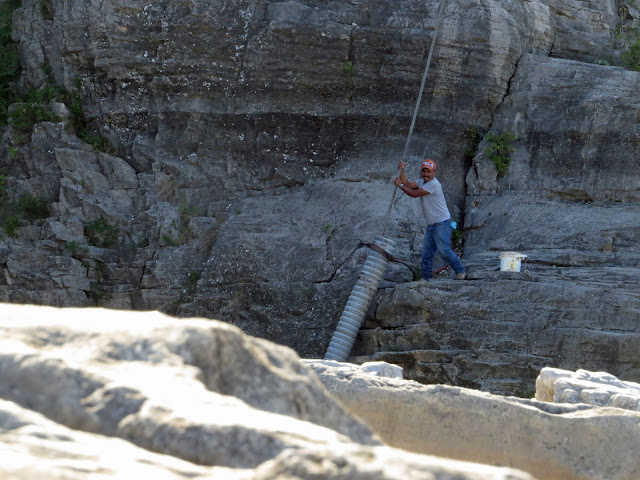 The river is still about 20 feet below this guy’s feet and his co-worker is about midway between banging on the side of that sand-filled culvert with a big-ass sledge as the visible guy rams the pipe up and down over and over, gaining an inch or so at a time. 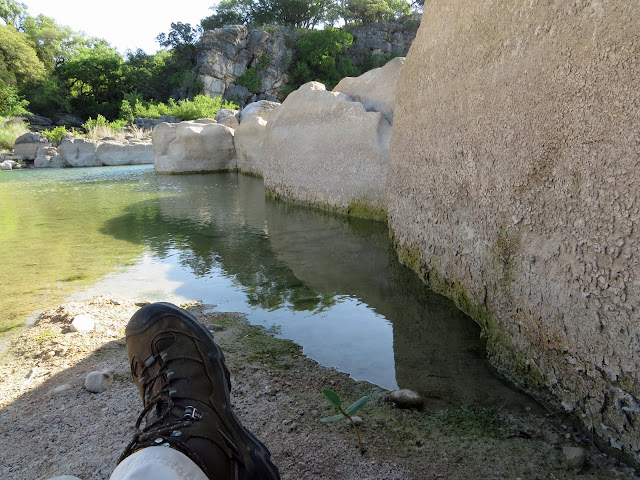 I, working hard to tamp down any empathy I have for the hard-working men, move up-river a bit and take advantage of the low water levels to find a spot to just lay back and chill, the rhythmic thunk – thunk – thunk of the ranch-hands labors just loud enough from here to lull me into a stupor. 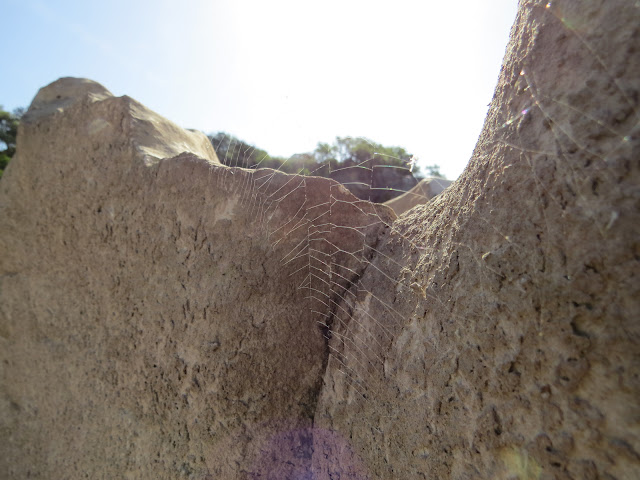 But only until the sun eventually intrudes on my little hide-a-way.

Growing up in cloud-shrouded Michigan which clocks an average of 75 sunny days a year we sought out the sun, taking advantage of its handful of summer appearances to stretch out on sandy towels and let it bake our lily-white Irish skin to a golden brown, (we didn’t know squat about UV damage back then) but when I moved to Texas with closer to 220 sunny days, and more tropical temperatures, I quickly learned to appreciate shade, and when it’s gone it’s time to move, even in late April. 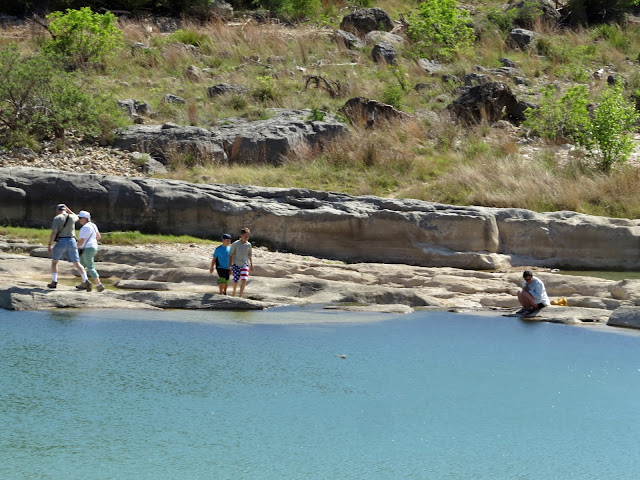 Besides, people are starting to show up, and frankly people are not my favorite people.

And here is an example of why. Despite ample signage on the trail down from the parking lot explaining Texas property laws, the four people on the left have, without hesitation, jumped the channel and are now trespassing on private property. I wonder how they’d feel if I just walked in their front door during lunch??

The poor ranger stationed down here is supposed to be for interpretive purposes, but when the water is this low he/she has to spend a good half their time chasing the stupid back across the river before a gun-totin’, pissed off rancher, 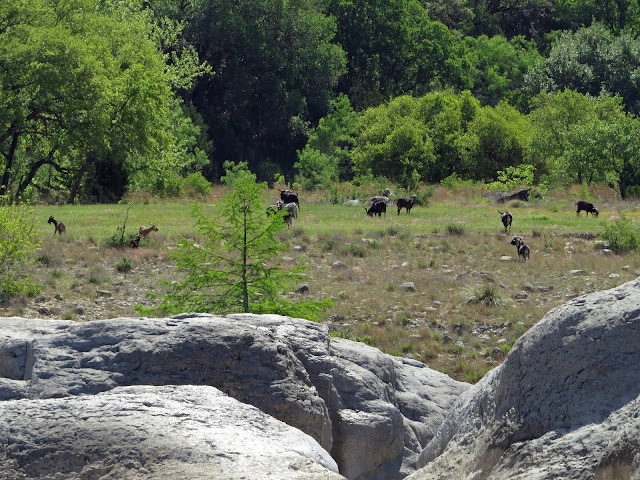 who’s goats, on which he will barely break even as it is, are trying to graze undisturbed, turns up and resolves the issue himself.