Down By The River 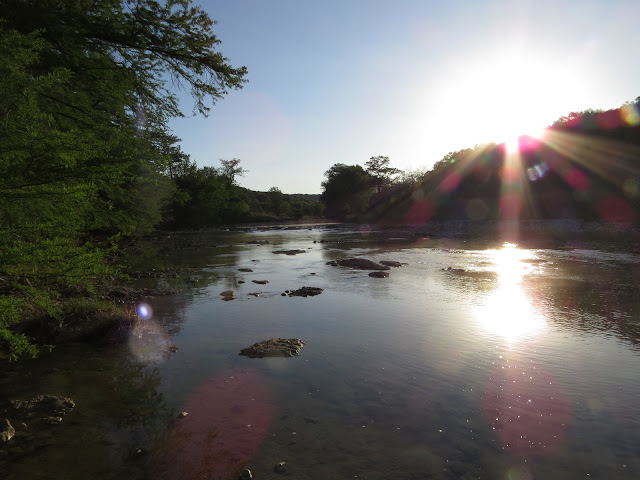 Upriver the sun has peeked over the bluffs. 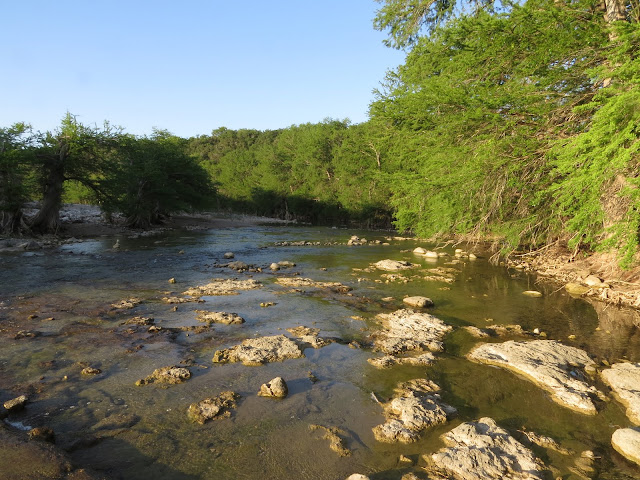 Downriver the shadows are quickly giving way to golden rays. 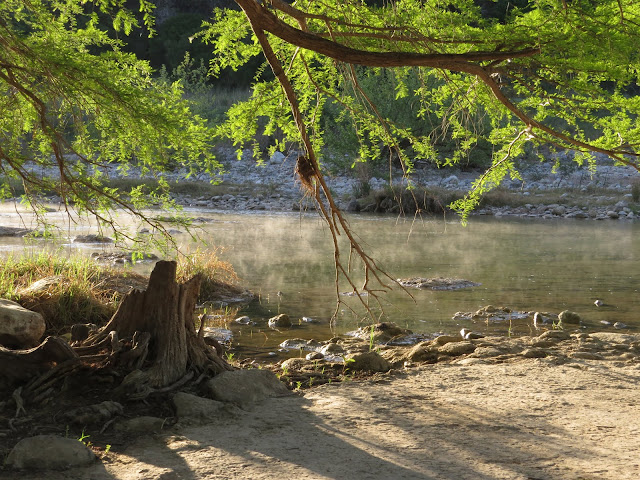 And over there, the far side of the river, is where I want to be.

Low rainfall since the first of the year means the looming threat of drought, burn-bans, and a so-so showing of wildflowers, but it also means low water levels. I’ve crossed this river, the Pedernales, thigh-deep with the current threatening to rip my leg off and drag it downstream every time I lift it for one more short, slippery shuffle far-bank-wards, I’ve also seen it tearing at the bank 20 feet above my head’s current position, but today the water is ankle-deep most the way across with one short section, the main channel on the far side, reaching mid-calf.

I’ve got a lot more hiking to do today and wet feet are to hiking like – well – wet feet. My boots are waterproof but only ankle high, so a more inexperienced me would go through the hassle of finding a dry spot to sit, removing boots and socks, fighting my way into snug-fitting and grippy water-shoes, doing the crossing, finding yet another dry spot to sit,  fighting once again with the water-shoes, made worse now because they and feet are wet, drying feet with the scrap of towel I carry, dragging socks back over slightly damp toes, pulling on boots, and finally going through the elaborate process of doing up the laces. But I’ve done enough hiking to have found out, by accident verified with follow-up experimentation, that as long as I don’t stand and soak, I can completely submerge my tightly laced boots and still have dry feet. Of course the exposed part of my socks get wet and a little of that will eventually wick down past the collar of my boots, but a quick pat-down with the towel minimizes that to just a temporary coolness around my ankles. 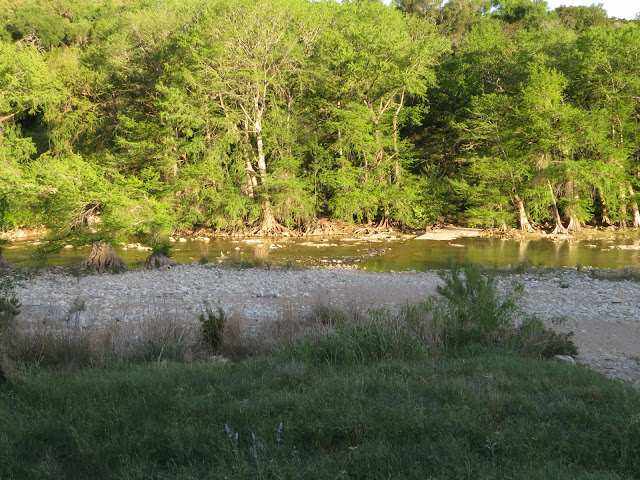 Over here on the east side of the river, ankles damp, feet dry, I’m back in the shadow of the bluff, 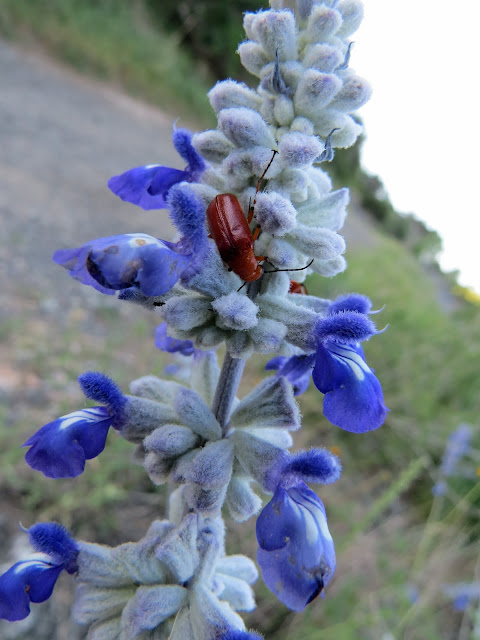 The air is cold enough this morning that the river-water felt warm, and, unlike me, this guy is having none of that, preferring to hang tight right where he is, despite my nosiness, until the rays reach in here and get those juices flowing again. 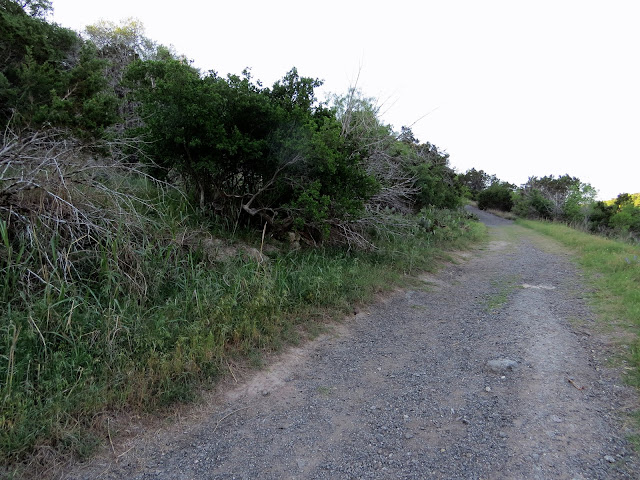 When I’m done peeping into insect bedrooms I have to face the fact that as far as I climbed down to the river on the other side, I now have to climb back up on this side. The yin and yang of life. 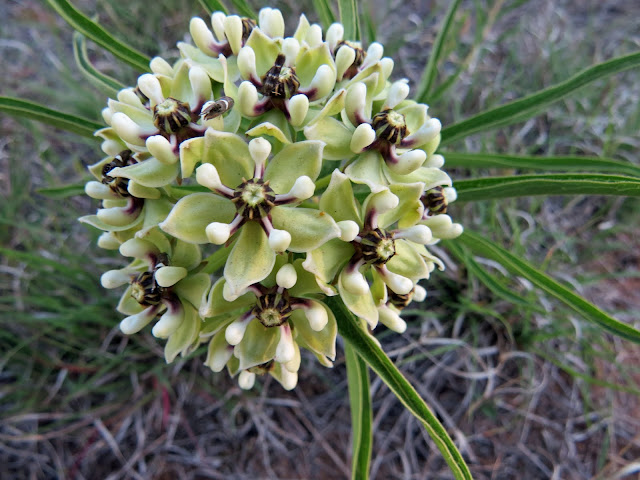 But there’s usually little rewards for those that look for them, such as this solitary globular flower-cluster just there at the top of the bluff being pollinated by tiny little moth-like creatures feeding on the nectar.

One of the dark-winged, white-banded insects is near the top center of the photo with a butt-side view of another  just left and slightly down from him, and if you look hard enough (As if you’ve got nothing better to do)  there are at least two more feeding at this buffet. 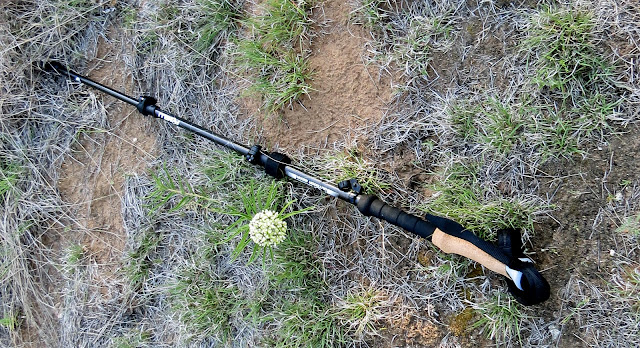 I throw this photo in for a sense of scale. 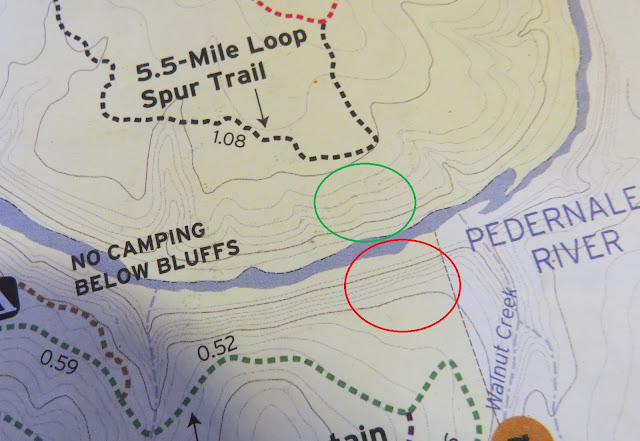 But I have a goal this morning that has nothing to do with entomology. In fact it’s a goal I’ve had for a long time, ever since I first stood on the southern bluff, there in the red circle, years ago and looked across at the gentler slope on the north side of the river. On-site observation and examination of topo-maps has convinced me that, though there is no trail there, it should be a bit of simple bushwacking to get down to the river in this quiet corner of the park without having to resort to any rock-climbing, or falling off of cliffing. . . (Which, as a sport has it's limitations, namely you only get to do it once!) 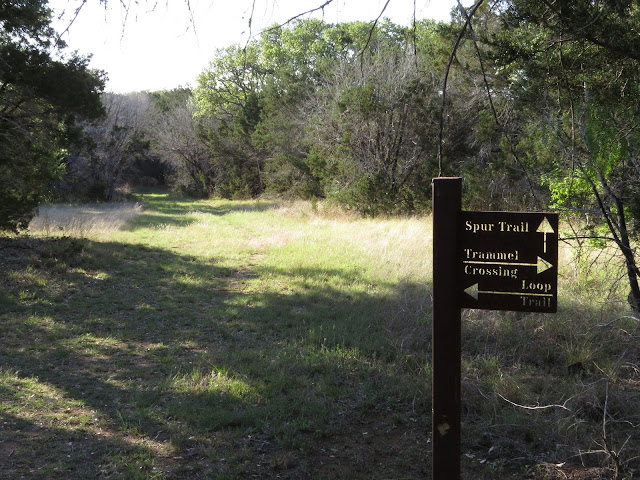 And to make my goal even easier to obtain, the park added the Spur Trail to the official trail system several years ago, which actually isn’t a spur at all but rather an extension of the original Loop Trail. 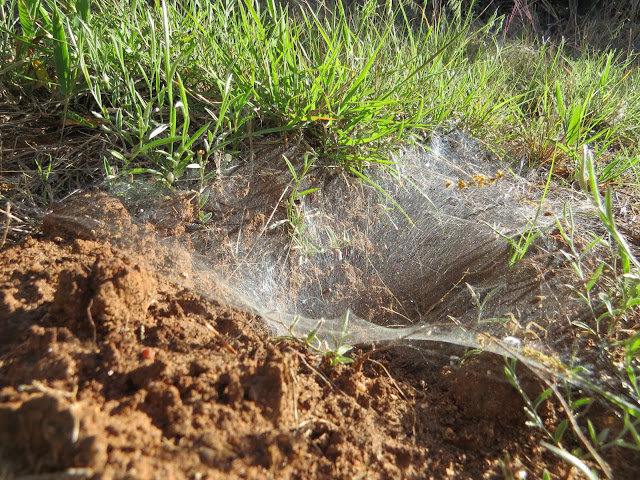 But I still manage to get distracted along the way by this tightly knit web of a Funnel-Spider, 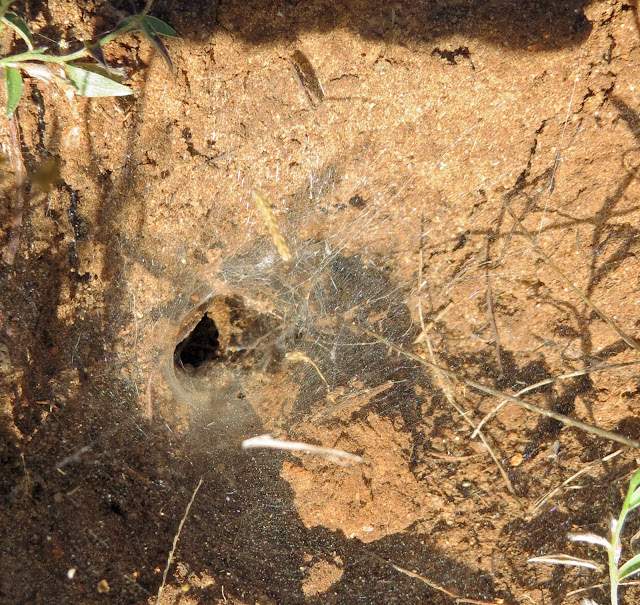 but whoever is in there is smarter than me. I tickle the web, which is slick rather than sticky so prey will slide down into the hole, with a blade of grass but can’t entice the architect to show herself. But eventually I make my way along the Spur Trail to its southernmost point, down there at the top end of that short out-and-back spur of my track. 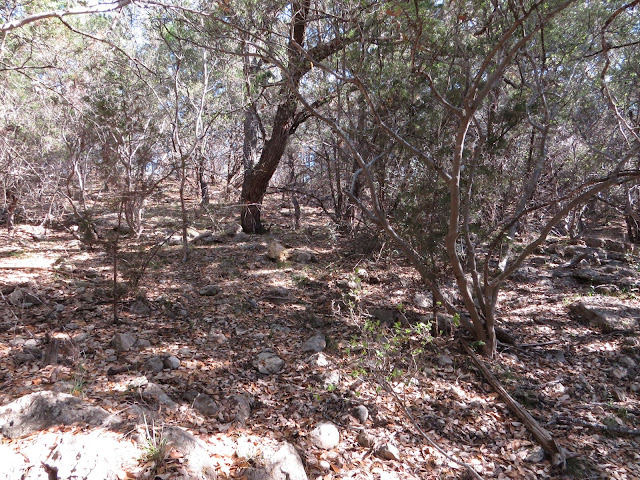 From here I’m only a quarter mile from my objective, but it isn’t exactly going to be a stroll in the park.

With compass in hand I pick a likely looking spot and leave the groomed trail. 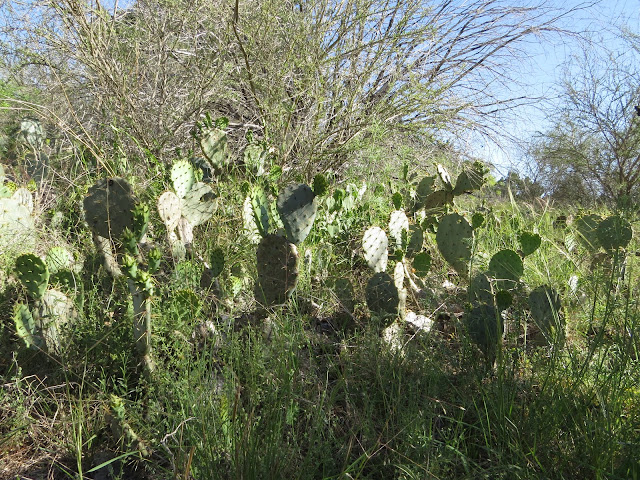 Ideally I want to maintain a bearing of 180 degrees but, as is normal when going off-trail, there are a few necessary detours along the way. 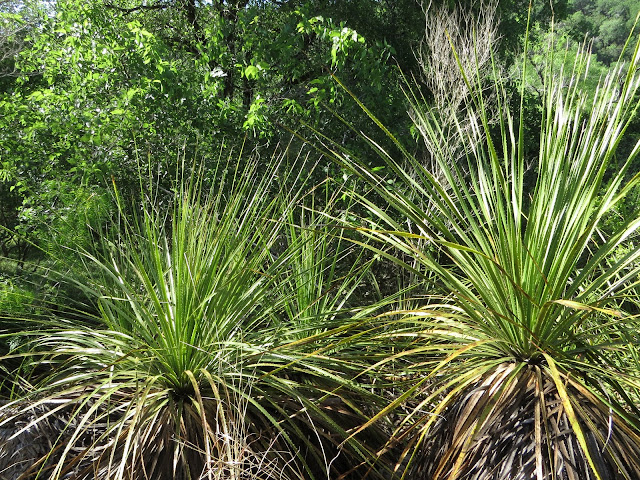 But there is also a wide band of this cousin to the Sawtooth Agave between me and my objective that there is no detouring around. 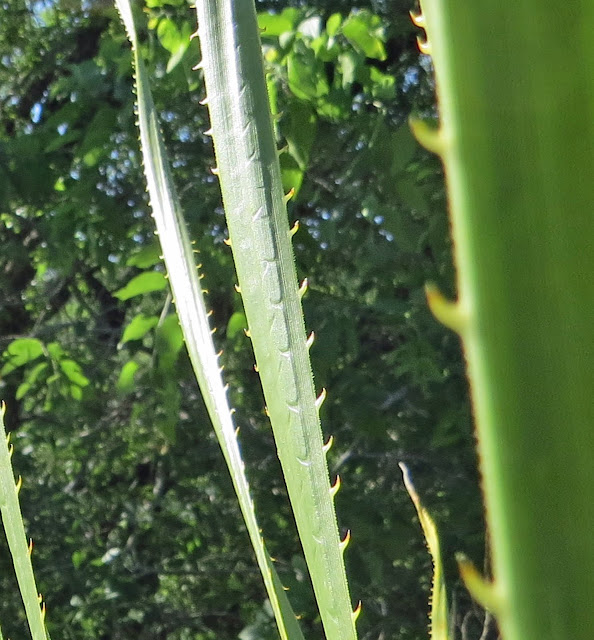 Now any normal idiot would retreat at this point, but I’ve never claimed to be a normal idiot, so I tuck the compass away, because I've gone far enough that now all I have to do is keep moving downhill, and bull my way through, very gingerly. 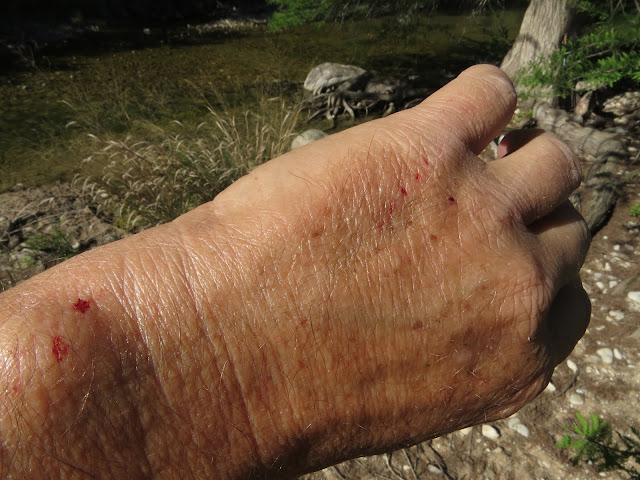 My clothes take the worst of it, (I always hike in long pants and long sleeves) but my person doesn’t come out unscathed.

This might not look like much here but I've already washed the blood off a couple times and those little needle-darts don’t always leave marks. But I knew all about each one of those little pricks when washing veggies for dinner that night! When I sprayed the veggies, and of course, the hand that was holding them, down with vinegar I promptly started dancing and cussing because that shit stung!! 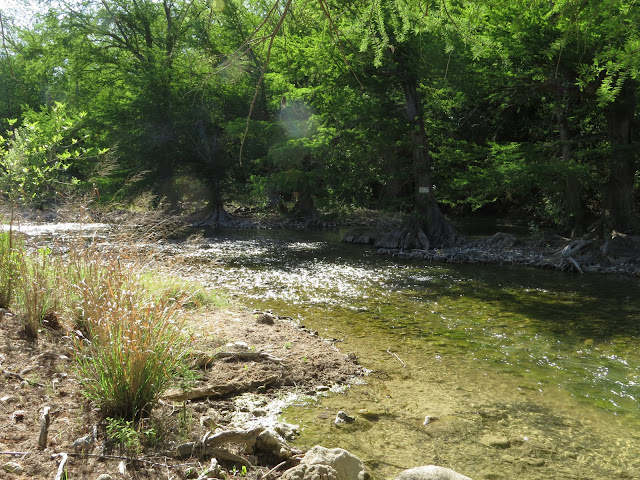 But I do manage to make it down to the river! 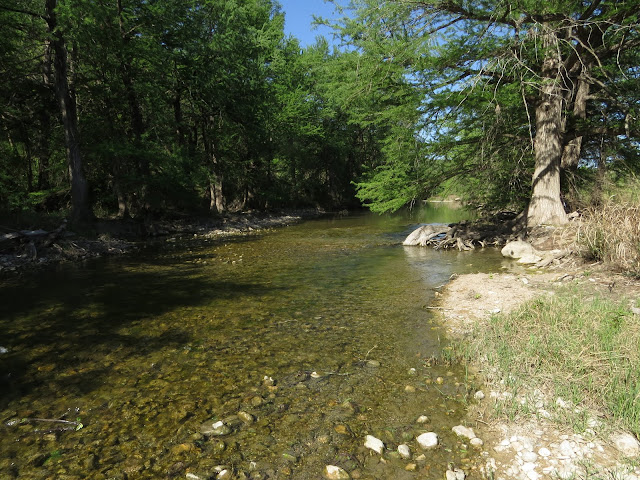 A nicely isolated, quietly pristine river with water so crystalline it looks shallower than it really is. 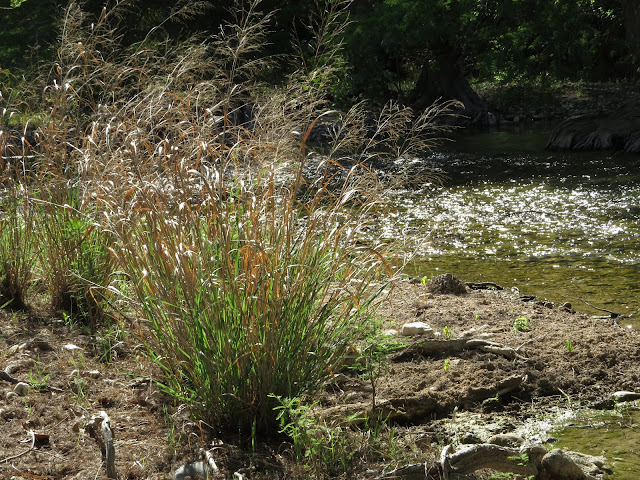 Which is no big deal because I wasn’t going to cross the river here anyway.

Texas laws regarding waterways, private property, and trespassing are very specific. Generally property lines run down the middle of the main channel. As long as you're floating on the water you are fine, but once you put your feet on the bottom you are trespassing, so despite how inviting that barely visible little shaded inlet on the other side of the river, up there in the top-right, looks 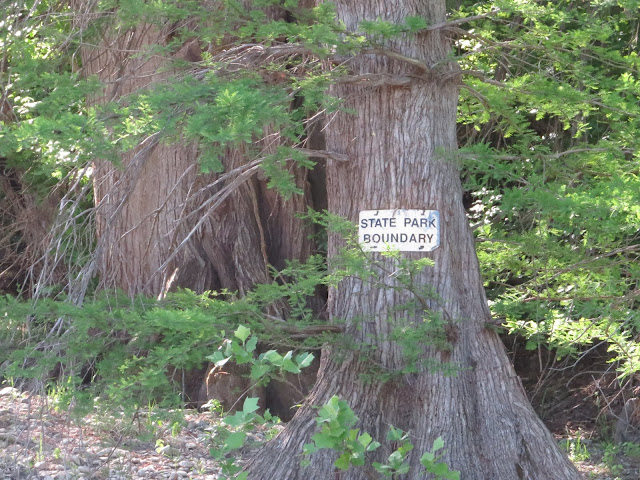 the park boundary on the south side of the river is right there and anything left of the sign, which includes that little inlet, is trespassing on private property. 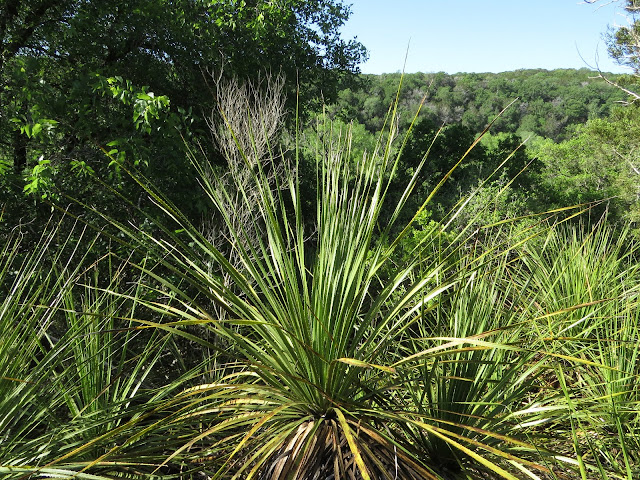 Once more into the breach!

After an extended break there beside the river, which I have all to myself, it’s time to make my way back uphill to continue my hike. 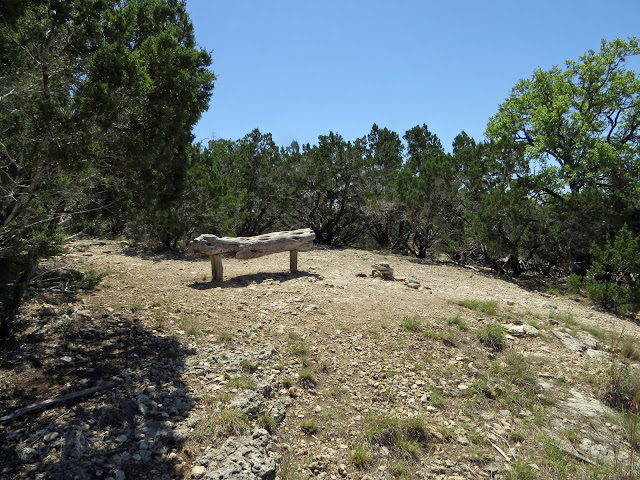 I survive my detour, smugly satisfied with myself, regain the official trail, and eventually make my way up to the northernmost point of the hike, which is at the designated Scenic Overlook.

I find the single, rustic bench that constitutes the overlook sunning itself without the least bit of shade 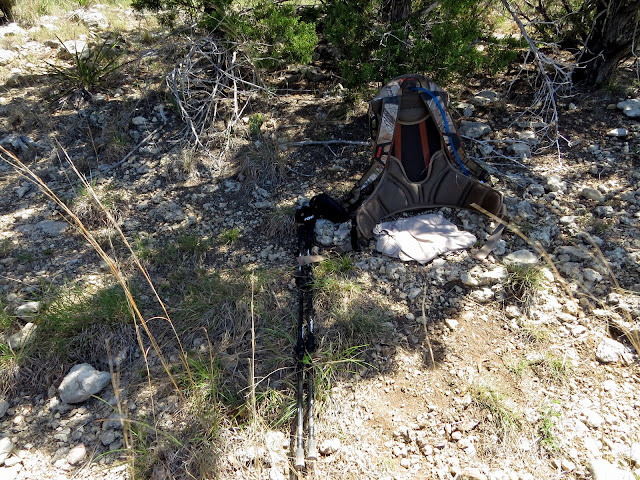 so I make my own little nest and hang out there, nearly alone, (One solitary hiker made it to the overlook bench, spent all of 15 seconds looking, then left again.) until the westering sun eventually starts encroaching on me. 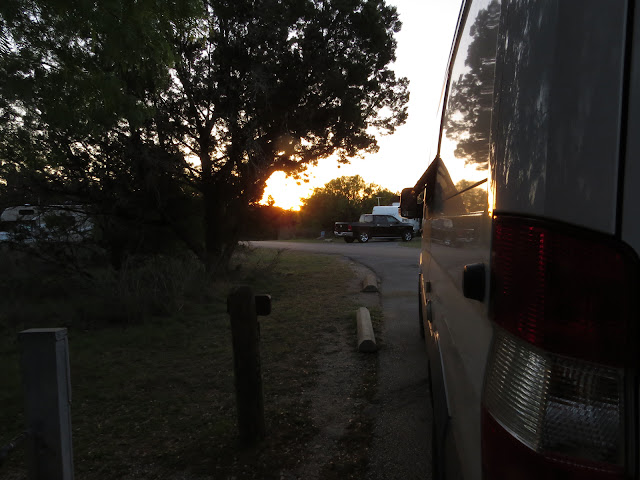 All in all, a very satisfying day out on the trail alone with my own thoughts (We’ll get to the voices in my head another time. . .) with the bonus, the extra chocolate-chip cookie in the bag, of achieving a long-time goal.