Circling The Drain – – I Mean The Lake

It’s Sunday morning (June 19 in real time) and it’s time to start heading on up to Michigan for the family reunion, (Mom really doesn’t like it if I’m late. . .) but first there’s plenty of time this morning for one last hike. 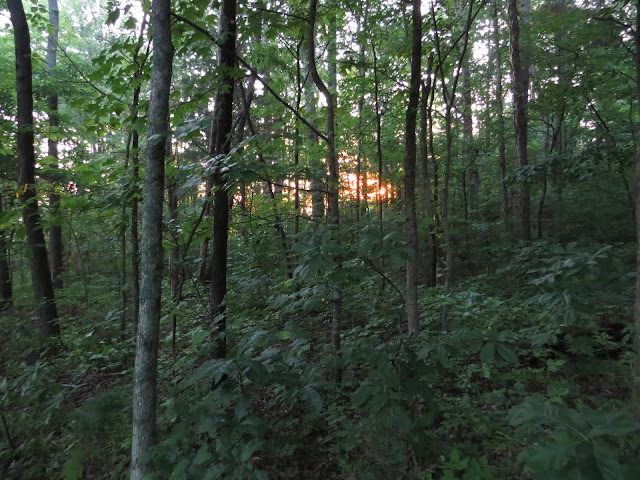 Though I have to admit that I’m kind of over this hot-and-humid-jungle stuff found here along the Ohio River.  Oh sure, this time of year it’s hot and humid back in Central Texas too, but at least there I don’t have to deal with the abundant, or rather over abundant, ticks and chiggers 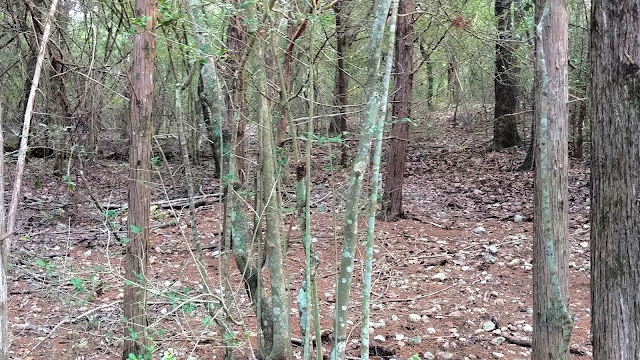 and instead of being ensnared in a claustro-tunnel of green, I can see through the woods a little, as this photo above, taken along one of the trails on our property, shows. 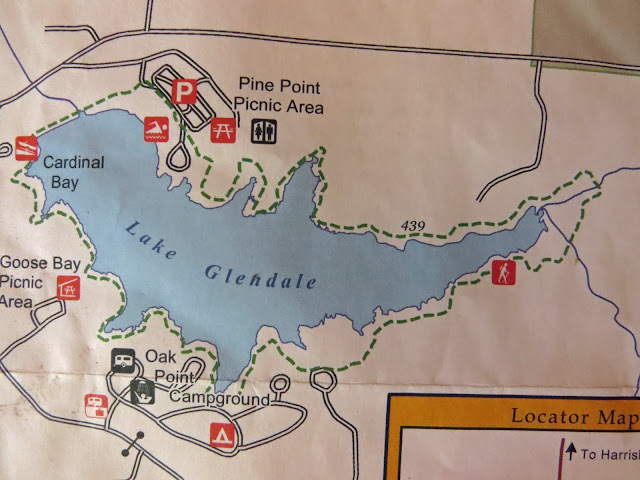 But at least this 3.5 mile trail sticks fairly close to the shoreline of Lake Glendale 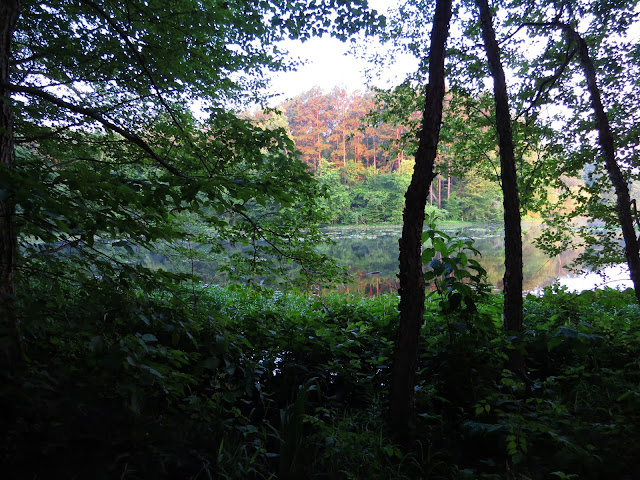 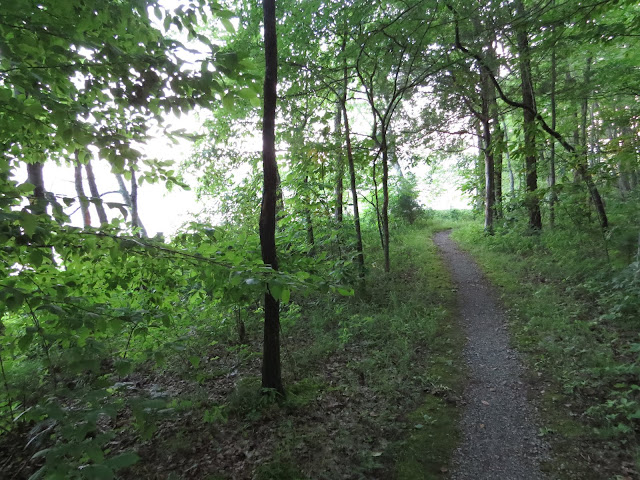 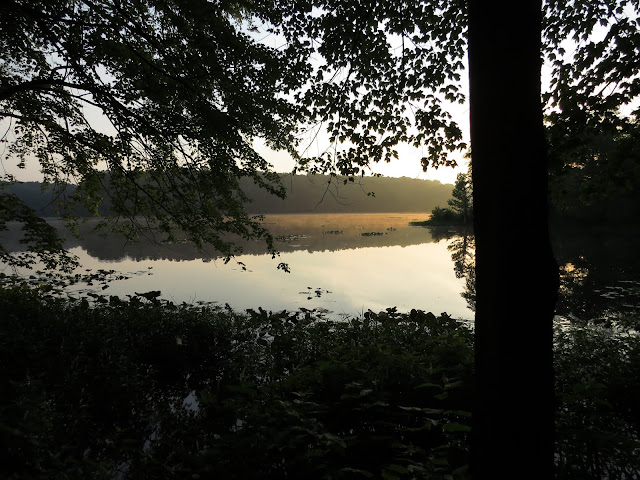 and the sunrise start to this hike adds a little color to the view. 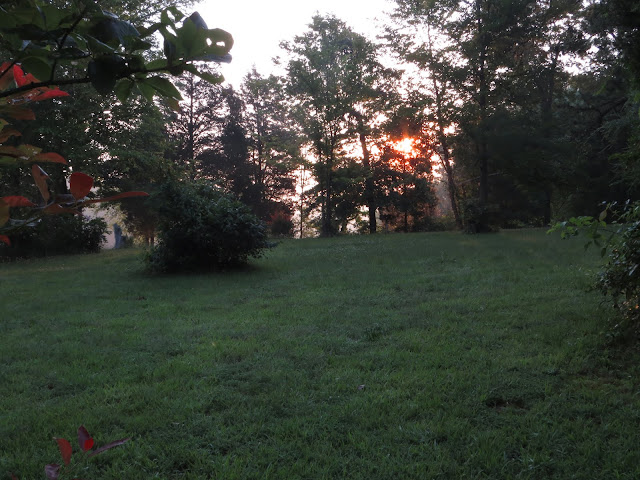 Shortly after setting out counter-clockwise around the lake I come across the cleared ground of a combination picnic/group camping area.

Ever since I arrived on Wednesday the road into here has been blocked off so I guess no one has reserved the place.

Not that I’m complaining! 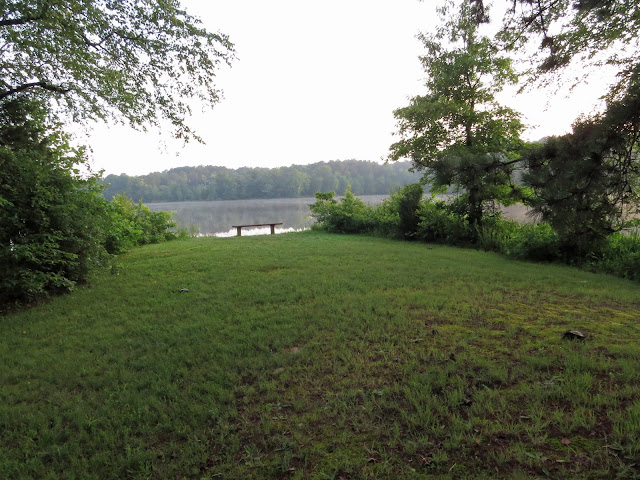 Standing in the same place I took the previous photo, I turned towards the lake and took this one. If you look close you will see three other creatures 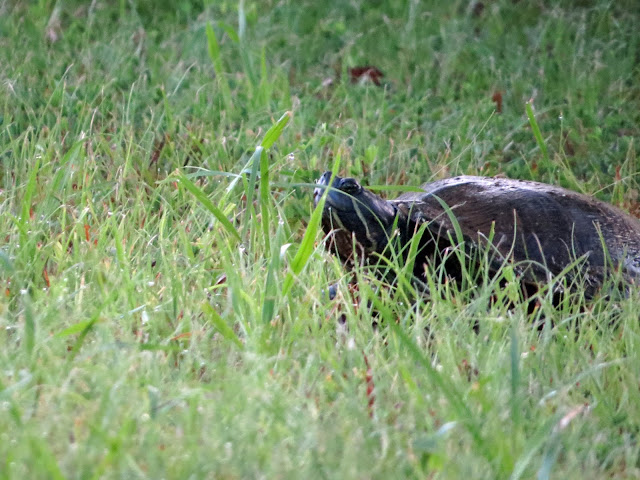 that also aren’t complaining about the people-free picnic grounds. 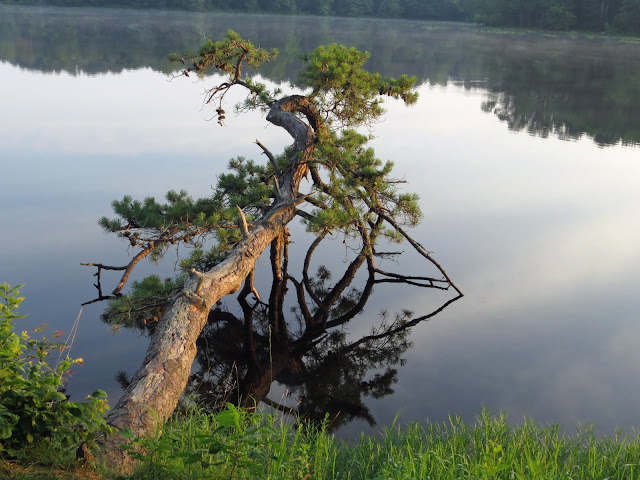 Leaving the turtles to do their – well – turtle stuff, 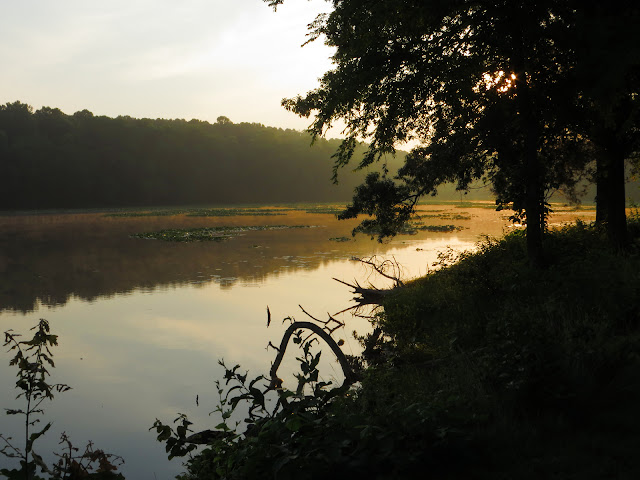 I quietly worked my way a little farther around the lake, 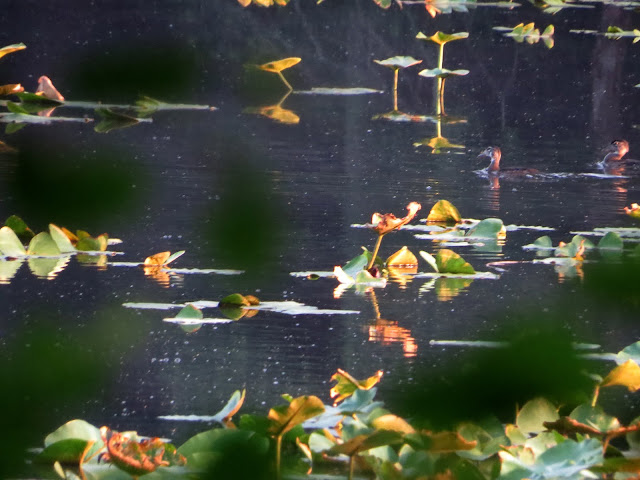 at one point getting lucky enough to capture this flora-and-fauna vignette through the choking surrounding vegetation. 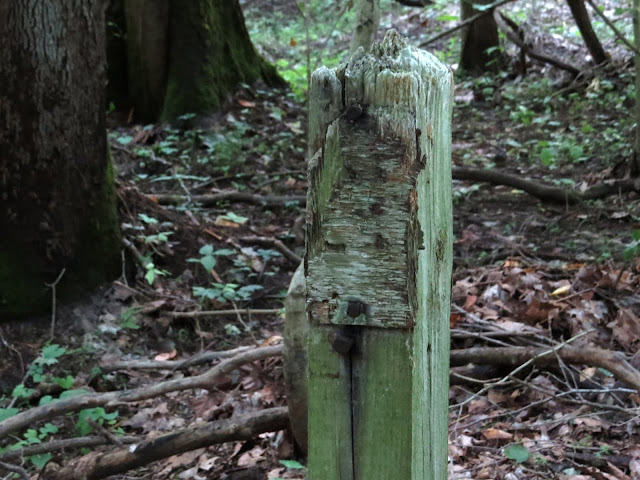 Whatever this signpost was trying to say, it has been forever silenced now. 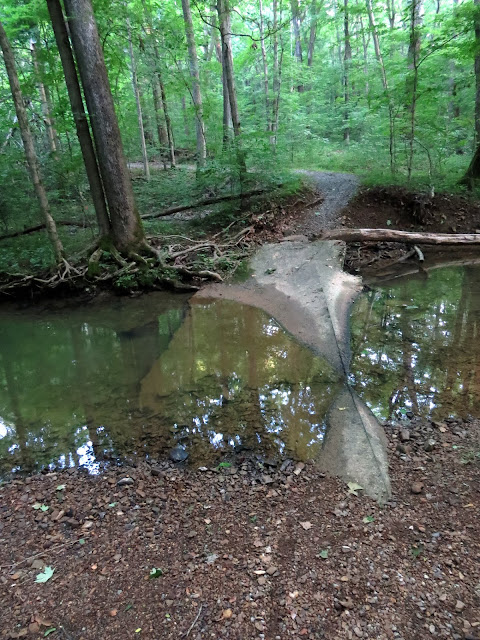 Near the eastern end, the swampy end, of the lake two unnamed (As far as I have been able to determine anyway) creeks feed into the lake.  The first is not much more than a slightly wetter area in the already wet of this low ground but the second is somewhat more substantial and the concrete crossing certainly looks worse-for-wear, but is still easily negotiated, especially by a two-sticker like me. 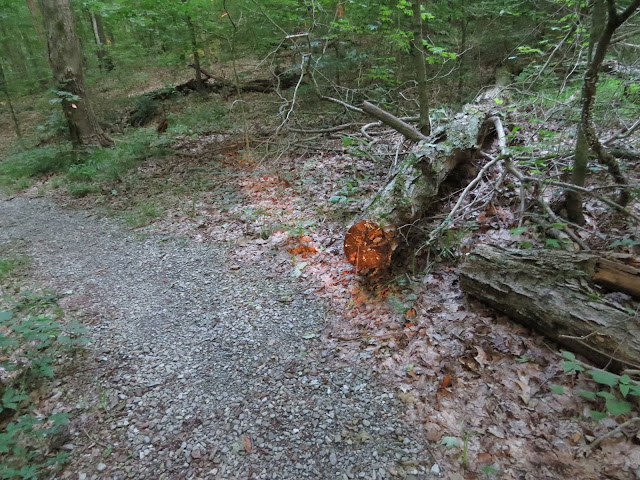 Crossing the unnamed creek means I’m now headed west and by sheer luck of timing a streak of orangeish light from the rising sun sneaks in through a narrow gap in the trees, zips over my right shoulder, and makes the end of this fallen log glow as if it's lit from within.

A few seconds either way and I would have missed this. 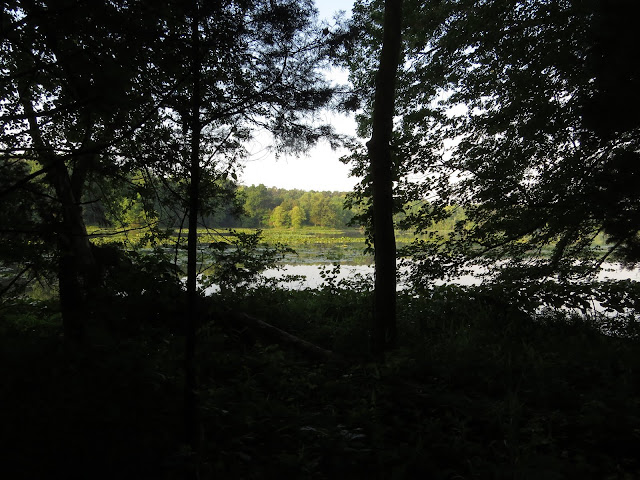 And it’s not like there’s loads of places where sunlight can get all the way to the ground around here. 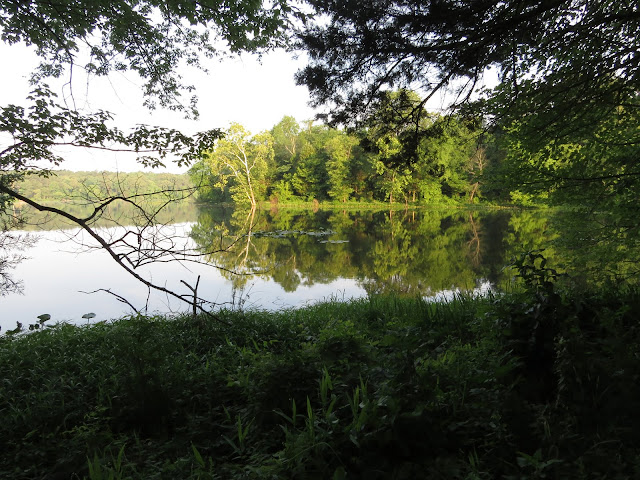 Shortly after taking this photo a kayaker drifted in from around the point near that white tree.

I sat quietly and watched as the kayaker gently drifted along the shoreline with the occasional, slow and deliberately soundless stroke of the paddle.

I didn’t take any photos of him/her, or otherwise make myself known, because whoever it was deserved this solitary moment to themselves.

If you look close in the highlighted area of this photo what you are seeing is the plethora of spiderwebs I’ve collected on my hat this morning. In addition to keeping a close eye on my light-colored pant-legs for the telltale dark spot of rampaging ticks and the tiny red dots of vicious chiggers, I’ve been pulling webs off my face and spitting out the little bits of bugs and spiders that come with them ever since I stepped onto the trail. The downside of being first out. 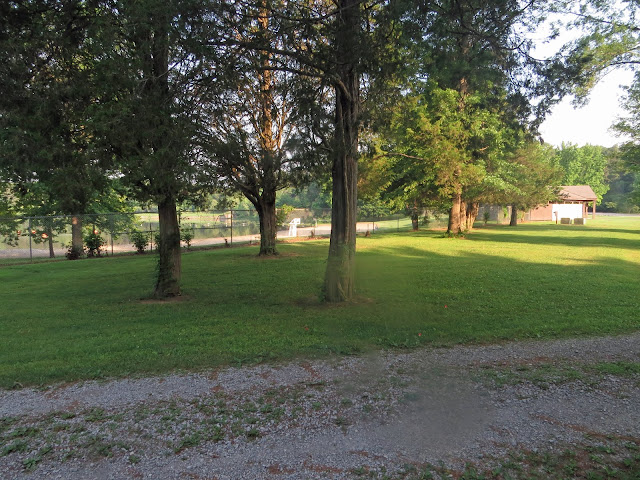 So it was a relief to step out onto the cleared ground, the web-free environs, of the Pine Point Picnic Area which is on the opposite side of the lake from the campground. 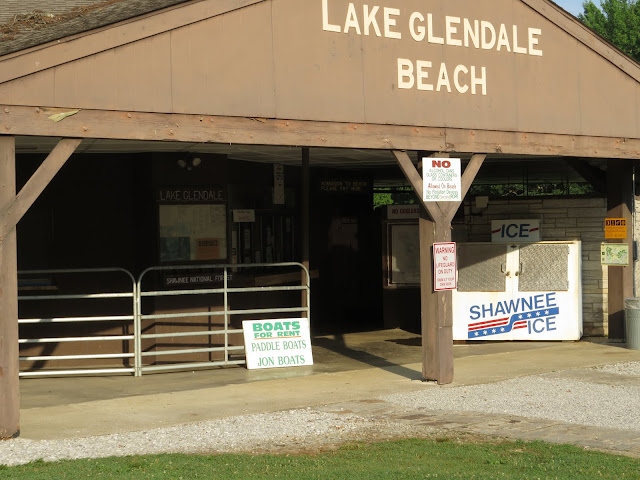 Adjacent to the picnic area is the official beach and the only place swimming is allowed on the lake.

If it looks kind of gatey with lots of NO signs posted around, that’s because it is.

The beach is run by a concessionaire that want’s blood $4 from anybody using it. To that end the picnic area is separated from the beach by a high fence (Just visible on the far side of the trees two photos ago) and the only way in is through this building. 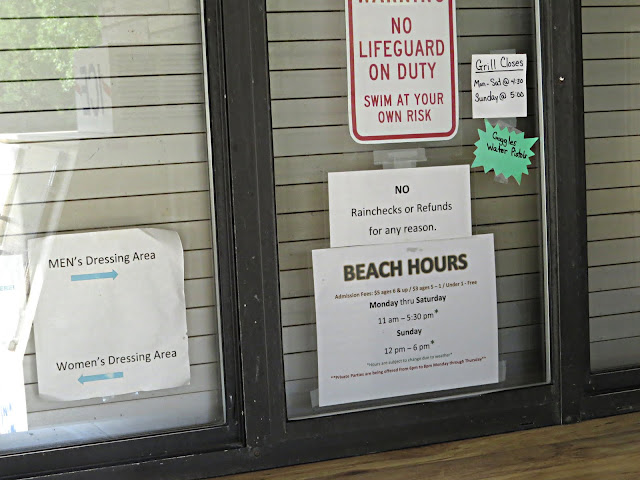 Saddly, if you want an early-morning or sunset swim you are shit-out-of-luck because the concessionaire has taken banker’s hours and one-upped them so your swimming is restricted to the absolute worst UV hours of the afternoon. But during those hours they are more than willing to sell you overpriced grill-food, goggles, and water pistols for your swimming enjoyment!

Of course this is our own fault since it’s a direct result of our unwillingness to pay for the upkeep and running of our own public lands. 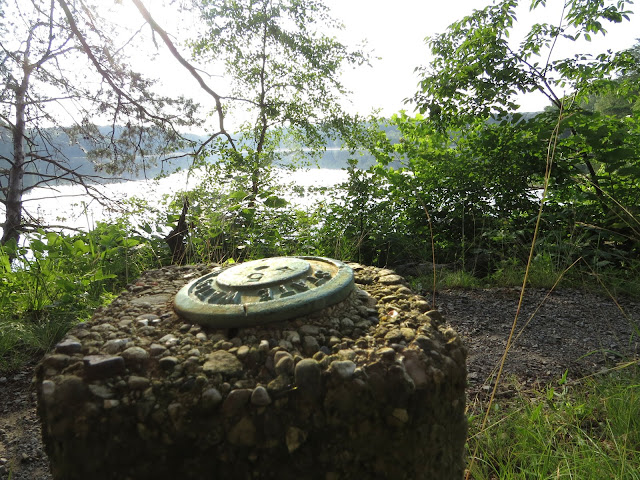 This medallion marks point R5 of the State Water Survey.

I don't know what that is either, but they do have a facebook page, which to me pretty much guts their credibility. . . but that's just me. 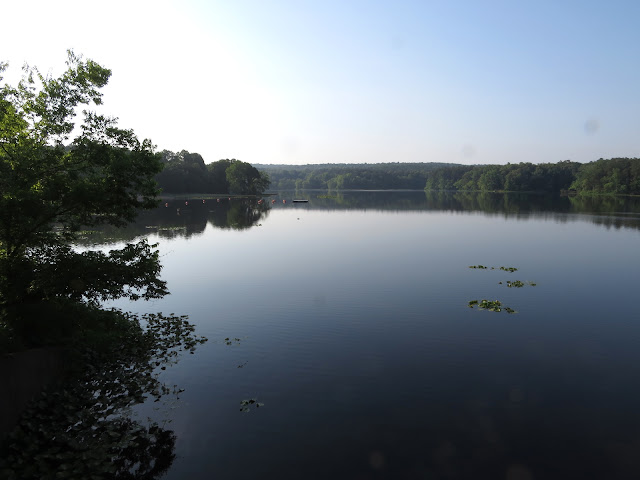 Once I get across the dam at the head end of the lake the sun is going to be shining right off the lake into the camera, so I will leave you with this last photo taken from the dam looking out across the 82 acre lake. (Swimming gulag area just visible as a string of dots, buoys holding up the official boundary rope, to the left)

In the meantime there’s a slot at a Fort Wayne Walmart, 430 miles away, waiting for me so I better wrap this hike up and get on the road.