The Loss Of a Sole


This morning when I was trudging powering through my laps on the back of the property I was dismayed and confounded to find myself stumbling a lot. I mean A LOT. Tripping and scuffing and just generally being a clod. 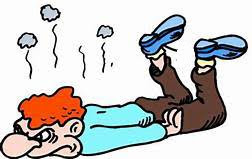 What the hell!  Did I suddenly get old overnight?

OK, yes; technically I am old, and even older today than I was yesterday, but you know what I mean.

This seems like a cruel joke!  Losing the ability to gracefully put one foot in front of the other is something that should sneak up on a guy over time, not happen overnight!

My second (hopeful) thought is heat related issues. After all, for most of July (When this happened) we have been topping 100, and even though it is early morning the thermometer is already mockingly high and the Texas sun is  blazing fiery swaths down through the trees.

But that’s normal around here this time of year and something I pay attention to. If the sweat has built to a sheen on my arms, if a trickle has collected on the point of my nose, and another on my chin, and even if the stinging crap has worked its way down through my eyebrows, then all is well. But if my palms are slick and greasy and sweat is dripping off of me to patter on the ground like a spring rain then I know it’s time to slow down and let my body cool off before I get to the stumbly, weak, and dizzy stage of heat exhaustion. So no, can’t blame all this clumsiness this morning on that.

Maybe it’s the weighted pack I have on my back! After all, I’ve got it loaded to half-again my normal hiking weight! But no, I’ve been doing that for years now, so that can’t be it either. . .

Which leaves me stumbling and tripping and crashing through the woods with dark and dire thoughts of walkers and nursing homes. . . 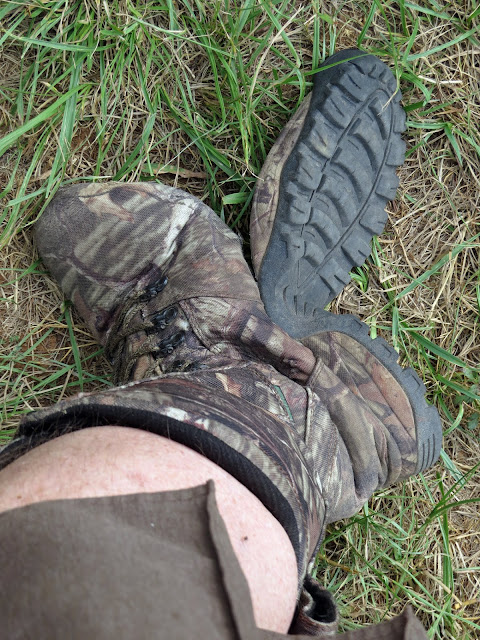 Until, on one particularly bad stumble, I happened to catch a glimpse of extra flap down there around my snake-boot.

I don’t actually wear the snake-boots for snakes. In our dozen or so years on the property, among the loads of non-venomous serpents, I’ve probably stumbled across a total of 3 or maybe 4 venomous snakes, all more than happy to slip away without confrontation. 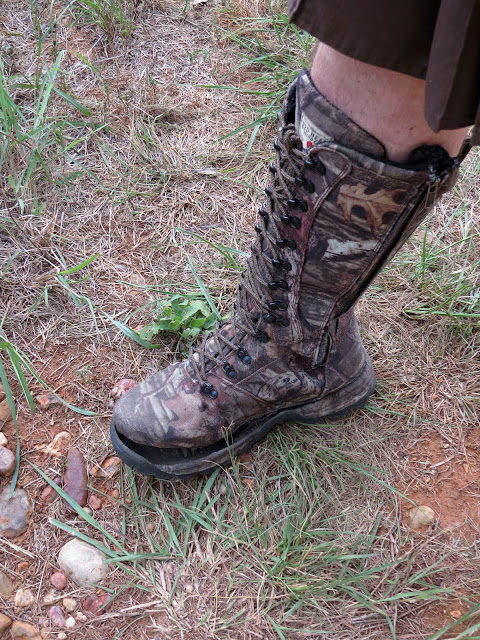 No I wear them because when here on the property I almost exclusively wear a kilt and when I venture away from the rather civilized environs of the barn and driveway I use the tall snake-boots to protect my lower legs from slashing thorns and pokey sticks.

I like kilts because I’m not a fan of restrictive clothes, buying large shirts instead of the mediums I should be wearing, and even then, cutting the sleeves out of the worn ones that have been relegated to shop-wear, and I gave up jeans and T-shirts (In fact I don’t wear anything I have to pull on over my head anymore)  back in 1980 because they are too heavy and restrictive. (Wearing nothing but jeans and T-shirts every single day for three years in the high heat-high humidity environment of a Mississippi shipyard might have something to do with that. . .)

Made out of 7.5 oz. fabric, the Utlikilt I wear is not exactly what you would call lightweight, but it does wear like iron, in fact I still have my original kilt which is has suffered over 15 years of near daily shop-abuse, but despite the heavy fabric, by its very nature, these kilts allows max freedom of motion, as well as plenty of ventilation.

The major disadvantage, other than leaving my lower legs unprotected, is that wearing a kilt allows gravity full and unfettered access to my balls, which only exacerbates a rarely mentioned old-man issue involving the same sort of sag that inches old-lady nipples closer and closer to their waist. In order to keep them, you know, the balls, from taking a dip I figure it won’t be too much longer before I’ll have to hoist them up out of the way when I sit on the toilet! 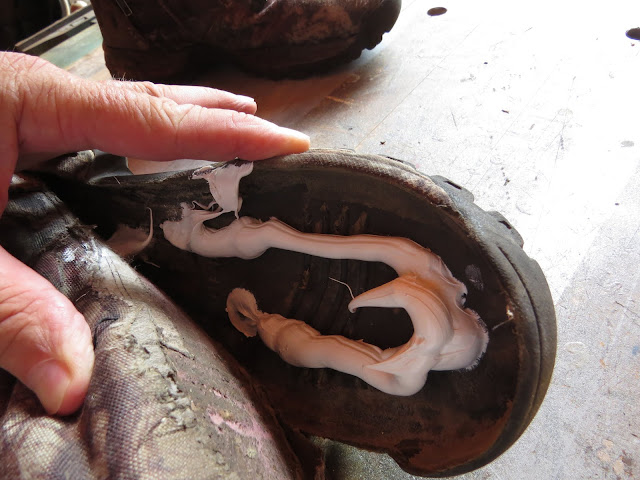 My snake-boots are as old as my kilt and showing their years in many ways, (They used to be waterproof but that ended a while ago.) but even if a store was right around the corner, which it’s not, those dang things aren’t free! So I’m going to try a quick fix here.

The uppers were originally glued to the sole, so why can't I just glue my wayward sole back into submission? The glue needs to be water-resistant and flexible, so I fall back on an old standby, caulk. 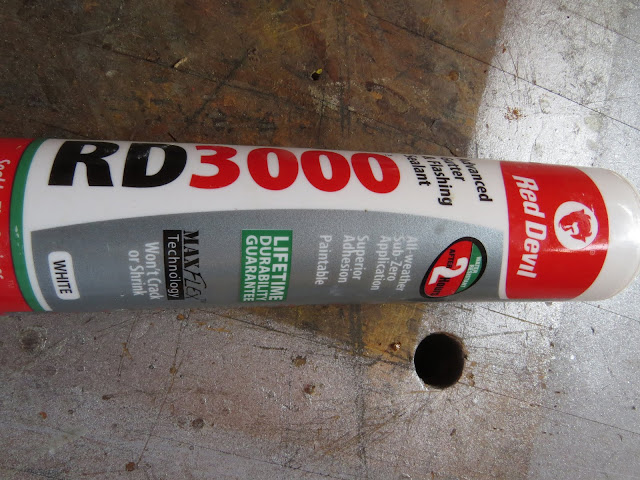 An adhesive caulk would probably be better - you know - since I'm trying to adhere things, but I don't have any of that on the shelf at the moment, (Note to self, add adhesive caulk to the shopping list.) but I do have a partial tube of gutter-caulk left over from installing the MaxAir Vent on The Van. 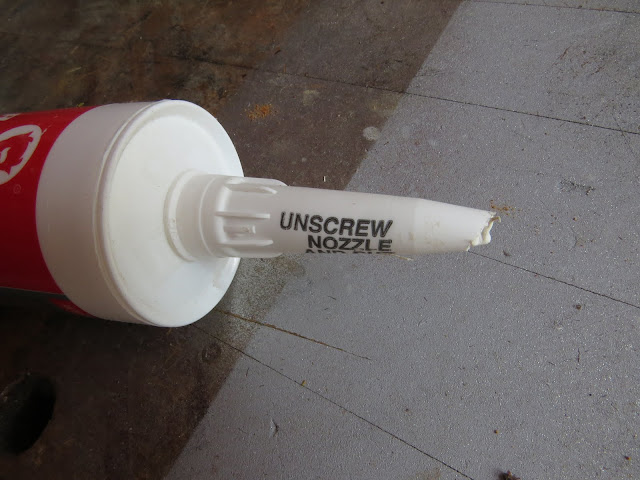 The issue with partial tubes of caulk is that it doesn’t take long before they are a partial tube of cured caulk, no matter what lengths you go to to seal up the tip. Which makes old tubes of caulk pretty much useless unless you have some place to stick a tubular object with a point on one end.

But I have found that these tubes with the unscrewable tip can be successfully kept for much longer than the fixed-tip kind.

But it has to be the original tip that’s full of caulk. I’ve tried moving an uncut tip onto a partial tube but that doesn’t work so well, allowing a cured plug of caulk to form inside the tube, successfully blocking egress for all the rest of the caulk. My theory is that when the caulk in the cut tip cures there on the shelf while the tube waits for the next time you need it, it forms an effective seal that protects the caulk remaining in the tube itself. 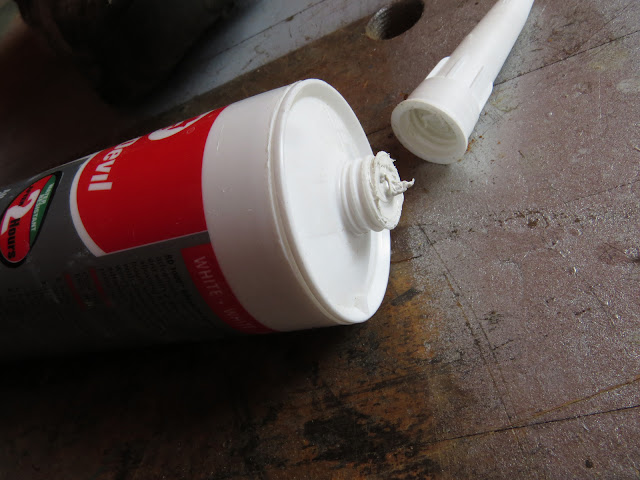 Now I can unscrew the plugged tip, put the tube in a gun, and dispense fresh caulk right from the end of the tube. It may not be the neatest way to apply caulk, but it beats throwing away a whole tube, just because I needed a little bit. 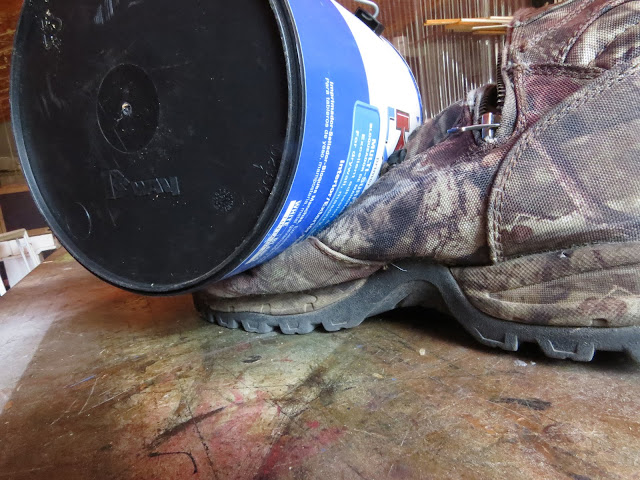 After firmly mushing the upper and sole together to spread the caulk, I threw a kan of Kilz primer on top as a clamp. (There are so many solids in Kilz primer that shit is heavy!)

The caulk cures in 24 hours and I did this just after flapping and stumbling and tripping my way back down the hill, so I’ll see when I do tomorrow morning’s laps if it is up to the job. . .

Update: I chickened out and strapped on my regular hiking boots for the next day's laps, figuring it wouldn't hurt to give that much caulk extra time to cure. The next day I zipped up the "repaired" snake boots and took them out for a trial run. It's a bit lumpy under my toes but the sole stayed in place, at least for the first two miles. . . And not surprisingly, I have since had to 'caulk' the other boot as well.