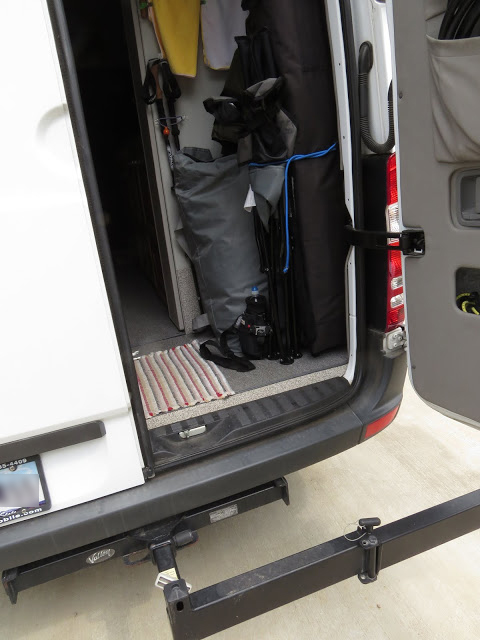 Weather permiting, I often have both the side and back doors of The Van open during the day

Depending on campsite layout, I use the rear door as much if not more than the side door to get in and out. 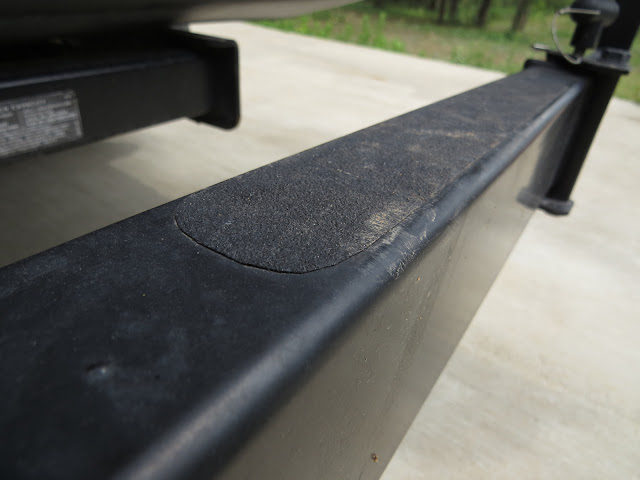 Wet, powder-coated steel, such as on the swing-away bike rack hanging off the back of The Van that I use as a step, is slick, so I added an industrial sized patch of no-skid on that part. 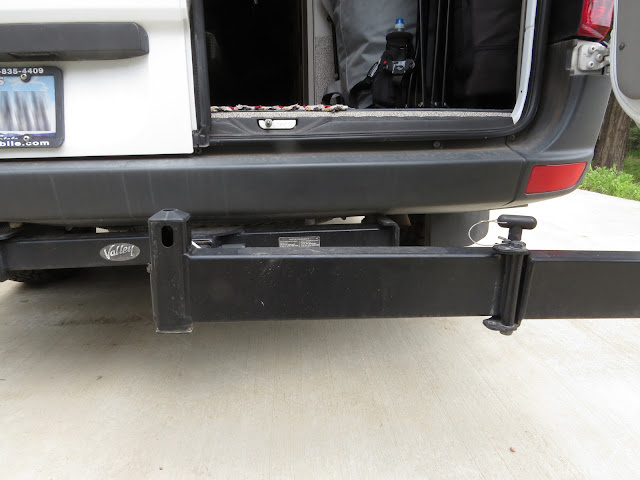 But still, it only took a couple near-misses before I figured out I needed to hang onto something when making the transition.

But what to grab?

The lightly strapped down camp-chair/EasyUp there just inside the door? Besides not offering much of a gripping point, they tend to wobble around when any force is put on them – you know, like when I’m in the process of falling on my ass.

The edge of the door?  Though not a particularly comfortable grip, it does offer a more stable hail-mary point to hang onto, but I have visions of the door swinging closed and mangling my hand. 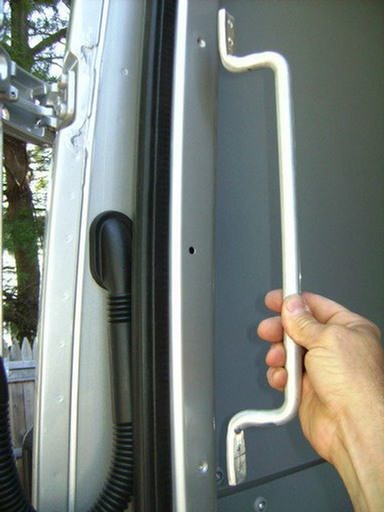 A search on that interweb thingy turned up one and only one possibility.

At $20 + $20 shipping it is expensive, but not horrible, and it is functional, but esthetically it sucks. It’s a round bar violently bent in a jig with the ends smashed flat on an anvil and drilled – twice so that with two holes on each end this one grab bar works for both rear as well as side doors. 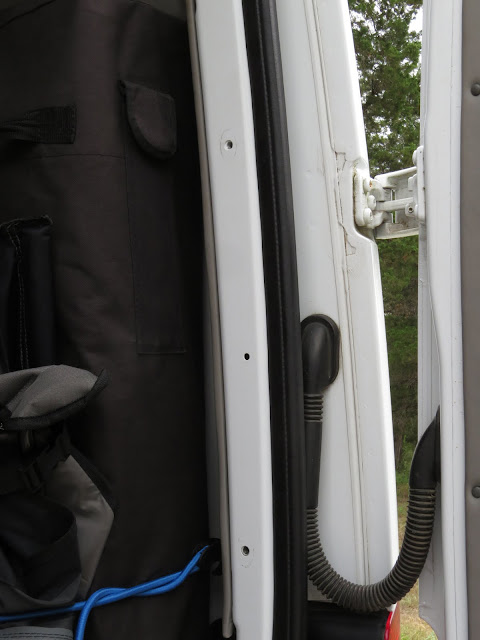 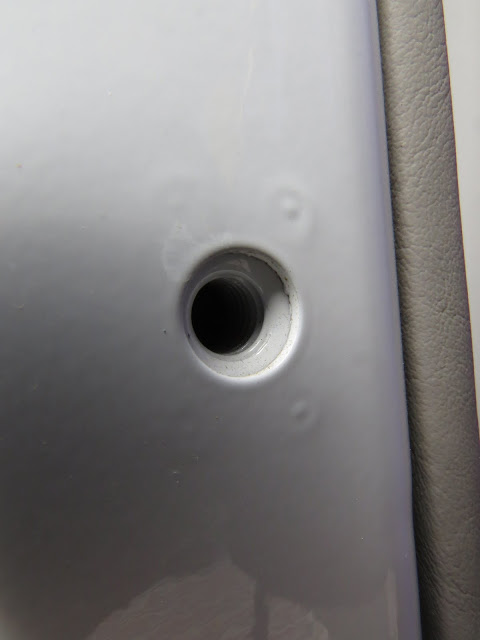 and a couple of the holes actually have nuts welded on the backside, the spacing of the holes on the sliding door is different than that on the rear door.

Why the hole spacing is different between the side and rear doors is a question you would have to ask the design crew, because it makes no sense to me at all.

At any rate it looks like $40 for an ugly hand-strap. 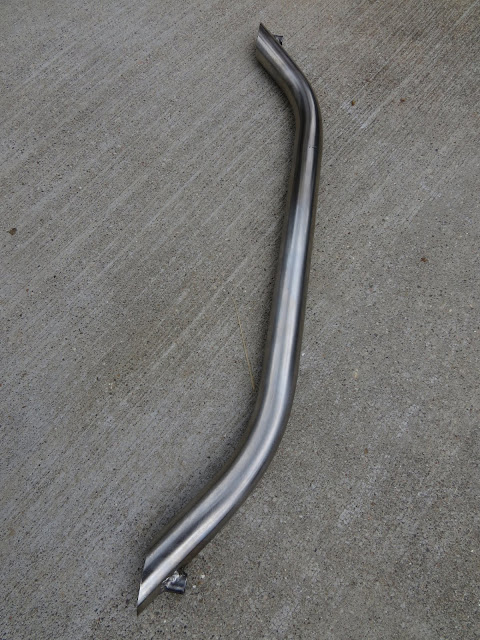 I turned up at my brother’s (guru of all things metal) shop expecting something very similar to what I found on line. A simple strap-handle that I didn’t have to pay $20 shipping for. What I got instead was a work of art.

When I described what I was after he went wandering off and came back clutching a stainless steel railing that came off of some fancy boat or other. (I don’t ask why he has things like this laying around. He just does.)

A couple judicious cuts removed the large flat mounting plates and the end and trimmed things down  so that there is an inch and a half clearance on the inside of the handle.

Now the only problem was that the bit of pre-formed railing was about 12” too long. A couple more cuts and a little welding took that 12” right out of the middle.

At this point I’m wondering just how the hell I was going to mount this to The Van, but the metal master had a plan. 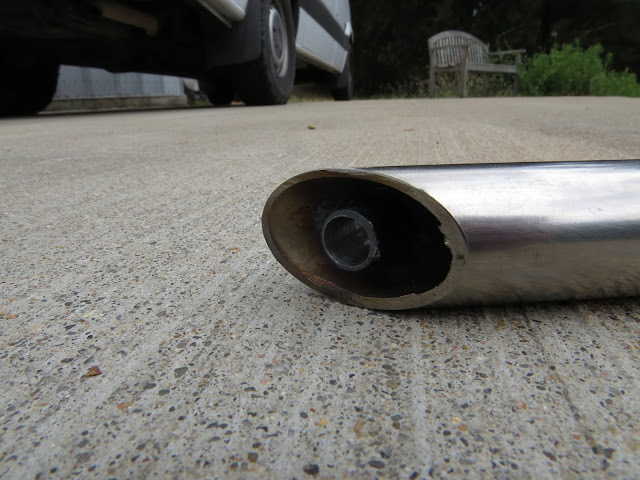 After measuring the center-to-center spacing of the nutted holes three times (For some weird reason the spacing is something strange like 89 mm so it took several measurements to confirm I wasn’t holding the rule cockeyed or something) we built a jig, used it to drill holes through the railing, 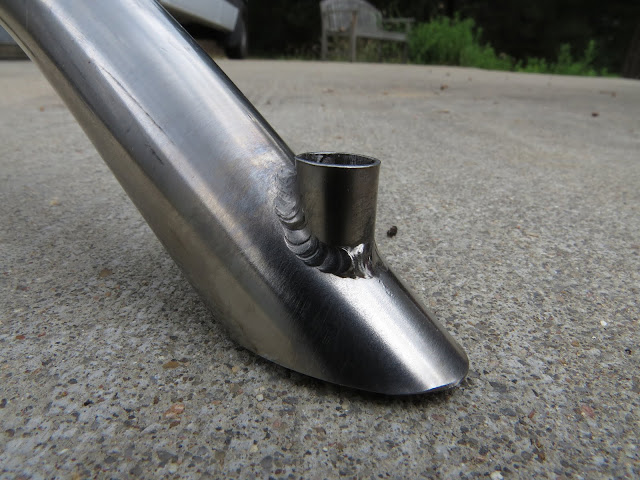 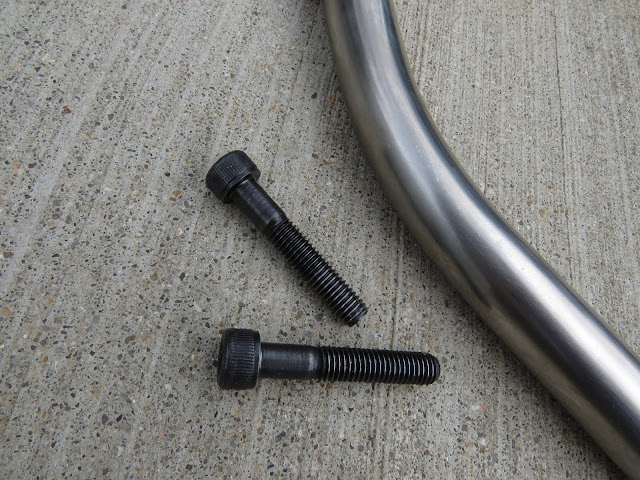 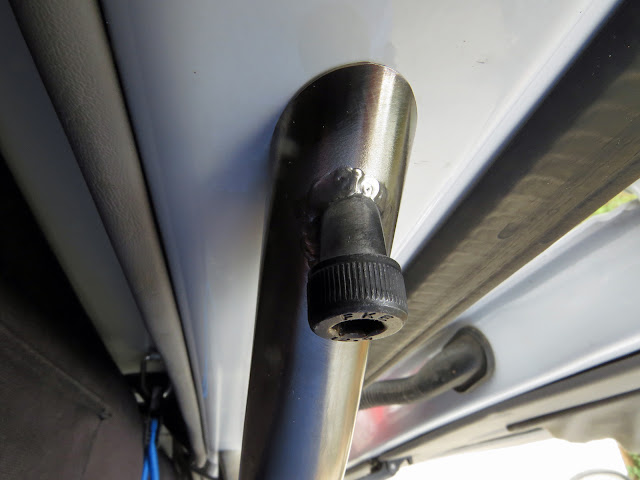 and there you have it, 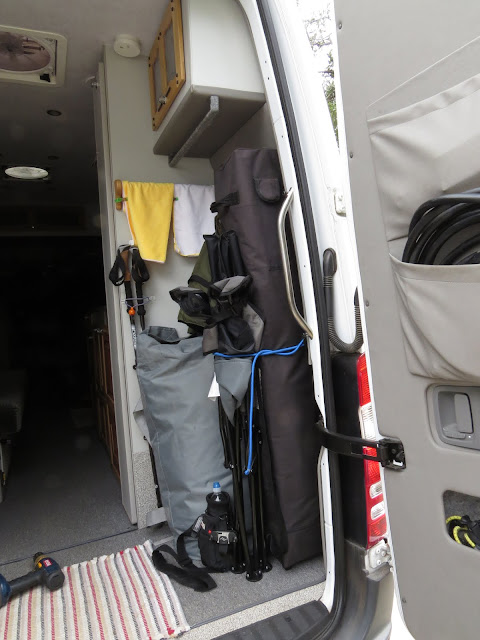 a snazzy new grab rail to help keep me from busting my ass!