Water Usage in The Van 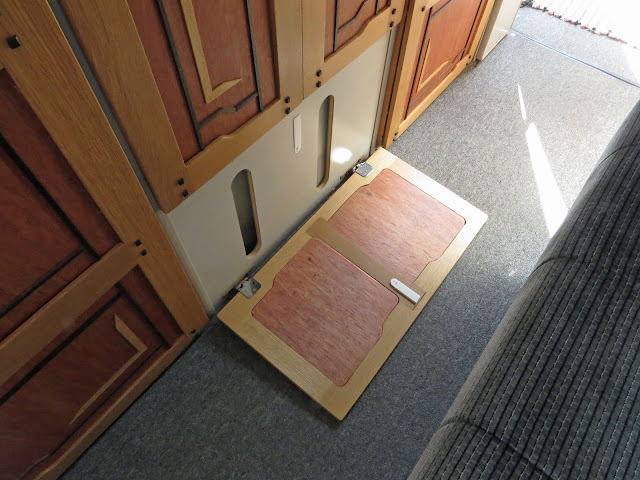 A while back I wrote about making this modification to The Van to make it simpler for me to check my potable and grey water levels by simply opening the false cupboard door and looking directly at the levels in the tanks through the "windows" I cut in the cabinet face.

I have one 10 gallon tank for each, potable and grey, placed side by side under the sink. (With the added bonus of no unprotected plumbing at all outside the shell of The Van to worry about.) With this setup I carry a maximum of about 84 pounds of water. (When the potable tank is full the grey is empty. As I draw water from the potable tank making it lighter, some of it ends up in the grey making that one heavier.)

About now some will be shaking their heads thinking that 10 gallons is a ridiculously small amount of water to have to live on, and when I was young and dumber and susceptible to the lies of "experts" I would have agreed.  Hell, in one of the previous rigs I built for myself I installed a 40 gallon potable tank smugly thinking 'Now I can really go boondocking!'.

Well that turned out to be a bone-headed decision!

Not only did I never even come close to needing all that water, that 40 gallon tank, and it's corresponding grey water tank, cost a lot of money, took up a whole lot of space, and when full weighed in at 330 pounds, costing me even more money for every mile I drove.

"Yeah, but only 10 gallons! You must have to fill up every few days!" is a comment I often hear, but when I tell people how long 10 gallons can last me they don't believe me. I know they don’t, I can see it in their eyes and in that condescending "whatever you say" way in which they terminate the conversation, but it’s true non-the-less. 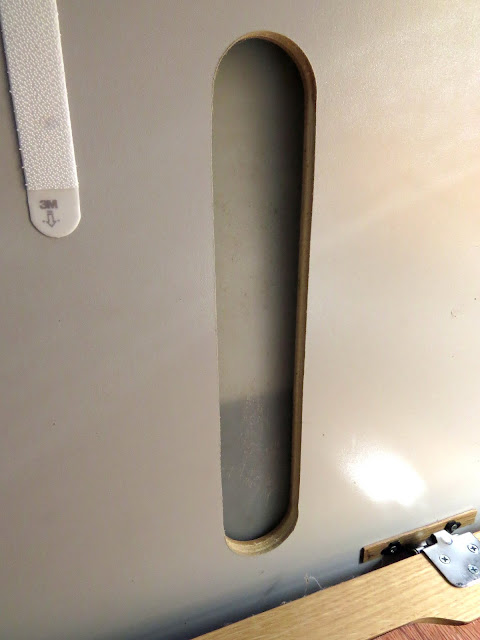 I recently took this photo showing the level in the potable tank when I got back home from a trip. I left with a full tank, didn't refill at any point along the way, and this is what I came back with. I recon that's about a third of a tank left, but to be conservative let's call it a quarter tank.

It was a 15 day trip but let's also not count the 5 days I spent with Mom and family because I wasn't cooking for myself those days. So we'll ignore them, even though I was still brushing my teeth, hitting the pits, cracks and dangly bits, and took a couple of my sink-showers during those five days. (I took two "real" showers at Mom's because – well, mothers worry.)

Another mitigating factor I also need to point out is that, with the exception of hot tea once in a while, made with water from the tank, I pretty much exclusively drink water, no sodas, no coffee, and I carry 4 gallons of purified rainwater, the same thing I drink at home, for that. In addition the toilet in The Van is a portable unit with its own water supply.

Anyway, given those parameters, that means that in 10 days I went through 7.5 gallons of water for cooking, cleaning up, and personal hygiene.

How the hell is that possible!

Well there's only one of me so cooking uses a minimal amount of water. To wash dishes, which I do once a day, hiding dirty things under the sink-cover in between, I put a drop or two of soap into my sink along with a quarter-inch of cold water followed by another quarter inch of hot water from the kettle (I am an advocate of small sinks in RV's as it doesn't take much water to fill them a half-inch or so, and dishes don't have to be swimming in water to wash them.) and then wash the dishes with an 18X18 micro-fiber towel. The kind that will suck up and hold about half the water in the sink but then hand-wring nearly dry. Then I dump the wash-water, stack the dishes back in the stoppered sink, and rinse with scalding water directly out of the kettle.

By planning the rinse sequence this too only takes a bit of water. Dribble a little water over the larger bits like pot-lids, being careful to keep fingers out of the way to avoid cooking them, while letting the dribbled water run down into the bowl or mug the utensils are stacked in, swish the forks around then dump the bowl/mug into the pot it has been sitting in and swish it around again, unless I used the cast iron skillet which just gets a wipe-down then a polish with a drop of oil, all before drying everything with yet another micro-fiber towel. (The bowl is for the salad and I eat right out of the pot so no plate. OK, don't judge me! I like my food hot and both my cast iron skillet and heavy-bottomed pot hold the heat well.) The used rinse water in the sink, cooled off enough by now to prevent any serious burns, is then utilized for a final wipe-down of the counters and backsplash and finally the sink itself.

As always when using the kettle, if there's any water left in it when I'm done, I leave it there for next time rather than waste it by dumping it out.

To brush my teeth I put between 1/2 and 3/4 of a cup of water (I had to go out and measure this just now) into a glass, actually an old-fashioned tin camp-cup I've had since I was a kid, swing the faucet out of the way, and use what's in the cup for rinsing me, my toothbrush, and the sink.

Baths – well frankly I think baths are just disgusting, even if they were possible when on the road, which they really aren’t. Showers are nice, but while we’re still being frank, I find them over-rated and can get along without just fine. (I'm not even going to get into a discussion about the farcical fallacy of trying to cram a usable shower into a small RV!) Even when they are available, and clean enough to not make me cringe, and not swarmed by a bunch of the noisy, 15-minutes-minimum-of-wasting-water-or-it's-not-a-real-shower, crowd, and not too much of a hike away, (I like to lurk in the further reaches of a campground) I still find them to be a hassle compared to my sink-showers.

What the hell is a sink-shower?

Pretty much the same as washing dishes, except I use a dedicated set of micro-fiber towels, one for washing the other for drying. And instead of dish-soap I use a few drops of a no-rinse body bath.

Same procedure for filling the sink with a half inch or so of water, though I often skip the hot water part of the formula. (A little shock to the system is good once in a while!) Then I drop one of the towels in, let it get soaked through, wring it partway out, and start washing, wringing and re-dipping as I finish each ‘part’.

It helps that I keep my hair zipped off with the shortest foot on the trimmers because it’s a whole lot less hassle that way, so “washing my hair” consists of scrubbing my head with the towel just like the rest of me. (And I haven't owned a brush or comb in decades.) 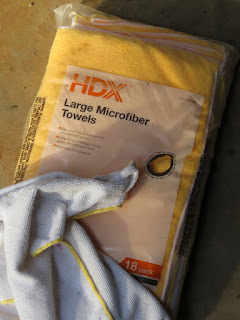 And this is clearly TMI, but when I get down to – you know – the output end, I use a disposable wipe and toss it, (I hope we all know by now that anything like this marketed as disposable or flush-able should absolutely NOT to be thrown into the toilet!) to keep any sort of potential contamination away from my wash-towel. Though, since they are light, small, and inexpensive, I carry a whole stack of these towels in The Van and use them for everything, dish washing, me washing, van washing, window cleaning, wiping up in the shop, etc., and rotate them out to the laundry bag frequently.

It takes less time for me to complete a sink-shower than it did to write about taking a sink-shower, and when I’m done I’m already home without having worked up a sweat or covered my feet in grit from the hike back.

Anyway, back to the original point of this post, it’s not like I’m really trying to conserve water when I’m out there with The Van, it just comes naturally. (At home I also use a cup for teeth brushing and only turn the shower on when wetting down and rinsing off.) Maybe in large part because as a kid I tent-camped with the family all the time and it was me and my brother’s job to lug military-style jugs (Cheap at the surplus store) of water back to the campsite from the hand-operated water pump, so being careful with our water was just part of what we did, just like never walking through someone else’s campsite and making sure to use our inside voices around the campfire.

So, less than a gallon of water a day? No problem. Really!