It was a bit wet today, all day, but I girded my loins and worked my way up the north shore of Lake Superior.

At the northeast, or as the locals call it, east side of Duluth, SR61 splits into the ‘expressway’ route and the scenic route. Guess which one I took. . . The whole road layout through this part of the city is a little strange though. I35 comes up from the south, drops 500 feet over the bluff down to the shoreline and flys/burrows a bee-line path through downtown Duluth between the tracks and lake on one side and the city rising up the hills on the other, (With less than a dozen blocks between lake level and the heights above, Duluth is one steep city!) but then just ends right there on the edge of downtown at a traffic light where it dumps into SR61. For the next 4 miles SR61 is a two lane road with a 30 mile per hour speed limit wandering through a residential area along the lake shore. On the lake side are really big and fancy houses, one after the other, on the other side are older 1200 to 2000 sq. ft. frame houses like you’d see in any typical older neighborhood in a Midwest town. It’s not until after threading through all this that SR61 splits between its two versions, and by the way, the ‘expressway’ version isn’t, it’s just a 4 lane divided highway. Regardless, it must be a real pain during rush to either live along that 4 mile stretch or have to drive it.

So, after threading through that residential street with plenty of stoplights and tons of driveways SR61 splits and, predictably,  the scenic route runs along the shoreline with views (If it wasn’t quite so foggy!) of the lake, lakeside homes and resorts, and there's plenty of pull-overs where you can get your feet wet along the rocky shore, assuming you're immune to the effects of submerging your feet in ice water! 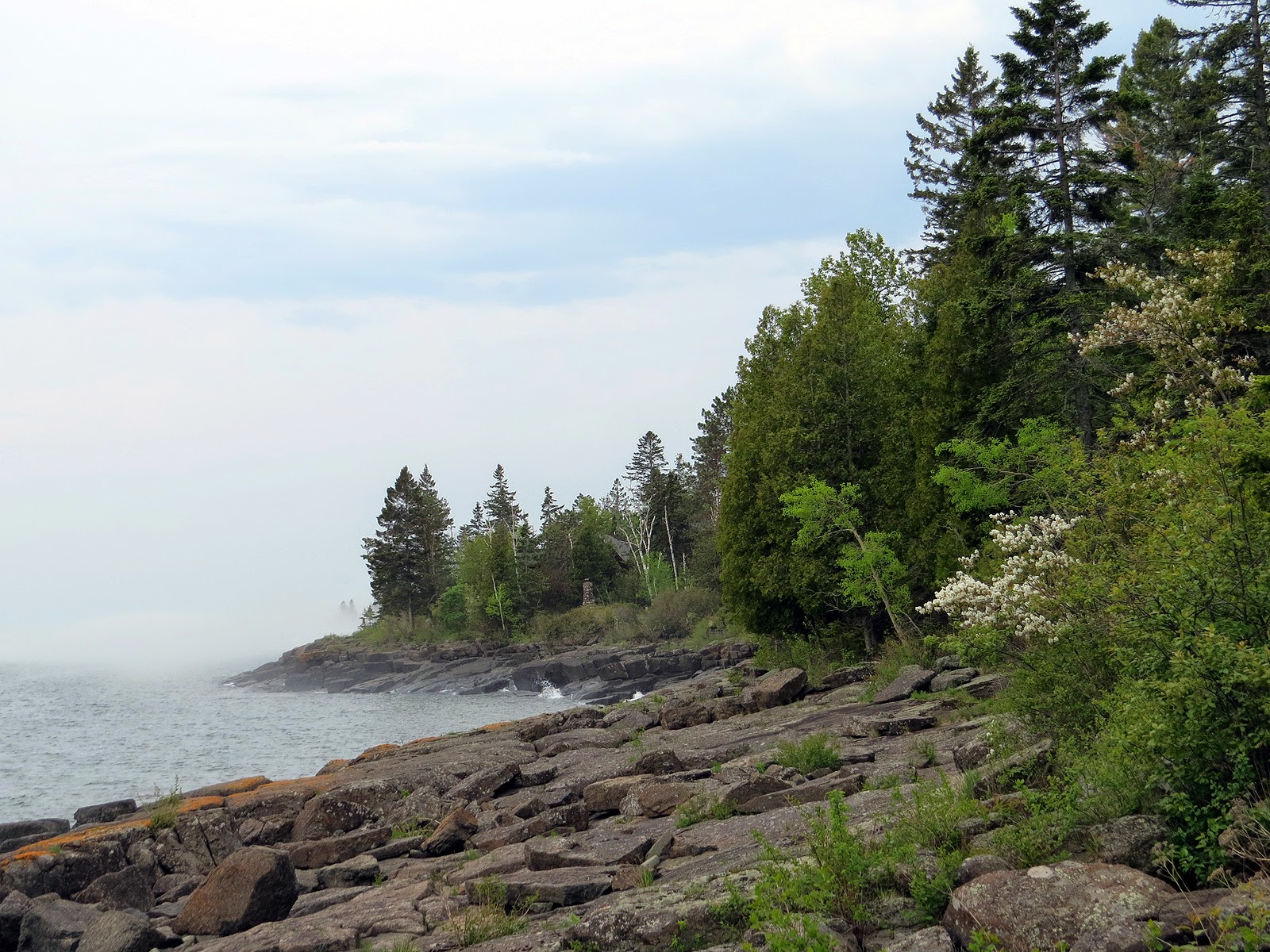 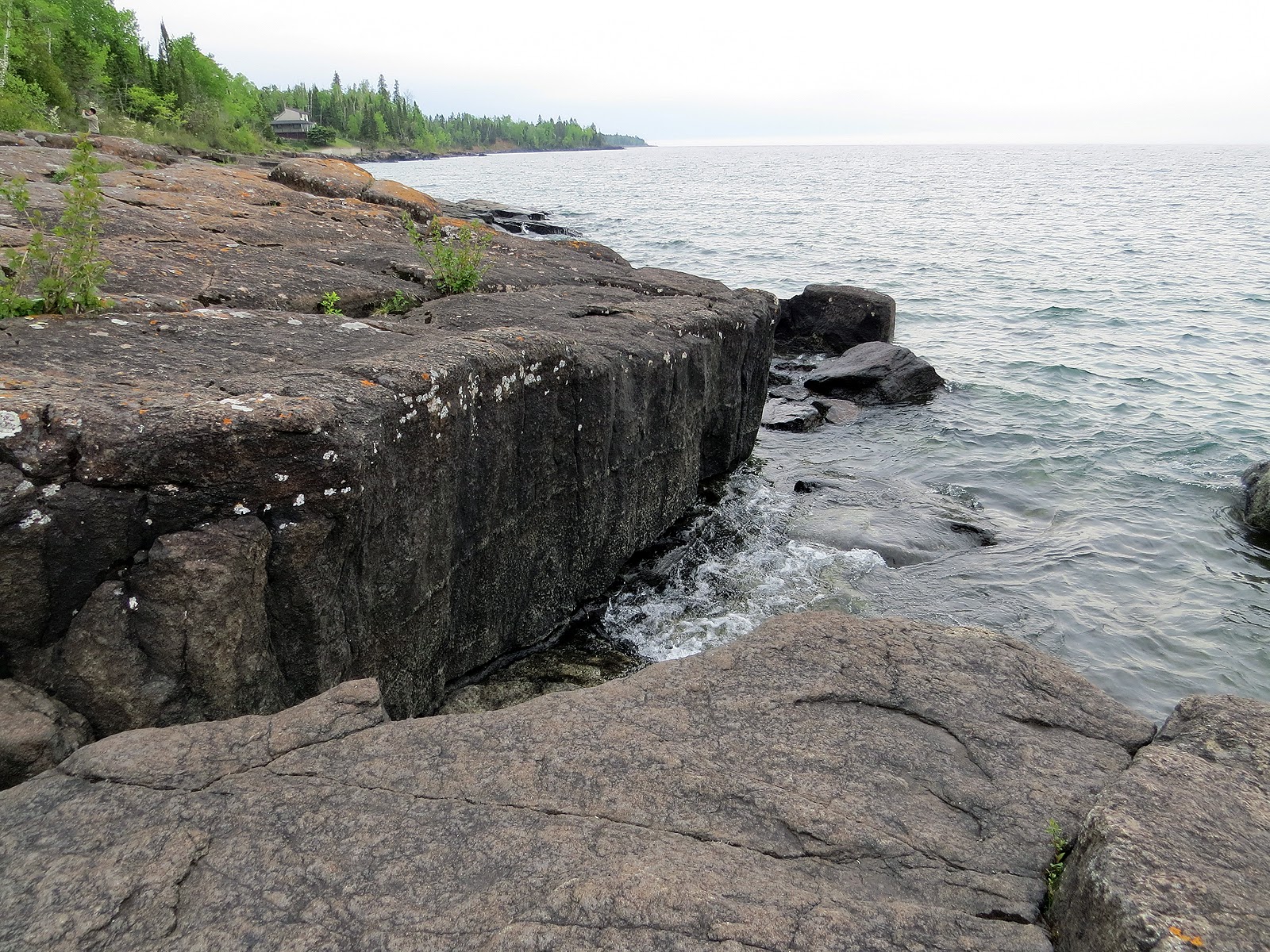 For me Lake Superior has always been a slightly intimidating place. Remote, icy waters; really deep icy waters; legendary storms and history in and around it that will curl any boy's hair. On the north and western shores, where prevailing winds blow any sand on into the lake, the shoreline is predominately dark and rocky and the ancient granite kind of thrums with its own energy collected over millions of years. (OK, this is what happens when you spend too much time alone standing on a rocky, fog-bound shoreline knowing that the vast lake is lurking out there just beyond vision, just waiting to rise up and slap down the careless and unwary. . .)

About 25 miles up the road is the town of Two Harbors. Named Two Harbors because - well - there's two harbors. The town sits on a peninsula between Agate Bay and Burlington Bay. This is iron ore country and Agate Bay is protected by a couple breakwaters and dominated by large ore docks where loads are transferred from trains to ships. Burlington Bay is much less developed, out on the bay itself anyway but it looks like a brand new campground is going in over there on the edge of it.

Back in the dark ages; maybe even before the light bulb was invented; I was in the military and stationed in Virginia with a guy from Two Harbors. His dream upon getting out of the service was to go back home and start a business building custom furniture. I was thinking of this as I working my way down 7th avenue towards - well - the harbors, when I passed a workshop/storefront called Original Furniture. And I wondered. . .

Two Harbors being Two Harbors, there was plenty of room to pull over and park. Unfortunately (Maybe fortunately for anyone who might have been in there. . .) the place was closed so I couldn’t go barging in, not remembering his name and certainly not what he looked like, blindly asking if anyone associated with the place was maybe in the military a long time ago.

Foolishness thwarted, back in the van and continuing on. . .

There's plenty of parking down by the harbor so I did, park that is. There was a freighter being loaded at one of the two operating ore docks and the Corp of Engineers had some work barges set up at the end of one of the breakwaters where they seemed to be reinforcing it. (See! What did I tell you about the lake just waiting to rise up and slap something down!)

I walked out on the breakwater to get a closer look at both operations, the freighter loading and the breakwater fixing. A couple times fingers of thick fog blew in from the lake, the 40 degree lake. Got a bit chilly for a bit there! Fortunately I was smart enough to be wearing an extra shirt under my rain gear. (I know! Karma getting me for all the bitching I was doing about the heat just a week or so ago. . .) 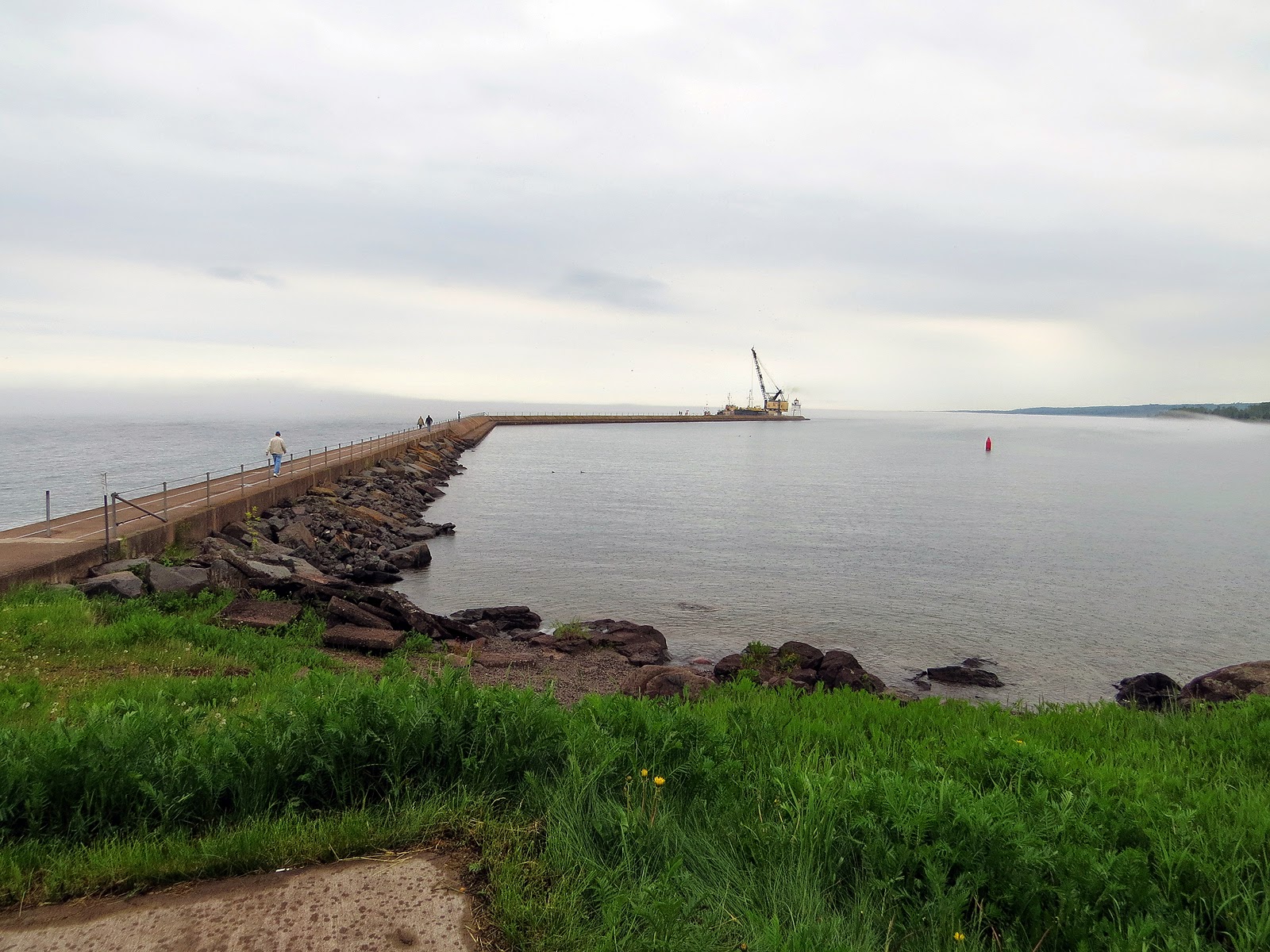 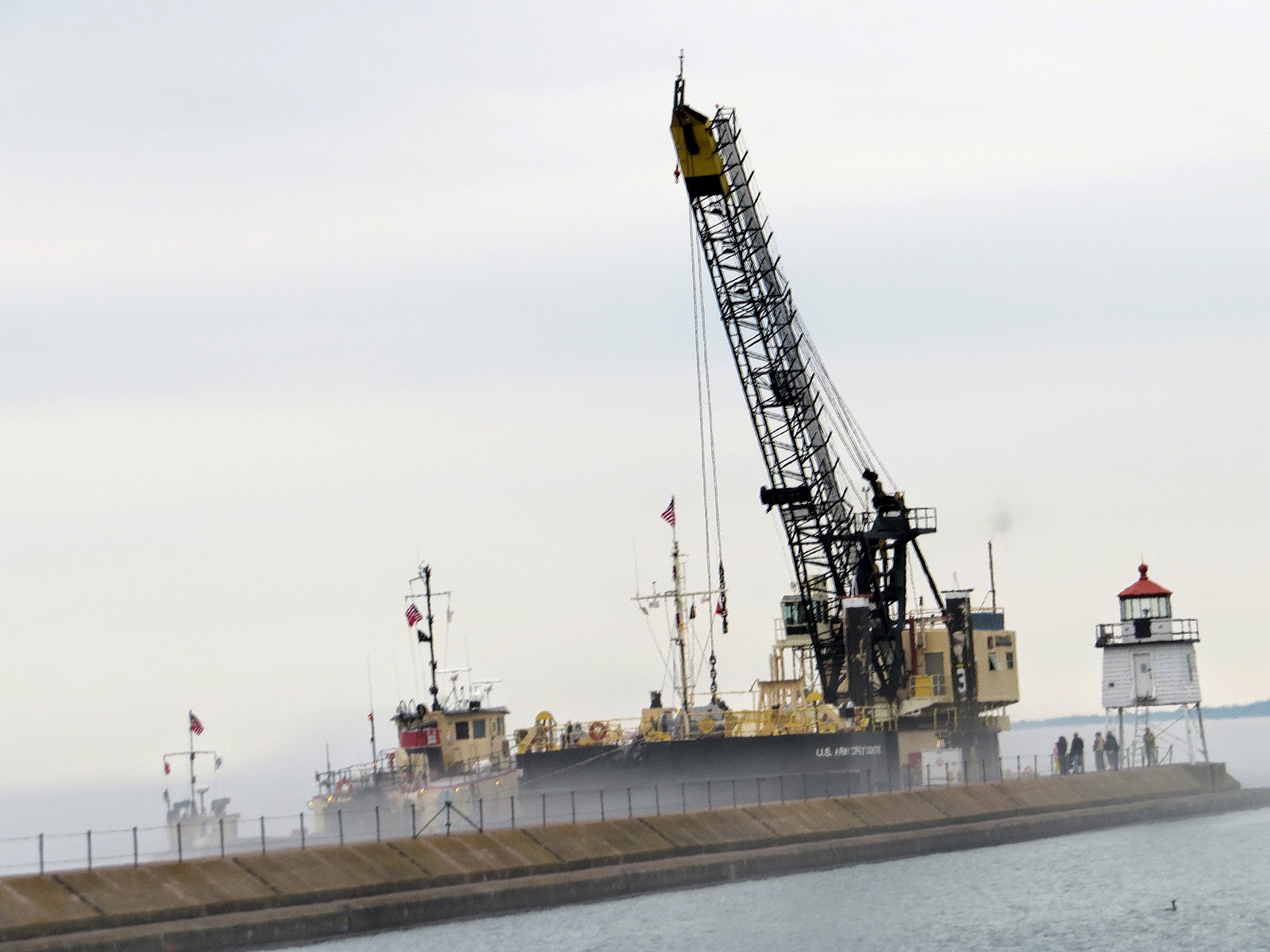 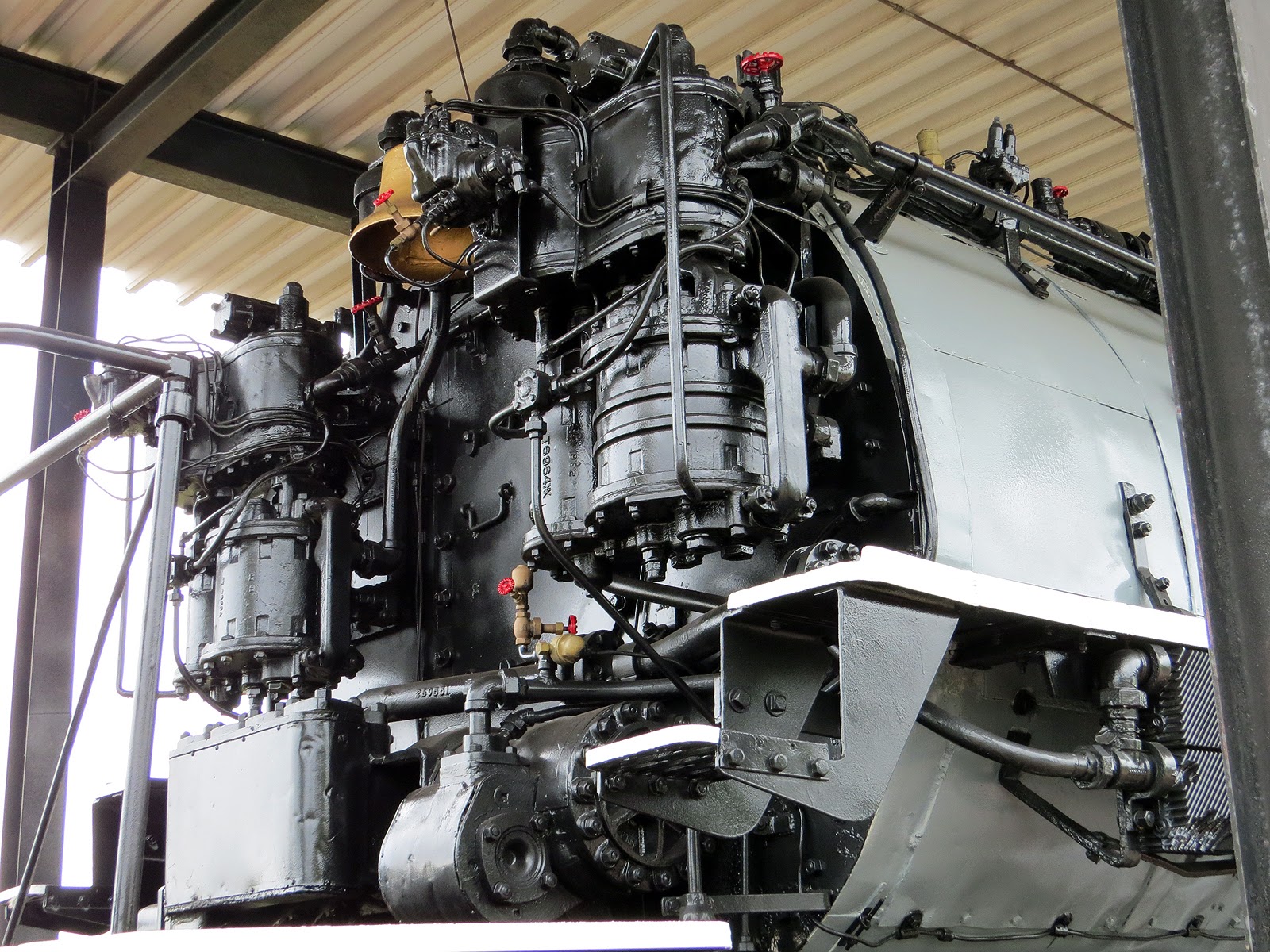 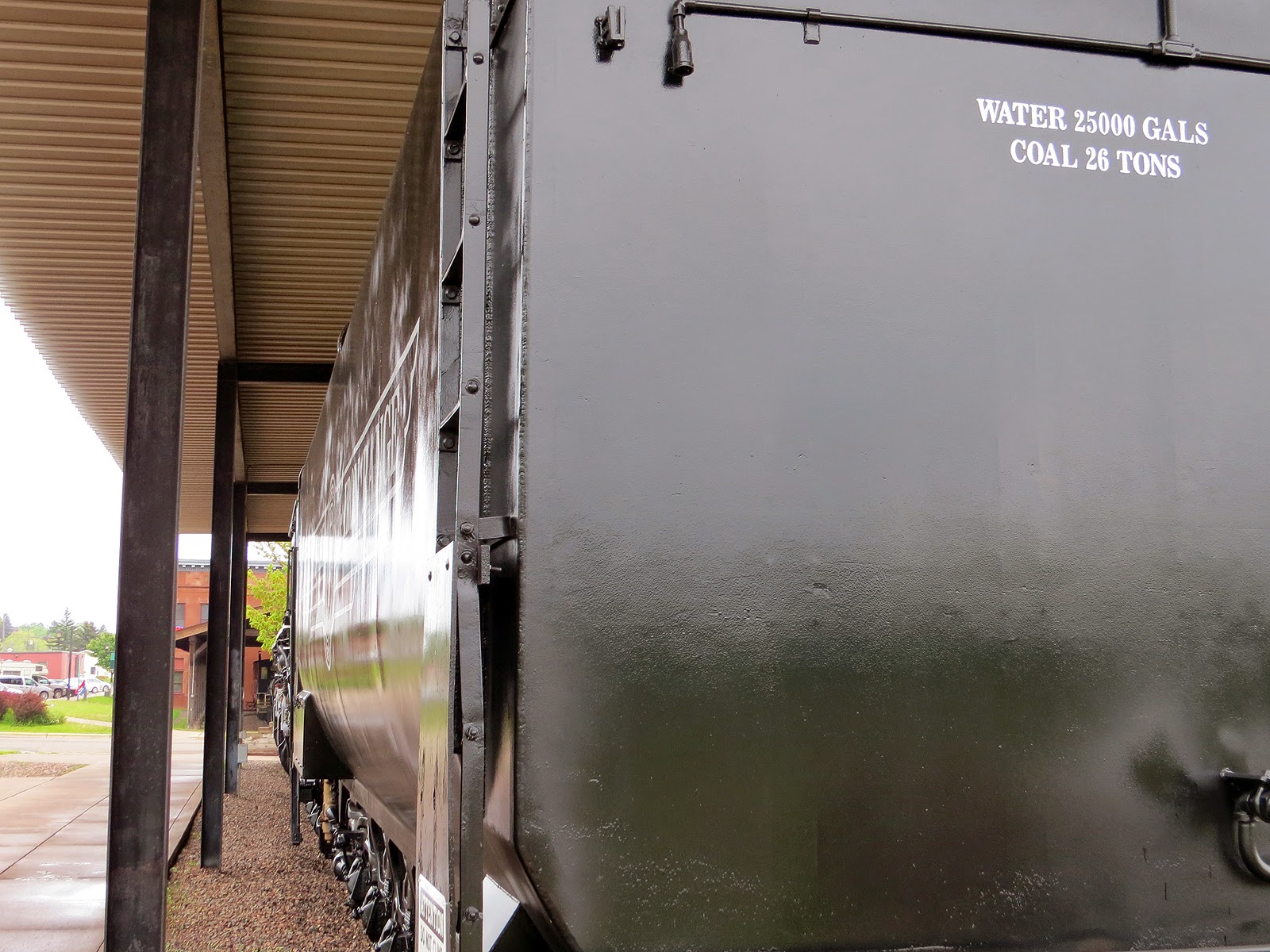 After getting thoroughly damped and chilled out there on that skinny bit of stone and concrete that's supposed to keep the lake in check, I headed for the trains. I mean, who wouldn't?! It's trains for crying out loud! Two Harbors pretty much exists as a town because of the trains bring ore down from the mines in the interior to the ships in the harbor and they have an outdoor display of the first and the last steam locomotives used on that railroad. The depot has also been preserved and turned into a small museum/gift shop, more shop than museum in my opinion, but then I might be biased. 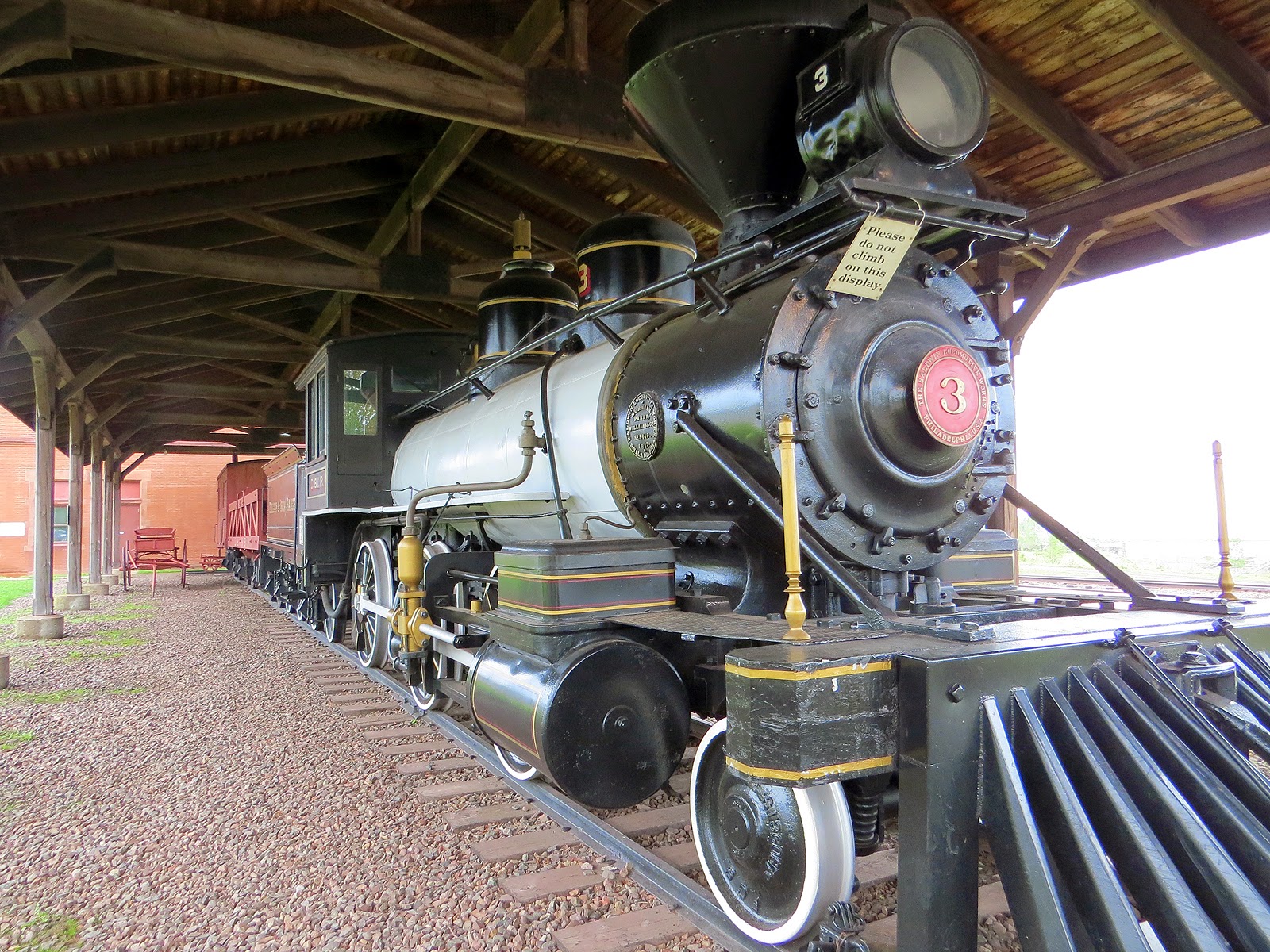 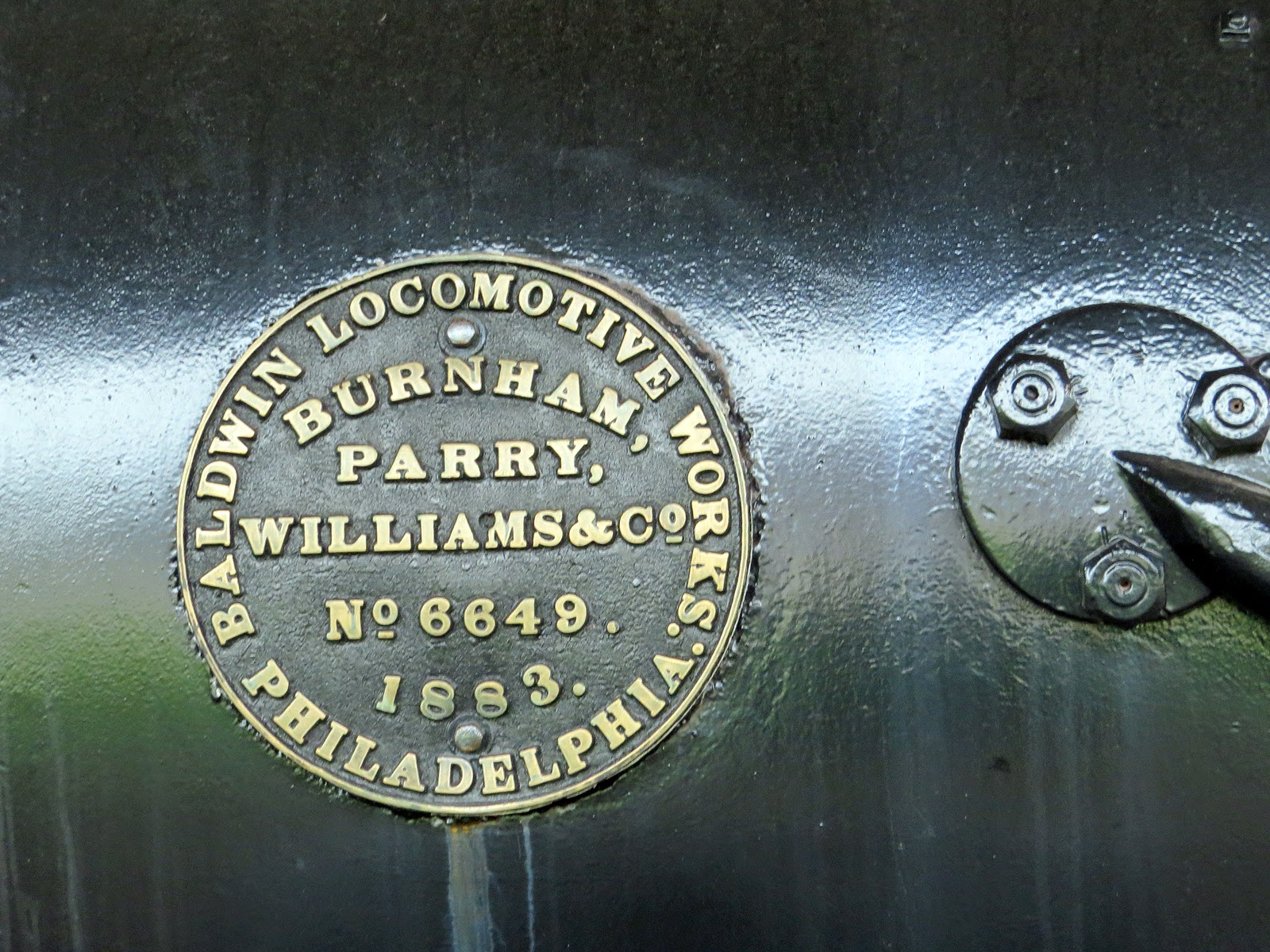 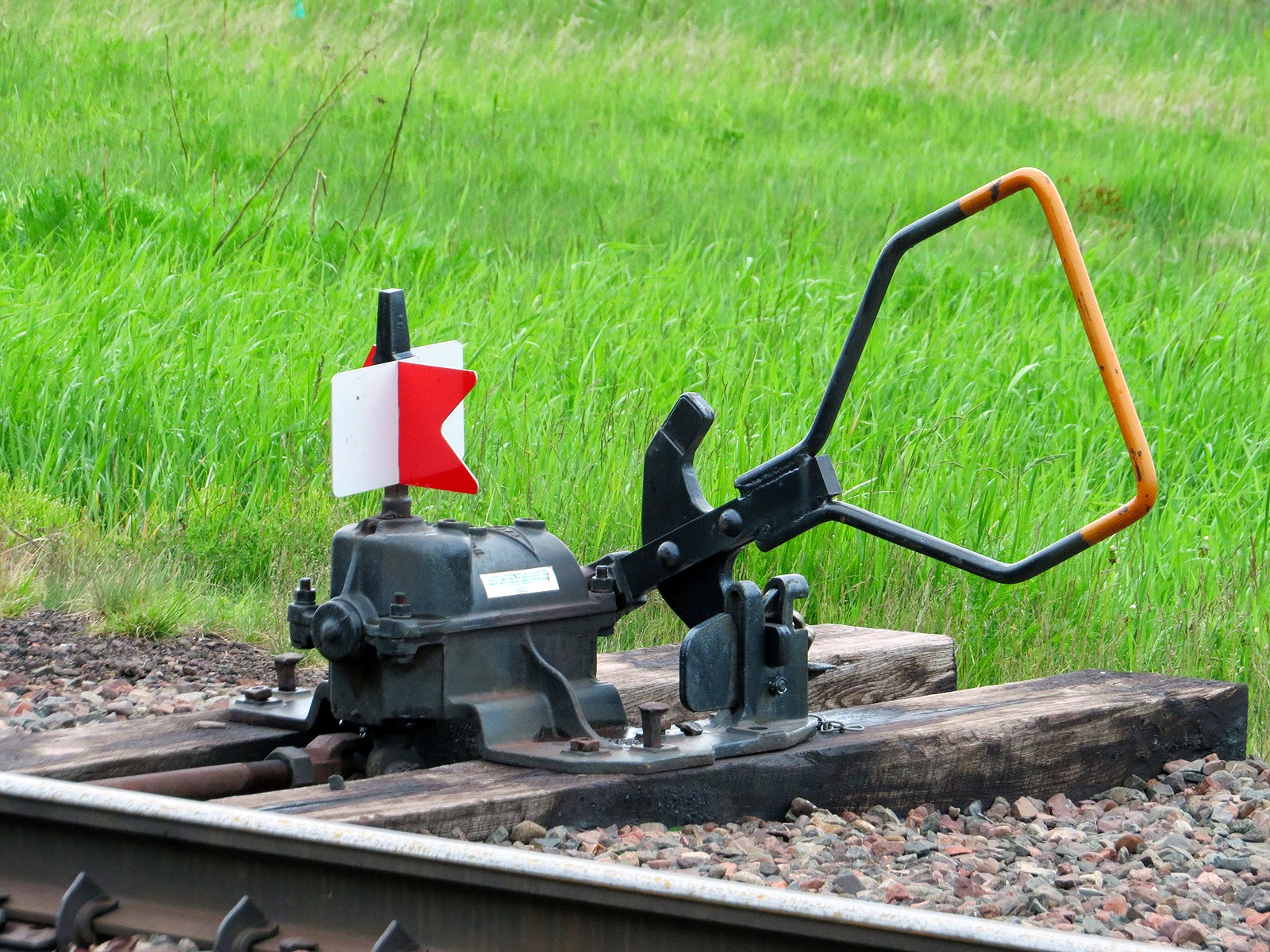 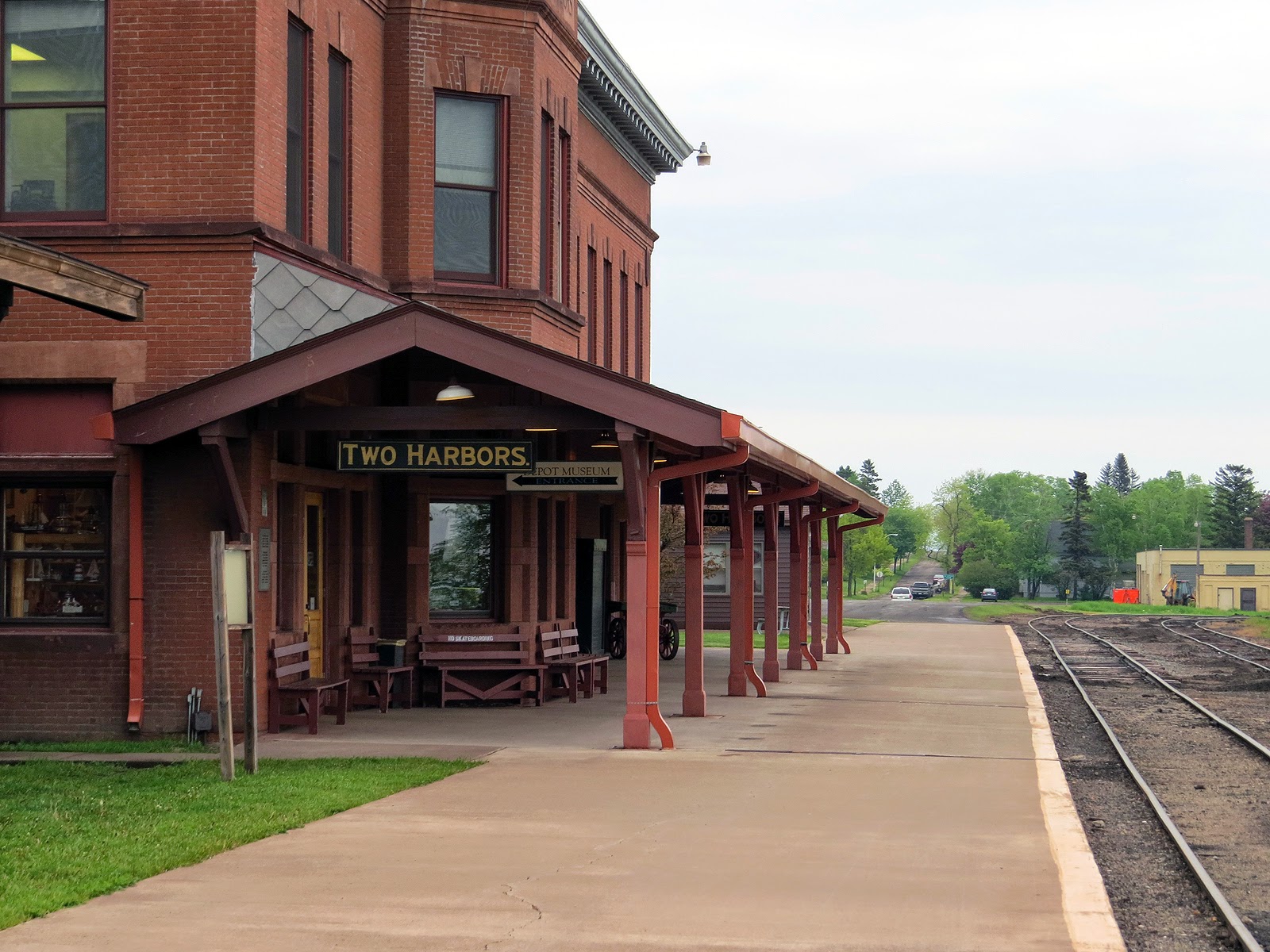 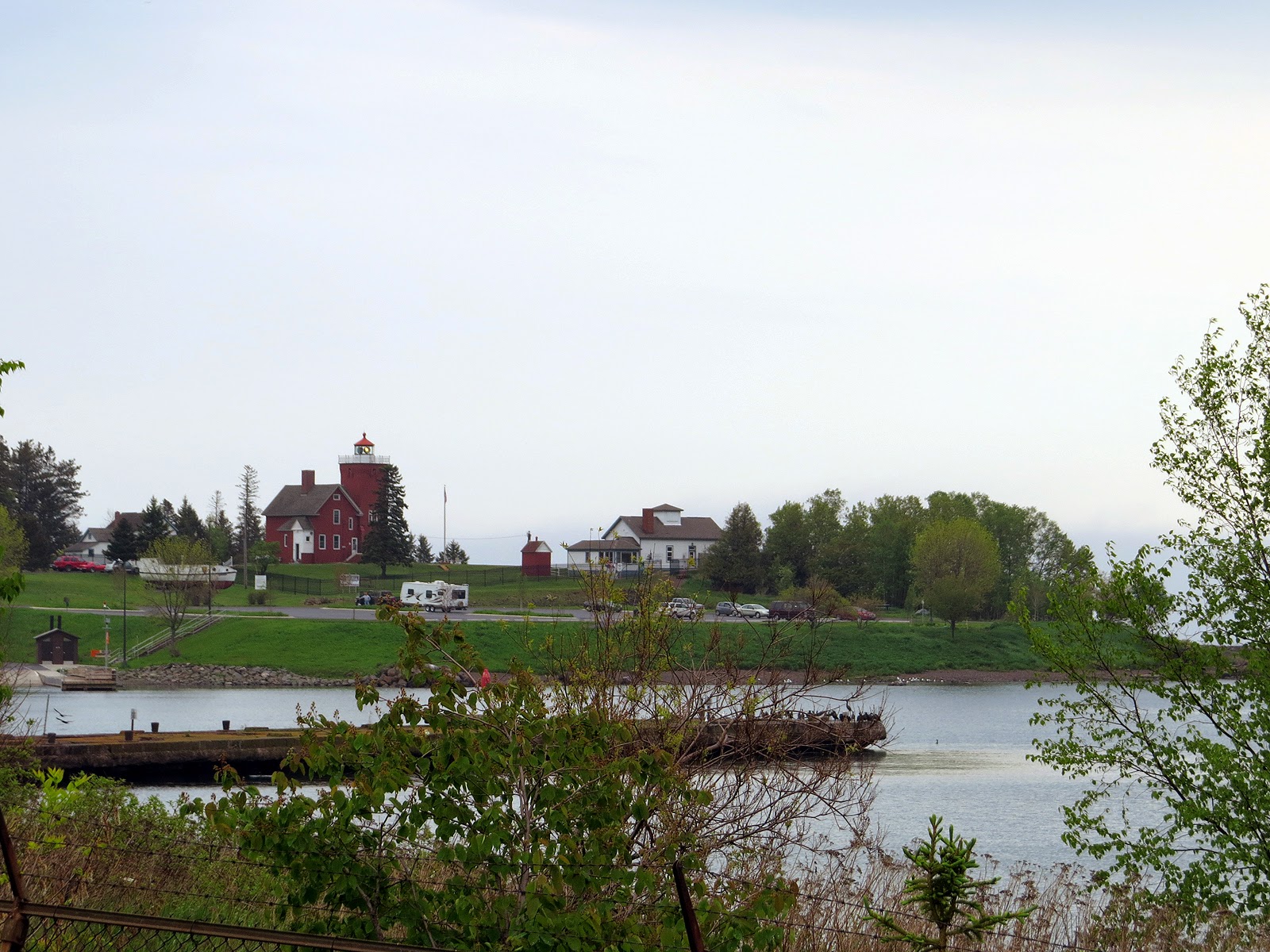 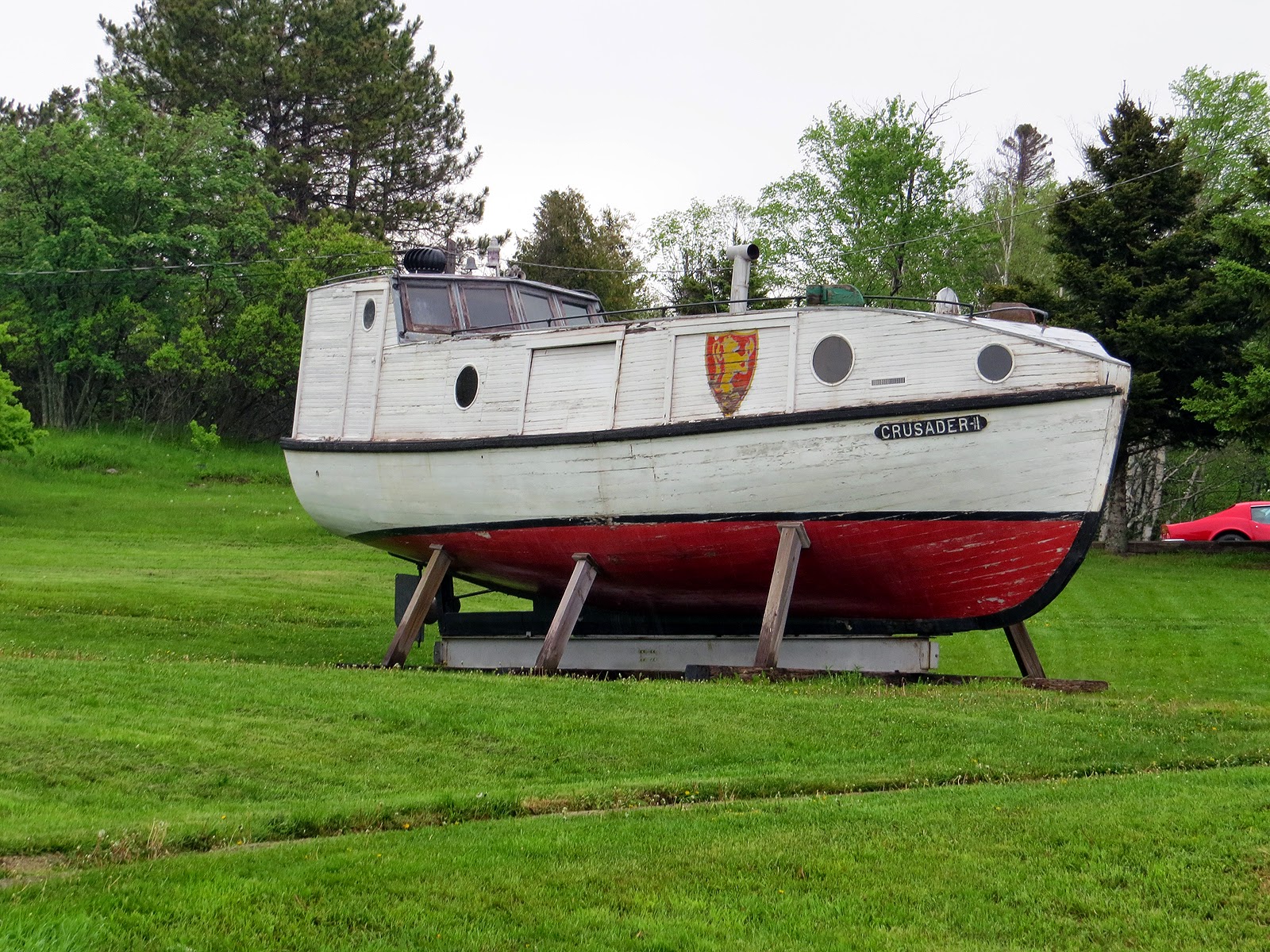 I was in the service with another guy who came from Brimley Michigan at the other end of Lake Superior and his father fished commercially from a boat just like this one. Does the fact that it's completely closed in and the nets are worked from the large hatches in the sides give any hint of what it can be like out there on the lake??? 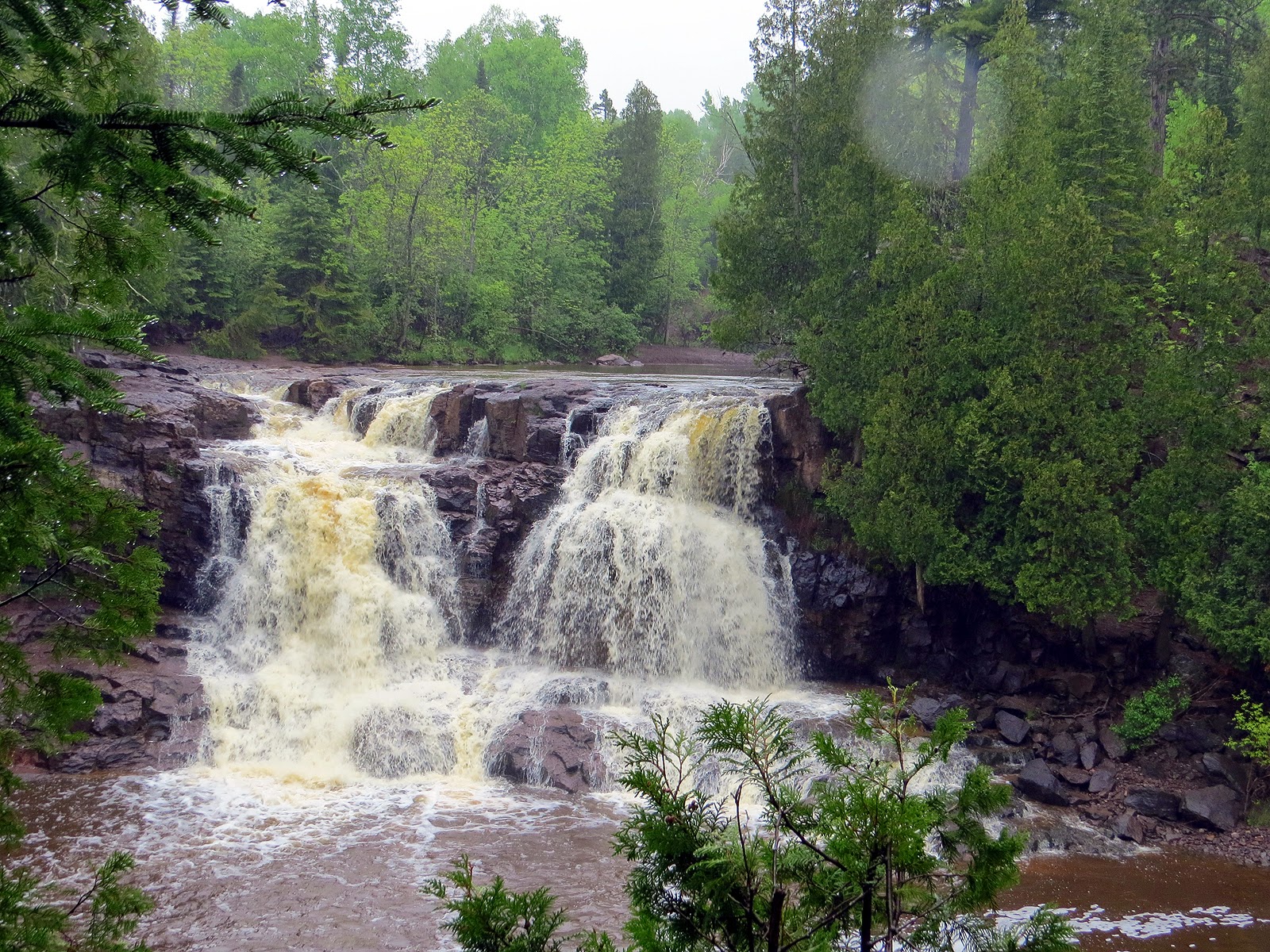 Another 12 or 13 miles on towards Canada is Gooseberry Falls state park. This is where the Gooseberry River drops over a series of hard rock ledges as it works the last couple miles down to the lake. There is an interpretive center tucked down there between the road and shoreline, but the big attraction is the falls, reached by following a trail up under the highway bridge and back inland to the rock ledges.

By now the rain had really set in but I still managed to get in a little hiking/ambling, tucking myself under trees or the bridge during the worst of it, though it did keep me off some of the trails further inland as they snaked their way up and down steep and now very slippery rocks and exposed roots. Not the time or place to get hurt! It also kept my camera, which is allergic to large amounts of water, in the case so I don't have much in the way of photos of this area.

As I write this, back at the campground for the night, the rain continues, sometimes pretty heavy.