OK, so, I was a bit stiff this morning but not near as bad as I expected, though I did feel it after a few hours behind the wheel when I climbed out for pit stops. Had to work a few kinks out then!

Ignoring the interstate, and trying to ignore the heat, I headed north through the middle of Oklahoma on a mix of state and US highways. At one point I crossed the Washita River in the Tishomingo Wildlife Management Area and that was a pretty cool looking spot in the midst of OK farm & ranch country, but I was trying to get north in the hopes of leaving some of the heat behind. Paradoxically, (Sounds better than foolishly.) later I ignored the bypass and drove the slower route through downtown Ada. I was a little surprised, pleasantly surprised, that a town this size has managed to keep its downtown pretty much intact, but the relentless sun kept me moving.

I pretty much stayed behind the wheel in the air-conditioning doing the windshield-tourist thing as my route north rolled through several little towns, bypassing Oklahoma City and eventually rolling on into southern Kansas.

The day started out reasonable, not cool but not too hot, but somewhere along the line the temp jumped up to near 100, probably driven by the south wind that chased me across the state and into Kansas. It's around 8:30 now and has cooled down to the low 80’s which is feeling pretty good right about now, but not good enough to plan on hanging around here tomorrow and checking out the lake completely surrounded by the El Dorado State Park that's sitting just a mile or so north of me here just outside El Dorado KS. (Boy! that was a awkward sentence, but I'm too tired to go back and fix it.) Instead the plan is for an early start to head up to the Tall Grass National Preserve for a second try at the trails there in the morning. (Last time I was there it was raining. . .) 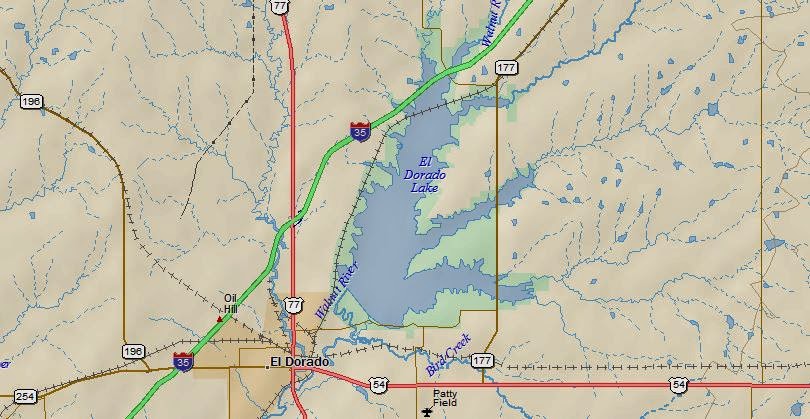