And now for some romance.

In the past month or so I've adorned the lady with a bit of bling, painted her, added some garters and even threw in some wicked high heels. I think it's about time to get down to some romance!

I'm talking about the romance of staring into the flickering light of an open flame, of chilling out and loosing yourself in the eternal dance of wood, fire and smoke, of leaning in and discovering your primordial self in the play that most ancient of elements. Not to mention bringing back all those memories of campfires past with talk and companionship and jokes and shenanigans and s'mores and eyes growing heavy despite the uncomfortable chair but somehow you're still not quite ready to let the day end.

As I grew up campfires were a mandatory part of the camping experience. No matter that my brother and I scared the crap out of Mom every time we wielded an axe nearly as heavy as we were in an attempt to turn long logs into short ones and short ones into kindling, or that Dad regularly singed all the hair off his left arm by using just a little too much starter-fluid on that stubborn pile of too-large kindling, (My brother and I weren't stupid. Oh sure, we often did stupid things, that's just encoded in the male genes and there's nothing you can do about it, but we weren't stupid, at least not enough to try making really small kindling with a really big axe!) Despite the trials and dangers and hassles and choking smoke that followed wherever you moved; when the sun went down the fire was lit.

Now days the desire is still there but the reality is, it's getting more and more difficult to find places that allow ground fires, and when you have the fortune to find such a place all the good wood is gone but you're not allowed to bring in your own for fear of spreading some disease or bug or something so you pay 10 bucks for a 5 pound bundle of 'wood' that consists of 2 decent pieces strapped together with a bunch of barky slabs. On top of that, as a solo traveler I'm just not motivated to build & light, care & feed, and sit & enjoy a fire in the evening; but the pull is still there.

I've tried to appease the desire with an evening candle ensconced (More or less safely.) in a ceramic incense burner there on the counter in the van, but when it wasn't making a waxy mess all over the counter it was still an open flame waiting to be knocked over, so I gradually got away from even trying, but the pull is still there. . .

Modern electronics to the rescue!

On an almost completely unrelated topic, one day we bought an LED powered candle-sconce to try out in a corner of our house, you know, over in that little niche by the front door. After a few days (Hey, I never claimed to be quick on the uptake!) I got to looking at it and thinking maybe I should just abscond to the van with it. Here was just what I needed; a nice, safe way to get the flame-like flicker I was longing for in a safe, compact package. Cold fire for the van! (I'm sure, if I owned a smart phone, that there's an app for that, maybe even complete with audio loop of crackling flames, but I don't, (Own a smart phone.) at least not yet.)

Well the sconce remains in the house and the jury is still out on it's success there by the front door, but in the meantime I ran across some electronic tea-light candles we had picked up somewhere and I got to looking at them and came up with an idea.

So with a little restructuring and a few added bits and bobbles, the van now has her touch of flaming romance. 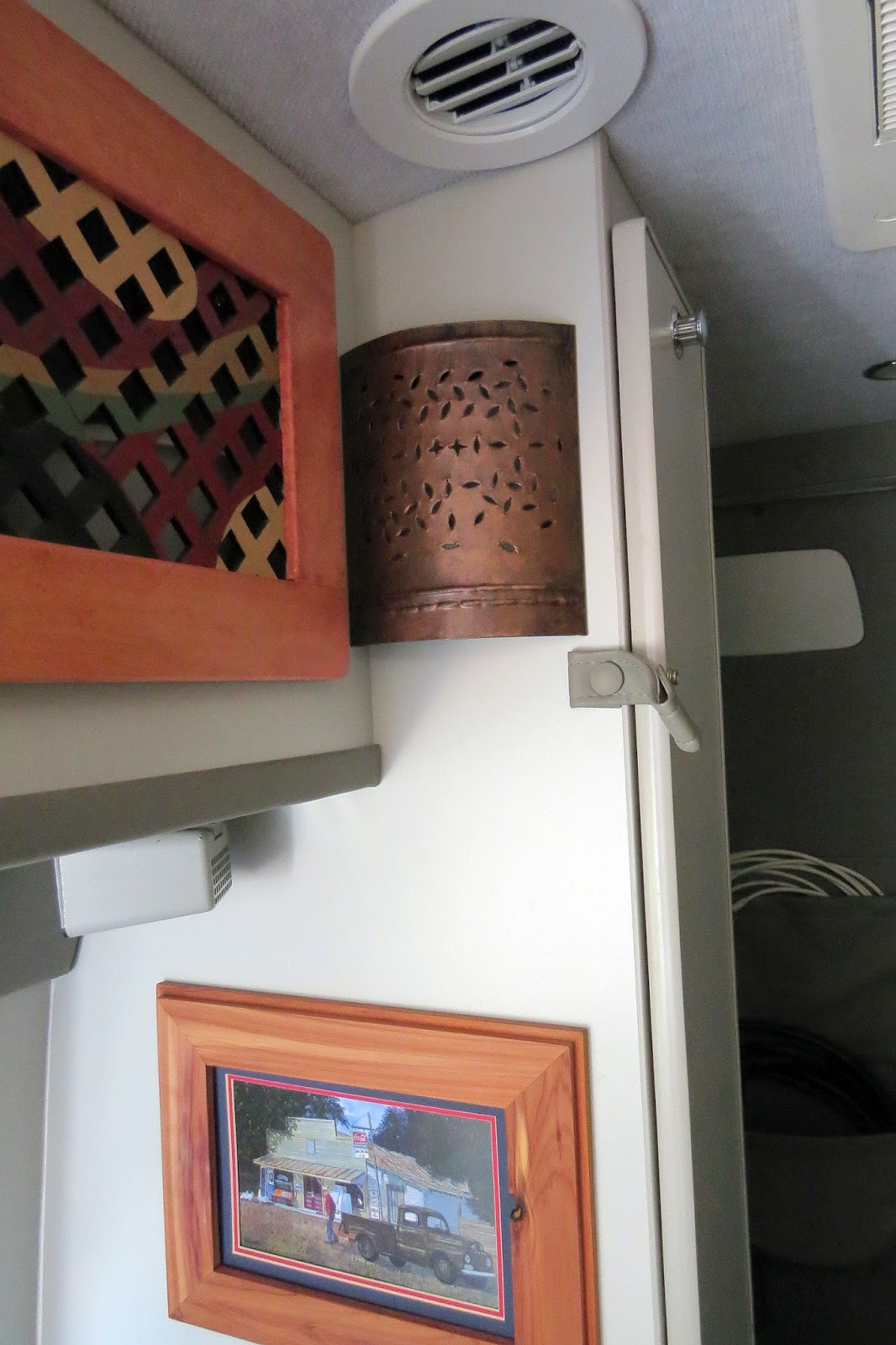 That's it up there above the picture frame, below the AC vent (Which is a bit of useless kit, the vent not the AC) and next to the cupboard door. 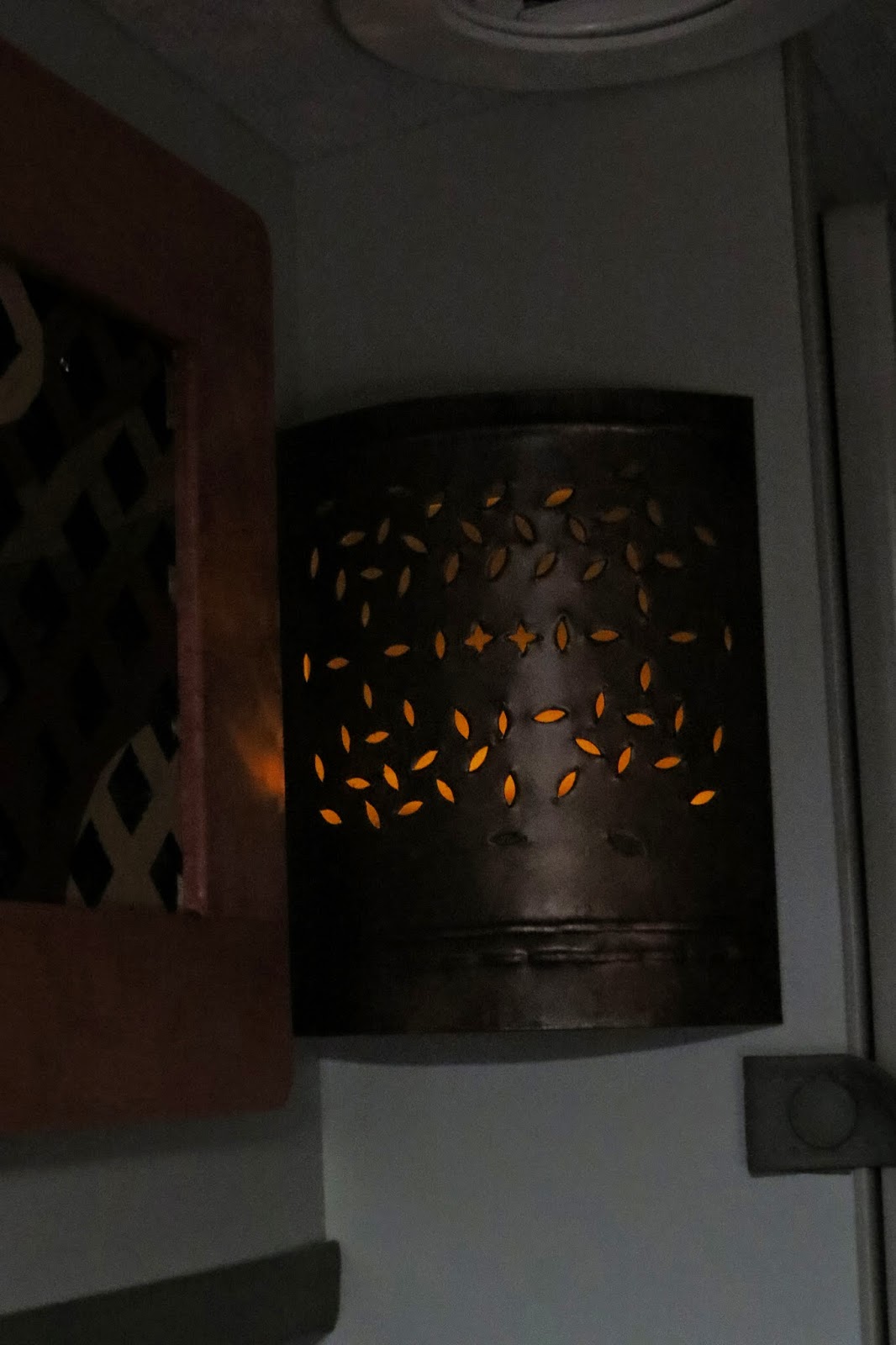 It was pretty much impossible to get a picture with my basic camera that does the finished product justice, but this one might give just a hint of what it adds to the evening ambiance of the van. If you can, try to imagine the light flickering like a candle in a very light breeze back there behind the tin with rays escaping through the holes to create dancing patterns on the nearby surfaces.

There's a total of 4 LED's in there all flickering in sync and drawing less than 1/20th of an amp from the house battery, so I can leave the 'flame' lit as long as I want without worrying about sucking the batteries flat or setting something important on fire.

For a more detailed look at the building of my primordial romance machine check out the entry in my other blog.