Granger and Inks, a tale of two lakes, part 1


OK, the windshield is repaired, the batteries replaced and the new parts for the vent installed; time to go camping!

This first day started and ended with birds. 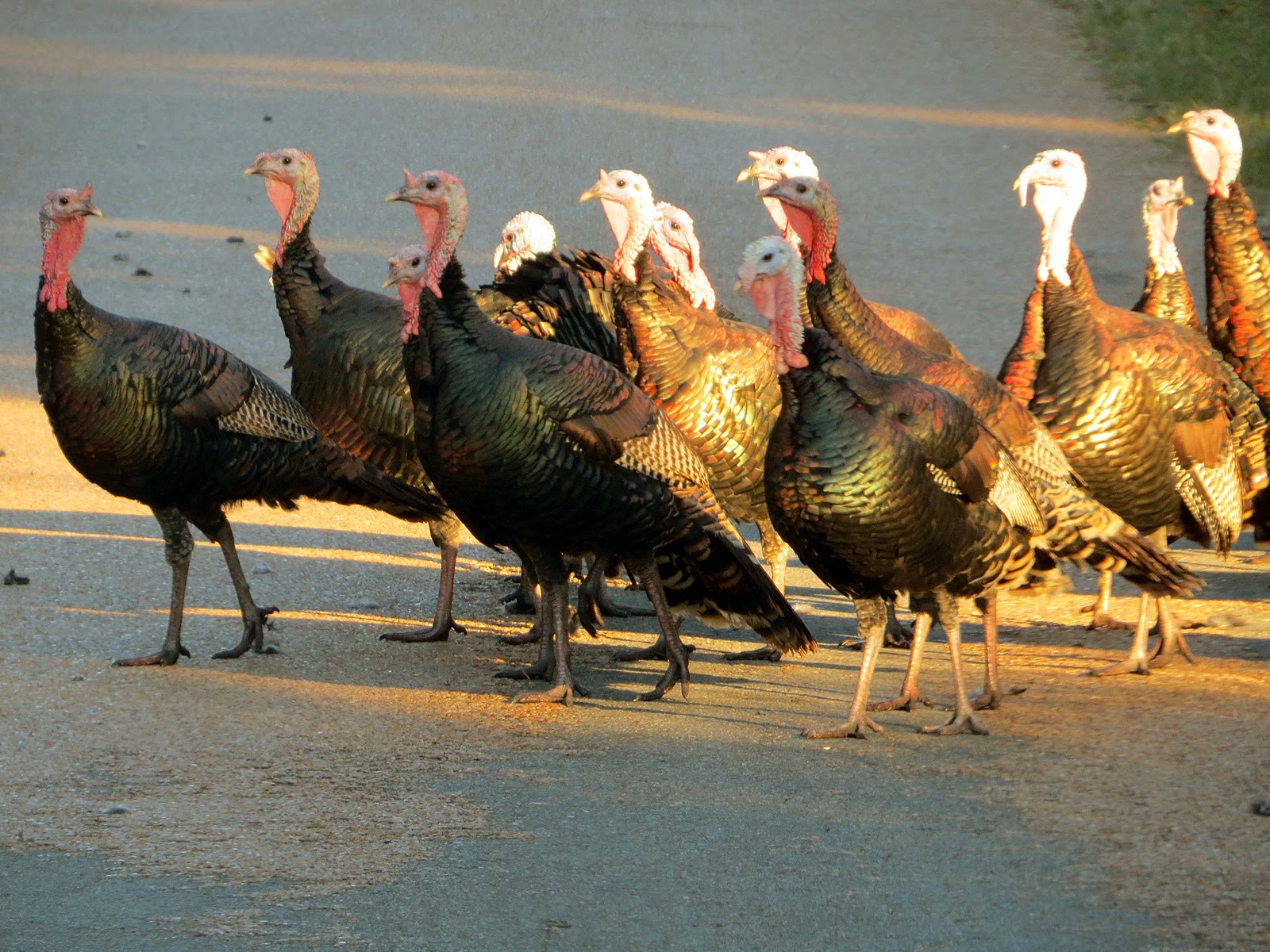 Just a few tenths down the road from the gate, before the van has even had time to warm up properly, I found my way blocked by this flock of turkeys.

They were pretty stubborn and I ended up coming to a full stop. They then kind of moved towards the edge of the road as if to get out of my way, but must have collectively changed their minds. Maybe they were admiring my van. . .

Judging by the blanket of feathers scattered across the road just in front of my bumper, someone else didn't bother to stop, or perhaps even slow down this morning.

The owner of the flock came roaring up on his Gator and the two of us searched the ditches and managed to find the gobbler that belonged to all the scattered feathers. It was sitting up, nested down in the tall grasses (The county doesn't mow this time of year so the seed-heads can mature and drop.) but we couldn't tell without disturbing it just what kind of shape it was in, and being the squeamish sort I was happy to just leave it alone!

I did find it amusing to stand out in the road surrounded by aimlessly busy poultry while this guy complained at length about all the 'city folk' moving out here to the country and roaring up and down the narrow, twisty county roads at 60 MPH with no regard for others.

I guess I should clarify that I don't find fast driving folk, urban or otherwise, amusing at all, in fact if I was in charge there would be a special form of punishment for such blatant recklessness, (And believe me, it's a good thing I'm not in charge!!) The amusing part was that it was only three years ago that this guy and his wife moved out here from the big city into their brand new Austin stone cottage complete with the kind of story-book barn and fancy iron-gate entryway only 'city folk' build. (Full disclosure. We've only been out here about 12 years now so are also 'city folk', especially compared to our southern neighbor who's family has been ranching the land for 3 generations.) 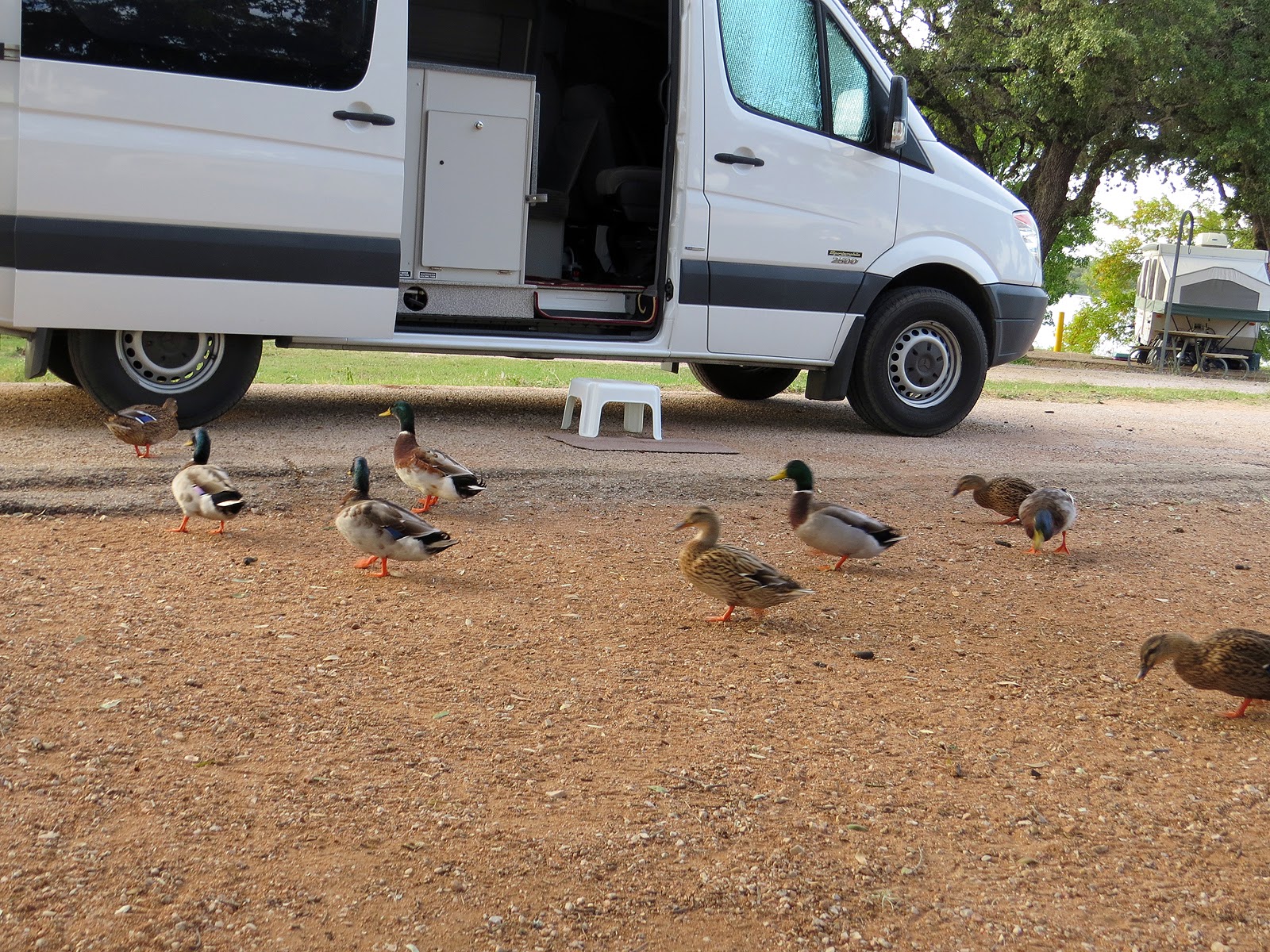 Anyway, that was the beginning of my day. And as I finished it out, sitting under an oak at my campsite in Inks Lake State Park, reading a book in the fading light, I was inundated by ducks.

Based on their behavior over the next couple days this is apparently a daily thing. Every 24 hours or so they come swarming, or rather noisily waddling, in to check out what ever goodies might have fallen out of the tree since they were last here. It was also apparent that as long as you sat still they couldn't care less that you were there in the middle of them. There were several times I could have just reached down from my chair and snatched up a couple dinners worth of fresh duck, but with my fridge already full it just didn't seem like the neighborly thing to do.

In between the turkeys and the ducks I had made a detour to check out Granger Lake. This is a Corp lake a few hours from home. I was here once a long time ago but - well - it was a long time ago, and now I wanted to check out its possibilities visa-vi the kayak. 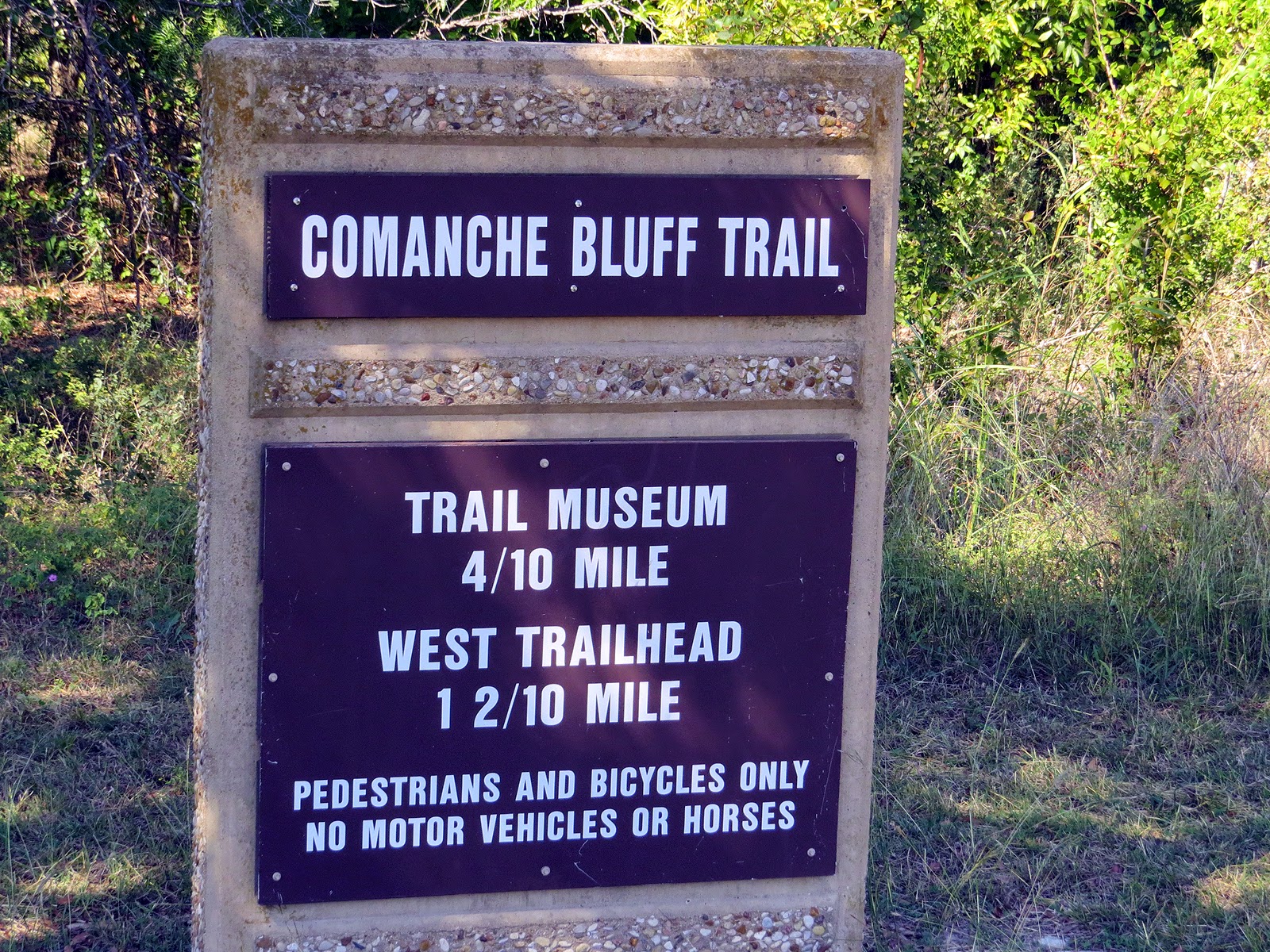 The lake is pretty much surrounded by several Corp parks with the spaces in between taken up by various wildlife management units and there's a 4 or 5 mile trail along the south edge of the lake from which I expected to get a pretty good idea of its possibilities as a future kayaking destination.

Since this was just a passing reconnoiter, rather than pay the $4 entry fee and start my hike at the East trail-head (Pictured here.) I started at the West trail-head where there is no entry fee.

Oh, and by the way; the only hint of a  'trail museum' I could find were the information plaques at each of the two iron bridges.

Unlike when living in the north, where I tended to hibernate during the winter and subsequently suffer through getting rid if the 'winter bloat' as things started to get active in the spring, down here in Texas that process is reversed and it's the summer bloat that gets me.

When I first hit the trail this morning I knew I had a bad case of bloat. It had been two and half months since my last real hike and it was a summer of piddly little projects, few of which required any sustained effort. My pack straps were heavier across my shoulders than I remembered, that initial downhill pitch was tougher than I expected, and climbing back up out of that first ravine had me rethinking this whole hiking business!

But things soon leveled out; not the trail mind you, but my heart rate and breathing dropped back out of 'Oh crap! what's wrong with me!!' territory and back to more tolerable and less fear inducing levels. I've noticed that before, particularly hiking in Alaska where, especially along the fiord-like Turnagain Arm where all hikes start with an epic uphill. By the time I topped that first climb, I would be convinced I was the least fit hiker in the world, but then after another half mile or so everything would settle down and I'd get my legs, and my confidence, back.

Maybe I should start every hike by jogging a few laps around the parking lot before setting out? Wake up the body and prepare it for what's coming. 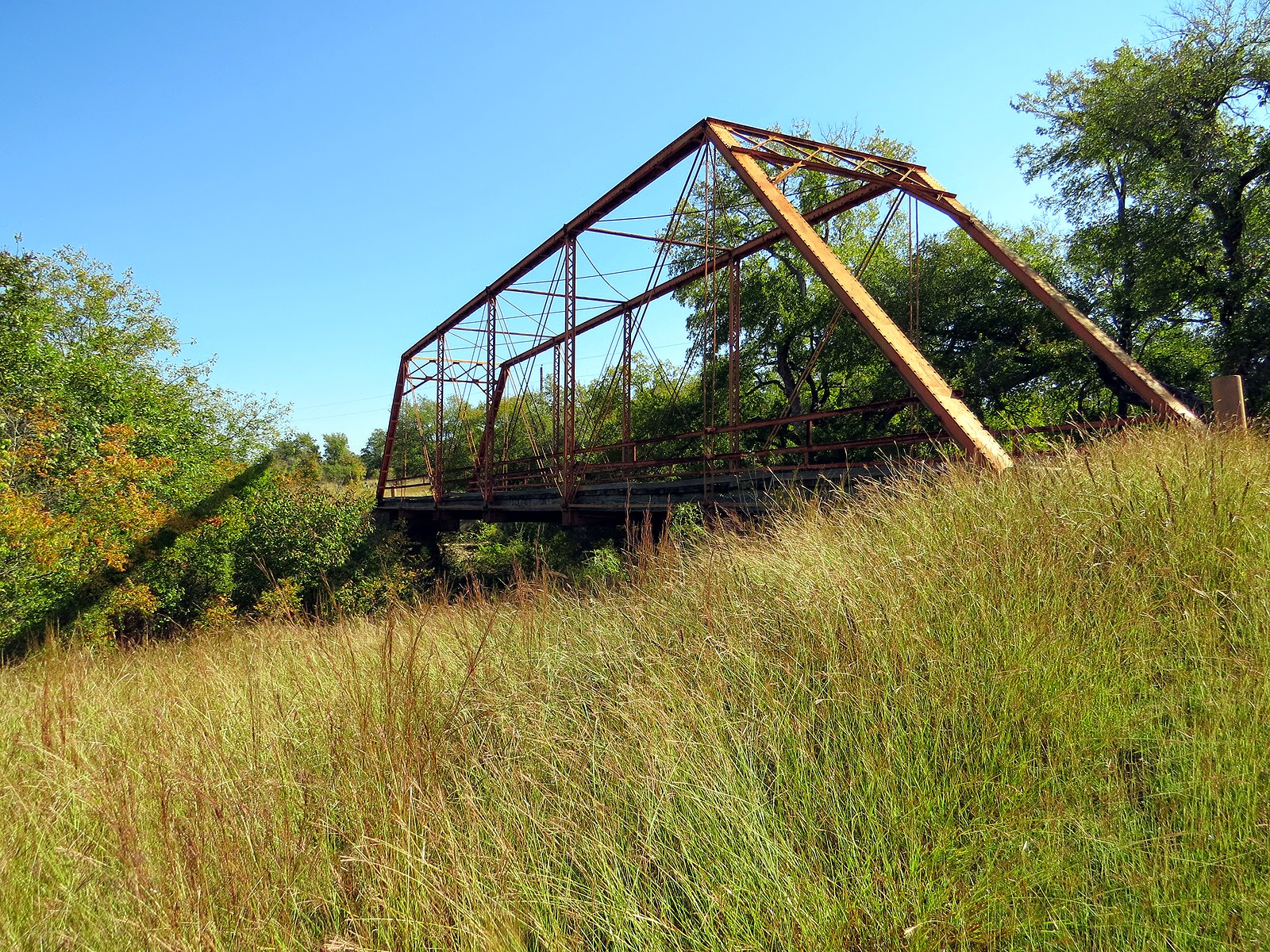 Anyway, I chose to go east because there are two relocated historic bridges along this section of the trail.

The trail itself is easy-moderate with lots of ups and downs as it cuts across the many rivulets and small ravines dropping down to the lake, but none of which are all that high. The ups and downs are just long enough to let you know they're there but not enough to set up a real burn.

The lake is located in the Blackland Prairies zone of Texas and the land around it is relatively flat and primarily crop land, including the recently harvested cotton. (You can always tell because of the drifts of little white puff-balls along the roads.) If it wasn't for the old watersheds at the the confluence of the San Gabriel River and Willis Creek, there wouldn't have been enough hole in the ground to form the lake in the first place.


It doesn't seem to be talked about much, not like the spring wildflower season, but fall, especially when there has been a bit of rain right at the end of summer, is the second wildflower season of the year around here, and this has been a good year. The fall flowers might not be as big and flashy as the spring crop, but if you take your time and - well - smell the flowers - there's really a lot going on. 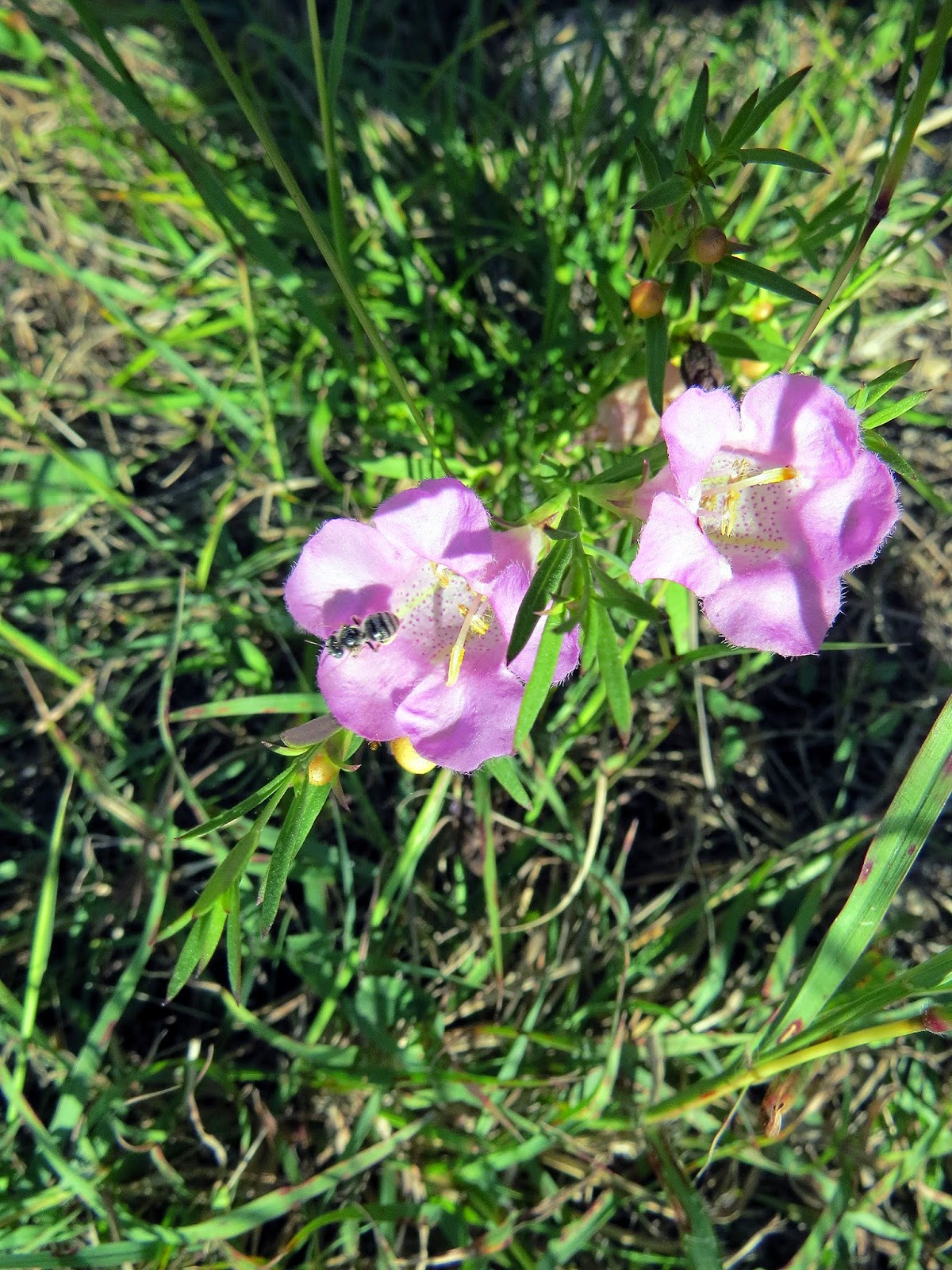 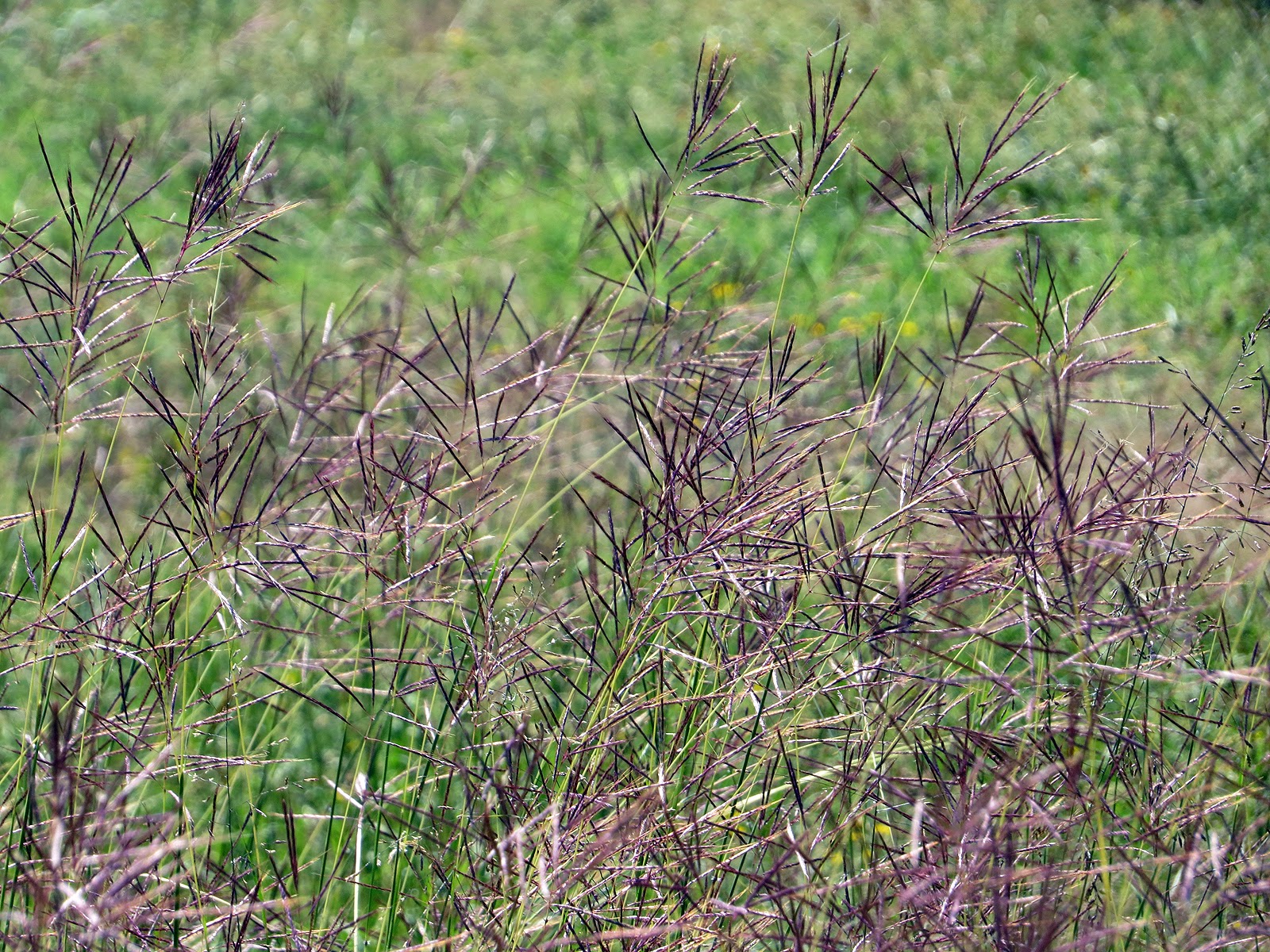 Throw in the undulating silvers and maroons and purples of ripening grass seed-heads and it's quite a show. 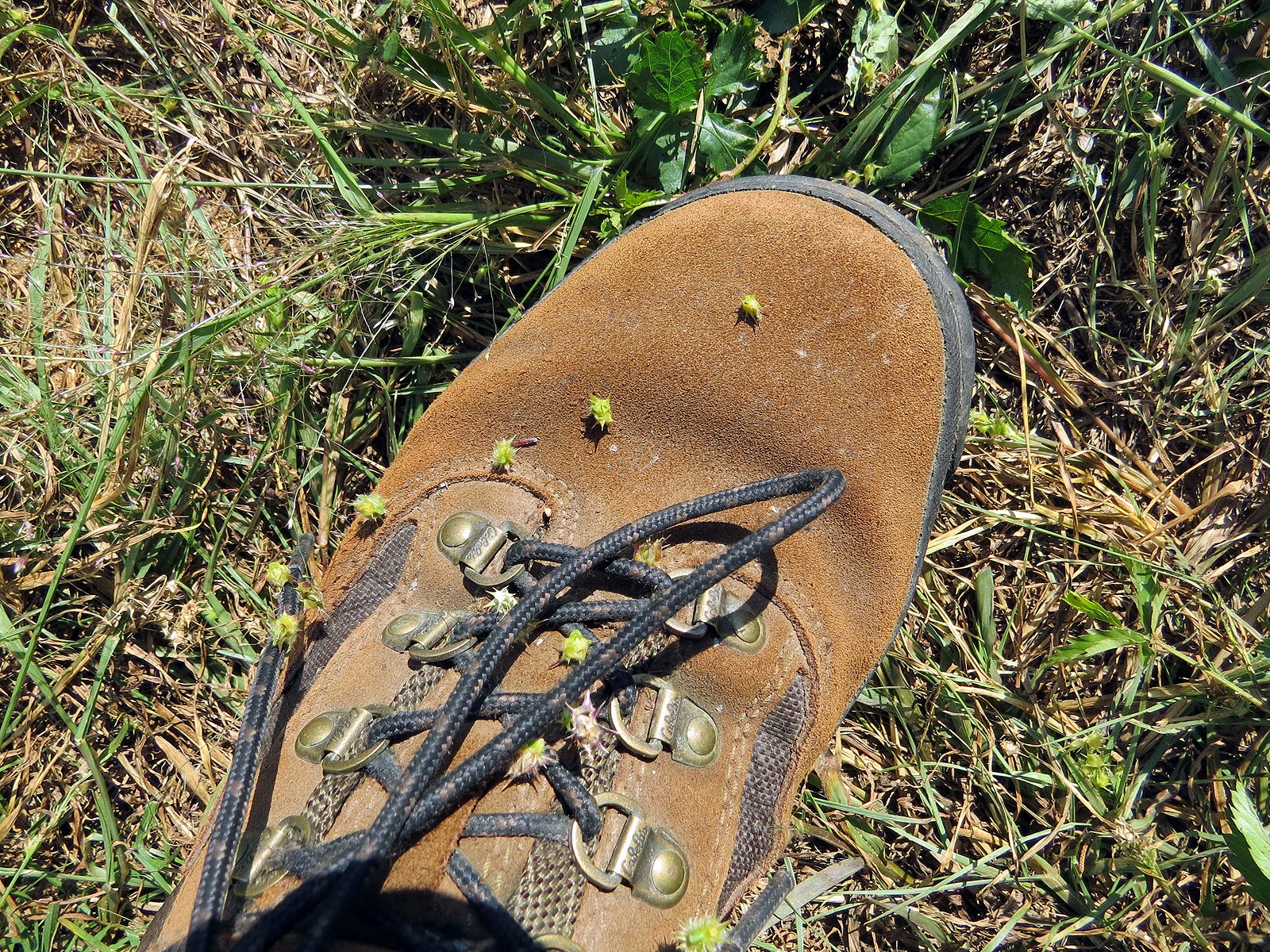 Of course it's also the second burr season of the year so getting off the worn trail is done at your own risk!

It helps to carry a leather glove along to get the nasty little buggers loose again.


Speaking of worn trail, there were two other vehicles at the trail-head when I left and one when I returned, but I didn't see anyone while out on the trail, I mean not a soul! Not even at a distance; not even when I put the binoculars on the swimming beach over there across the lake on this bright sunny day with the temps headed for the low 80's! 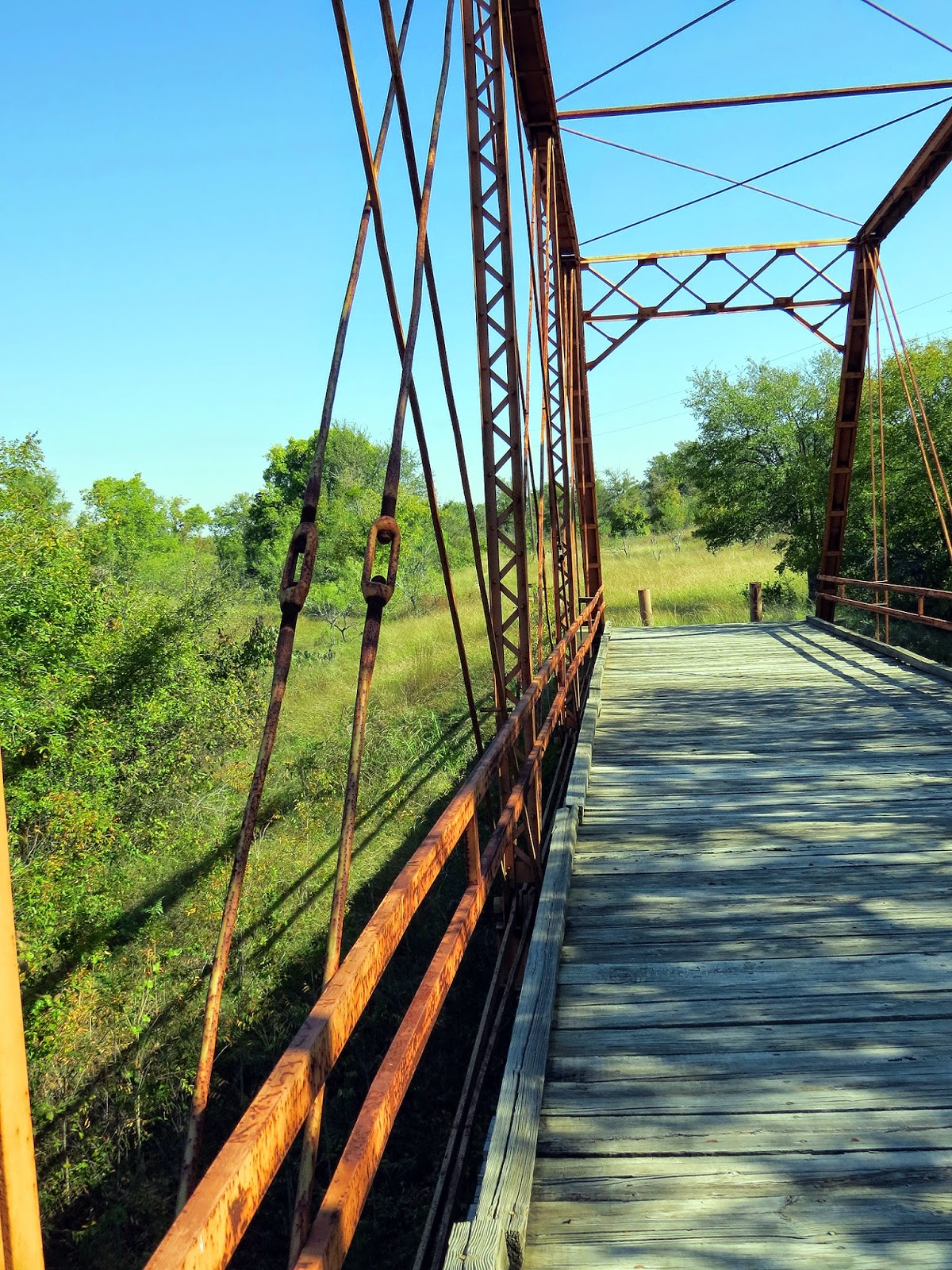 Which meant I had the two turn-of-the-century (twentieth century that is) iron bridges to myself.

This one, the single span Friendship bridge, which cost something like $500 in the early 1900's, was originally put across Willis Creek. It had to be rebuilt after the 1921 floods that devastated the area (Which is one reason why Granger Lake was formed in 1972 by the Corp in the first place.) then moved to it's current location as a foot bridge in 1982. 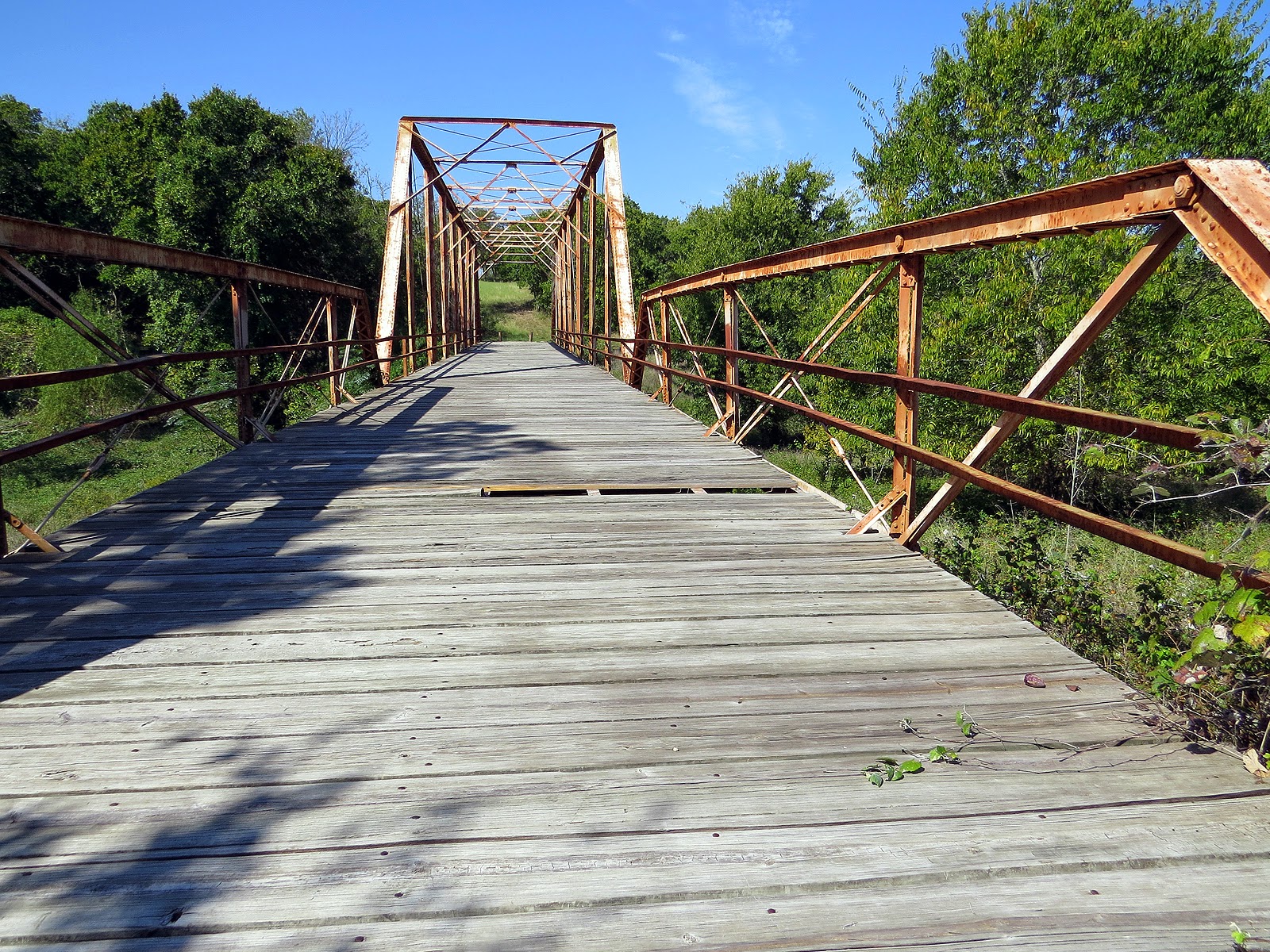 The a-symmetrical double-span Hoxie bridge was built over the San Gabriel about the same time and suffered the same washed-downstream-and-rebuilt-again fate as the Friendship bridge; during the same flood. Only the contractor that got the rebuild job on this one used convict labor and there's a gruesome story of a convict run amok, shot and hung from a nearby tree as an example. Apparently his ghost has hung around frightening people on full moon Friday nights.

The moon was far from full and it was broad daylight so I can't personally confirm that. . .but, 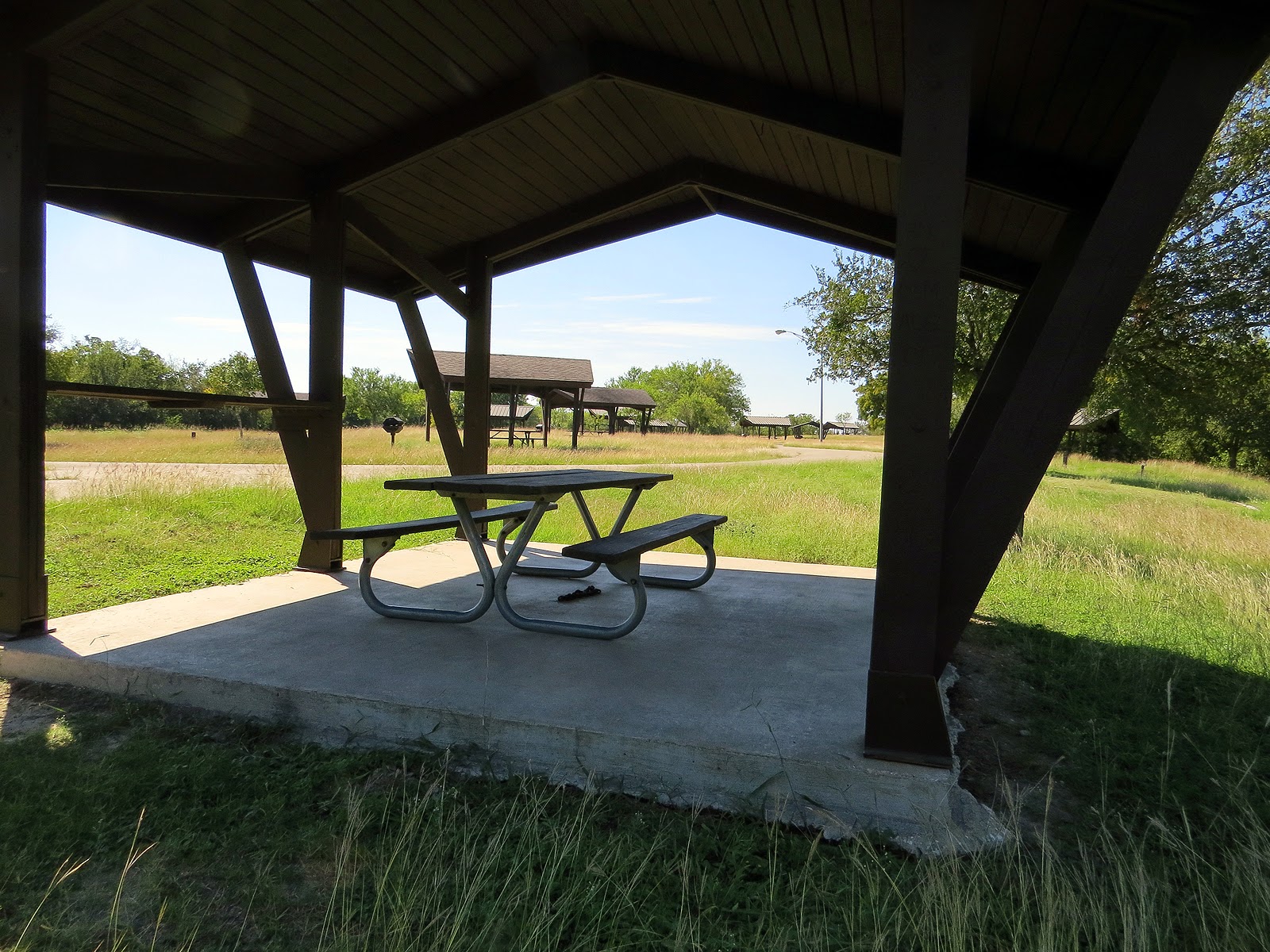 this is a photo of a few of the camp sites at the Taylor Park unit near the East trail-head. As you can see they're fairly nice sites and at least some have power, yet not a single one of the 48 sites was in use!

I mean, I'm all for crowd control, as in keep them all away, but I didn't expect anything like this and it was a little eery. . . Maybe there is something to that ghost story!!

OK, time to head back to the van and get the heck out of here!
(Only because I have other places to be of course. . .)

On my way out, before heading on over to Inks Lake State Park, still a couple of hours away up on the Edwards Plateau, I circled Granger Lake. The bass fishing is supposed to be great but the lake's surface was unbroken by even a single boat and the whole place felt kind of sterile, except where Willis Creek enters the lake. It looked like there might be some interesting kayaking around that area.

Maybe one day I'll brave the angry ghost and give it a try, but perhaps not on a full-moon Friday. . .