When I flicked the switch to open the vent in the van this morning following the predicted storms of last night, the motor sounded pretty anemic. (The rain sensor that normally opens and closes the Fantastic Vent automatically has given up the ghost, but replacements parts are on the way, at no charge to me thanks to Fantastic Vent's very good legacy warranty of 7 years. (I think the new warranty, now that they are part of Atwood Mobile is 2 years but I will still be a customer.))

After countless times listening to that motor open or close the vent I know what it should sound like and this wasn't it!


The van has been sitting for a few weeks now with only parasitic loads on the electrical system from CO2 sensors and the like, and those only overnight when the solar panel is dormant, so there was no reason for that motor to sound the way it did!

I immediately checked the E-meter and the charge level was at 97.5%, right were I would expect it to be first thing in the morning under these conditions, yet the battery voltage was only 11.02 volts. Not good! Not good at all!!


Note that the charge percentage is figured by the E-meter based on current out verses current in against the size of the battery, where the voltage is based on, well, measured voltage.

Despite the fact that manufactures continue to sell simplified 'battery' meters, which are nothing more than voltage sensors, or even worse, the little plug thingy with full/normal/low lights on it, for attractively low prices, they don't work!

Unlike a fuel tank which can be checked with a simple level gauge, true battery state can only be determined reliably by combining current in/out data along with voltage, and it also helps if you have a bit of experience at it, such as frequently checking the readings under different conditions so you know what they look like when everything is working properly.

Anyway, my initial look at the battery state was before the sun was up, and by the time I finished some other chores and got back to the van with the camera in tow, the sun was climbing over the treeline and the solar panel was starting to tick over. So now the battery charge was back up to 100%, yet the panel was still shoving 3.5 amps into it (Should have been more like .5 to .8 amps.) and the voltage was only 12.55 volts. (Should have been more like 13.4) 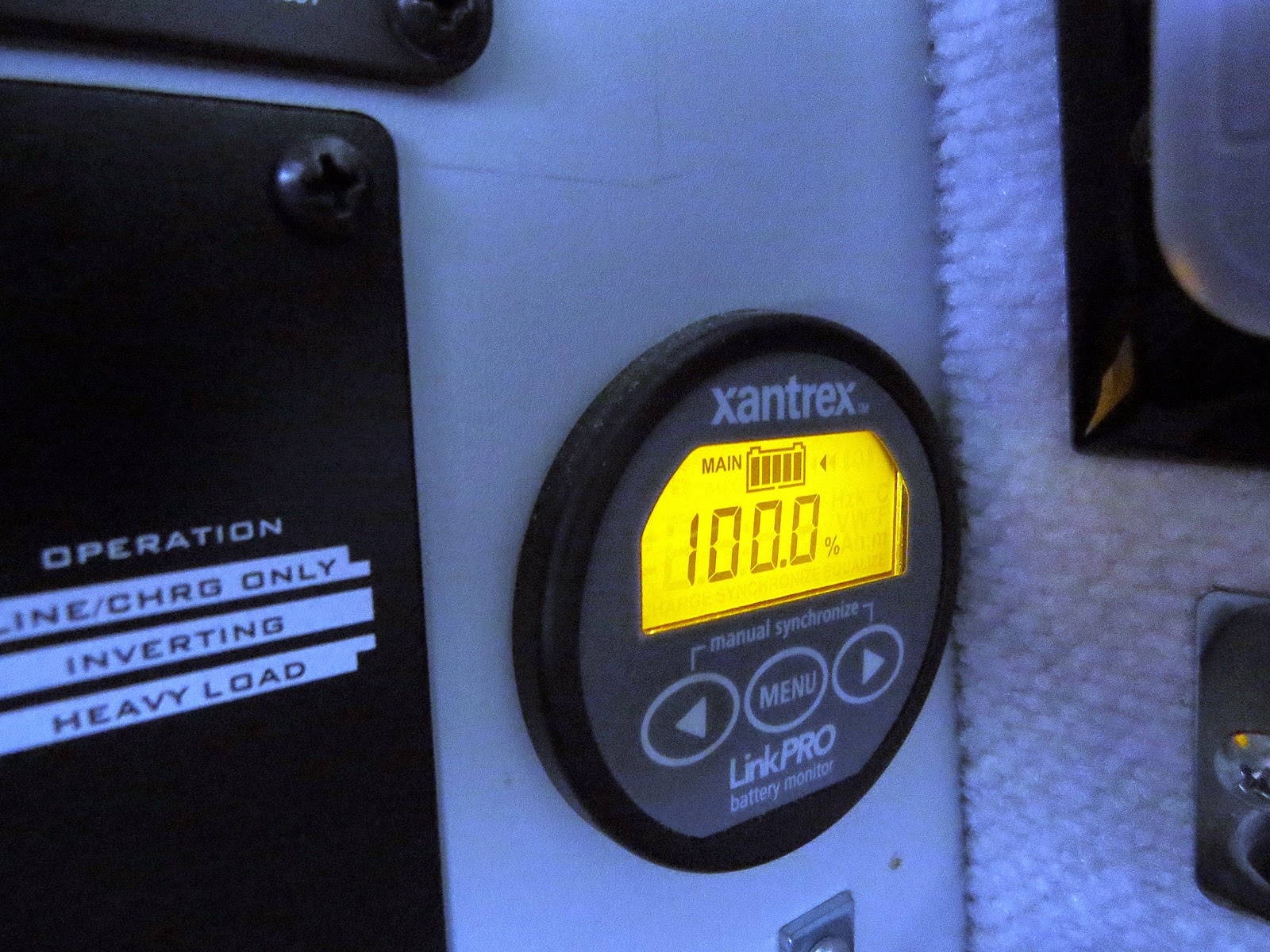 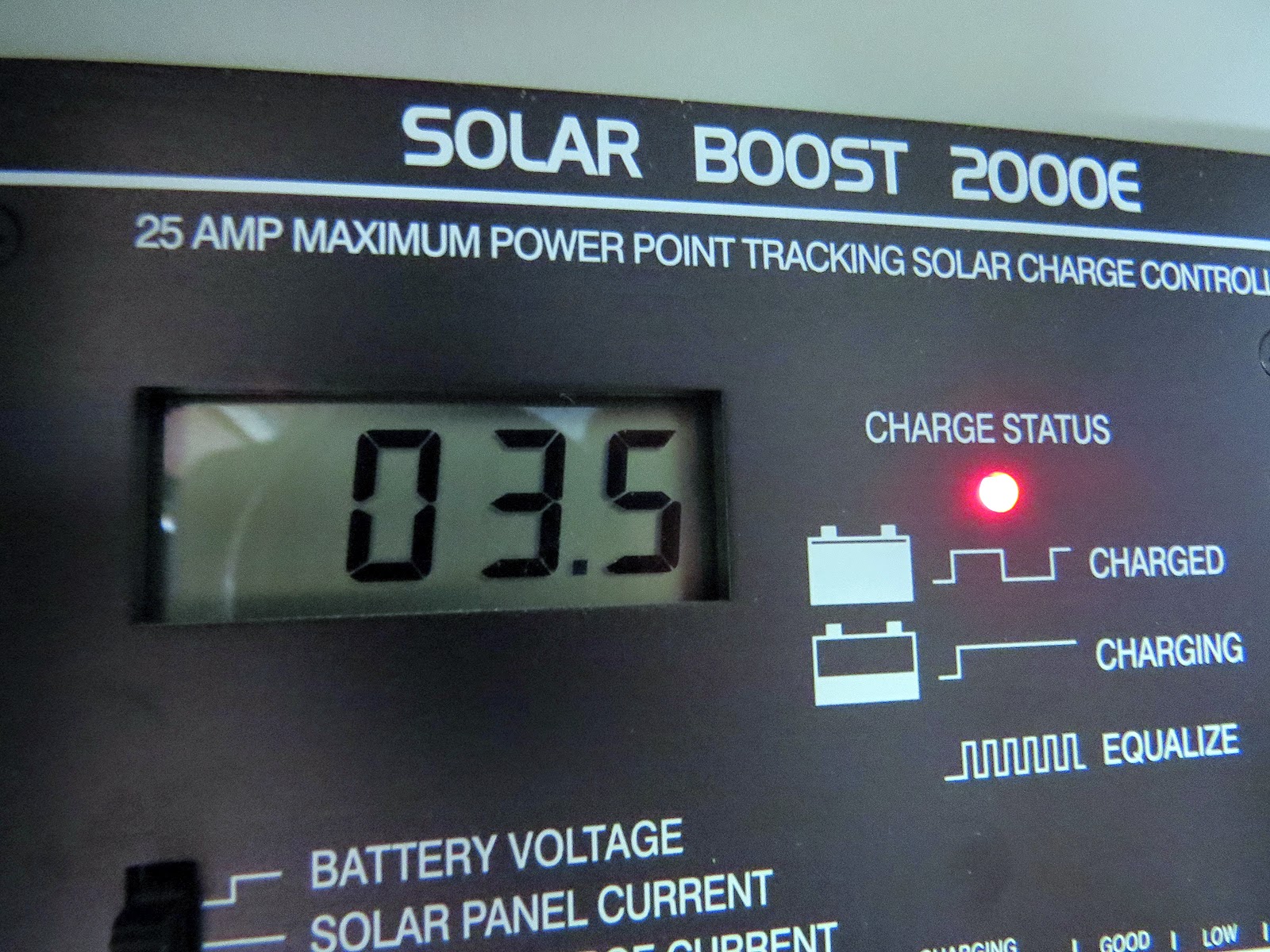 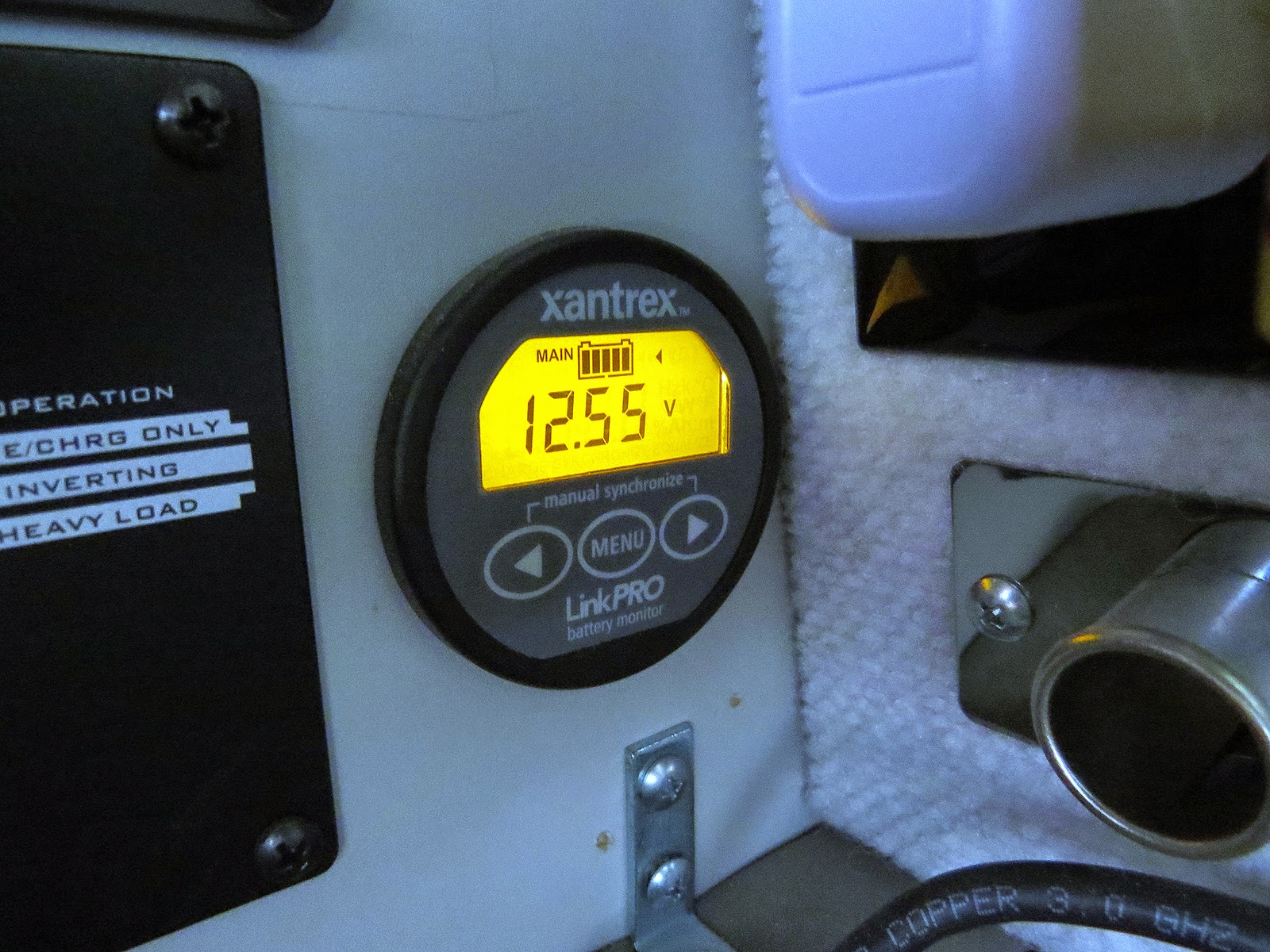 Now I could have just blamed that voltage reading on a faulty sensor in the E-meter but the solar charge controller, right there next to to the E-meter, has a switch to display battery voltage as well as panel and output current, and the two meters pretty much agreed that the pooch had been screwed.

Because, if this was just a resting battery 12.55 is a reasonable, though not great, voltage, but with the solar kicked in like that, it sucks!!


Not that I'm terribly surprised. I use the heck out of my batteries and I've been noticing a decline in battery health for about 6 months now, but it does seem like the end came a bit precipitously, and right when camping season down here in Texas is just kicking in!

Only thing to do is get right on it. 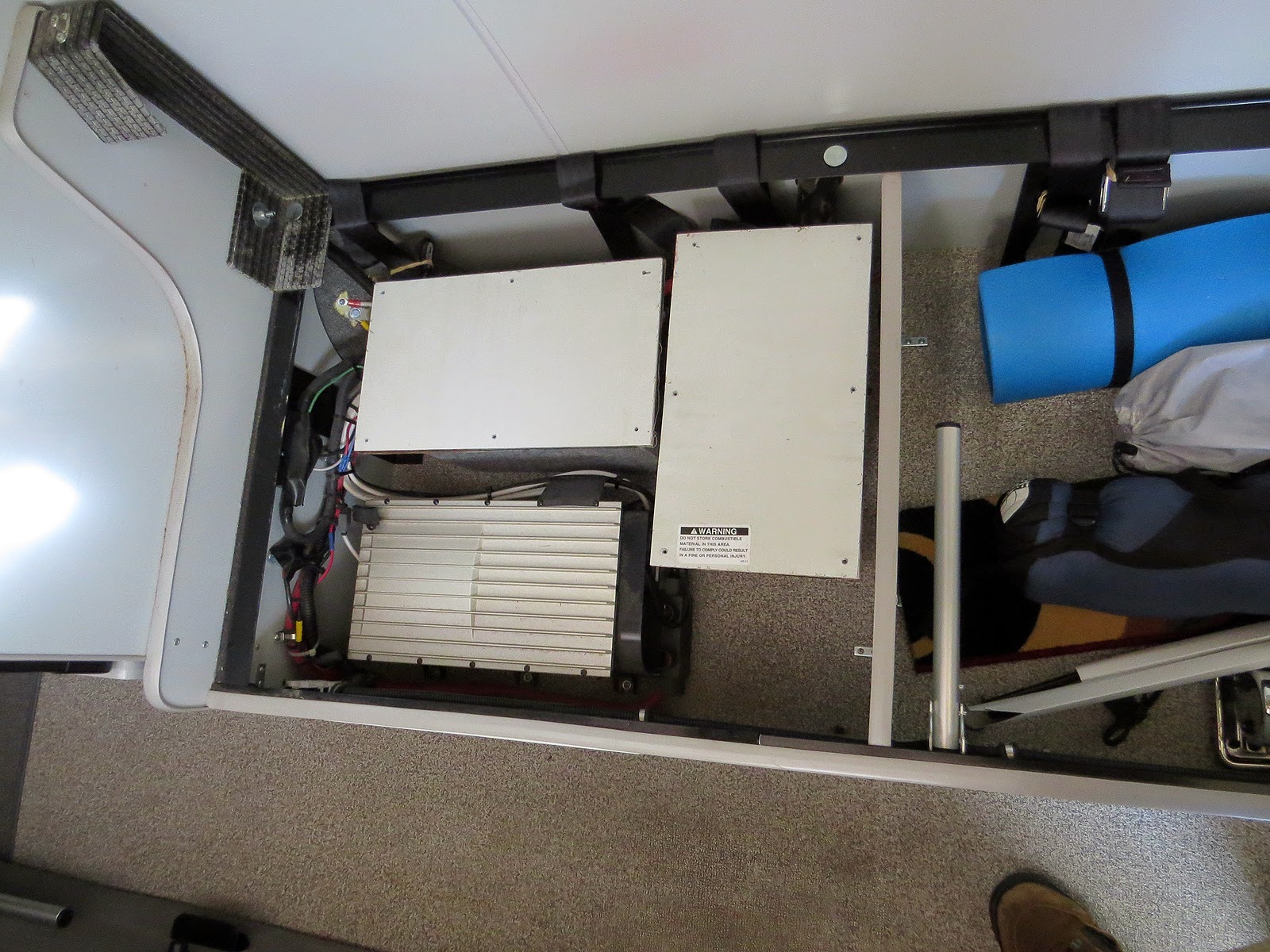 First I removed the bed, which is as simple as removing two nuts, (Then making sure you don't damage your own nuts when lifting it out!) to get unfettered access to the battery boxes. The two white boxes in the photo above are the sealed and vented battery boxes while the ribbed silver thing is the shore-power charge controller/inverter. The rest of that stuff over to the right on the other side of a divider is just some of the crap I keep stored under the bed. 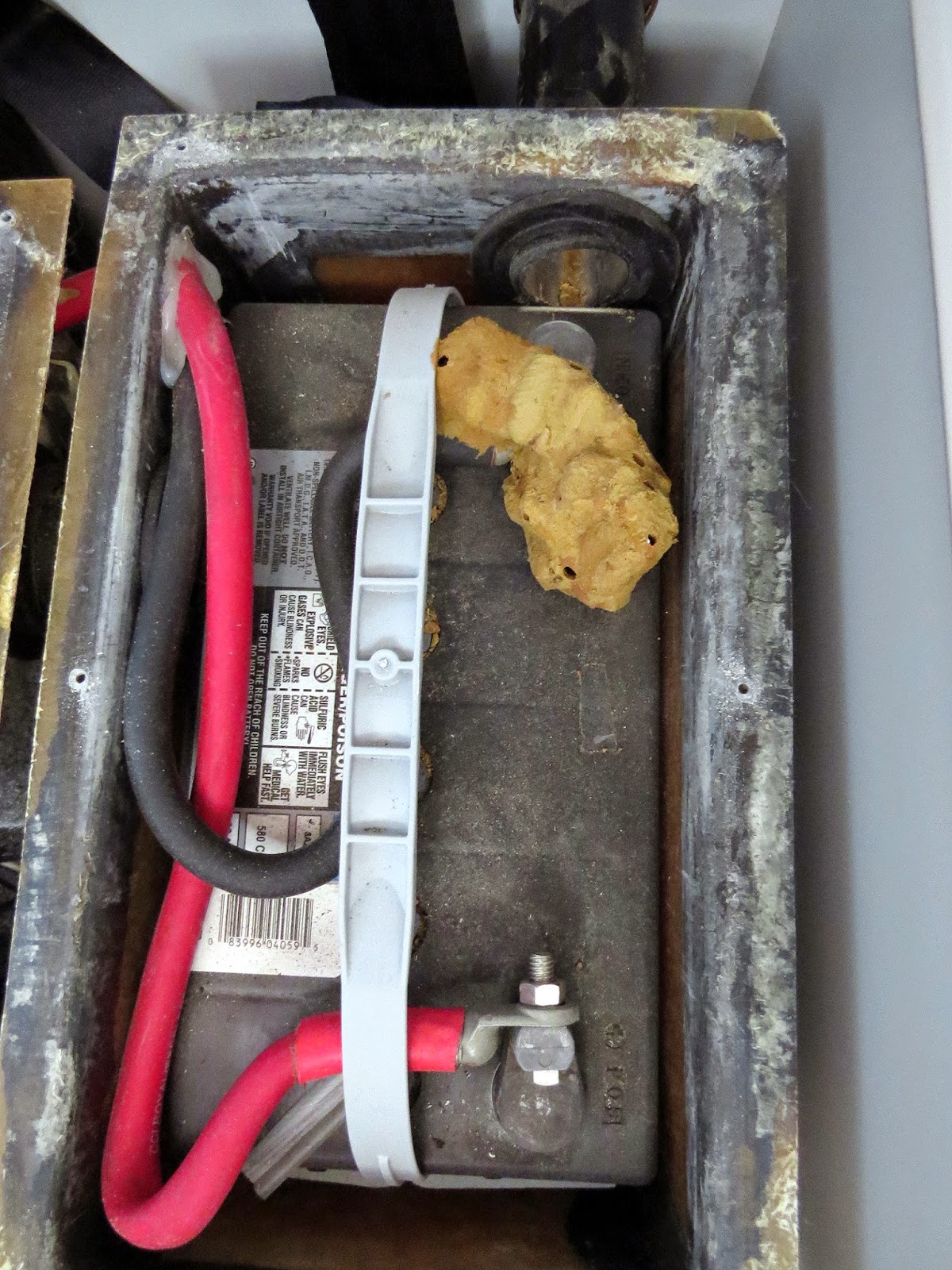 Next I pulled the gasketed lids off the battery boxes.

Mud daubers are just a fact of life here so I wasn't surprised to see that they had been coming in through the box vent, but that wasn't my problem. Life's never that simple; though I did add nylon scrubbers to my shopping list. I'll cram one into each of the vent pipes to stop the wasps while still allowing airflow. 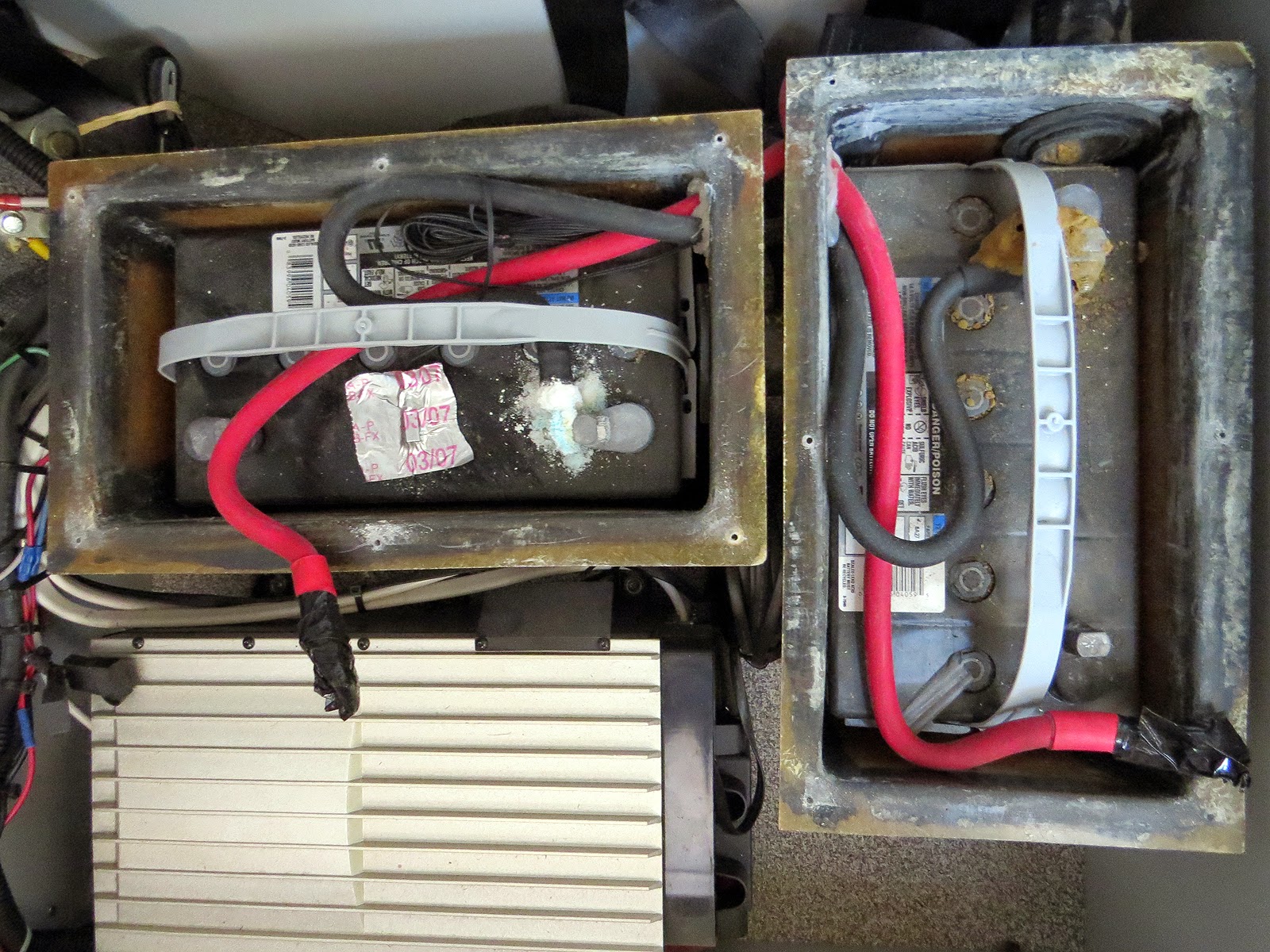 The next step was to remove the positive leads from both batteries. Now there's always a lot of discussion on which lead, positive or negative should be removed first. In the case of an auto I agree with the majority that the ground should always be removed first, but an RV, especially an RV with solar, is a different animal and I'm more comfortable de-enrgizing the system the way I'm describing, though I don't go so far as to claim it's right.

These batteries are connected in parallel so the first lead removed is still, in effect, connected to the other battery, so a little bit of care is a good thing here. I used gloves and a full face shield and carefully taped each lug as I removed it so there's little chance of an accidental short. 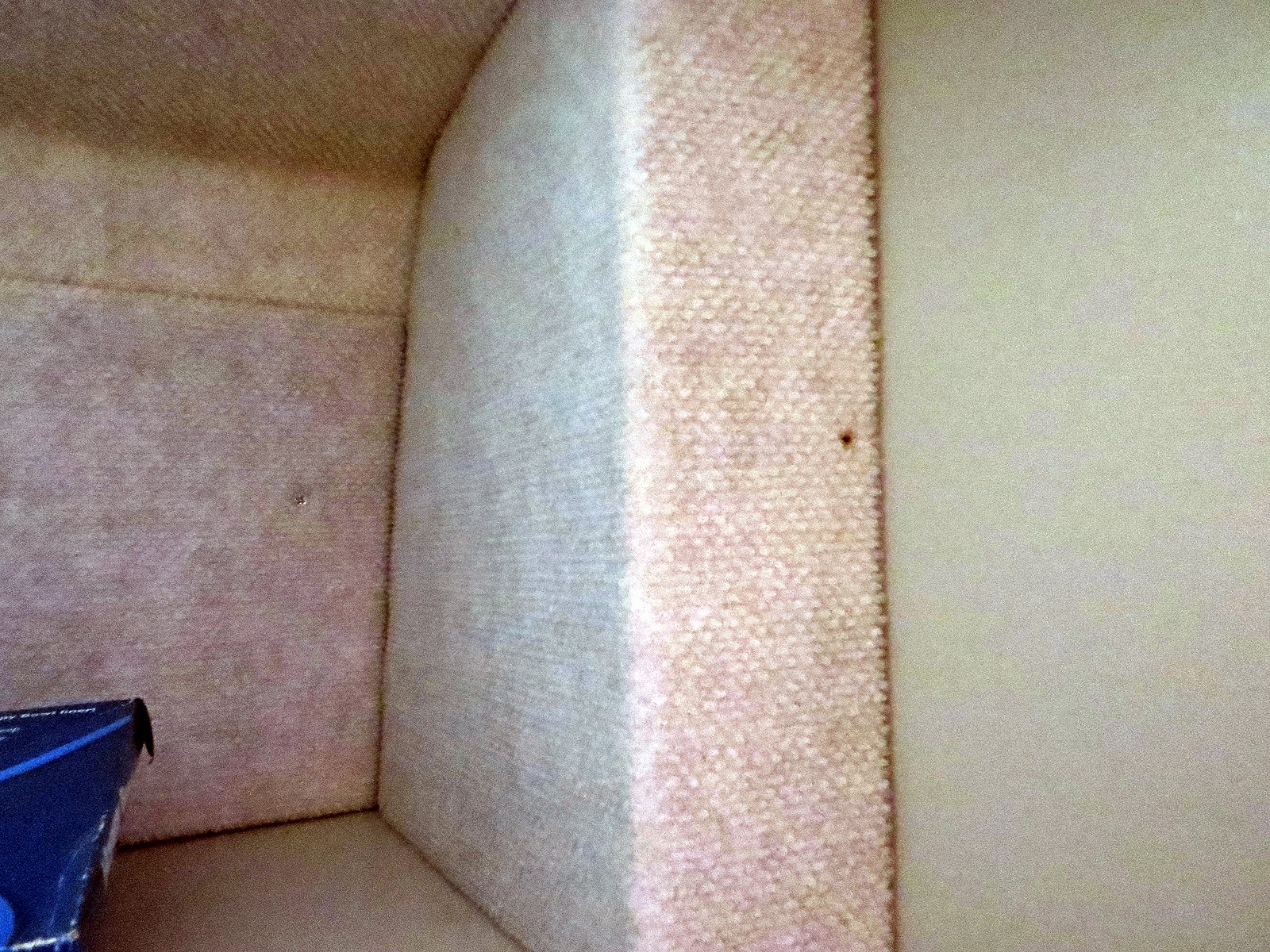 With the positive leads removed I left the batteries for a moment and moved up to the solar charge controller, the back side more specifically, which is hiding inside a cupboard behind the small box in the photo above. 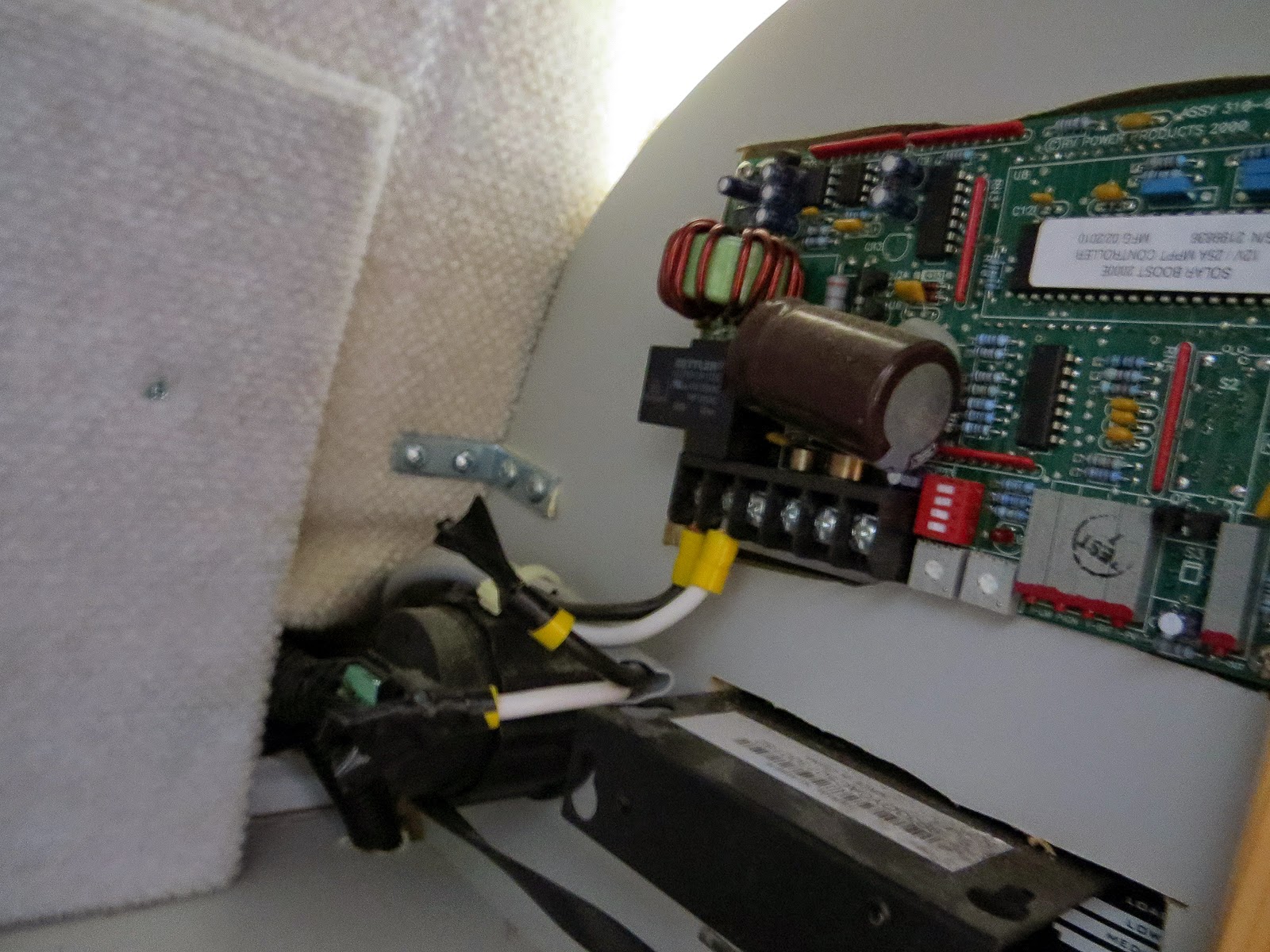 They are a little hard to see in this photo but there's a white and black wire there that used to be connected to terminals 3 & 4 but which are currently removed and taped up.

Coincidentally, when we were in town earlier this week I wandered into our local NAPA store looking for a small battery disconnect switch that I could wire in here so I don't have to remove wires from lugs, but the only one they had in stock at the moment was a monster rated for over 100 amps.

The reason I remove the battery leads first is because that's where most of the energy lives, in the batteries, like a hundred amps or more worth! (Ever seen a farmer weld a broken part with the battery in his truck?? Just imagine yourself or delicate electronics on the end of that spark instead!) With the batteries disconnected I feel like it's just a little bit safer to be up there messing with the solar panel which is limited to around 15 amps max if shorted in full sun. 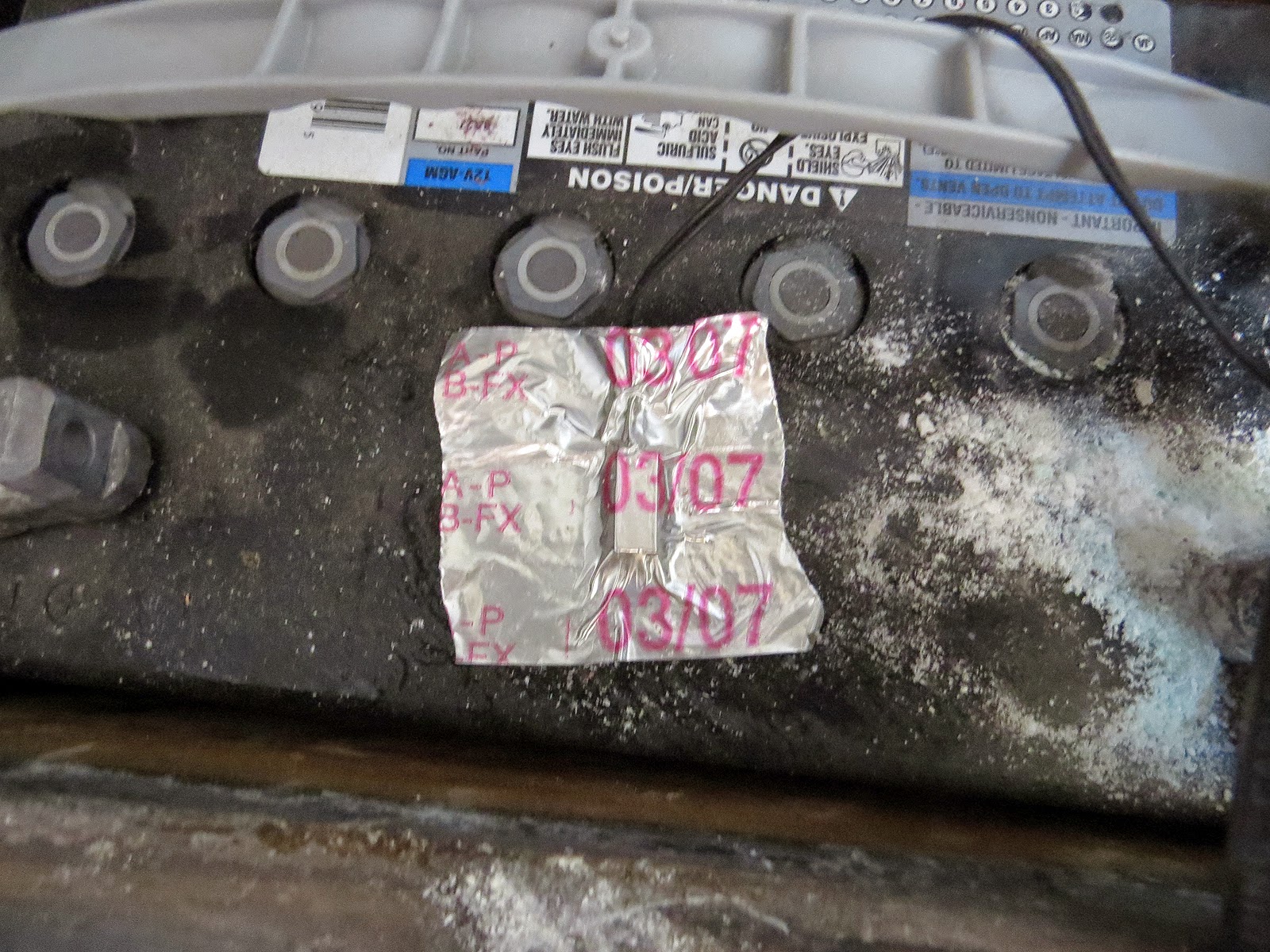 With the whole 12 volt system de-energized now, I went back and removed and taped the two ground wires from the batteries then peeled the temperature sensor off the top of one of them. This sensor is connected to the shore-power charge controller which adjusts it's charge profile according to battery temperature. This is typically a sign of a good, gentle charger. 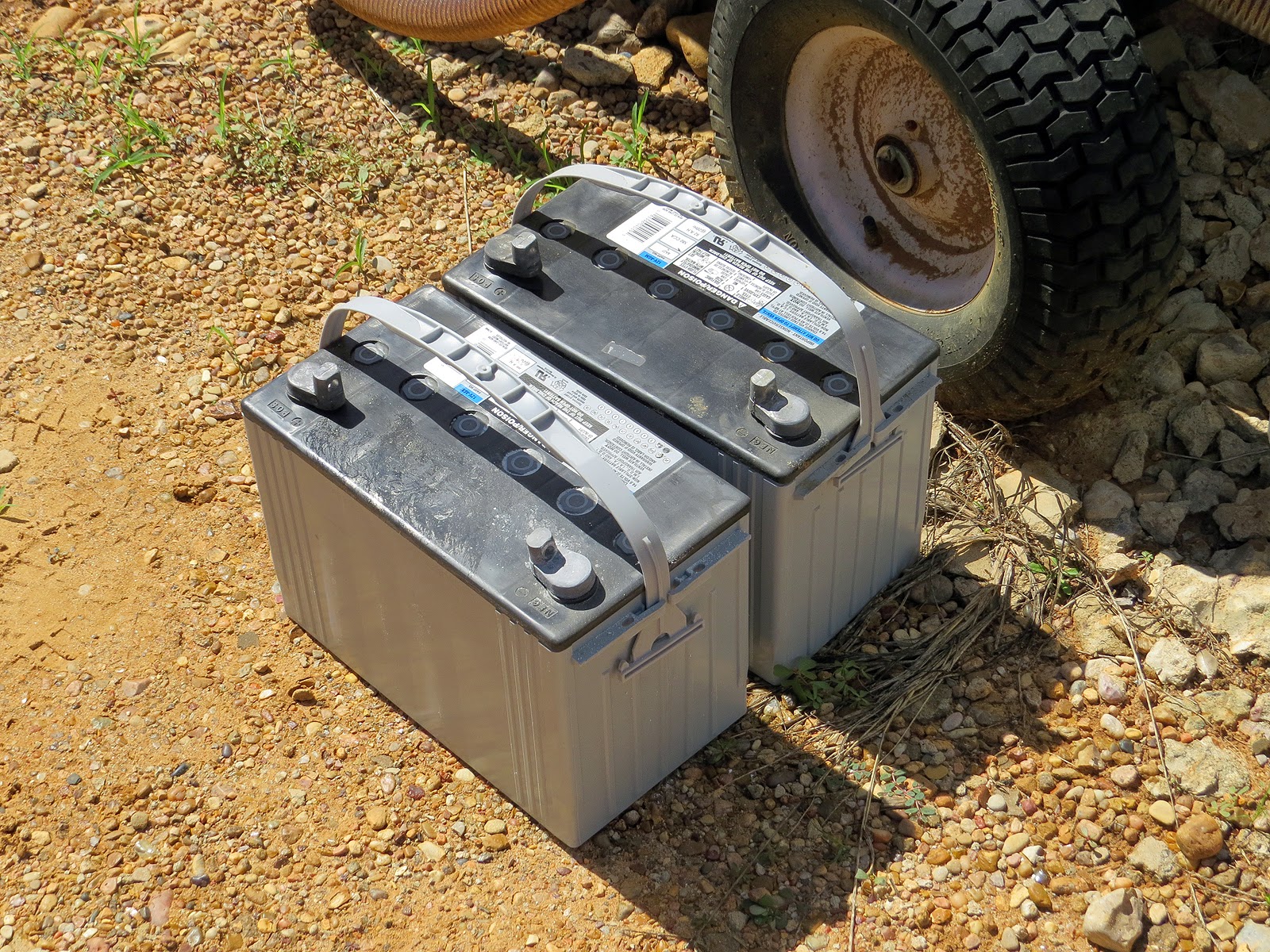 Then it was a simple matter of lifting each battery out so they're ready to be turned in when I buy the replacements so I don't have to pay the core charges.

The sharp-eyed will note that these are AGM batteries. If you don't know what that means the simple explanation is that AGM's were originally designed for jet fighters where the batteries are often upside down and subjected to a whole lot of stress and vibration.

They are very robust and, in theory, their use in RV's is a step up from lead-acid batteries and should provide more reliable service. I've been using them in the past several rigs but I'm rethinking that now.

After replacing three sets of AGM's over the years, with my type of usage I can see no increased life out of them compared to the lead-acid batteries I used before. In fact the set of AGM's I just pulled out is marked as having been put into use in February of 2011, only three and a half years ago. I have easily gotten 3.5 years, and usually more, out of deep cycle lead-acid batteries that cost only half as much and are more readily available!

I did some research this afternoon and found that the group 27 deep cycle batteries marketed by Sam's Club (Energizer), Wallmart (Everstart), NAPA (Premium Marine/RV) and others, are all made exactly the same way, to the same standards, in the same USA based factory, the only difference being the label slapped on them at the end of the assembly line.

Since I can pick up a pair of these from Walmart for $164 or a pair from the local NAPA store for $202, instead of the $460 I would pay for a pair of DEKA AGM's, assuming I can find them, guess where I'm headed when we make our next trip to town. (Walmart has a better warranty as well as price than NAPA but it's a long way to the next store for us so I'll buy them where I can find them.)

If my decision to go back to lead/acid proves faulty they only have to last 2 years for me to break even on the deal. Worth a try to find out if I've been paying more than I need to for reliable batteries. All I have to do is remember to switch the shore-power and solar chargers from AGM to lead acid mode so they're using the proper charge profile.