Granger and Inks, a tale of two lakes, conclusion


So there I was, at the wrong end of a wind-swept lake in my inflatable kayak, scaring myself with what was going on beyond the protection of the trees I had backed myself into. The water was all churned up, the flags were standing straight out, and the tops of the trees behind me were thrashing and banging in the wind, but I was also getting bored with waiting for said wind to die down (Which it probably would, but not until sometime after sunset. . .).

So I let the air out of my seat to put me low in the kayak, reducing my windage, re-secured all my gear, set the paddle to feather mode, aimed the bow into the wind and waves, and started paddling.

It was a slog, paddling directly upwind half the length of the lake, and I could claim it was an epic - man against - battle that I barely survived, heroically paddling with one hand and bailing with the other; but it wasn't.

In fact it wasn't all that bad. Yes, I got a little wet, but not near as wet as I had built myself up to expect, and with the proper plugs removed the kayak is self bailing anyway. I did feel it in my arms, the long strokes, one right after the other, no time for rest, pushing with the top arm, pulling with the bottom one for power, over and over and over. But I could see from the passing shoreline, which I stuck fairly close to, that I was actually making good progress, better progress than I expected.

In fact my progress was so good that when the campground was one last 1/4 mile of open water away, I hung a left instead and switched back to sight-seeing mode.

Having been there before I knew that at the far east end of this branch of the lake Spring Creek empties into the lake between some decent rock walls. My plan was to drift quietly up through the resulting canyon until I gently beached where lake meets creek-bottom.

Except I never made it there.

When did kids stop going to school???  Here it was, early afternoon, mid-week the third week of October, yet there was a mess of kids running loose on the world up there in the rocks! In fact some of them were climbing high above the lake then leaping off the rocks into the water far below.

All of this was accompanied by the kind of whooping and hollering and screaming only kids and drunks can produce, and I'm not any more a fan of kids and drunks than I am of loud, unnecessary noise. (By the way some of you motorcyclists out there, and you know who you are, the ones with painfully loud exhaust systems; stop trying to feed the rest of us that crap about about the noise making riding safer for you. Just man up, regardless of your gender, and admit it's all about making you feel like the big man on the block.)

So after snapping a few photos of the shenanigans for evidence, I turned tail and retreated to camp. 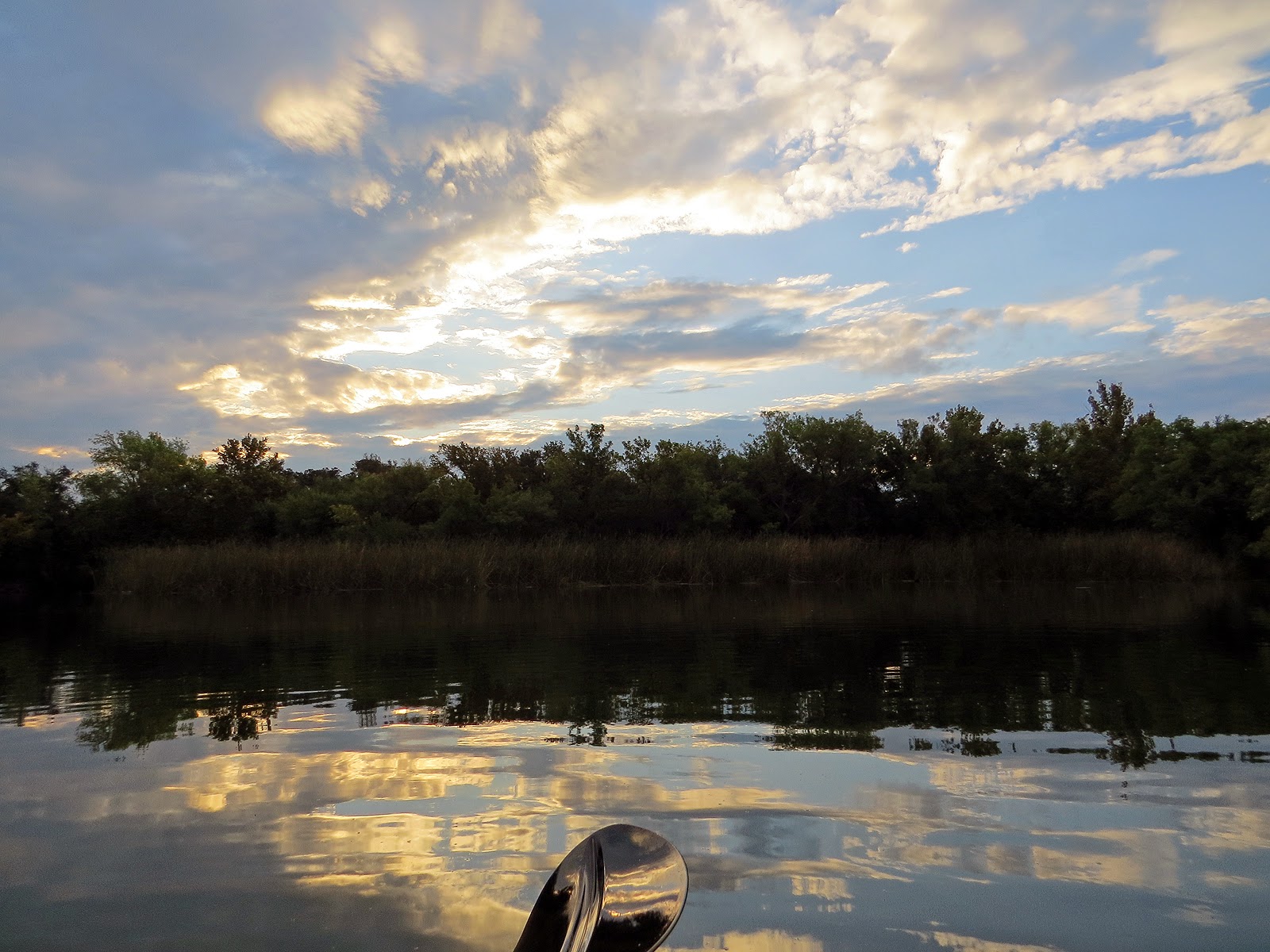 The next morning I was once again up and at it early.

The kayak was still inflated from the day before (I've found that if I remove the skeg I can slide the inflated kayak, stern first, under the van from behind (Once everything under there has cooled down!!) and tie the bow off to the hitch to keep it safe.) so actually getting on the water was simple; but only after checking NOAA for wind predictions and double-checking those against Weather-bug!!!

It was a morning of quiet paddling, except for the guy sitting in camp with his cup of coffee who thought it appropriate to tear the serene silence apart with shouts asking about the fishing, or the two guys a couple of camp sites further down babbling loudly away at each other over inane crap, apparently enamored with the sound of their own voices (Come on people!!! It's dawn in a public campground. SHUT THE HELL UP!!!) 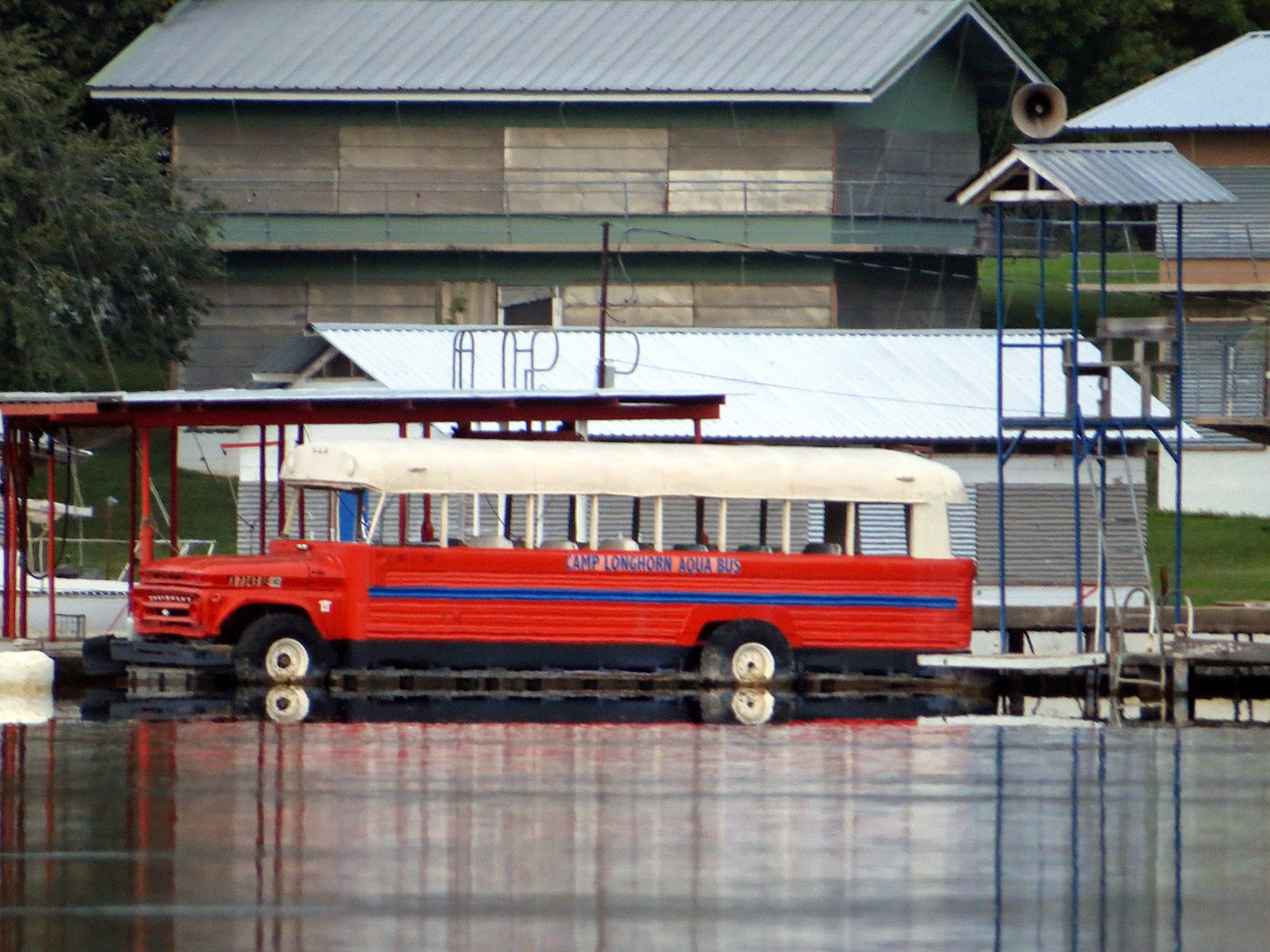 Again, I had the lake to myself and it mostly turned out to be a morning float of birding, though I never did find that dock loving White Crested Camp Longhorn Aqua Bus listed in my Sibley Guide to Birds. 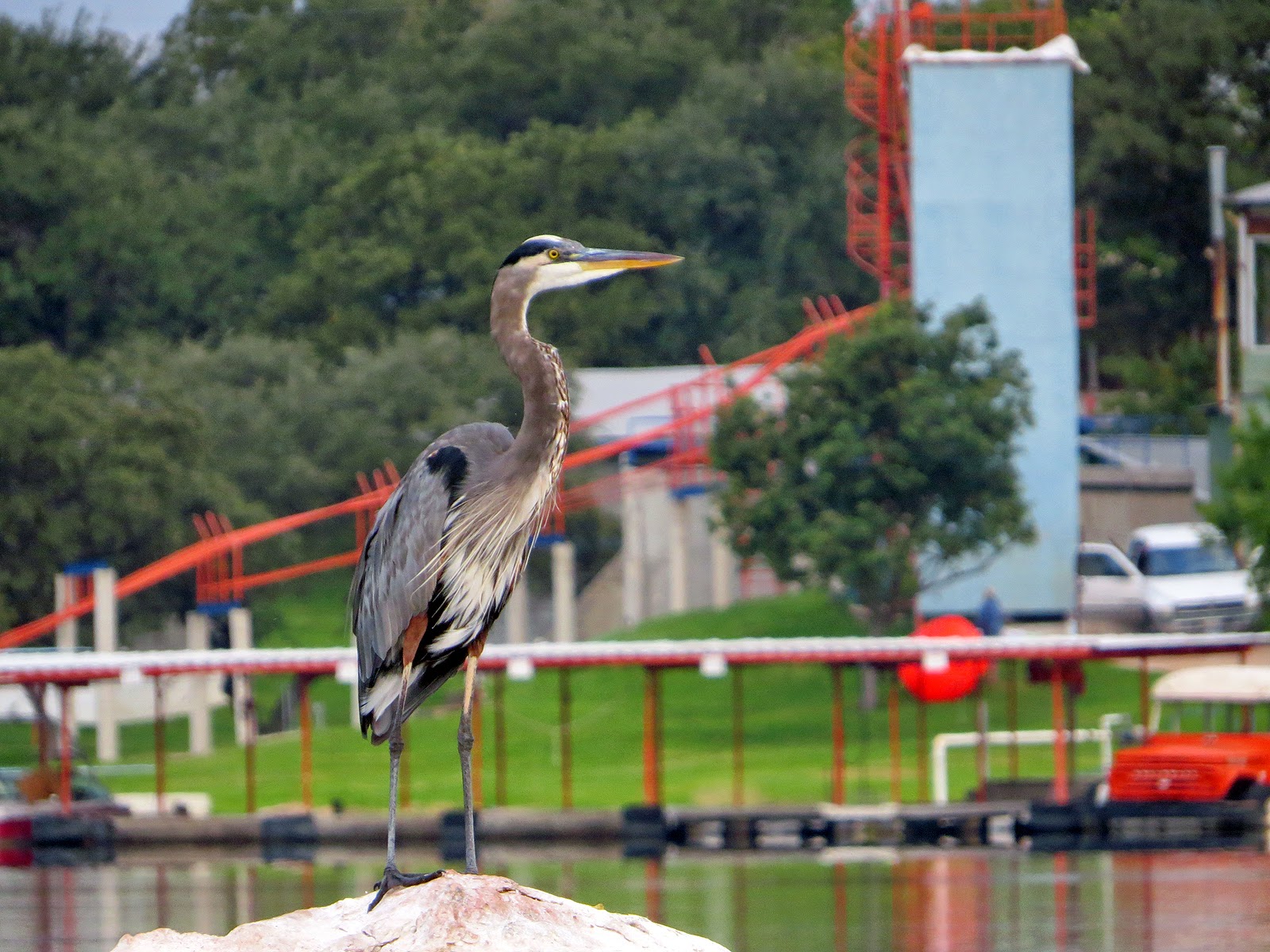 I thought I got some really good shots of this Blue Heron taking flight by using the rapid fire Sport mode on my camera, but every one of the dozen or so shots was focused on the background and not the bird. . . Guess I need to get the manual out and work on that. 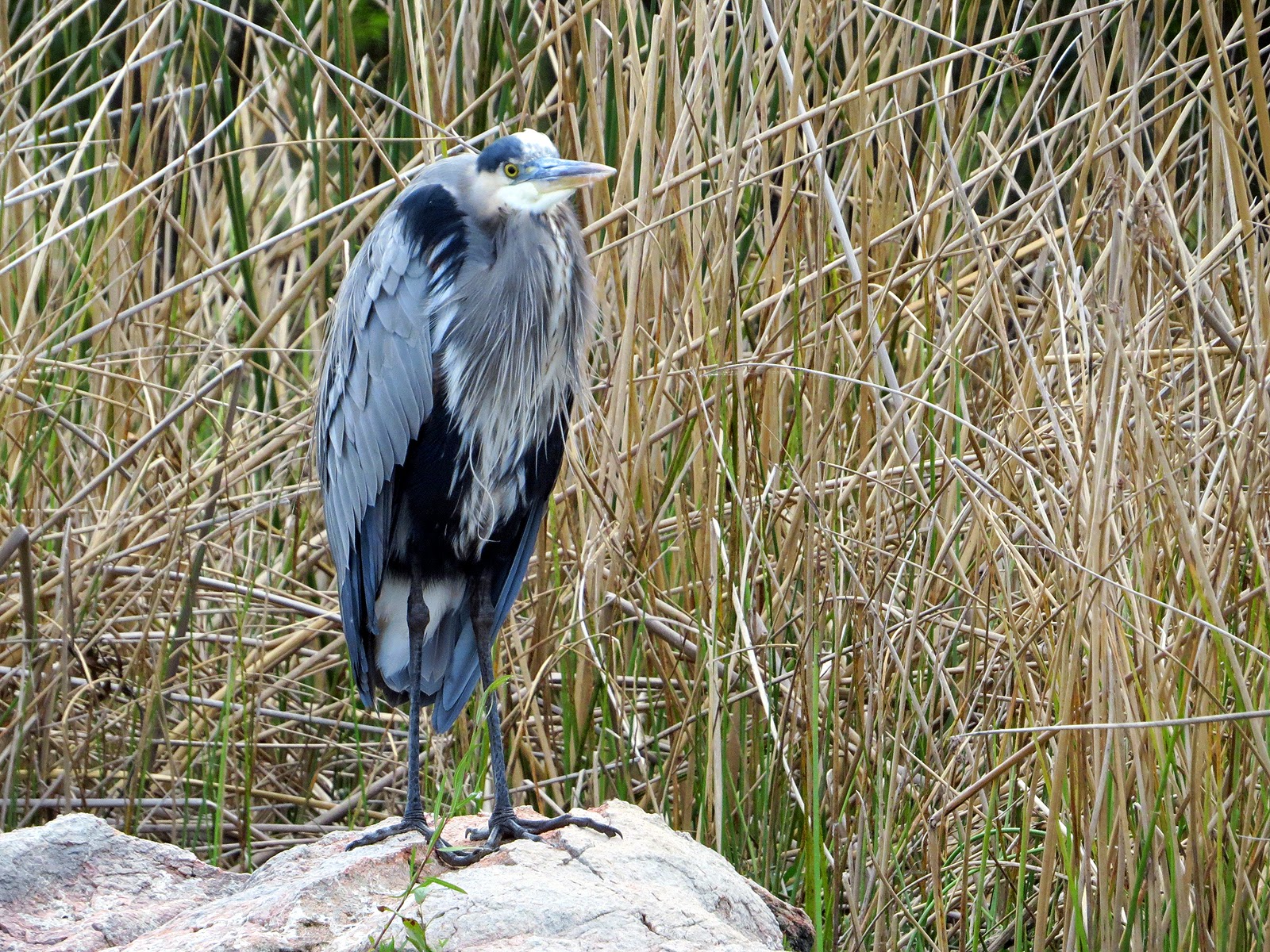 Clearly this guy is not a morning person and I got the evil eye for daring to drift by! 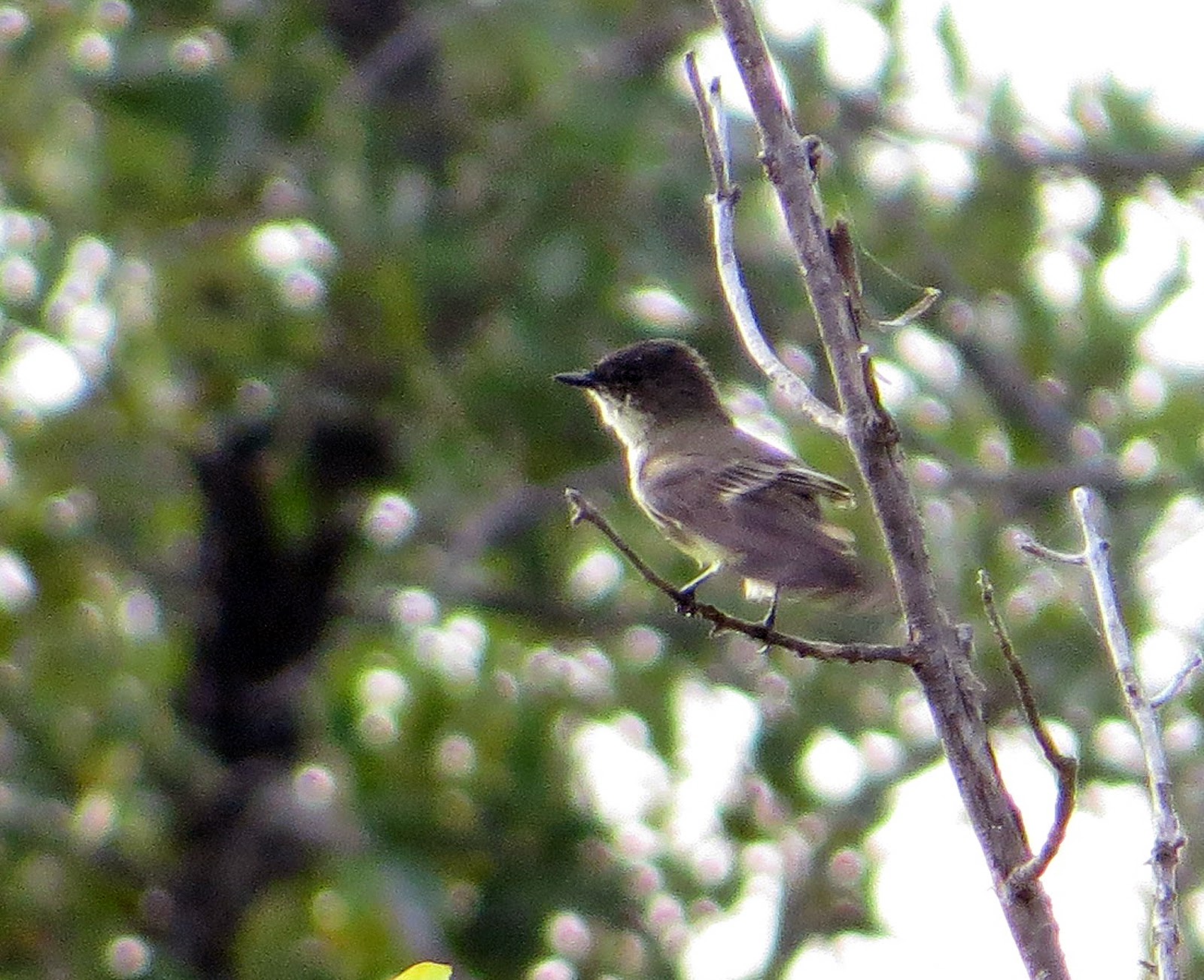 I don't know if it was my skill at stalking, or if this Eastern Phoebe just didn't give a rat's patootie that I was getting close. (Though I strongly suspect the latter.) But he stayed right were he was, never stopping the characteristic twitching of his tail, which is why it's blurred in every shot I took. 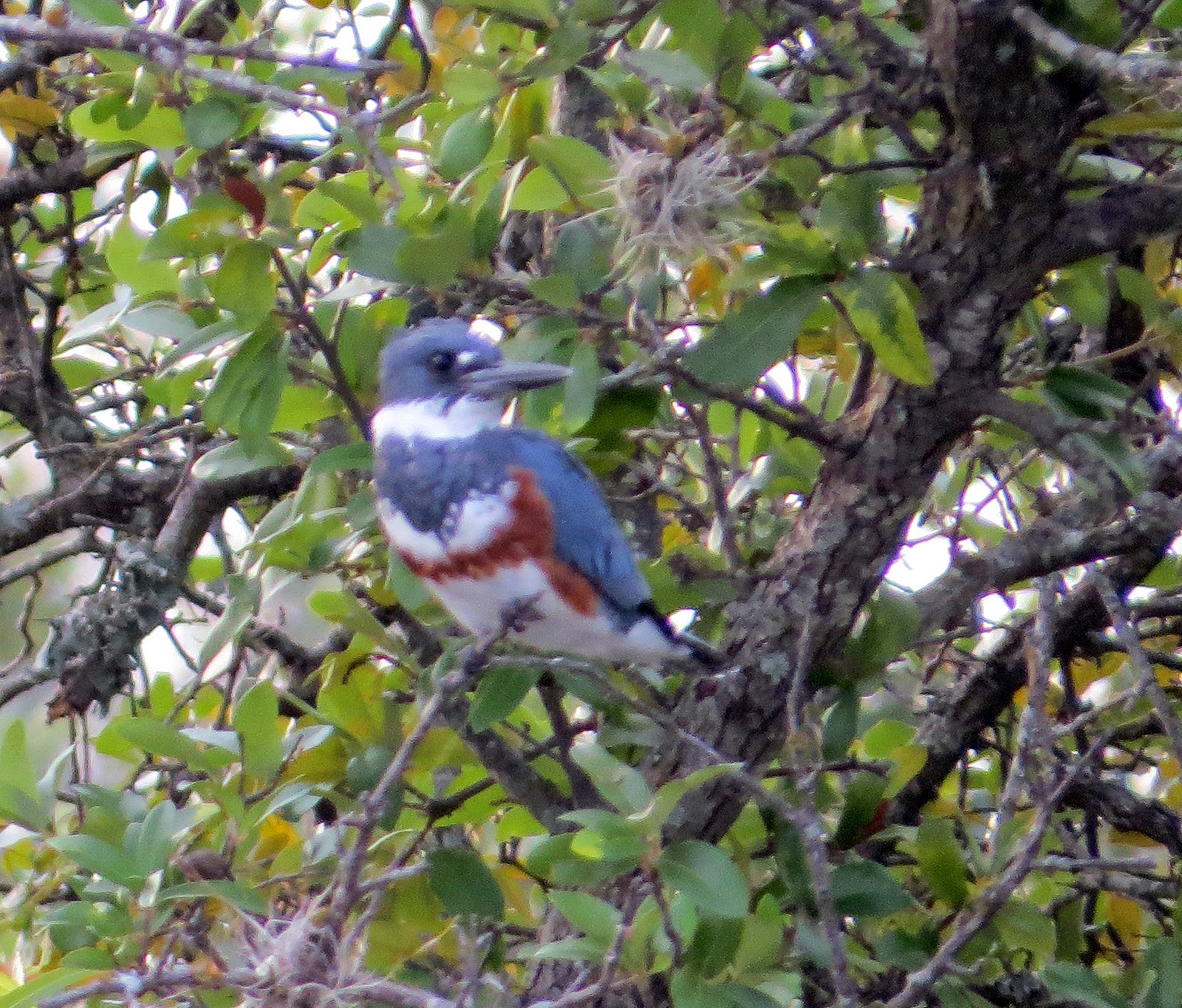 I thought this was my bonus shot of the day since Belted Kingfishers are a little uncommon. (This is  a female by the way, with the rust band under the blue band. The males just have the blue band. A little backwards in the bird world but there's always exceptions.) 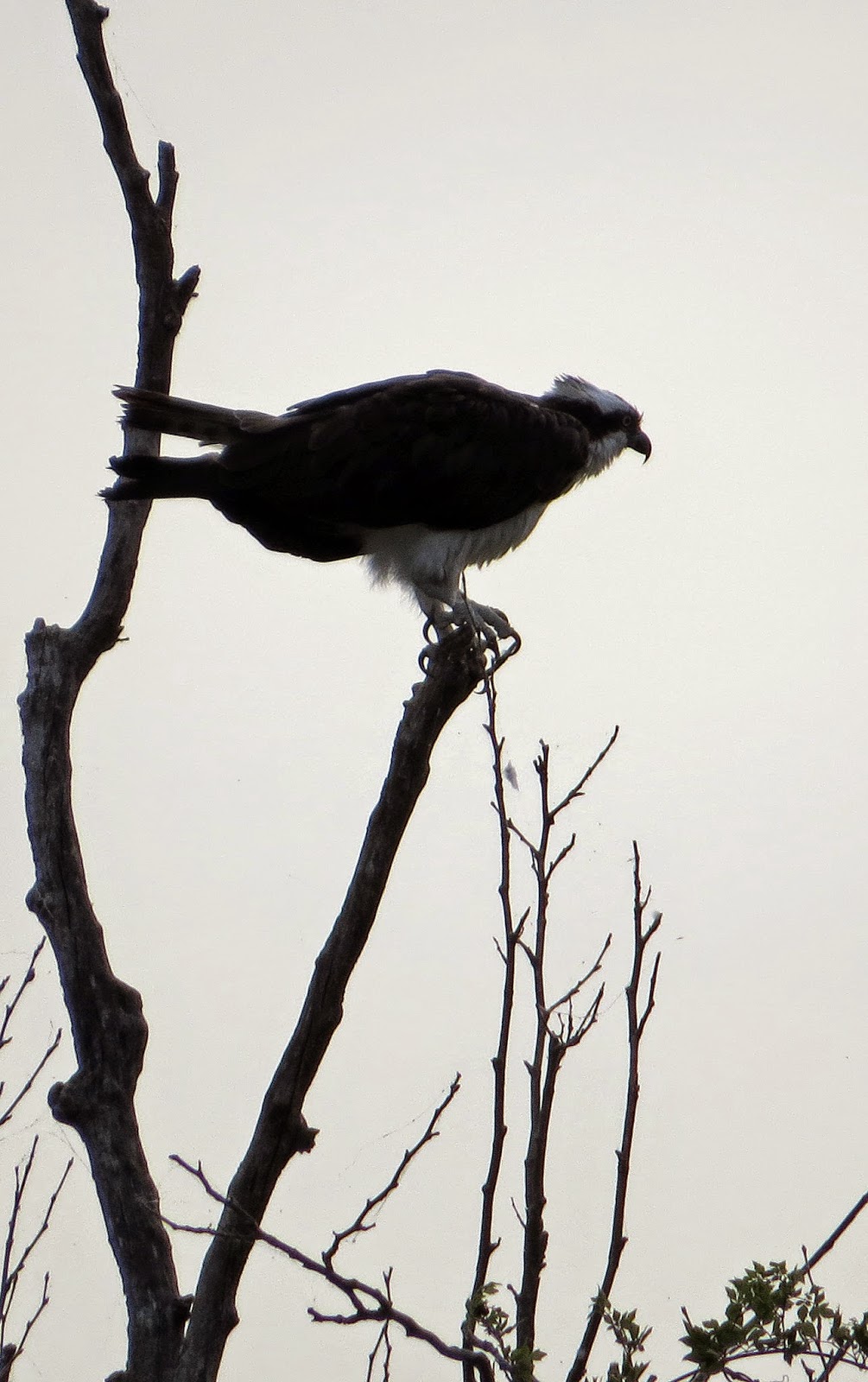 But then I caught sight of this guy.

He was a ways off and pretty skittish so as I drifted closer this is the last shot I got before he flew off. (I took more shots as he was leaving but my aim was terrible and I got nothing but sky.)

I was pretty sure I was mistaken until I got a closer look at the photos, but the white cap and dark eye-band had me thinking Osprey.

Except that Osprey are typically a saltwater bird of prey and it's fairly rare to find them around freshwater, especially freshwater nearly 200 miles from the nearest coast! 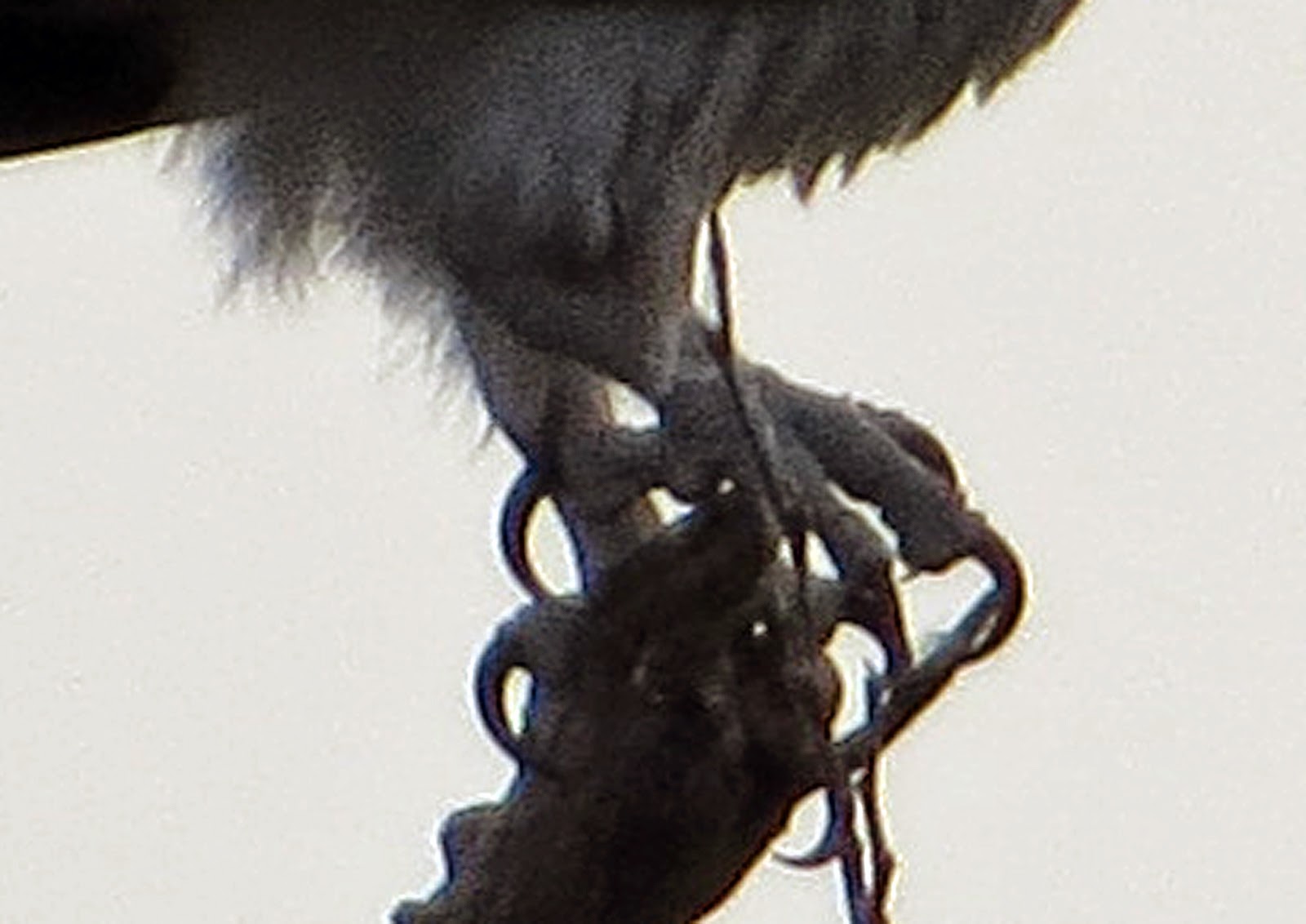 But a blow-up of his feet, an Osprey's grey feet, pretty much cinched the deal.

And on that note it was time to head back to camp and call it a trip since, on the way back home, I was scheduled to meet my wife for a late lunch in a town still 2 1/2 hours away.