What if: Doors and Windows 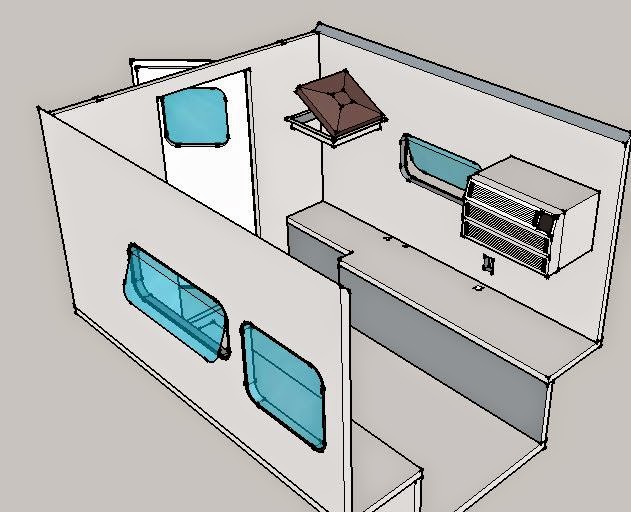 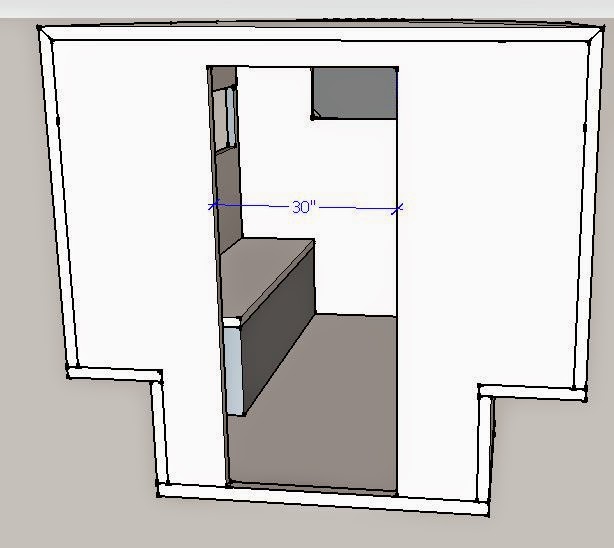 I could get away with a 24” door but experience has taught me to go wider if at all possible, so I’ve offset the door, which of course is in the rear wall of the camper shell, slightly to the left to allow for a 30” door while still staying clear of the fridge and portable toilet over on the right side. 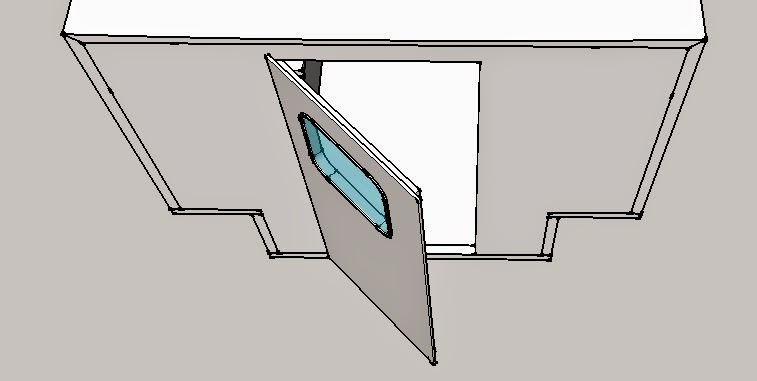 The door is right handed, which means when you pull it open, usually with your left hand, it swings to the left, (I know; confusing but nobody consulted me when "they" were defining left and right hand doors.) placing the opening to the curb side, which is either the side of the camper where the rest of the campsite will usually be located or the slightly safer curb side if not in a campsite. 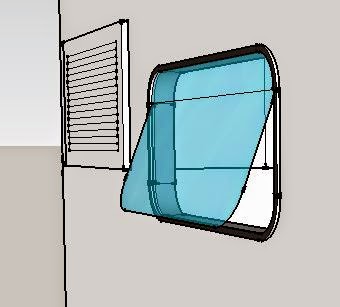 Good ventilation and lots of light are a must, not an option, in a small space. Therefore I’ve designed for maximum windows while still retaining enough wall space to fit in some interior bits.

I’m a big fan of vent or awning windows as opposed to sliders because the former can be kept open in all sorts of weather that the sliders can’t handle. (I pretty much leave the awning windows on the van open all the time unless I'm actually going down the road.) This led me to the Hehr 4800 series vent windows.

The two opening windows opposite each other in the sides of the shell are about 14” high and 36” long and the bottom portion will open outward. 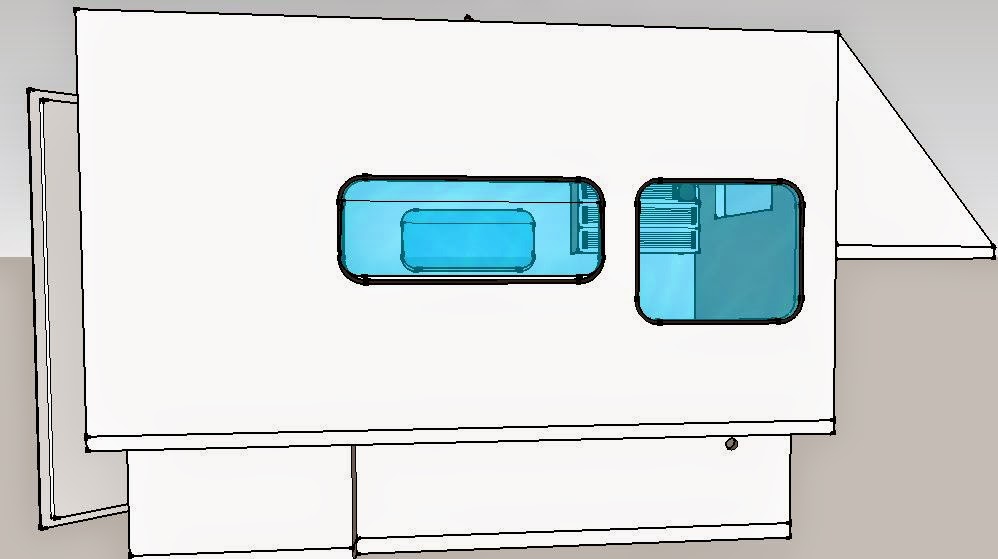 In keeping with RVIA (Recreational Vehicle Industry Association) design standards which stipulate that most RV's need a second means of egress, there is a 20” high, 24” wide escape window installed forward of the curb-side window, over what will be the head end of the bed.

I have the top edge of this window in line with the top edge of the awning window. If I decide to go with the clipped-corner shell this keeps the top of the escape window below the - well, the clipped corner. If I go with the straight sided shell as drawn here I could raise the escape window so its bottom edge is even with the bottom of the awning window. This gets the window up and a way from the pillow, (More coming on that, pillow location, soon, promise!) which might be a good thing, but then if I need to use the escape function the ground is a bit farther away. . .

I used to be able to download  the RVIA Standards for Recreational Vehicles for free but now it appears to cost nearly $50. Good thing I held onto my old copy. I'm not a fan of government or other 'experts' sticking thier noses into my business, but I'm not at all shy about understanding and addopting or bettering various codes and standards for my projects. For instance, I  wired our barn and living quarters to meet or exceed NEC 2004, (The National Electrical Code in effect when we built the place.) even though there is no requirement for permitting or inspections in our neck of the woods.

Anyway, as I was about to say before that sidebar interrupted me; it’s not clear to me if the Hehr full escape window has a screen and can be tipped out like an awning window for ventilation, but the one in my father-in-law’s travel trailer does.  That would be good because that window is in the perfect spot for nighttime ventilation. 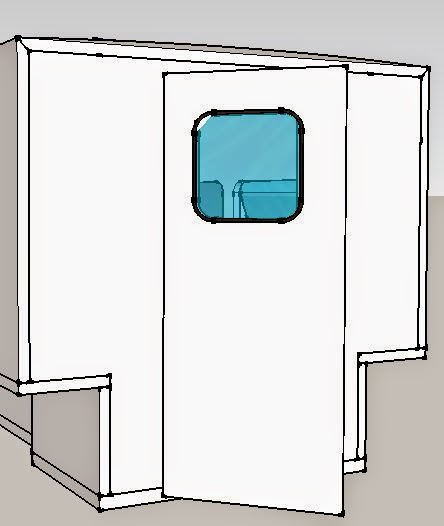 Also in keeping with RVIA design standards, which stipulate that there be no opening windows in the rear wall of a motor home or slide-in camper, (To prevent exhaust fumes sneaking in.) the rear door will not have an opening window but rather an 18”x18” fixed window for light and viewing. (So you can make sure it's not a pissed off bear knocking at the door!) 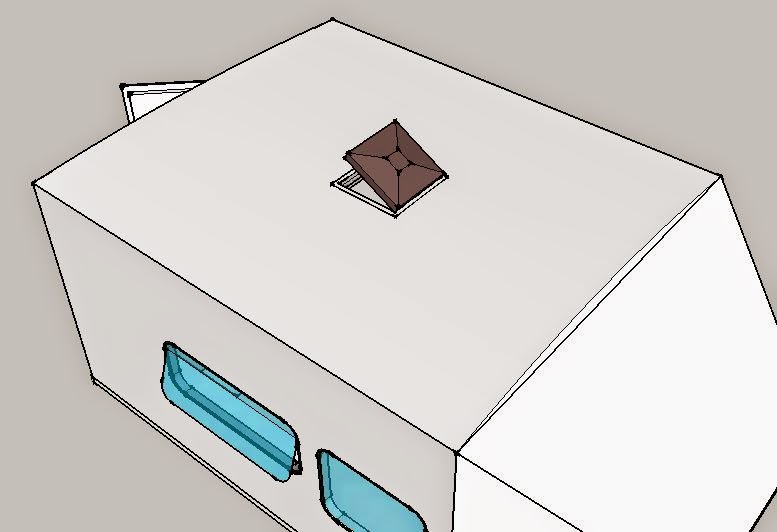 And to round off the ventilation there will be a vent in the roof. This will be the Fantastic Vent with motorized open/close, rain sensor for auto closing, three speed fan with the option of in or out flow, and a thermostat control to automatically start and stop the fan.

The vent will be located in the center of the roof because this gives the best overall coverage and places the vent over open floor instead of something more delicate, such as the bed, in case the auto-close function fails when it starts raining.

Somewhat related to ventilation is the question of an air conditioner. I had entertained doing away with this particular annoyance by removing the unit on my van and replacing it with a second vent, but in the past two years my attempts at avoiding camping in weather requiring said air conditioner have not been very successful. So bowing to the inevitable, I am making provision for an air conditioner in this camper as well. 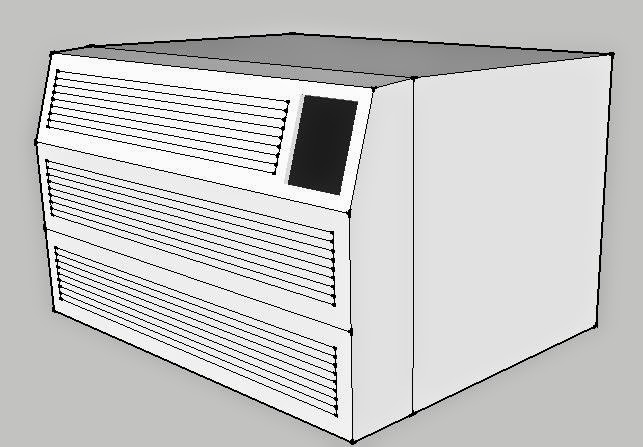 Rather than go with the traditional RV rooftop unit which puts an extra 100 lbs. plus wind resistance and additional height on top of the highest point of the camper where it does the most harm, not to mention getting in the way of solar, (But then I just mentioned it didn't I. . .I’m opting for a through-the-wall unit.

These are very similar to the ubiquitous window air conditioner but are designed to operate from inside the wall rather than outside, requiring something like only a half inch projection beyond the wall. While not common, I’m seeing more and more of these used in RV’s; the retro trailers by Riverside being an example.

While this does eat up interior storage space, it also lets me get the weight of the unit down off the roof and reduce the windage to pretty much nothing. If set up properly, and I felt up to wrestling with the 80 pound beast, I could remove the unit when I know I won’t need it, such as winter and/or boon-dock camping, and close off the exterior opening left behind with an insulated panel similar to an exterior compartment door.

More detail on how and where the air conditioner actually fits in the upcoming post on the bed area.