What if: Size does matter!


(You didn't think I was talking about THAT size matters issue did you??)

By building to generic dimensions I’ll, hopefully, be able to get the camper into any somewhat standard pickup bed. If the bed isn’t standard I’ll just avoid that truck.

So what are generic dimensions for a slide-in shell?  Well the lower portion of that is pretty much dictated by the shape and size of the pickup bed and during my research I found a site with technical documents on Ford pickups that went back to the year 2000. After combing through them this is what I have for the ‘standard’ pickup bed. Where there were variations in dimensions over the years, which were actually very slight, I chose the most restrictive.

Before I move on I want to point out that, research aside, if and when I get to the point of building this camper I will first confirm all dimensions against an actual pickup because it would be really annoying to have to take an inch out of the middle after the whole thing is built!!

And from this, for a camper shell that will fit the ‘standard’ pickup bed, I came up with:

Floor width, (Where it needs to fit between the wheel wells): 48”

Leaving 1” of clearance between the wheel wells on each side of the camper shell gives me a total of 2” of play for backing the truck under the camper. Which doesn't seem like a whole lot when trying to guide thousands of pounds of truck under more than a half ton of camper, but compared to some I’ve dealt with, not too bad either. I had one camper with one quarter of an inch total clearance, one eighth of an inch on each side! Now that was a difficult camper to load!! But since I designed and built the thing myself I guess it was my own fault. . .  Anyway after that, 2" should feel downright decadent.

Distance from front wall to behind wheel wells: 72” 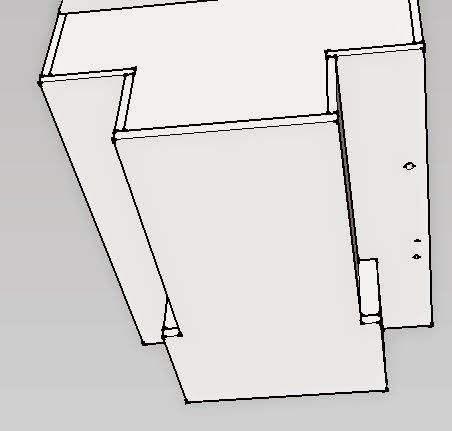 I had the option of leaving the floor width of the shell 48” for the entire length front to back and the simplicity of this has a certain attraction, but I chose to accept the complication of widening it out to 58” aft of the wheel-wells. That might seem like a lot of complication for a mere 5” increase in width per side for the last couple feet, but that change allowed me to move the toilet from the under the bed up front to next to the back door. More on that later.

Keeping this dimension, the height at which the camper shell ‘wings’ reach out over the pickup bed sides, as close to the floor as possible helps with seating height inside, but I didn’t want to get into a situation where the ‘wings’ sat down on top of the bed rails before the floor sits down on the bed bottom.  If it were to happen it wouldn’t be a disaster or anything, all I’d have to do is add blocking to the bottom of the shell to fix the issue, but I also want the shell to sit as low on the truck as possible, so I’d rather avoid having to add any blocking like that.

To that end I set the shell wings 1.5” above the top of the pickup bed sides. 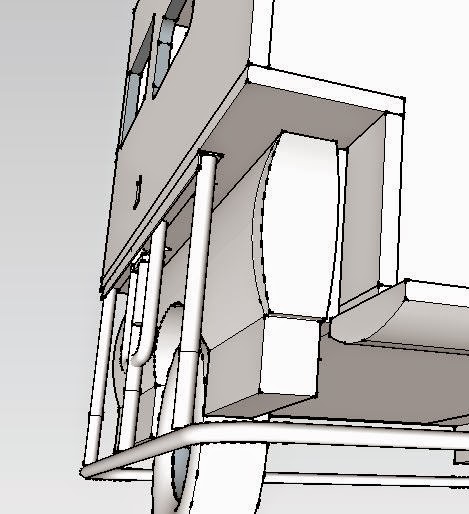 Now that I’m up above the bed rails I'm not so limited anymore. In fact I could go as wide as the pretty common RV width of 102", except that legaly there's a problem with that.

Don't expect the RV dealer to tell you this but something like 19 states have varying restrictions on 102" wide loads. Basically as long as you stay on, or within a few miles of the Interstate, which is under federal control, you're good. Outside of that you're fair game in a significant number of states.

True, there doesn't seem to be any real enforcement of the 102" width ban, at least for RV's, but if Billy-Bob-Yahoo is blasting down one of these restricted roads in his $200 rattletrap Pinto talking on his girlfriend's mother's 'borrowed' cell phone and drifts into your lane, sideswiping your 6-figure, over-width RV, he just might turn up in a body cast toting along a savvy lawyer that is intent on turning the whole thing back on you for endangering his client by operating an illegal vehicle.

I personally don't see the upside of taking the risk.

But then I have no interest in going that wide anyway because, in terms of fuel economy, less is more once you get any wider than the pickup cab.

In my case the ruling factors for width were the length of the crosswise bed and fitting the jack system.

Unlike traditional camper-jacks which hang on the corners and can use hinged extensions on the front jacks to temporarily clear the sides of the pickup bed for loading and unloading a narrow camper, the Stable Lift system I want to use requires enough width in the camper shell that they can fit under the edges of the 'wings' and still clear the pickup bed.

I decided to allow for ~ 2” of clearance on each side between jack-tubes and bed-side. This is slightly more than the internal clearances I allowed for between the wheel wells which creates a small built-in safety feature during loading and unloading.

The thinking is, assuming I'm backing in somewhat straight, I'll run the side of the camper shell into the inside of a wheel well before I have a chance to slam a jack into the outside skin of the pickup bed. Of course this is mostly a psychological safety factor since it only starts working once I've backed in far enough for the front of the camper to reach the wheel wells in the first place.But hey! I'll take all the help I can get!!

Allowing for 2” jack tubes and no cantilever (The jack tubes fit completely under the edge of the camper shell without sticking beyond at all.) the total width of the shell comes to 88”. After deducting 4” for wall thickness the inside width is 84”. This is clearly wide enough to accommodate the crosswise bed I want so let's stop there. 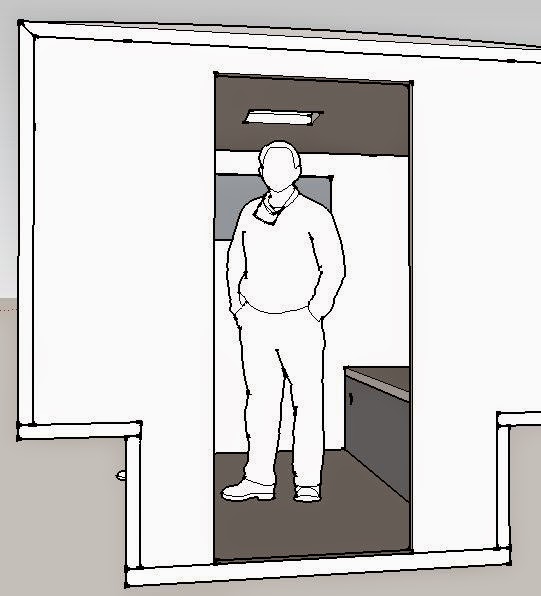 OK, one thing I’m not a fan of is over-cab beds, slide in campers or class C's, doesn't matter. Either way they’re a pain to get in and out of, and even worse to make up, especially if you’re aging; and who’s not?

By opting to forgo the over-cab bed, instead of designing for adequate overhead clearance for said bed, the ruling factor on the height of the camper shell then becomes standing headroom.

I know that in general we’re growing taller, but last time I checked, I’m as tall as I’m going to get. The van has 6’3.5” of headroom which I find plenty so the shell will have 6’4” (Didn’t want to mess with that half inch.) Allowing for 2.5” of floor thickness and 2” of roof thickness + 1” of roof bow (to ensure water runoff.) sets the overall shell height to 81.5".

Yes, as a 5'10", and shrinking, person, in theory I could have lowered the roof even more, but that's in theory. I've found that the real world requires a few extra inches over the top of my head to be truly comfortable. (It also keeps the knob for the roof vent from creasing my already convoluted skull!)

To overhang or not to overhang??:

That is the question. 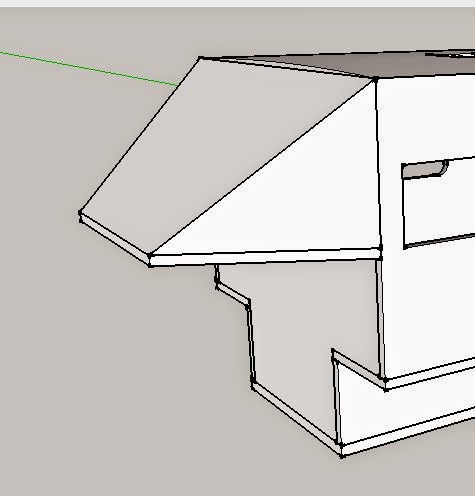 Since I’m not putting in an over-cab bed I have the option at this point of leaving the front wall of the camper shell an unbroken vertical, but, with the roof of the truck only being about 45” above the floor of that pickup bed the 81.5” tall camper will be sitting in, that leaves pretty near 3 feet of forward facing verticality to punch through the air at highway speeds.

I could mount one of those adjustable wings on the roof of the truck to push the air up and over. Despite being somewhat clumsy this would greatly simplify the construction of the camper shell, but by building the ‘fairing’ into the shell itself I can add some significant storage space ideal for light things like extra bedding and a basket or two of socks and underwear, and when the camper is off the truck so is the fairing, all in one easy step.

Some manufactures today are building slide-ins with an overall length of nearly 20' and floor lengths just short of 12', with the whole thing weighing in at over 4000 lbs empty(!!!) but that’s just way too much for what I want to accomplish.

If I limit the shell length to 95” it will fit completely inside the bed and I’ll be able to close the tailgate on it. But what does that really do for me?

To paraphrase DOT requirements on securing loads, you should be able to turn the vehicle upside down and have the load stay in place. Yeah, I know, there’s a lot of loads going down the highway out there that clearly don’t meet this requirement, and I guarantee that the insurance companies like it that way since it gives them grounds for denying a settlement. (Especially if you've already introduced them to Billy-Bob-Yahoo and his lawyer in a previous event!) Me, I don’t want to be one of those careless people endangering the others around me.

So the ability to close the tailgate on the camper doesn’t really help much as far as securing the load; and I have nightmarish thoughts of someone stumbling along in a truck stop parking lot in the wee hours and running into the open tailgate then slamming it closed in anger, trapping me inside the camper. 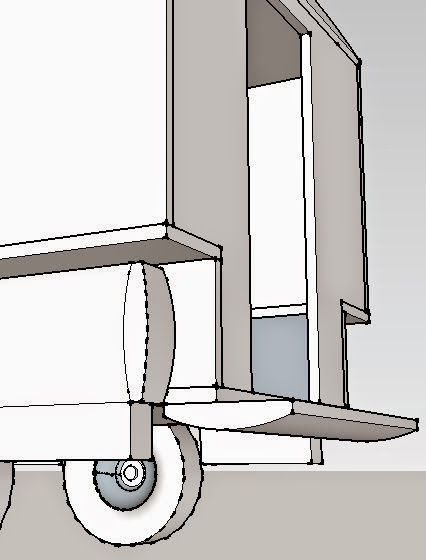 So as far as I’m concerned there’s not much of an argument for limiting myself to tail-gate-closing-length and at least one for not doing so.

If I discount the last 24" of rear storage area in the van, the remaining floor length is about 105”. That may not sound like much of an increase over the tail-gate-closing 95", but the pull-out pantry in the van is only 9" wide yet I can get a whole heck of a lot of stuff into that space. So, although it’s a little arbitrary, I settled on a floor length of 105”

Now if I chose to leave the tailgate on and lowered when carrying the camper, which I don’t think I would but at least I have the option, the shell is long enough to prevent the tailgate being closed yet short enough to leave about a foot of tailgate/porch exposed so my foot won't slip off as I step out. If I choose to travel without the tailgate (One night many many years ago, unbeknownst to me, one of the local TV news stations decided to show how easy it is to remove a pickup's tailgate and steal it. The next morning mine was gone. . .) the camper shell is still short enough to end right about even with the bumper and therefore won’t interfere with towing something on a standard receiver hitch. In either case, tailgate on or off, this overhang is short enough that the truck’s taillights are not obscured by it, eliminating the complication of wiring the shell for lights.

So now I have size, next will be a look at shape.