What if: Getting it on and off the truck


Before getting to the interior of the camper there's still a couple items on the outside to discuss, not least of which is the system for getting the camper on and off the truck and making sure it stays there. (On the truck that is. Loosing your camper while going down the road is a good way to ruin a perfectly good, or even a not so good, road trip!)

By far the most common standard here is to use corner jacks and tie-downs. 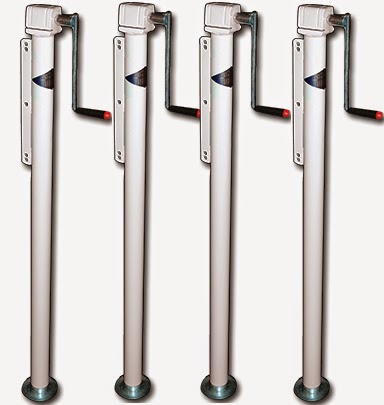 The corner jacks can be manual, which are not very conducive to frequent use and require running around and around the truck lifting or lowering each one a few cranks at a time so I don't get everything irrevocably out of balance. And believe me, having a camper weighing a thousand pounds or more towering high over my head while tottering on 4 spindly jacks is not a time I want anything to be getting out of balance!!

Electric corner jacks with a remote are much easier to operate, therefor likely to get used more often.With this setup I push either the up or down button to move all 4 jacks together. If things are out of sync, such as uneven ground under the camper, I can operate each of the jacks independently to get everything lined up again. All by straining only my thumb muscle.

I've used both setups in the past and frankly I was glad to see the last of the manual system when I sold that camper on. It was such a pain that I used it a total of four times. Once to load the camper into the truck the first time, once to set the camper off at campsite, once to retrieve my camper from that campsite, and, because that campsite experience was such a hassle, only one more time, when I pulled the camper off the truck so the new owner could back under it. All in all those manual jacks, though they initially seemed reasonably priced, turned out to be a pretty poor investment.

The electric jacks, though much easier to operate, still didn't see all that much use until I repurposed them by putting them upside down inside my next design as the highly over-engineered lift system for a lift-top camper. (The jacks were capable of lifting a total of 8000 lbs but the lid of that camper weighed less than 300 lbs.)

In addition to dealing with the jacks when dropping or picking up a camper, there's also the tie-downs that have to be futzed with.

To make sure the camper stays on the truck where it belongs and, more importantly, to protect the safety of the other people sharing the road with me, there must be some way to securely fasten the camper to the truck. 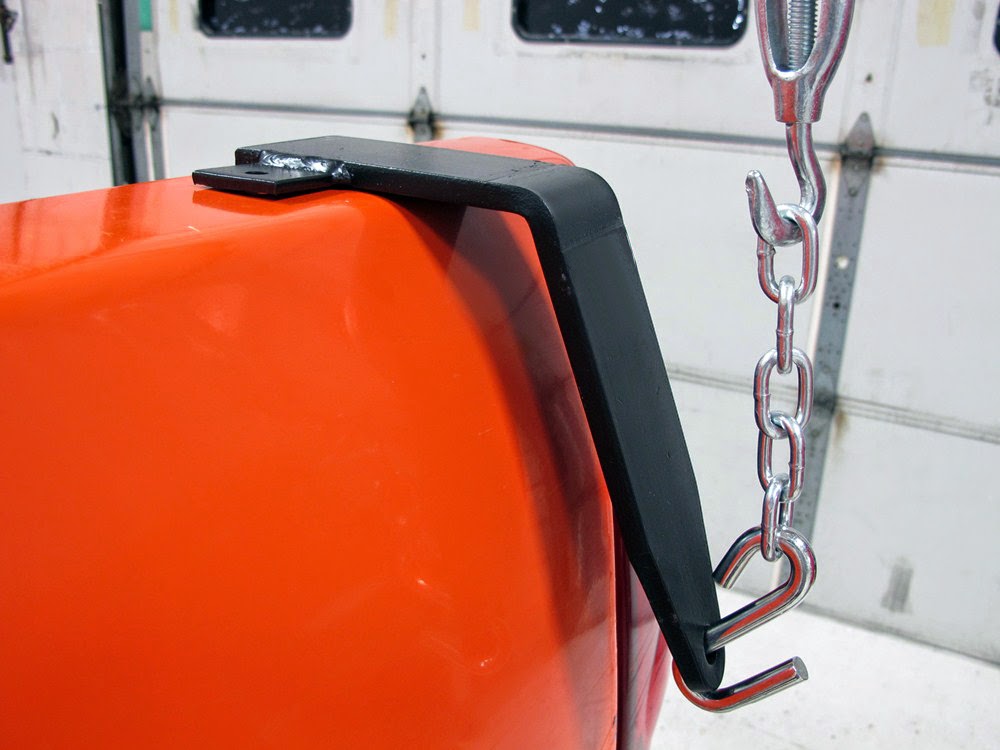 The most common camper tie-down system consist of 4 brackets that fit into the stake-pockets or bolt down on top of the pickup bed rails, 4 rings attached to the camper itself, and 4 turnbuckles to go between the brackets and rings.

The brackets and rings are pretty simple. Once the rings, usually eye-bolts, are installed in the camper shell (Hopefully well caulked so they don't allow water in and rot to start.) they just stay there, The simplest brackets drop into the stake pockets and may or may not have a set screw to keep them there. (Some systems engineered for lighter weights just use the torsional racking as the turnbuckle is tightened to jam the bracket into the stake pocket.)

But to use the dang things requires running around the truck once again while screwing/unscrewing each turnbuckle individually, and I know from experience that no matter how well they are plated, turnbuckles will corrode which makes turning them by hand really hard!

In this photo of one of my creations from the mid 90's you can see a couple of the electric corner jacks for lifting the camper on and off the truck. The black T-shaped pieces hanging off the lower edge of the camper are steel tie-down plates bolted into the camper shell. If you look closely at the side of the truck's flatbed you can see 3 bright spots. These are the corresponding bolts that go through the tie-down plates and keep the shell in place on the bed. These plates only cleared the flatbed by 1/8th inch on each side so it required some precision backing to load this thing!!

Even though this system was much simpler to use than the previous camper's manual jacks and turnbuckle tie-downs, this was one of probably less than a dozen times I actually took the camper off the truck. If I remember right, this day I was helping someone move a hot-tub, of all things. . .

So, realistically, in order to take full advantage of one of the key traits of a slide-in camper, the ability to slide it out again, short of carrying along my own personal helper to do it for me! I need a reliable lift and tie-down system that's as hassle-free to use as possible.

For this I’m looking at the Stable-Lift system. (Check your speaker setting before following that link. The Stable-Lift home page has an audio file attached that sounds almost, but not quite, like the theme from Bonanza, and it's loud!) 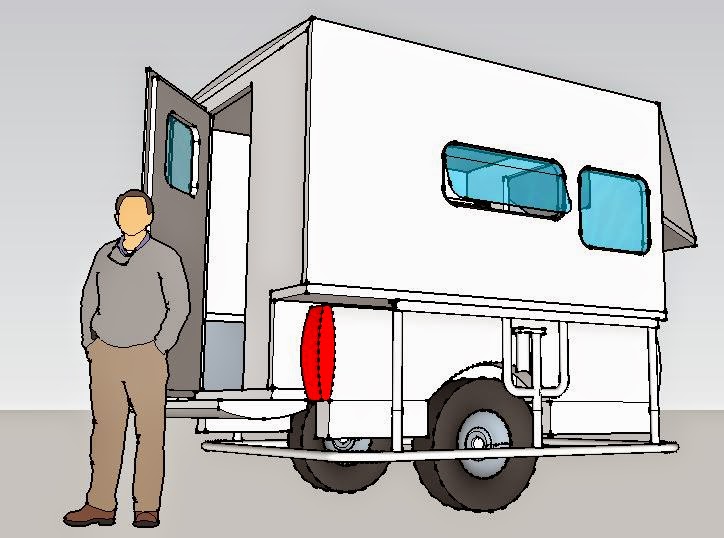 Compared to the traditional corner jacks, it looks awkward, a little like the truck/camper is dragging its skirts, but has some real advantages, advantages that fit right in with my requirements for an easy to use, quick and stable system.

The system operates off 12 volts from a simple control panel. Lower the jacks and the camper is lifted on a a nice large, interlocking platform so the truck can safely be driven out from under, or back under, the camper.

When off the truck with the jacks lowered, (Retracted) the camper is nice and close to the ground and pretty dang stable just as it is.


I've never quite understood the obsession with jack-standing a motorhome, travel trailer or camper to nearly high-rise foundation standards, but apparently any movement of the RV by wind or bodies moving around inside bothers some. In that case, instead of bulky and troublesome jackstands or some other form of blocking, the inherent design of the Stable-Lift system stops fore and aft movement and the system comes with a couple of diagonal stabilizers that go from camper shell to jack system that stops any sideways movement. 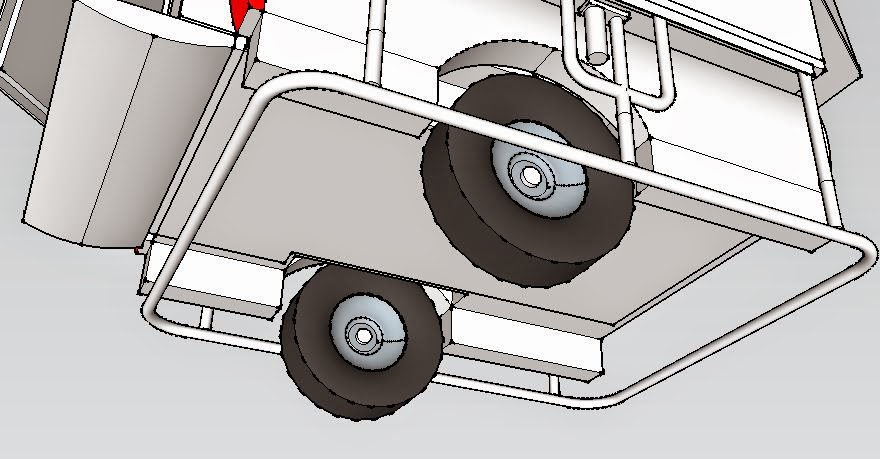 As for securing the camper to the truck, with this system it's as easy as retracting the jacks.

When the jacks are retracted the rectangular frame that helps make the system stable in the first place lifts up into brackets or saddles attached to the truck frame and secures the camper without the need for any other tie-down systems.

5 minutes to get the camper off the truck and ready for occupancy and 5 more to load it back up. And not having to break camp every time I want to drive to the trail-head sounds pretty good after living with small motorhomes that have to go with me on every little trip.