Colorado Bend State Park: An interlude along the river, Part 1


First off, to avoid confusion among those not Texan, this is the Colorado River of Texas, not that other one.

It's 862 miles makes it some 600 miles shorter than that other Colorado River but it's still the 18th longest river in the US and begins, ends and flows entirely within, the state of Texas.

When I tried to make reservations at another park only to find it was full up even mid week in early November, I exhibited my remarkable ability to think fast, adapt to changing conditions on the fly, and make quick decisions then follow through on those decisions, and switched my focus to the Colorado Bend State Park instead.

OK, OK; before I buy into my own hype and risk my head swelling to the point of explosion here, I've actually had my eye on this park for quite some time and since I didn't want to waste a good looking forecast (For hiking anyway, though it was going to be way too cold for kayaking since a polar vortex was sweeping into the area!) it was pretty much a no brainer to switch directions.

The park lists 15 drive up sites (I'm pretty sure they're counting the campground host site in that 15.) yet at the time I make my reservation the system shows only 3 reservable sites still available and I quickly grab one of them, falling well within the published allowable limits of a maximum 30 foot self-contained rig. A full campground isn't ideal but there's some 32 miles of official trail within the park so it shouldn't be too bad.

There's no hookups in this park, the toilets are composting units and, though the web site says there's a shower available, it's a single, open-air rinse-off shower that I'm pretty sure I would not be availing myself of in the 30 to 50 degree weather that was forecast!

The web site also warns that most GPS's won't get you there so don't even try. Well I guess I'm old school since I use my GPS to tell me where I'm at, and from there do my own orienteering, and I drive by looking out the windshield and not listening to some sexy voice trying to pilot me right out into the middle of a corn field. Must be working because so far I've never driven down a boat-launch and drowned my vehicle while trying to get to the other side of the lake and there is a surprising number of people that can't say that!

On the big day I made my way to Bend Texas, some 25 miles west of Lampasas and the only river crossing in some 70 miles. In downtown Bend, at the corner of FM580 and CR442 I passed Bad Bob's Convenience Store and Saloon, the only commercial establishment in sight, and prepared to hit the 4 miles of gravel county road to the park entrance, followed by 6 miles of unimproved dirt road through the 5300 acre park to the headquarters and campground.

Just like the road leading into our home, the county roads here clearly used to be access roads within one of the larger ranches until divvying up the land among the relatives forced creating public easements so all the inherited ranchets would have access to public roads. And of course the county is more than willing to take ownership of these 'roads' if it means spurring development which increases property taxes!

Also like our road, they are cut into sections by cattle guards with open range between. But somewhere along the line the road fairies must have gotten involved because instead of gravel they were seal-coated right up to the park entrance. And that promised 6 miles of unimproved dirt within the park itself? Well that was even better paved than the county roads!

And remember when I took one of the last three reservable sites??  Well I don't know what that was all about!!! 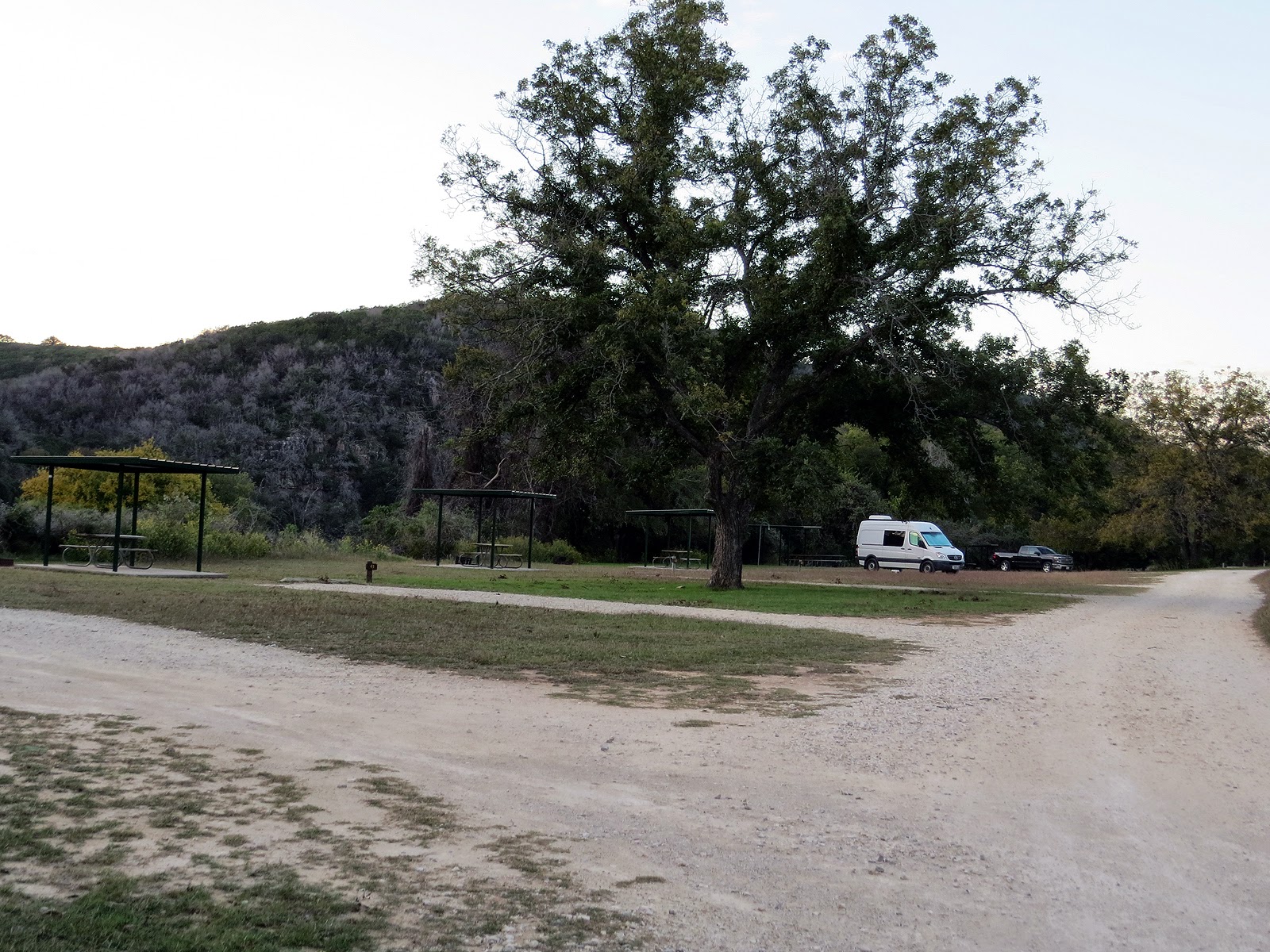 This is a photo of the 8 back-in sites on the river side of a natural bench above a bend in the river  (The river is over there to the left). As you can see, there's me and, a few sites farther down, a couple sleeping rough in the back of their pickup. 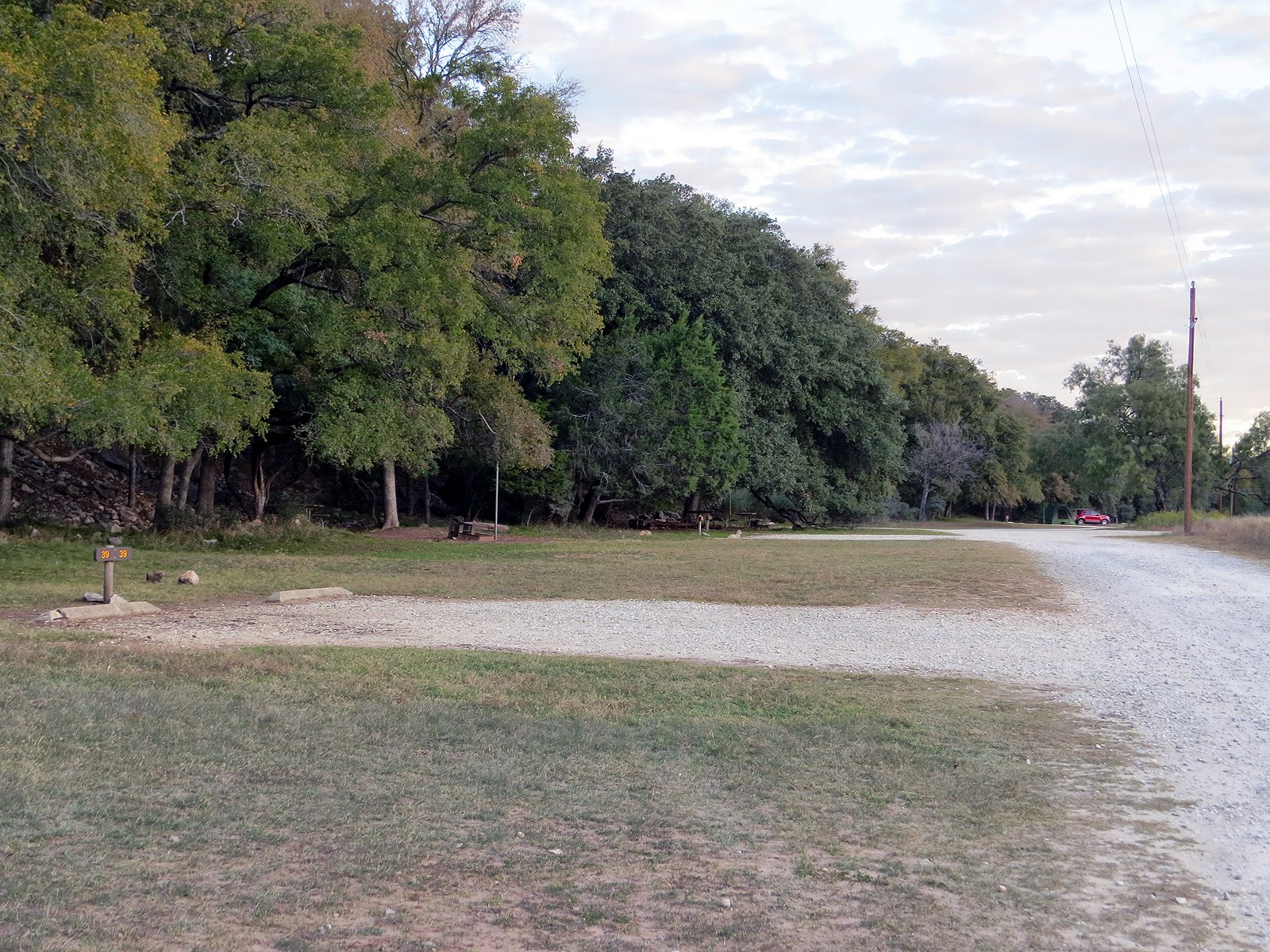 This photo, which I took while standing near the host campsite, shows the drive-up sites along the bluff side of that bench above the river. As you can see these are more suited to tent camping than rig camping as the parking pads are little more than 20 - 25' deep. And if you look close here you can see one more vehicle way down there towards the end of the road. And that was it for the the drive-up campsites. Three of 14 occupied not counting the host site.

Of the 28 walk-in tent sites, most located on another bench down closer to the river, only two were occupied, and that was the first day, by the third, other than the host I was the only camper in the park.

I guess that threat about the road conditions getting in here keeps the crowds down. Humm, on second thought, you know that bit I wrote about the roads being paved now??? Let's just keep that a secret. OK? 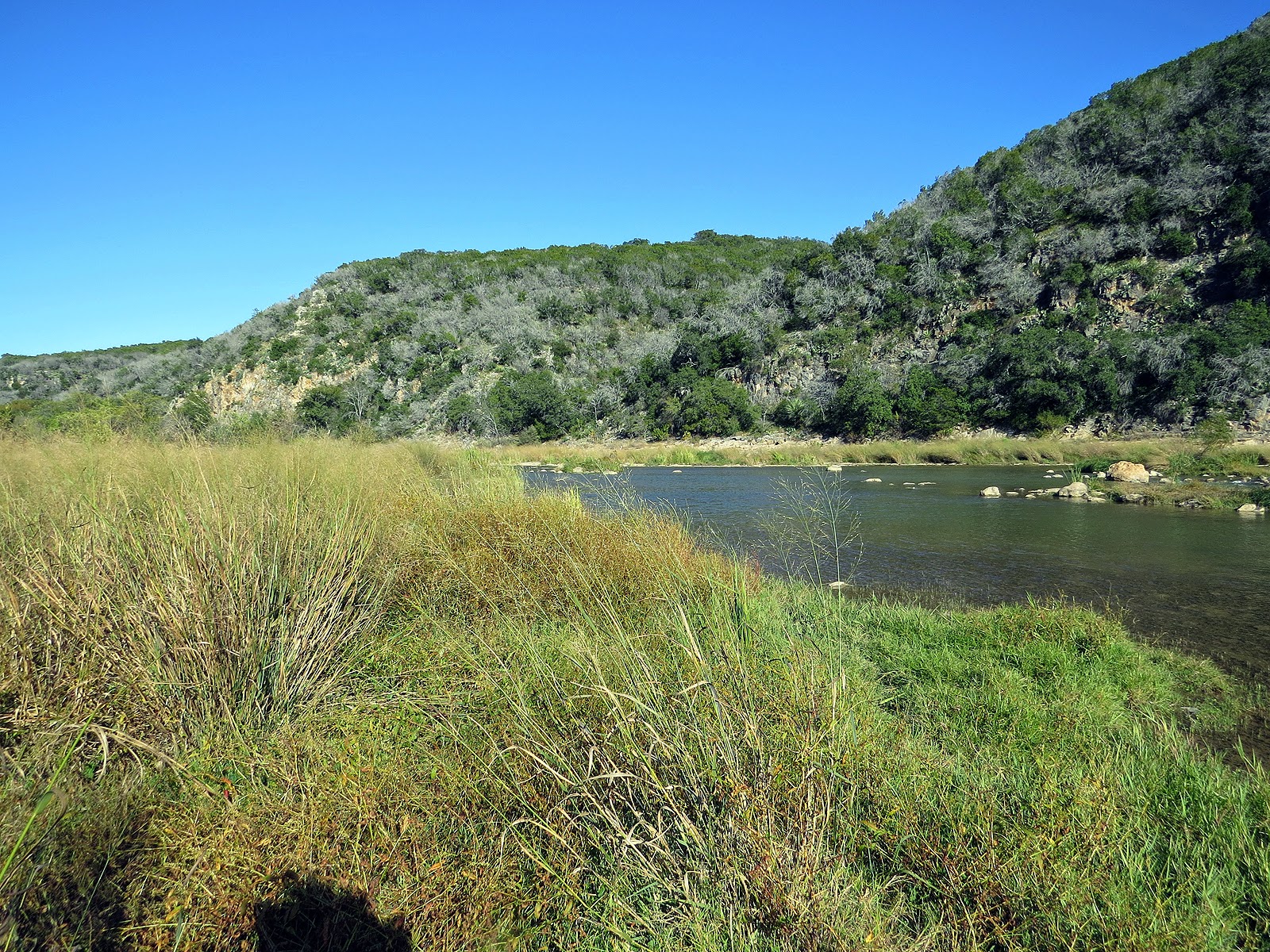 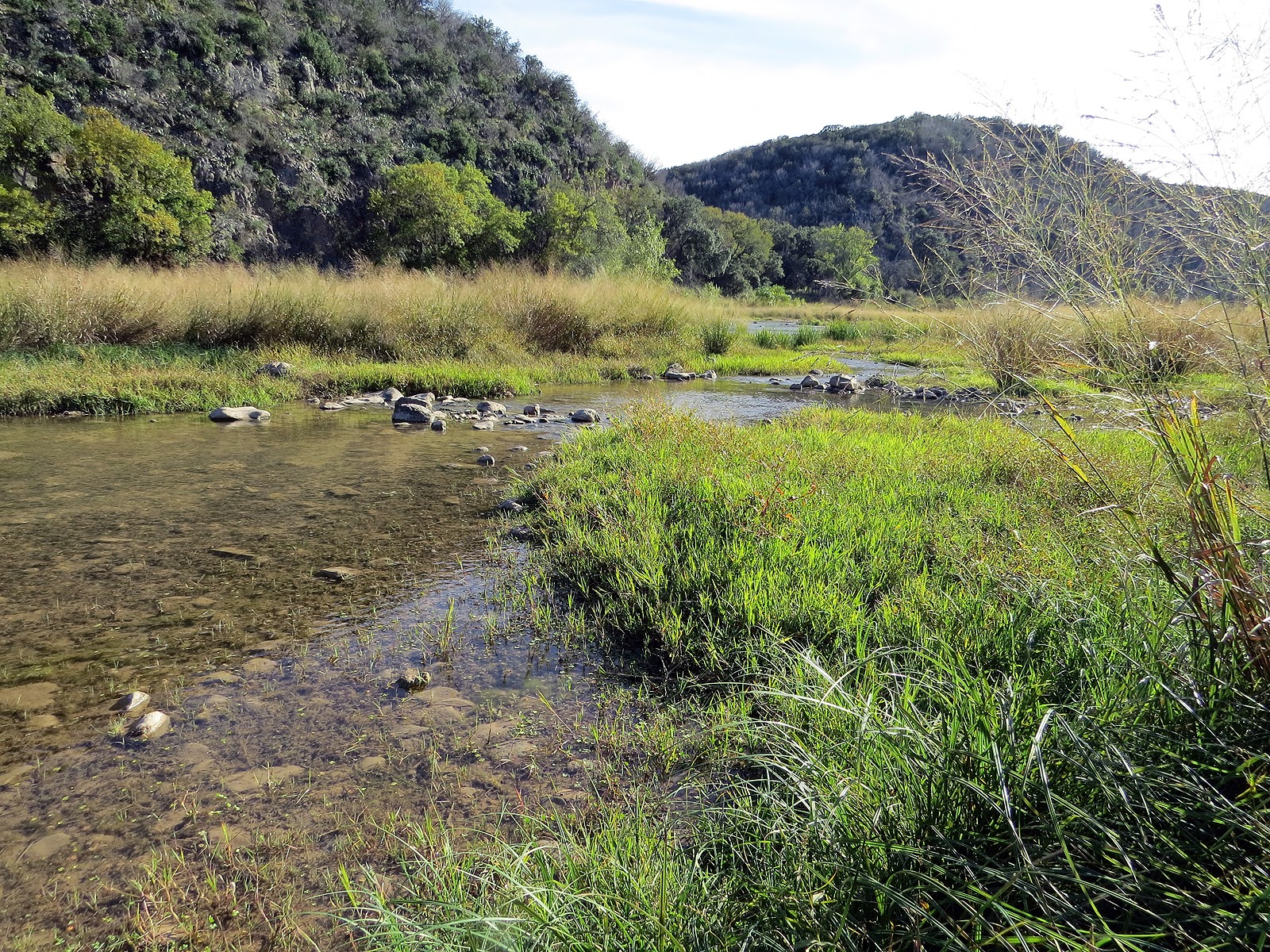 I was a few hours ahead of that polar vortex the afternoon I arrived at the campground and temps were in the high 60's under a largely cloudless sky, so I spent the rest of the daylight hours strolling a mile or so downriver to the day-use area and back, then lounging around in my chair with a small tub of humus, a handful of crackers and couple magazines under a convenient tree. 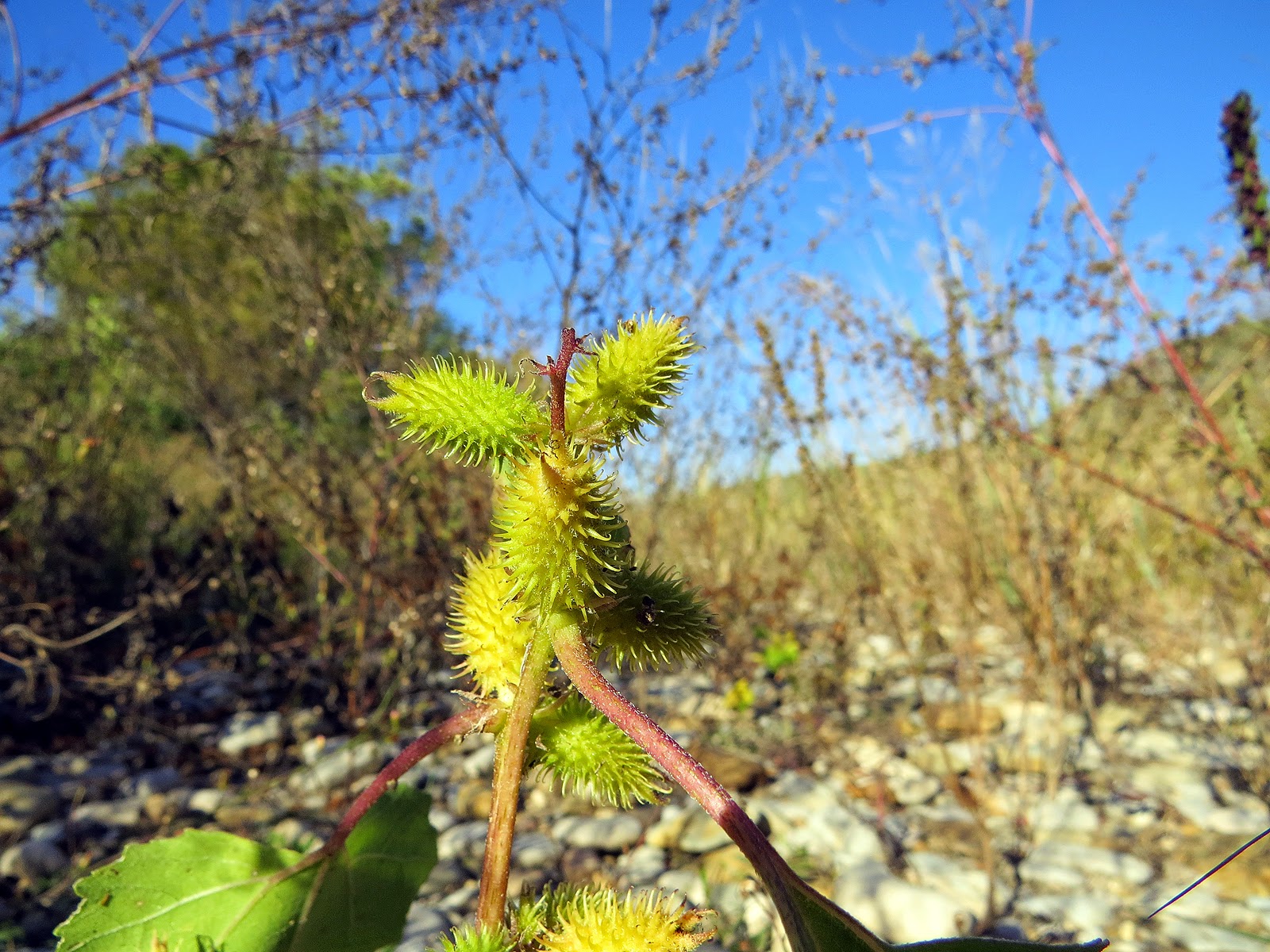 This time of year is burr season and I'm always getting stuck with the dang things because they end up populating my bootlaces and, of course, I forget until they're embedded in my fingertips and I'm dancing around muttering and spitting things I can't repeat around Mom, but there are burrs and there are burrs.  These things were the size of grapes!


I kept my distance and my bootlaces were thankfully monster-burr free. . . 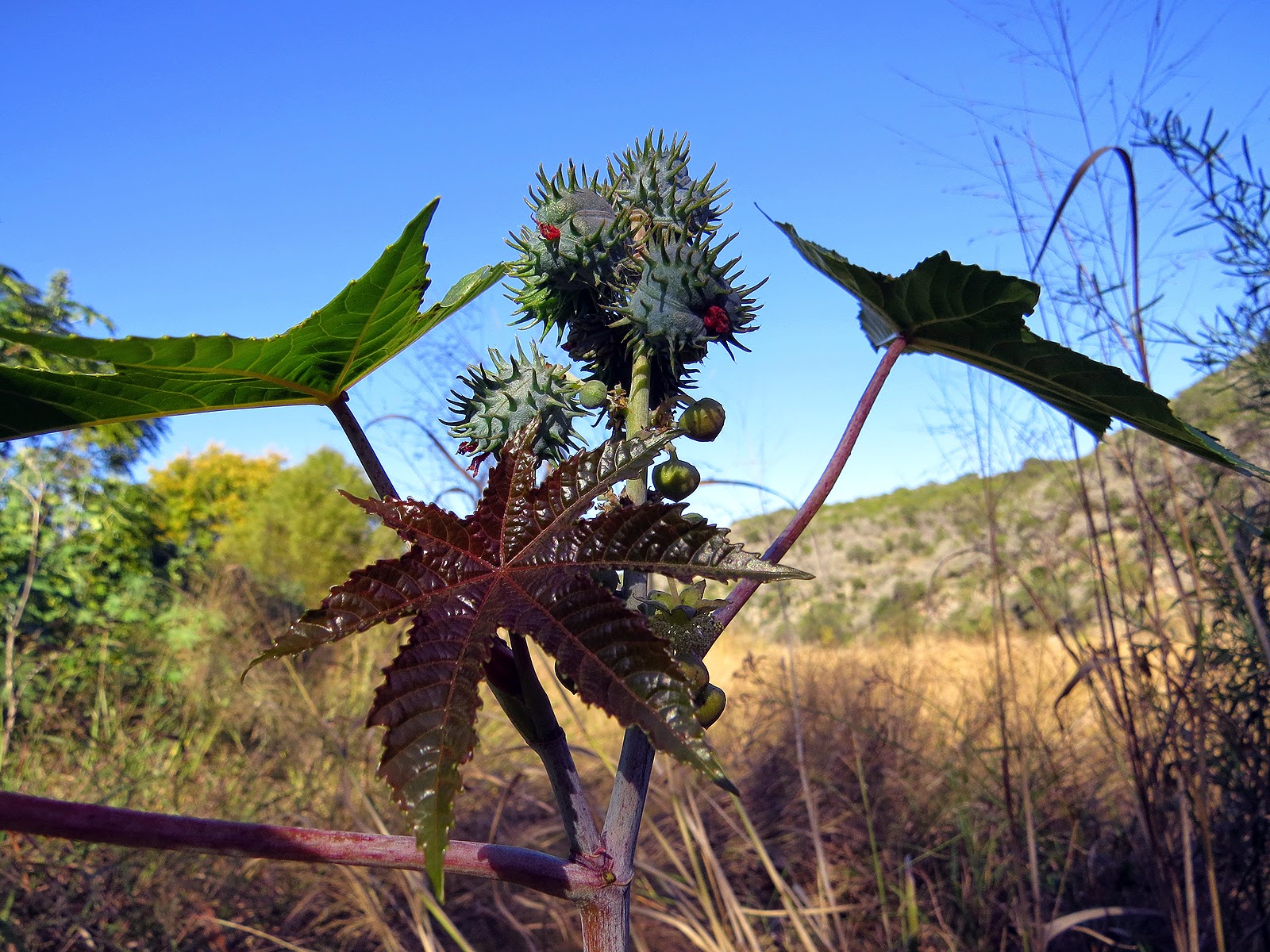 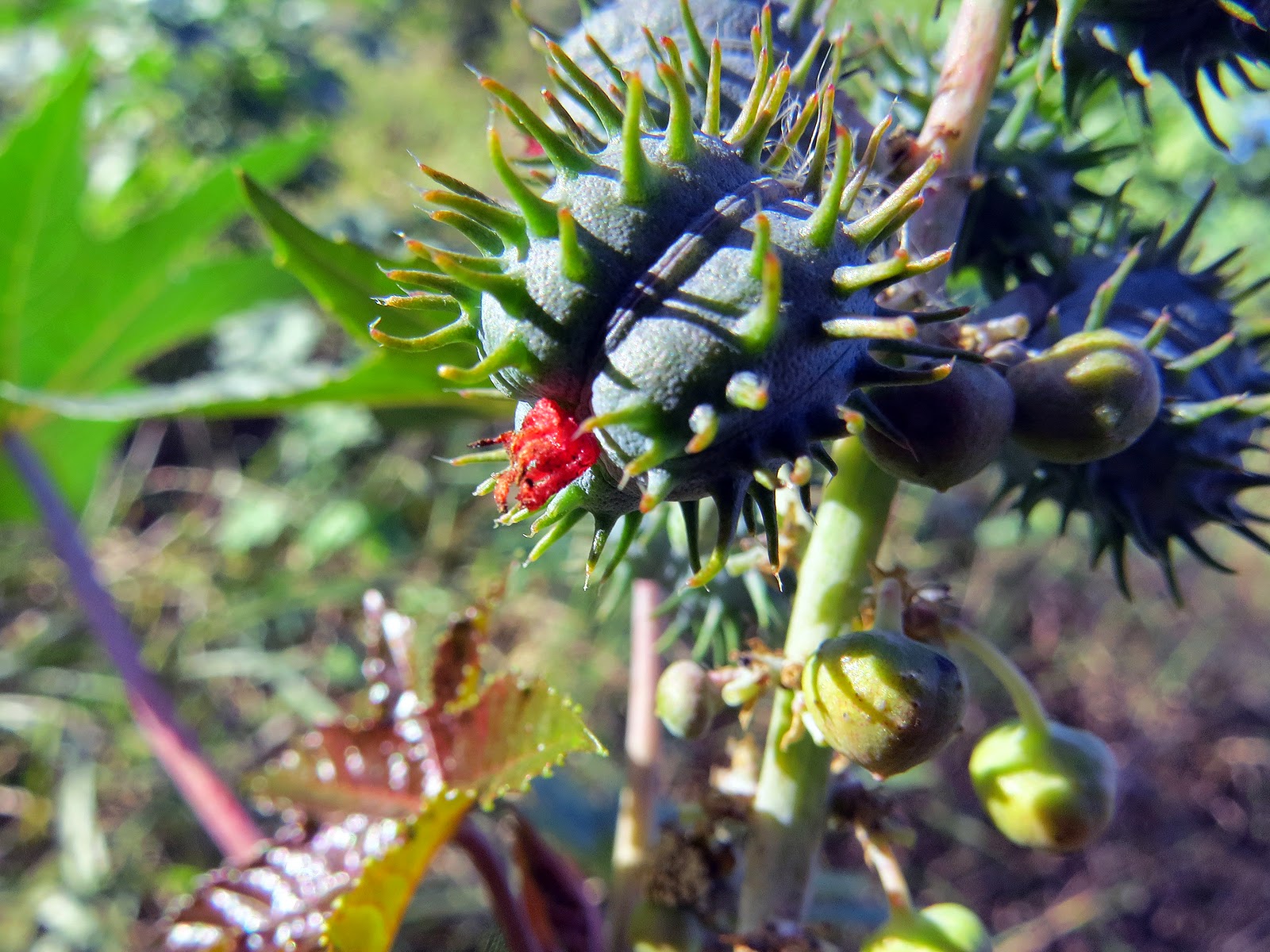 And I have no idea what this thing is called but it sure was interesting, with large, bold green leaves, smaller, shiny deep red leaves, round berries of some sort on long drooping stalks with larger spiky balls shading them, and even little red globs of some sort of thick petaled flower that looks like it has been squeezed out of some of the spiked balls. 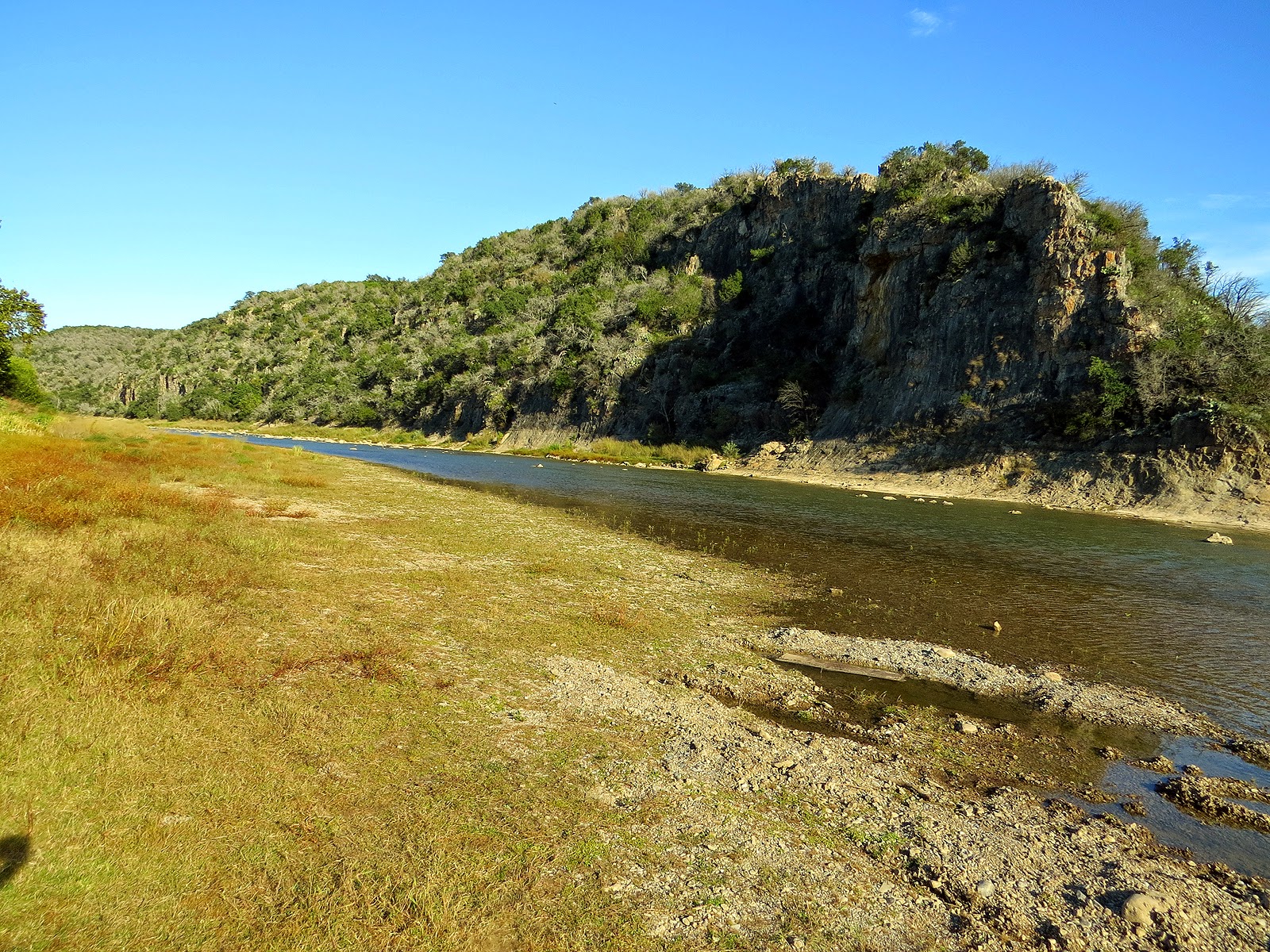 The Colorado is no longer a wild river, but from here the nearest dam is about 100 miles upstream and even several years into a severe drought there are signs of occasional high water. It's pretty wade-able right now, but this is flash flood country so it's worth keeping an eye on the weather upstream, especially if you have somewhere to be since there are several low-water crossings on the road into here. 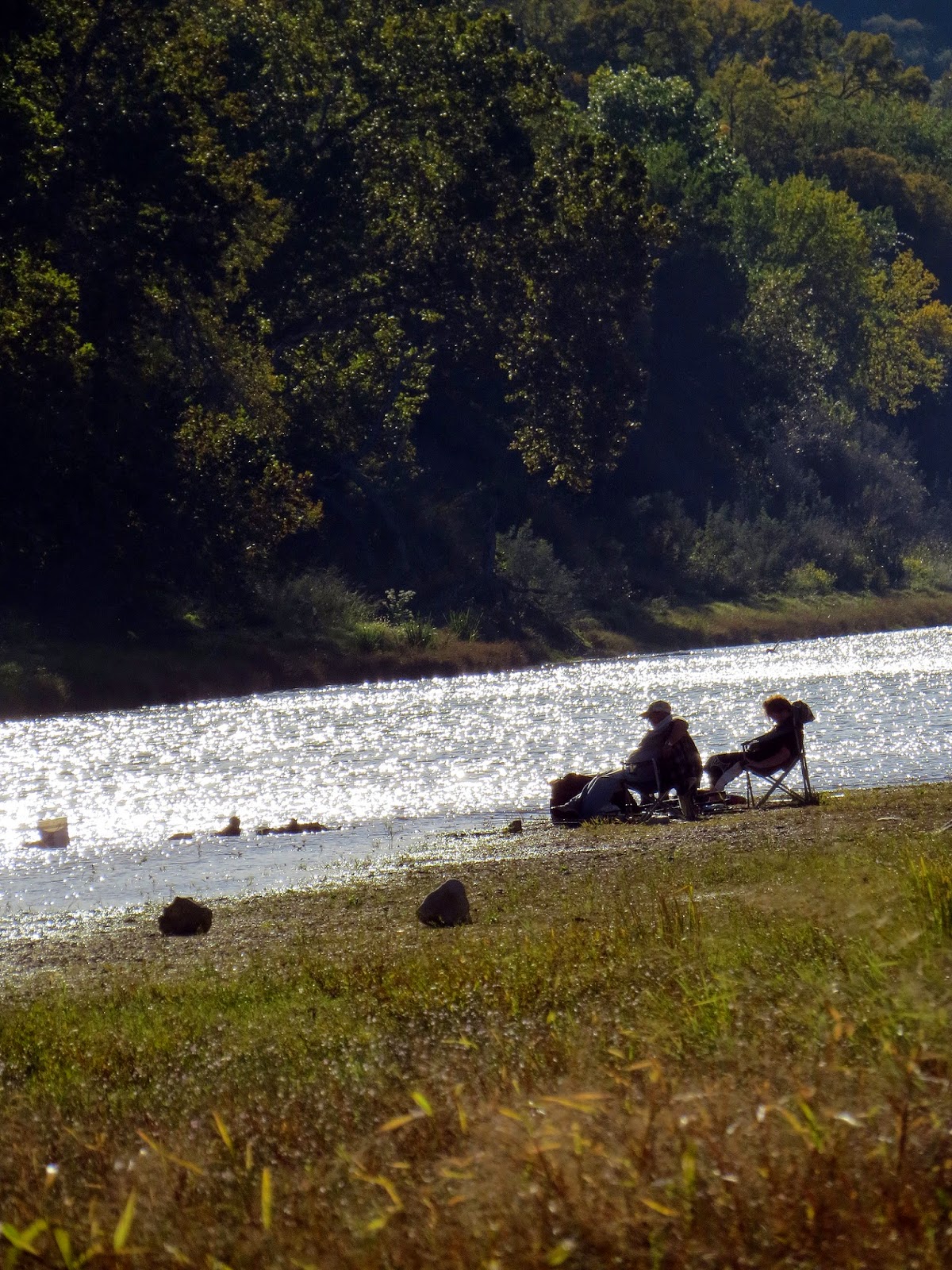 I'm also told that the low water flow of the past several years has created a bar across the mouth of the river where it empties into the Gulf of Mexico that has been preventing some of the game fish from entering the river to spawn. Though that has obviously not deterred these determined fishermen.