Finally! Installed a much needed mod to the solar system.


How do you safely remove power coming in from a solar system?

1) Wait until dark
2) Climb up on the roof and throw yourself, or better yet, a thick moving blanket over the panel
3) Flip the disconnect switch (Oh, you don't have one of those?)

OK, First, before we go any farther down this slippery road, why would I want to remove power coming in from my solar panel in the first place??

Well I have my reasons, and a prime example was when I recently replaced the house batteries. Even with the batteries disconnected the solar panel kept the whole system energized and I had to tape wires-ends and be really careful about joggling them when doing things like lifting the batteries out of their boxes or cleaning the terminal ends of the cables.

Having worked with electricity of all sorts for most of my life has not made me complacent. If anything, since I know all too (painfully) well the consequences of letting those dang electrons run loose where they shouldn't, I'm hyper-careful around the stuff. (A few weeks ago my former workplace suffered an electrical explosion that blew three large commercial overhead doors right out of the building and destroyed about 2.5 million dollars worth of equipment! Fortunately no one was in the vicinity at the time so the 2000 degree plasma cloud originating with the high-voltage arc-flash created when something went terribly wrong only destroyed things and not flesh and bone!!) So having the ability to completely and safely de-energize the electrical system, including whatever the solar panel is contributing, would be a much more comfortable way to go.

A not so obvious reason, actually probably a pretty obscure reason, for the ability to quickly remove the solar panel from the equation is when boon-docking.

I know, I know; that makes no sense at all. But actually it does if you have a few cloudy days and your batteries get depleted down towards the danger zone (50% charge) and you want to boost them back up a little via the engine alternator.

Simple and straightforward, except when there's a solar panel keeping the voltage on the house side up above the switching threshold of the isolator. In that case you can run the engine till you're blue in the face, (Of course if that happens I recommend opening a window; fast!) but until a passing cloud or a large and obliging bird looking for an unlikely resting place causes the solar panel voltage to dip below threshold long enough,  all that internal combustion will not be adding anything to the house batteries. (Sometimes you can cheat the system by turning on all the 12 volt devices you can reach to temporarily drag the voltage down, but of course you are also sucking precious juice out of the batteries at the same time and that just seems wrong. . .)

I should have known better but didn't realize this was happening until several years ago when I was boon-docking deep in a shady canyon. There was enough light on my panel to keep the voltage up but not enough to generate any significant charge current. On the fourth day of a planned 6 day stay I fired up the engine and tweaked the idle speed up. At the state my depleted batteries I should be getting at least 30 to 40 amps of charge off the engine, except all I was getting was the half amp from the solar panel and a few dollars worth of burned up fuel! I ended up digging under the driver's seat until I exposed the isolator then very crudely shorted around it with one side of my jumper cables. Not a process I want to repeat any time soon.

If you are going to charge the batteries off the engine alternator while parked you will need to boost the engine RPM's up to around 1500 to get decent current out of the alternator which will greatly reduce charge time. Sprinters sold for ambulance duty (Ambulances use lots of power while sitting at an accident scene.) have an idle speed switch that can be used to bump the idle speed up this high. I would have to send my Sprinter back to Germany to have this installed and I'm pretty sure that's not cost effective! So instead I have an adjustable 'idle stick' that hooks to the steering wheel and pushes on the accelerator. I then tweak the adjustment to get 12 to 15 hundred RPM out of the engine and 30 to 40 amps out of the alternator.


End of side bar.

And now for a disclaimer: I'm not an expert!! What follows is not a how-to but rather just a description of what I did.


So, after having plans to rectify this situation, and successfully procrastinating for quite some time now, I've finally installed the fix, which is a simple single-throw, single-pole switch installed between the solar panel and the solar charge controller. With a flick of this switch I can completely remove the solar panel from the system. (Electrically that is.)

In this case, since the most my solar panel will output is 8 to 10 amps and there's no more room on my small roof to add any additional panels, I used a switch rated for 12 Volts at 20 Amps that I just happened to have in my parts bin. Using a switch rated for more amps would be no problem but I would hesitate to use one in this application rated for less than twice the expected current; that's just cutting the safety factor down a little too far for me.

I'd also like to point out that in the photo above there's a red and white tube of GB Ox- Gard. This is a conductive anti-oxidation grease that I use on all my electrical connections, especially crimp-on's. A one ounce tube costs a few bucks and will coat one heck of a lot of connections, and in my opinion is a must. (If you use this stuff remember, it's conductive, so just make sure you don't spread it any farther than the connection itself!) 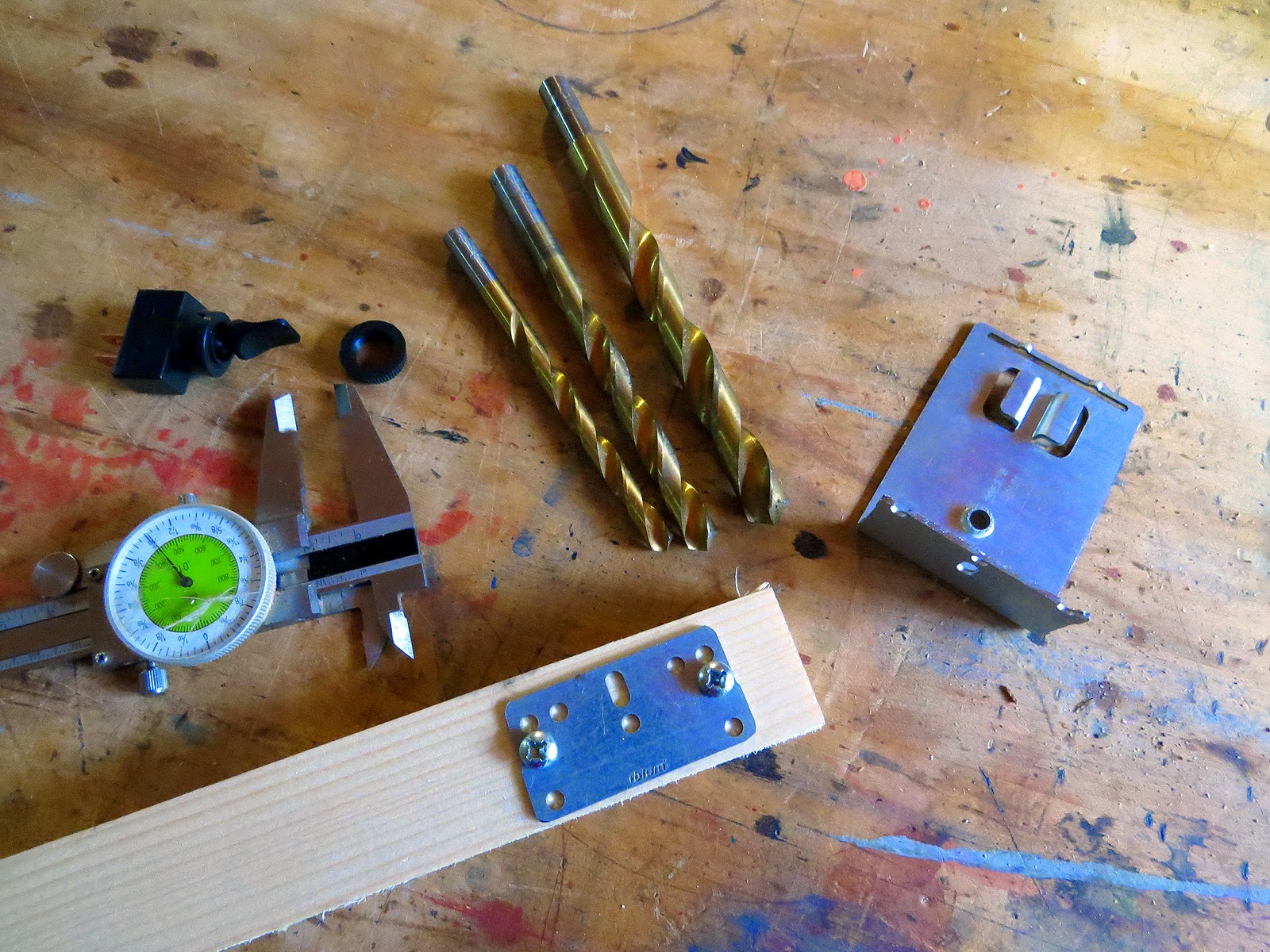 The switch is designed for mounting in a thin panel but in my case I needed to install it in 1/2 inch thick wood. So I hunted around in my scrap box and came up with a metal bracket designed for mounting drawer slides to the back of cupboards. (I have a whole mess of these things laying around.) I cut off one end, complete with pre-drilled screw holes, and temporarily mounted it to a scrap of wood so I could control the dang thing while drilling through it on the drill press to enlarge that hole right in the middle.

The mounting barrel of the switch is 7/16 in diameter. In order to keep the hole in the mounting plate reasonably round I drilled it in stages, starting with two progressively larger bits before getting  to the final, 15/32 drill bit.

A touch-up with a metal file to settle any sharp edges and a shot of a quick drying black spray paint finished up my new mounting plate. 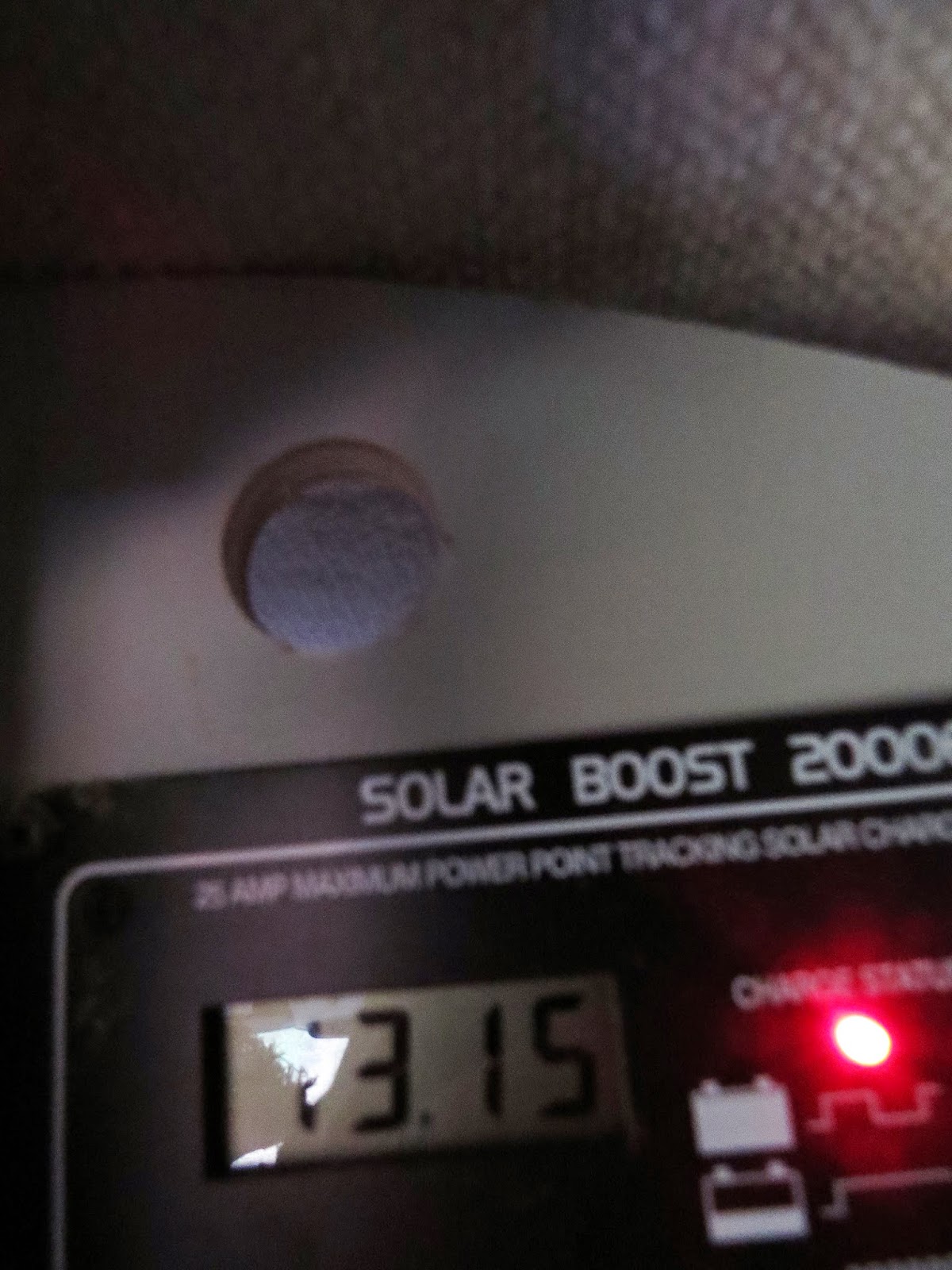 The body of the switch required a 1 1/8 inch clearance hole through the panel I want to mount the switch in, which I drilled with a Forsner bit, drilling in part way from one side and finishing from the other so there would be no breakout. 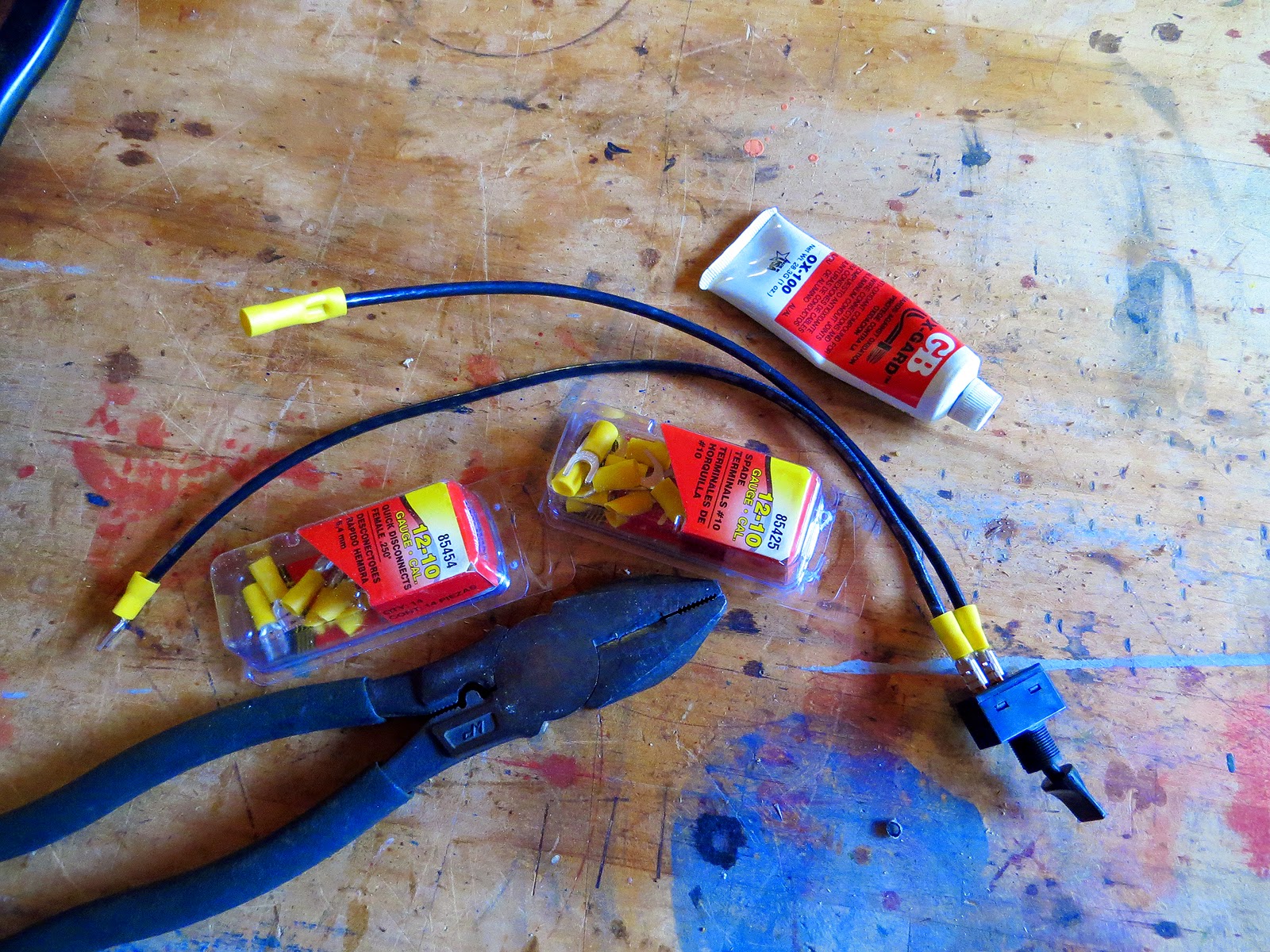 With that done, and while waiting for the paint on my switch-plate to dry, I prepped the wiring. Using AWG10 wire, (Sufficiently large enough for the currents my panel generates.) I crimped female disconnects to the ends of two separate pieces of wire. These will slide onto the male disconnects of the switch.

The free end of one of these wires got a spade or fork terminal which will connect to the terminal strip on the charge controller.

The end of the other wire got a barrel splice.

At the charge controller I disconnected the positive wire coming in from the solar panel and replaced it with one of the wires from the switch, the one with the spade or fork terminal. (Either wire,positive or negative would work equally well, I just like to keep things standardized and always switch the positive side of DC circuits.)

After cutting the original spade terminal off the positive wire coming from the panel and stripping it back, I crimped it into the other end of the barrel splice and hence, to the other side of the switch.


After testing, the switch was pushed through the large hole in the wood panel and fastened to the mounting plate I had fabricated earlier.

Making sure the switch was oriented so that up is on and down is off, just like most light switches, I then screwed the mounting plate into the wood panel. 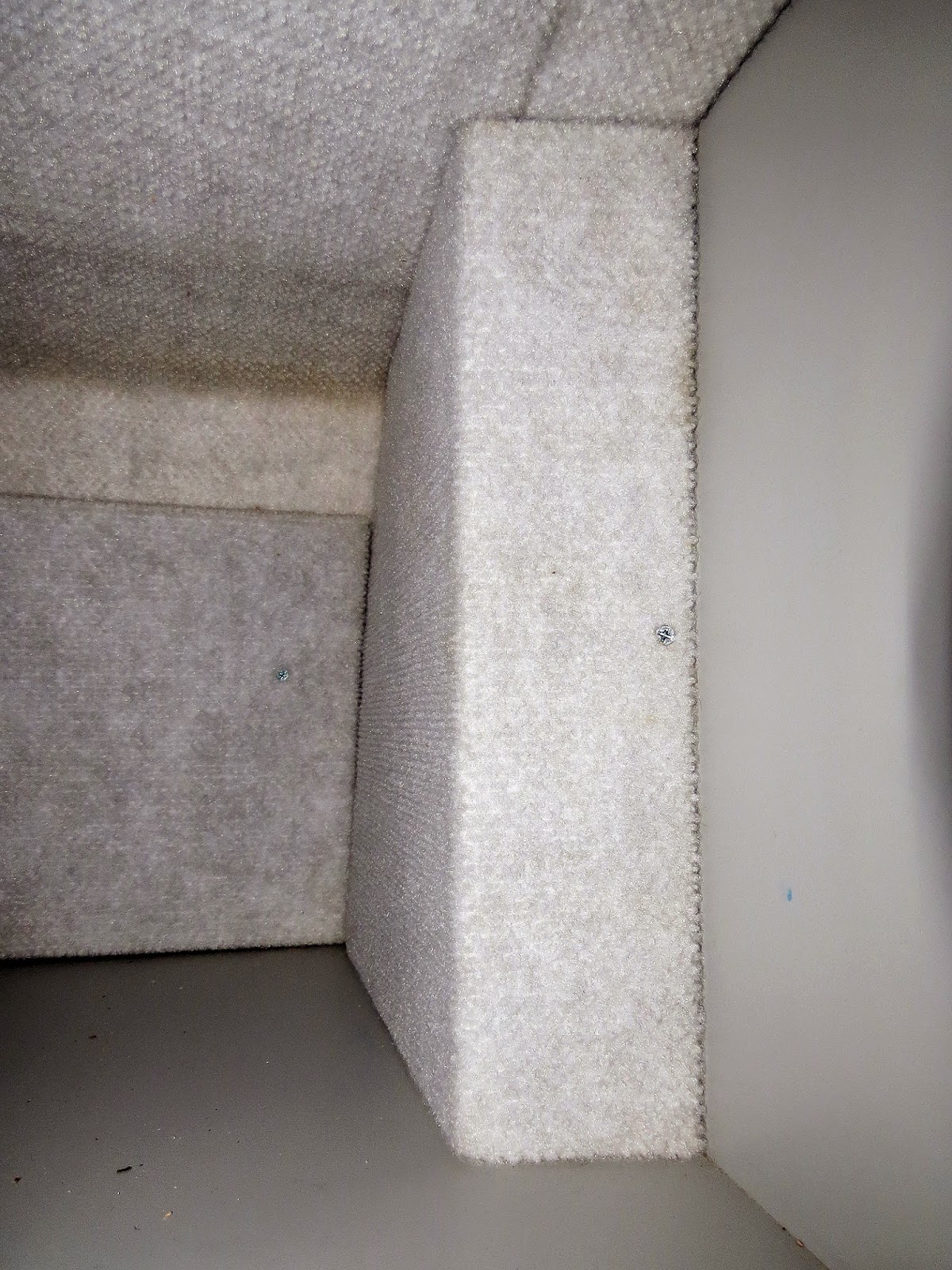 After that it was a simple matter of replacing the protective cover over the back of the solar charge controller so nothing stored up in that cupboard goes knocking into it.


Now I can easily switch the solar panel out of the electrical system. When switched off, the only spot I have to worry about live electricity from the panel is at the one side of this switch, which is well up out of the way and pretty difficult to accidentally come in contact with. (Of course just because it's difficult doesn't mean it can't happen, but at least this way if it does happen I deserve what I get. . .)

Of course, now I've added a manual component into what was a largely automatic system, making it my responsibility to ensure the switch is in the proper position; on for most of the time, off for system maintenance and reliable charging from the engine alternator. This opens up the real possibility that I could leave the switch off when I shouldn't, but since I make frequent checks of all my systems that's an oversight that would be quickly spotted.

Besides, I'm of the opinion that we have abdicated far too many everyday functions to automation which, while it may seem to be a simplifying of our lives, all too often sets us up for failures and disasters that didn't have to happen. (Three Mile Island happened because over-reliance on a remote valve-position indicator had eliminated visual checks of the actual valve position!!!)